Ian Russell reflects on another action packed month of fishing with some highs, some lows and a ghost carp named Casper! Here’s what Ian had to say…

Well, what a brilliant month October has been for me! Lots and lots of fishing done for work and some lovely results along the way.

My Total Carp monthly Trouble Shooter feature was on my local Twynersh venue and myself and Chris chose to go on Lake 7 for our 24-hour trip. 15mm Monster Tiger Nut baits along with lots of Dynamite 6mm Halibut pellets and XL Sweetcorn never fails me and it did not on this trip either.

Chris even utilised his 40-metre baiting pole to take a cracking 25lb mirror. In all we took five carp for the feature and Chris even made a dent in the bream stock as well LOL. 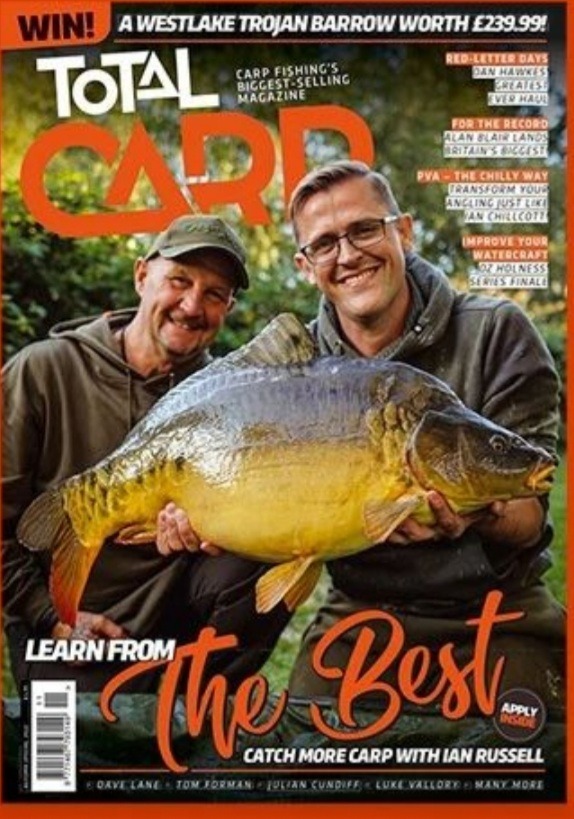 The trip was so good, it was worthy of featuring in Total Carp!

I then had a 24-hour tutorial booked at one of my favourite venues…that being Fryerning XL Fishery in Ongar, Essex. My client Richard had literally only just started carp fishing but I soon had him in full swing…casting accurately and sorting his own rigs out.

We went onto the lovely Valley Lake which I really like fishing as it is usually very kind to me – this trip was no exception. During our trip I ended on five carp including a pure white common I named Casper, although I know it has other names as well! 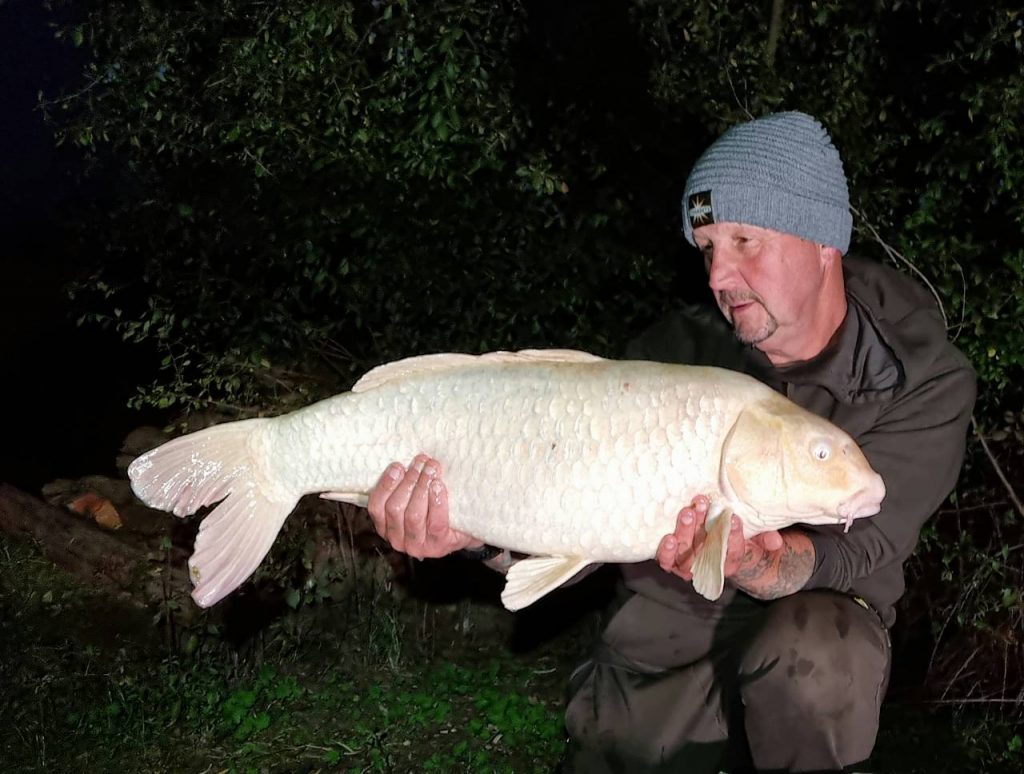 No guesses for why this one was called Casper!

My largest was an incredible-looking 32lb mirror that I really wanted after seeing a client’s wife catch it a couple of years previous. 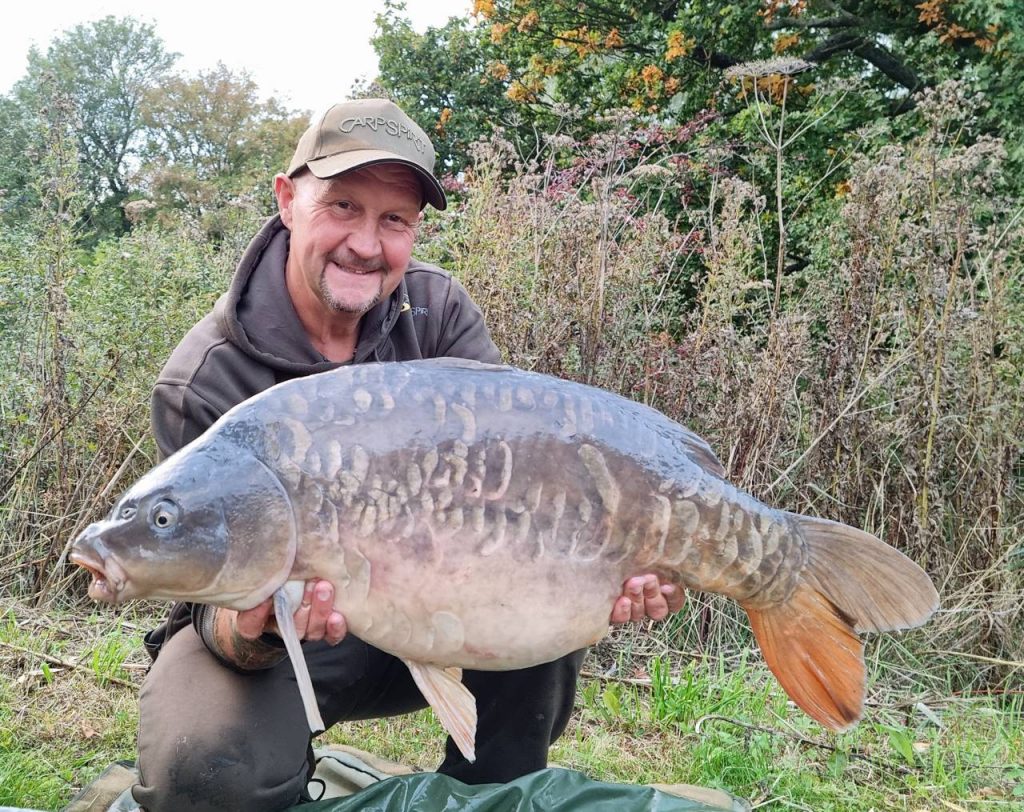 Ian had been after this one for a while!

Richard chipped in with a 22lb Common of which he could not believe the size of, and he had this straight after Casper and before the 32-pounder. The same tactics I always apply on there turned up the goods yet again for us. That being 12mm Monster Tiger Nut baits with Sweetcorn added and a size 6 Barbless Beaked Point Razor Point Ronnie rig. 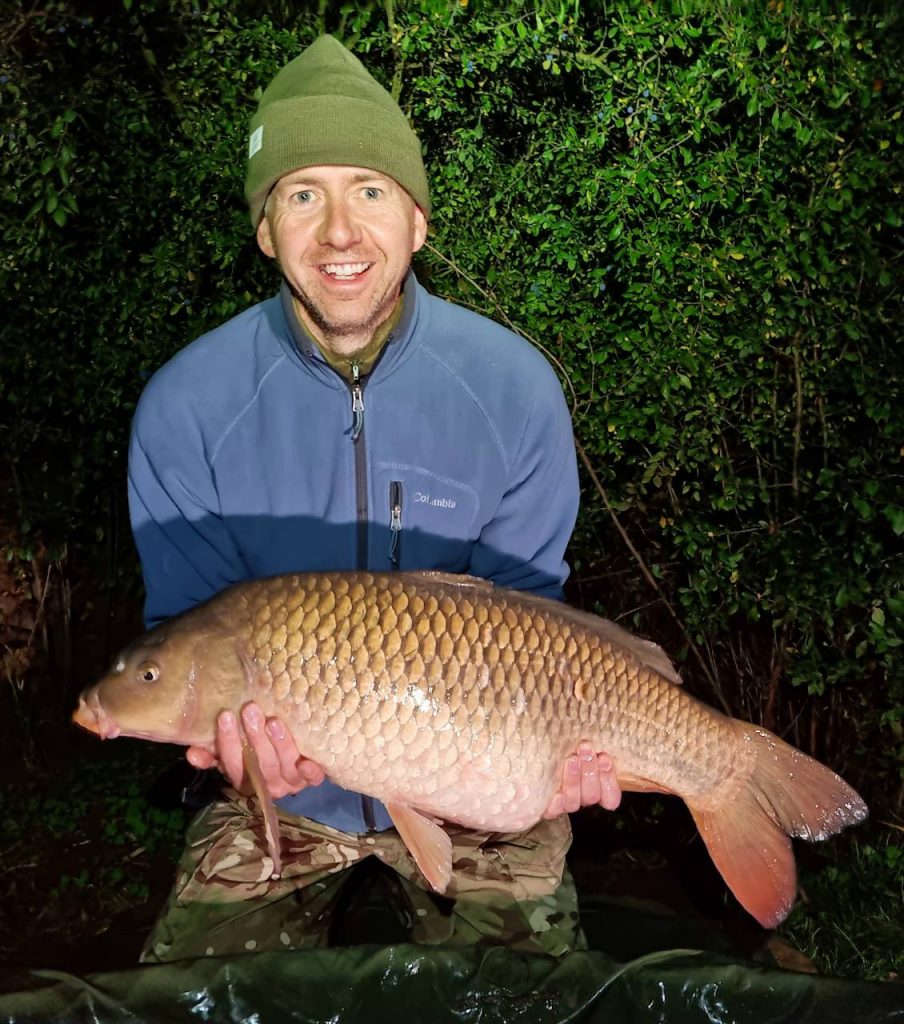 Richard was over the moon with this 22lb common

Next up was a trip I had really looked forward to and that was a visit to Combley Lake on the IOW with Cypography‘s Richard Stewart. This was to be a 3-night filming trip on the Main Lake.

The trip involved the first frost of the year and lots of swim moving, not to mention a 10 hour torrential rain storm! Using Lots of Dynamite sweetcorn and yes, it’s getting boring, but my fav Monster Tiger Nut 12mm baits.

I kept chasing them down which ended in a right result for the film. This will be available On the Cypography site sometime near the end of November I believe. Suffice to say I cannot recommend these lakes enough. Pitch black at night and ghostly silent. Oh and the Spitfire aircraft periodically passing overhead just added to the magic of this trip. Thanks to Will the owner for making the venue available to us.

This pretty 27-pounder helped make the IOW trip a success!

Now I have just returned from what became one of the most frustrating work trips of my life with the guys at Total Carp.

Andy and myself were working on the Point of Brasenose 2 and I then had a back to back tutorial with Clyde booked. The lake was extremely busy as you would expect this time of year and most of the carp stock were at either end of the lake with us sitting twiddling our thumbs in the middle section.

Constant messages from friends at either end added to the frustration of not being able to move anywhere near the fish.

Those that know me well will know if I had hair I would have pulled it all out as I do not sit idle in my fishing at the best of times. Eventually a couple of Billy no mates carp slipped up and I managed a couple of 20s to 28lb. I have never been so relieved to scarper off home!

A frustrating trip was just about saved with this 28lb mirror…

Abbey Lakes is my next fishing adventure with a good friend of mine Keith Skelley and we are having a few days on Fox Lake. The last time we visited Abbey was just prior to the Covid situation arising.

That trip was on Heron and it produced my PB of 62lb so lets see if we can beat that shall we! I shall keep you informed.

Until next time be safe and Tight Lines.