In this month’s diary, Ian reflects on a superb start to the year fishing his favourite Wraysbury 1 North Lake. Winter sessions just don’t get much better than this… 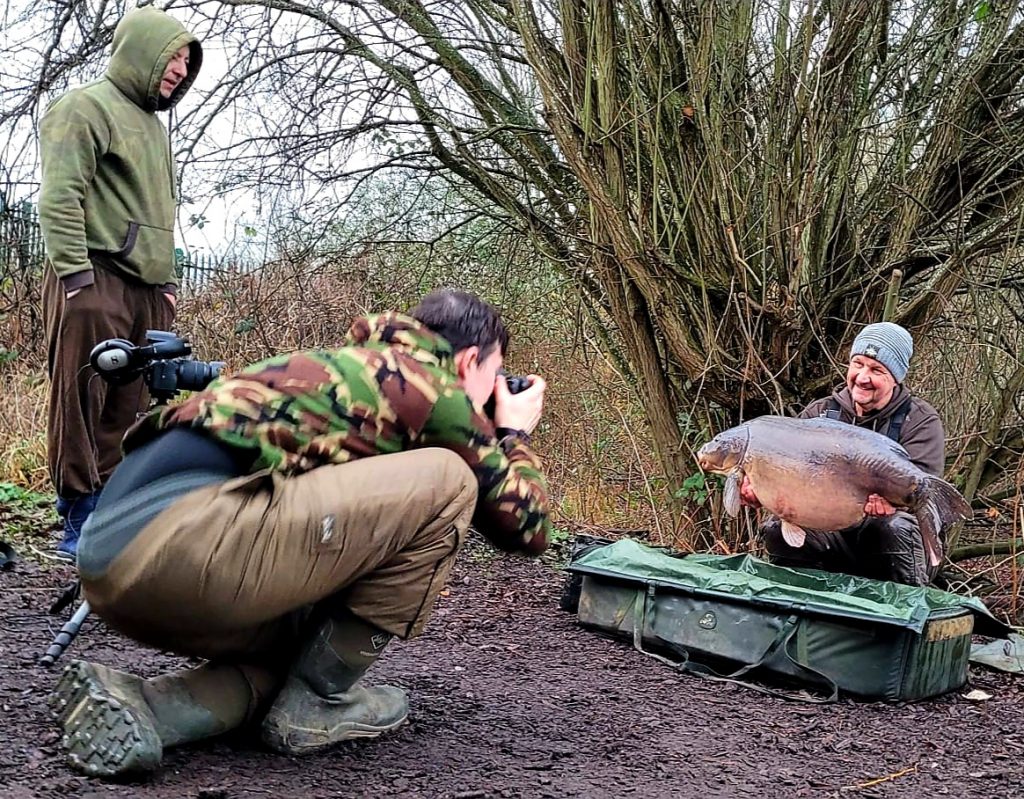 “Well, my carp fishing on Wraysbury 1 North Lake in 2022 could not have gotten off to a better start. W1  was always going to be my chosen Winter venue for my personal fishing regardless off how tough it was going to be.

On January 2 I arrived for a couple of nights and as I walked the lake in the darkness, in front of the Plateau swim I heard what was music to my ears.

Carp after carp were slinging themselves clear of the water, so the barrow was loaded and after an imaginary race (we have all done it), I was soon setting up in the Plateau.

Knowing the peg can be mega in this situation, I soon had a couple of Pineapple & Banana pop ups deposited to where they needed to be.

On went the kettle and I sit back smiling in anticipation of what was to come.

About an hour had passed and the right-hand bait was picked up. A crazy battle ensued which I’m glad to say I eventually won and a lovely VS mirror of 29lb was netted and soon being photographed. 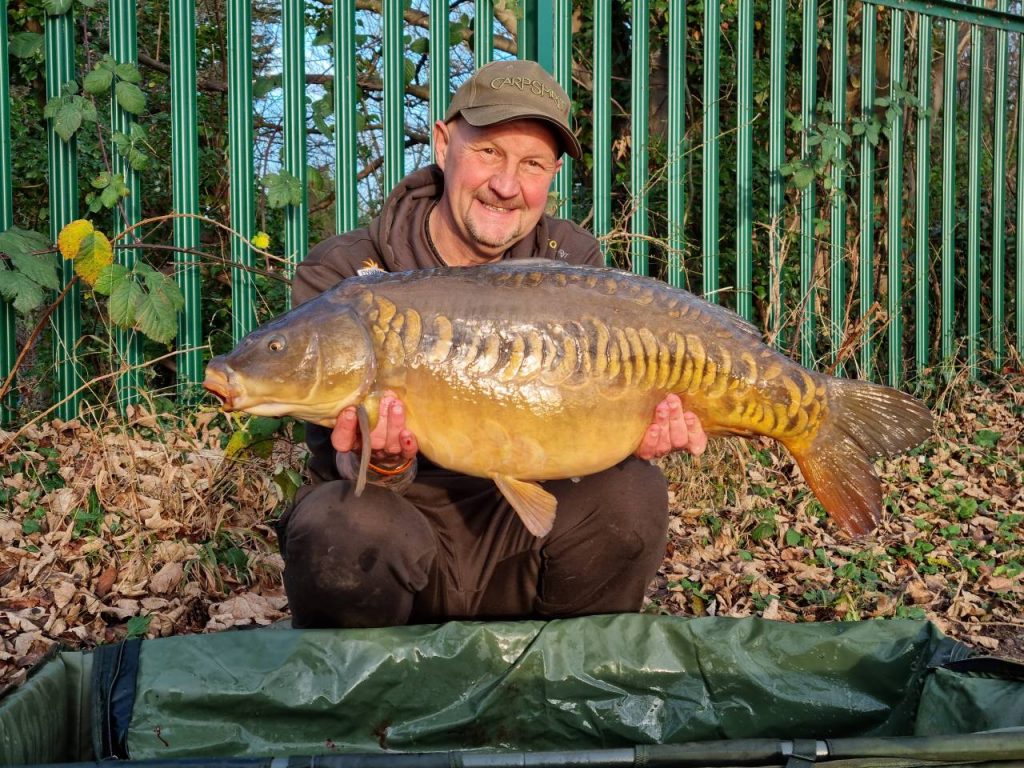 Not a bad way to kickstart your year. 29lb of stunning W1 North Lake mirror!

This obviously was enough disturbance to scare the rest as I received no more action so the next morning I moved to the far end of the lake, but this move was to no avail. 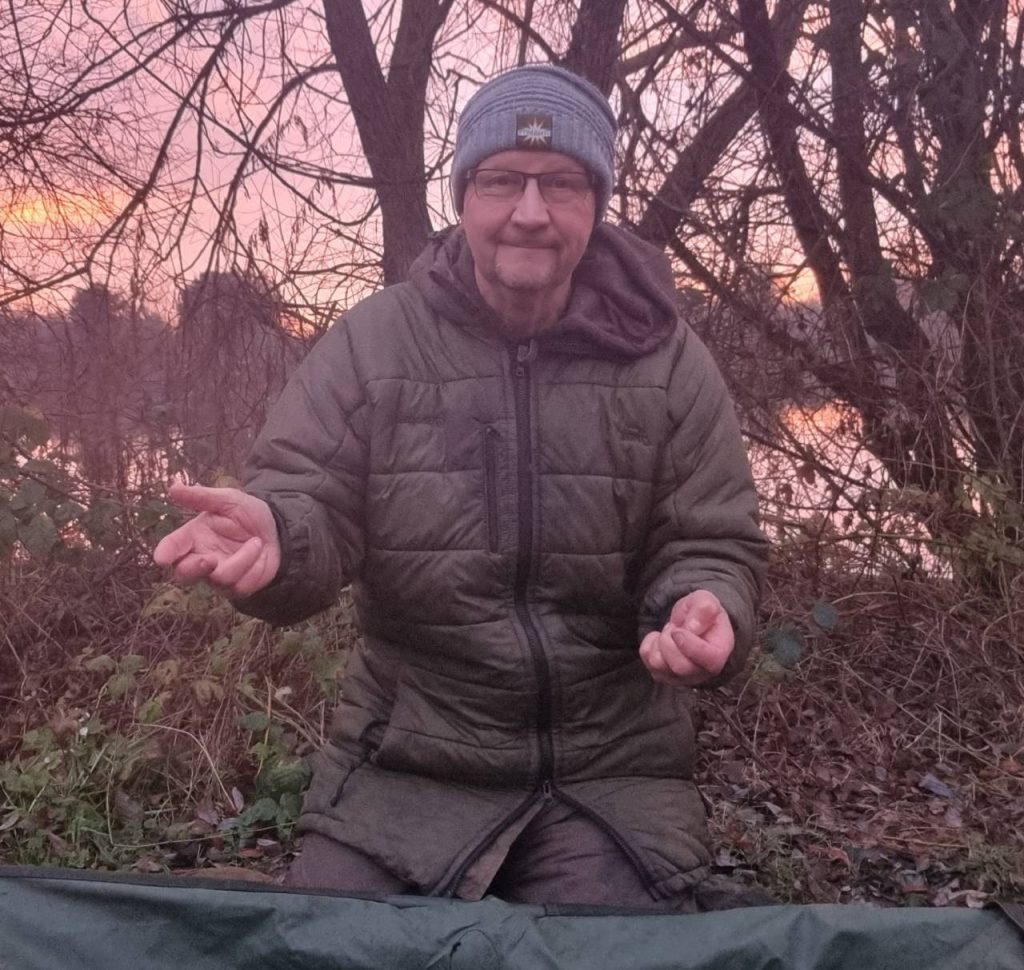 A quiet lake gives plenty of time to practice those poses!

I then slipped in a Total Carp feature before my next trip which was great fun catching hoards of smaller fish but my mind was well and truly set on a return to W1.

We had the grandchildren that next weekend and by the time Sunday dinner was done and they all left, I was absolutely clucking to get back over to the lake.

Arriving at 4pm with darkness not far away, I dropped into the Runway swim which had produced four carp that weekend to Welsh Paul.

Now as Paul was fishing very far out and much to far for me to bother trying accurately! So, I opted to fish a lot closer in on an area that had produced a lot for me in the past.

I quickly Spombed out a dozen payloads of Frenzied Hemp and Sweetcorn and placed 2x rods on the newly released 12mm Monster Tiger Nut pop ups and 1x rod on a Yellow Hit n Run pop up.

At midnight I was woken by carp crashing but considerably closer to the bank than where I was fishing, so again knowing the spots I reeled-in all three rods, wrapped them closer then reset them before adding 12 Spombs of Hemp and Sweetcorn over the top.

Within the hour I was away but the hooklink cut almost immediately (harsh). After resetting the rod in the cold, I was soon back in the bag but awoken at first light when the Yellow Hit N Run rod was away. A nice 24lb mirror was the culprit. 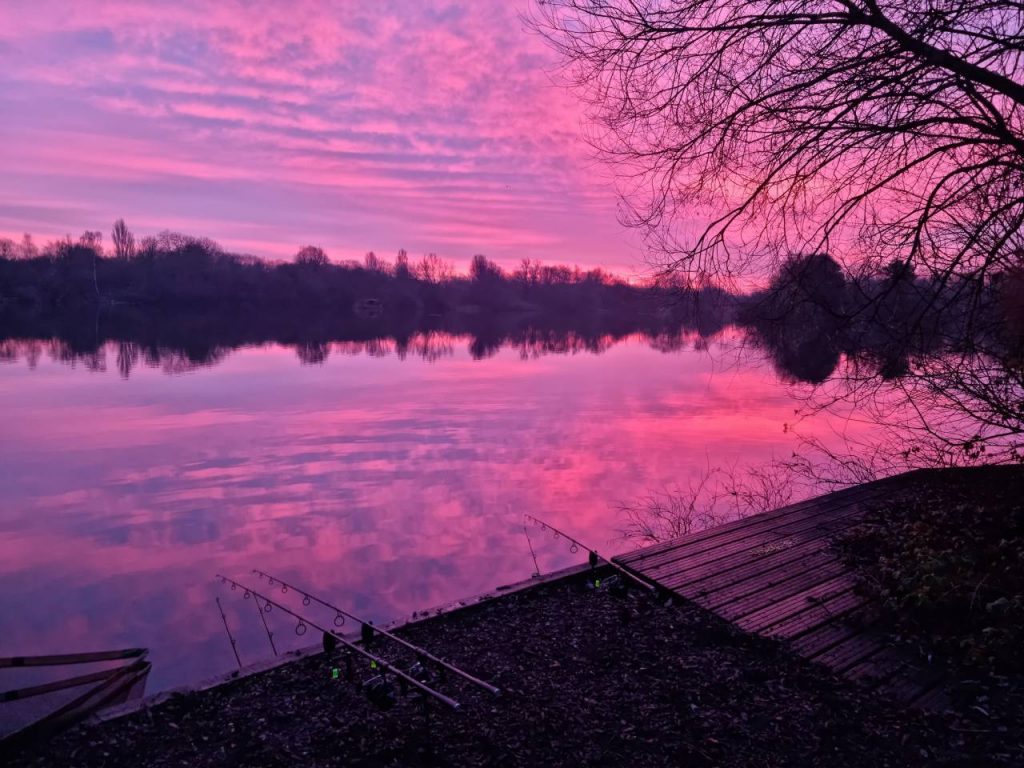 A simply stunning dawn on the North Lake. This is part of why we go carp fishing.

I reeled in at around 10am and went wandering for a few hours around the lake.

When I returned I very accurately placed all three rods close together and put out a whole bucket of my Spomb mix over the top of them.

At 10pm the liners started and at 1.30am I had a double take. The first was a mid-20lb common which wrapped the other two lines up whilst it was still going off.

Once netted I picked up the second rod and the carp promptly fell off. (Harsh again).

All three rods were in a mess and after I returned the common, set about the task of resetting my leaders and rigs. By 3am I was again fishing and at 4.30am a 27lb mirror was had.

A good result and worth all the effort of re-rigging, but I had been up most of the night and was absolutely knackered. So after getting a few hours kip I was awoken at daylight by a really slow take on the middle rod.

This fight was much different to the others – rolling around on the surface all the way in and netted without any problems at all.

On first inspection looking I thought, wow a good 40, but then I rolled it over and could recognise the carp as ‘Mike’s Pet’ – the lake’s largest resident…

A couple of calls were quickly made and a small crowd had soon gathered. It weighed 54lb exactly and I was on cloud nice understandably. We even recorded it all for next month’s Total Carp magazine! 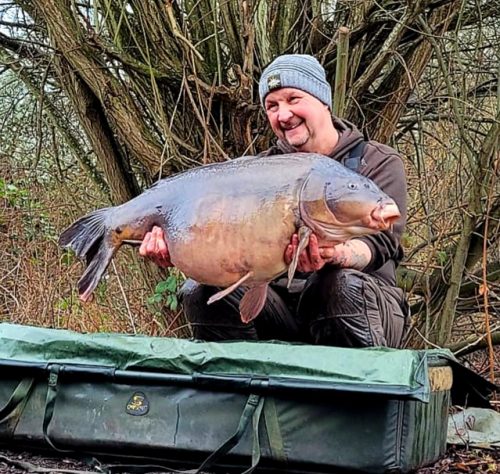 The largest resident in the lake. Mike’s Pet at 54lb dead. 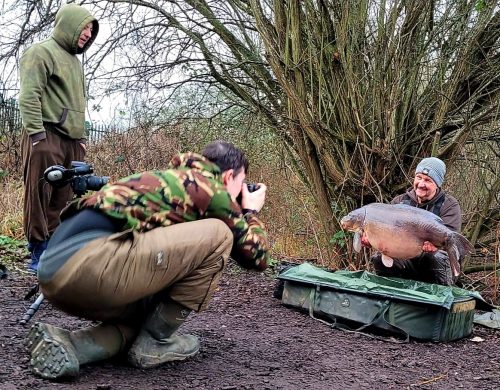 Time for a few snaps of the fish… 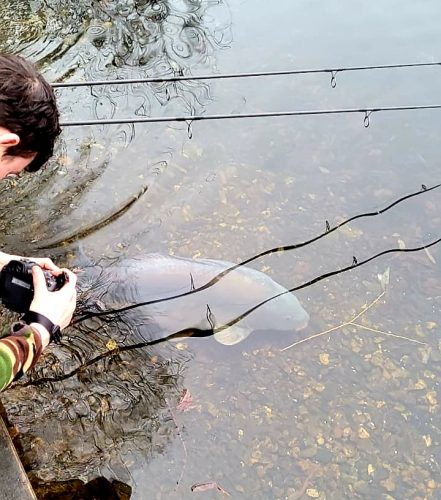 …before she swam away strong.

The day was spent floating around the lake and mid afternoon I replicated the previous days’ efforts and settled in for the night.

The temperature dropped well below minus and it was again at first light I received what was to be my last take of the trip. A lovely-coloured 30lb mirror. 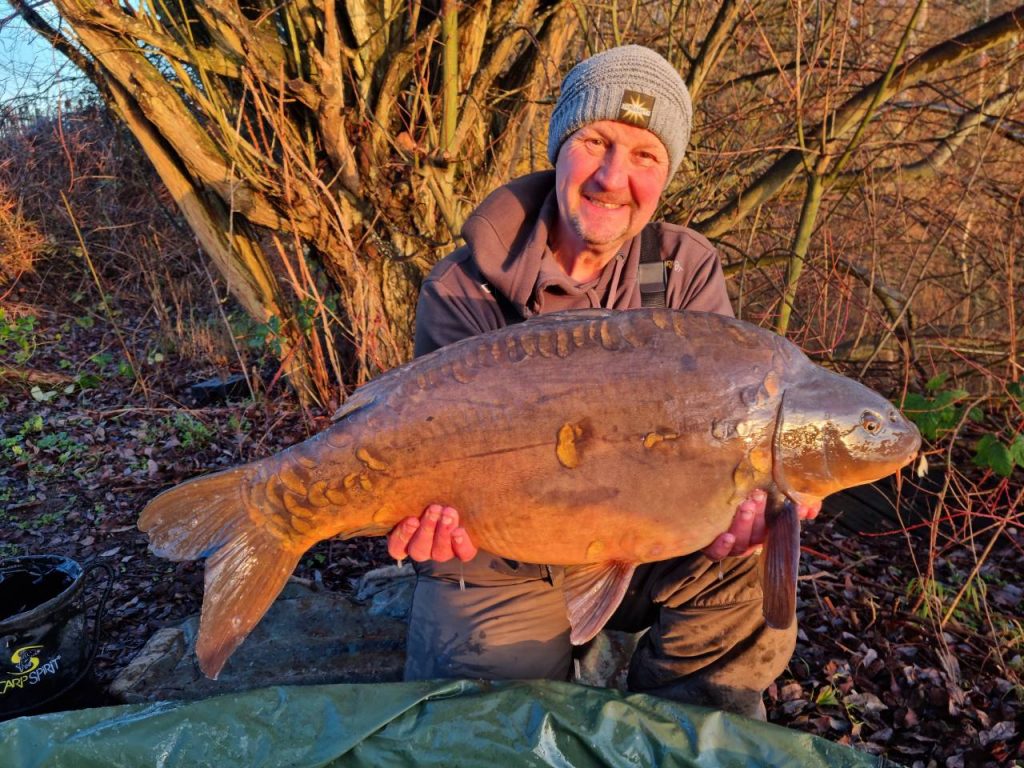 An incredible way to sign -off a memorable trip.

Just a few days ago I actually went back once more and managed one of the recently stocked mirrors. Talk about going from the largest in the lake to quite possibly the smallest lol. 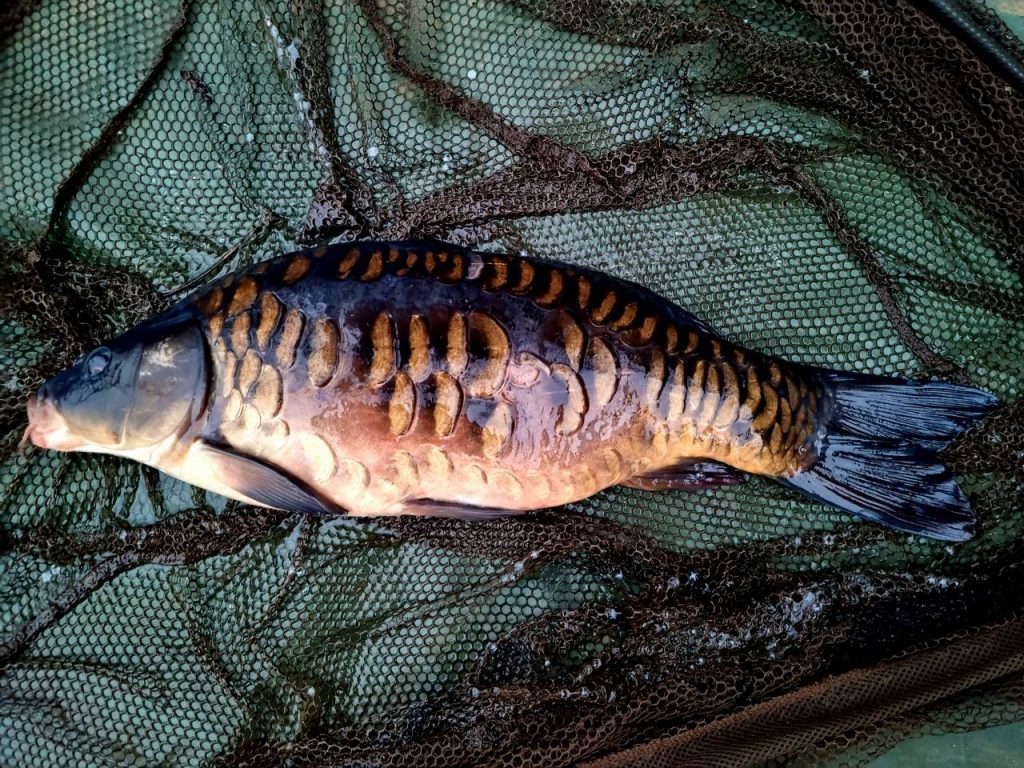 From catching North Lake’s largest to one of its smallest…

Tight lines one and all – Ian Russell.”