This month Ian reflects on a memorable New Year’s trip to RK Leisure’s prolific Wraysbury 1 North Lake where despite freezing cold conditions, he manages to kick 2021 off with a bang! But with a fresh lockdown imposed and a ban on night fishing enforced, how will Ian fair in his pursuit of RK Boat Pool’s Big Common? 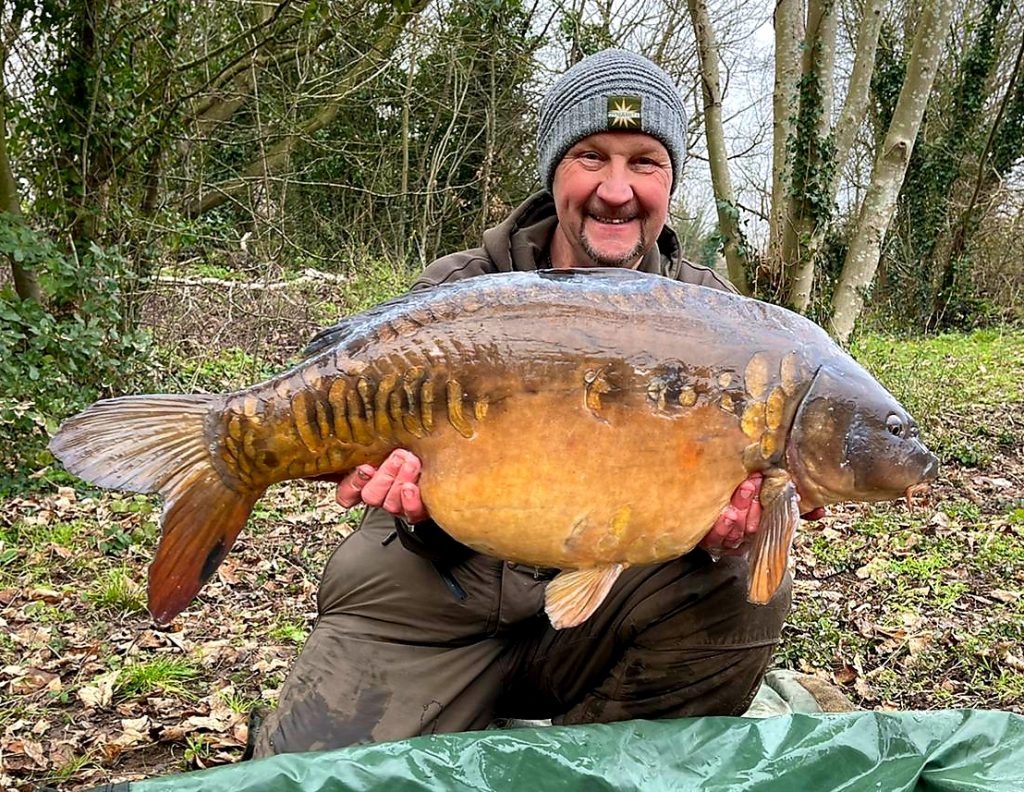 Happy New Year one and all!

My end of 2020 trip to Wraysbury No.1 North lake turned into something of a red letter session for me. I chose to set up in peg 27 the reason being is that I had seen a good few carp showing at range in front of here a few weeks ago. Anyhow, I managed to get in here and had three nights at my disposal.

It was December 30th and I know the swim quite well having fished it before in much warmer weather. Jake ‘The Chef’ was to my left in 26 and a few of the other members were dotted around the lake in various swims. I had a quick lead around and as per the hard area was at 30 wraps out so I deposited three kilos of crumbed Monster Tiger Nut boilies with a handful of 12mm versions of the same thrown in, as well as two tins of Dynamite sweetcorn.

I then set up three rods all with size 4 Medium Curve Carp Spirit Hooks carrying 15mm and 12mm Monster Tiger Nut pop ups. I fished two rods with 15mm hookbaits and the remaining rod had a 12mm version. These were launched with 4.5 oz leads to land nicely on the clip at 30 wraps out and all fell with a satisfying donk as they hit the lake bed. I have to add here that with 19lb Velocity mainline I was fishing at absolute maximum range.

The night was quiet and very cold but at first light I had a double take almost simultaneously and landed mirrors of 17lb and 21lb. 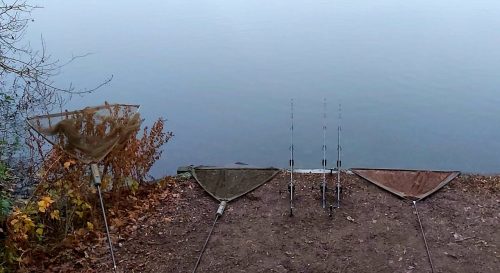 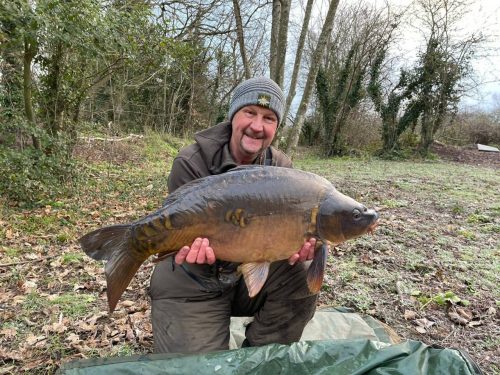 …with this 21lb mirror proving to be one of the culprits!

That revealed that my choice was correct and the carp hadn’t moved. By lunchtime I had also added mirrors of 24lb and 28lb 4oz. Late afternoon I Spombed out the same amount of bait again before I got my head down as even though it was New Year’s, it was sooooo cold! It didn’t seem to put the fish off though as at 11.45pm, the left-hand rod was away and after a right old tussle a big VS linear was netted. I woke Jake up for the pics and at 36lb I was well and truly chuffed. These carp really do love the Monster Tiger Nut range!

As I returned the fish at midnight there were lots of fireworks going off everywhere – obviously the entire world was happy for me as well (LOL). It was now 2am and the recast rod produced a 21lb mirror which I slipped back straight away as it was now absolutely freezing cold. 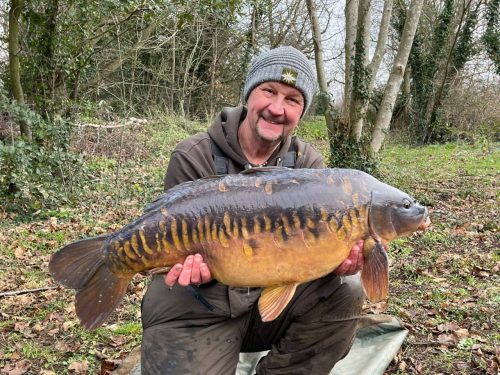 Another brace, including this stunning 28lber, was banked at lunchtime… 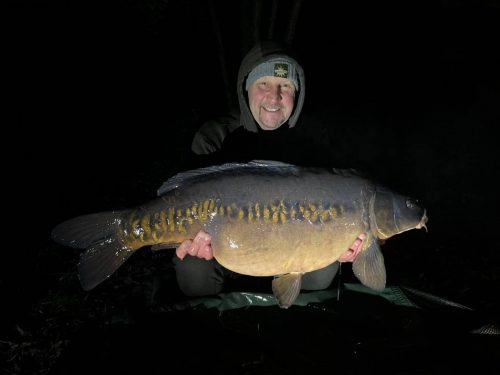 The morning soon brought with it a 26lb 4oz mirror and at lunchtime a lovely 33lb 4oz mirror – what an incredible trip this was turning out to be! I’d already had nine carp which was incredible considering the time of year. I again Spombed out the same amount of bait and settled down for the night. Introducing this amount of bait in the cold just showed the pulling power of it!

At 2am the left-hand rod was away again but this time the carp had found some kind of sanctuary – probably some thick weed. Unfortunately, after pulling and putting the rod down several times the leader cut. I guess I had been a tad lucky landing nine on the bounce so I couldn’t really grumble at losing one. That was to be my last take but what an amazing trip. Nine kilo of crumb, six cans of sweetcorn and a sprinkling of 12mm boilies used up in three nights. 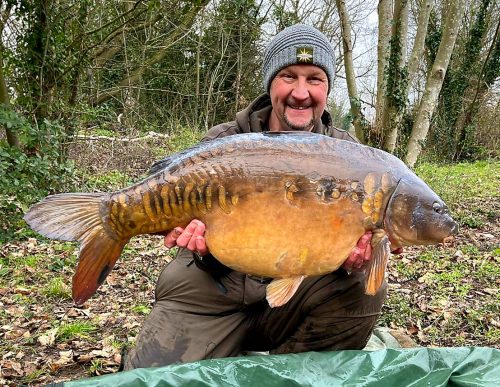 At this stage the dreaded lockdown arrived and fishing was limited to days only. 8am till 4pm was all i had at my disposal. I tried as did several others but the lack of anglers and bait going in had taken its toll and zero results followed within the six day sessions I had.

I then remembered a rather elusive (well to me anyway) Big Common which resides in the RK Boat Pool, so I again had somewhere which captured my interest. My first trip to ‘Boaty’ was with our Dynamite camera guy ‘Ginger’ Mike Tobin which was to double-up as a product photo shoot – with social distancing of course. The day produced nothing but the pool is quite a challenge at the best of times. Having had a really productive time on there last winter on the usual Monster Tiger Nut boilies it was a no brainer with what to use.

My next day session I was back to fishing alone and it was much more successful – producing four takes all of which were stock pond escapees of around the 5lb to 6lb in size. At least I had some action and all were returned safely to their original home in the RK stock pond.

The next trip again was a blank but I was beginning to see small movements and getting odd line bite. So armed with this knowledge I moved the rods to a different area and sat drinking coffee with fellow member Graeme. I should mention that I was using quite large PVA bags of MTN crumb as I did last winter. At 11.30am my luck was about to change and a blistering take saw me attached to a very angry carp.

All the time I was convinced my turn had arrived for the common as I had worked so hard for as this fish. It felt so heavy and stayed deep for ages! You can imagine my surprise when eventually, a very large mirror rolled by the net and I do mean a very large mirror. Vince had to wriggle it into the waiting landing net it was so long! A very excited few anglers gathered with their cameras and a weight of 42lb 8oz was soon registered on the scales. It was a day-session monster! This carp was known as ‘Big Viv’ and was last out at 42lb exactly. 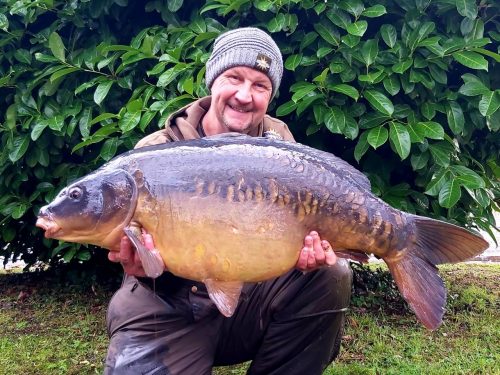 No night fishing? Not a problem! Ian proudly displays his daytime capture of Boat Pool’s ‘Big Viv’, which registered an impressive 42lb 8oz on the scales.

To say I was happy was an understatement. I stayed the rest of the day but that was all the action I had but I couldn’t complain. So, the Big Common hunt goes on for yet another winter…