A family holiday to Cornwall at the start of the month proved to be the calm before the storm for Ian with trips to Linear, W1 and Horton Church Lake occupying his busy schedule for the remainder of August. Here’s Ian Russell’s Diary entry for what proved to be another crazy month of fishing that was topped by an A-Team capture…

Firstly mine and John Flewin’s 4 x Seasons carping film shot at Nuddock Wood Fishery went live on YouTube and I have to say yet again John has done a superb job with this and it has been received really well by fellow carp anglers.

We do really enjoy making these and try and keep as much fun in them as possible. If you haven’t watched it already, you can watch the latest episode by hitting the link at the bottom of this page… 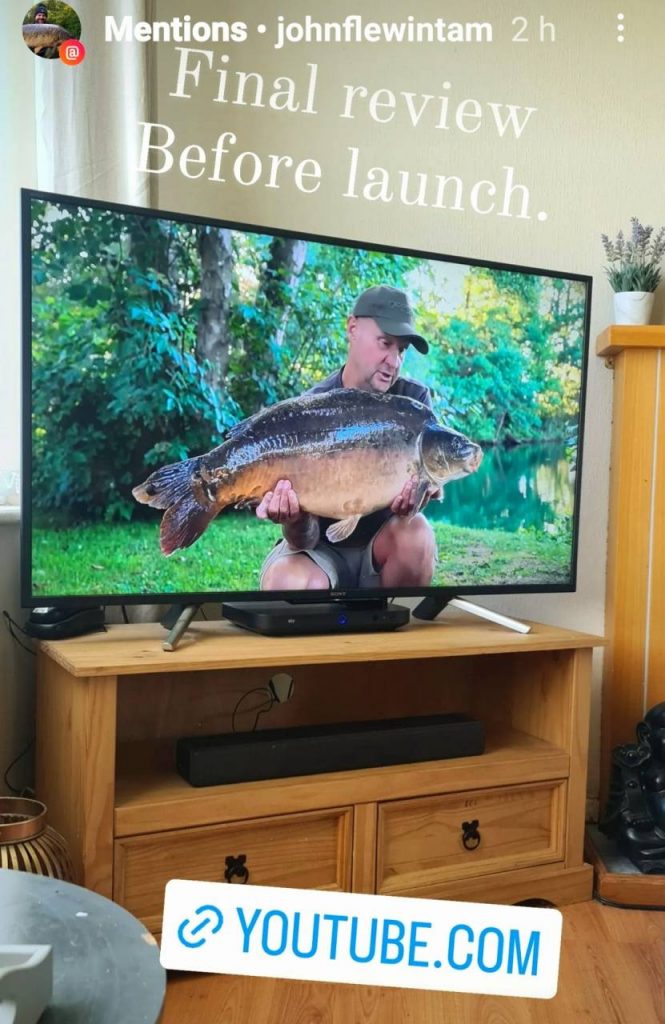 The family holiday we had in Cornwall with my Granddaughters Gracie Mai and Harriet was an absolute scream. My grandchildren really do complete my world. They even caught a few small carp from the little pool that we visited but on our return it was back to work… 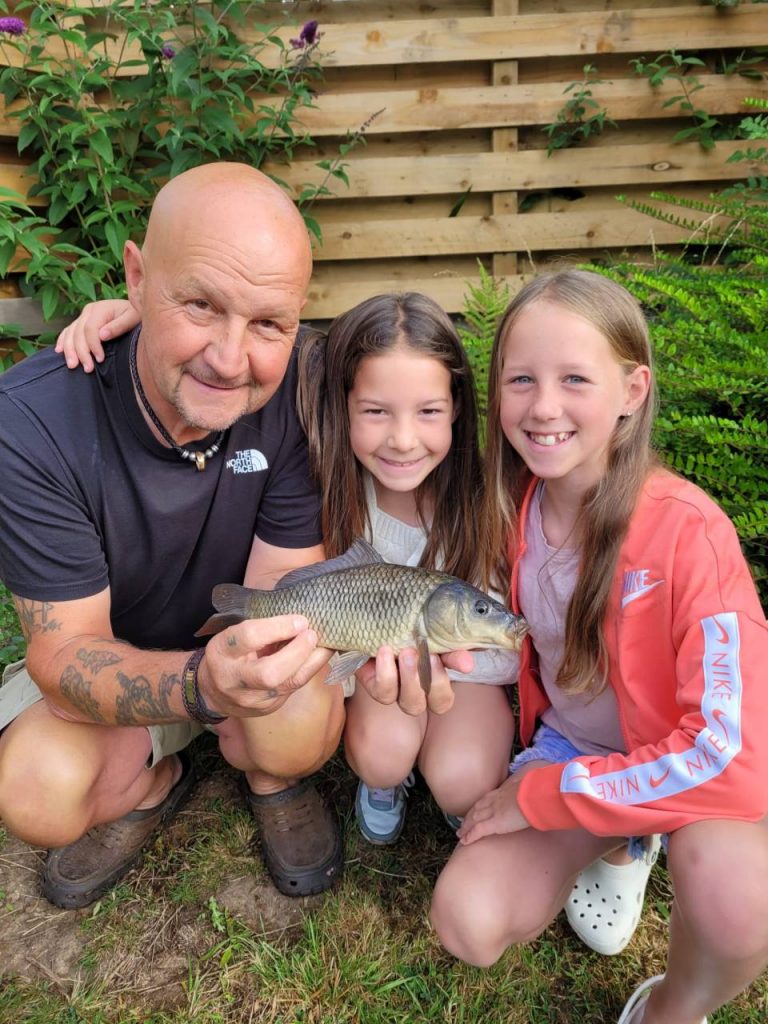 I managed a 24-hour trip over on W1 North Lake and although I was on numbers of carp I had just the one but at just over 20lb I certainly was not complaining. My usual mixture of 12mm CompleX-T and Spicy Shrimp & Prawn boilies mixed with our Frenzied Hemp and XL Sweetcorn is still my go to approach on here and it doesn’t let me down. 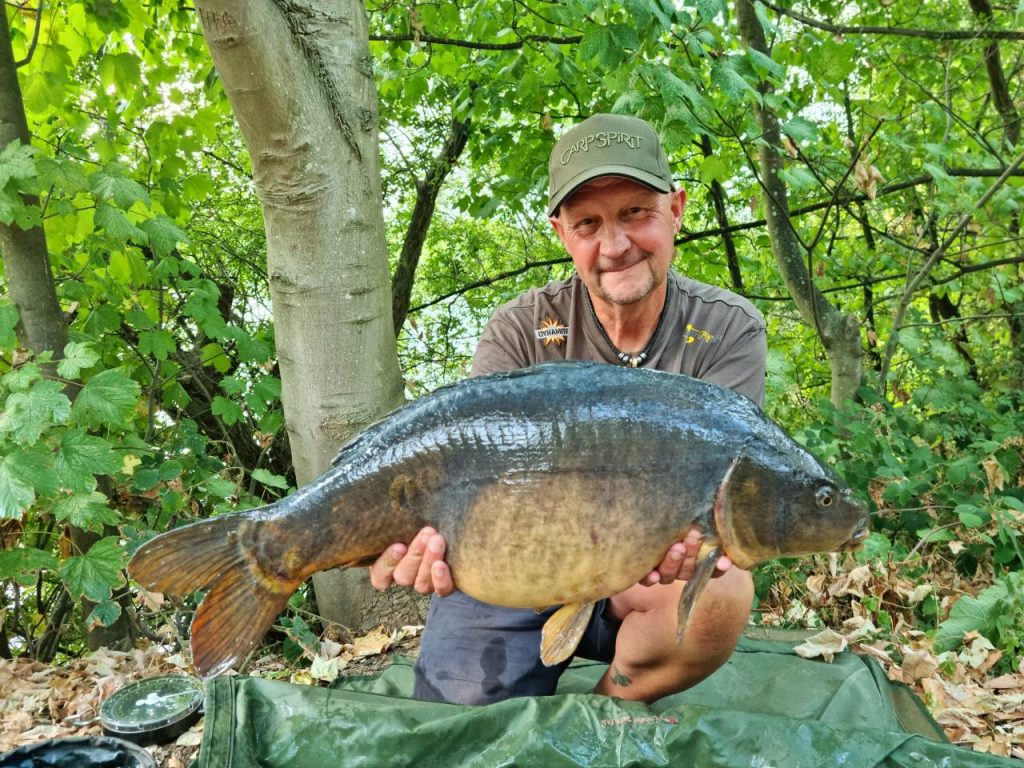 Next I had a 24-hour tutorial with Steve Coyle at Linear and as the day ticket lakes were rammed, Ian Roper kindly let us go on Yeomans for this trip.

Steve set up in peg 3 which fishes to the end of the island and I went next door in the Reeds. Lots of bumpy areas were located but we both opted to fish the softer areas. This may sound a bit strange but I do like to do things my way.

Now having fished the syndicates a lot a few years previously, I knew they liked their boilies so I brought along 5 kilos of 20mm CompleX-T and some Hard Hook baits. This proved to be the way forward as we were straight into fish! 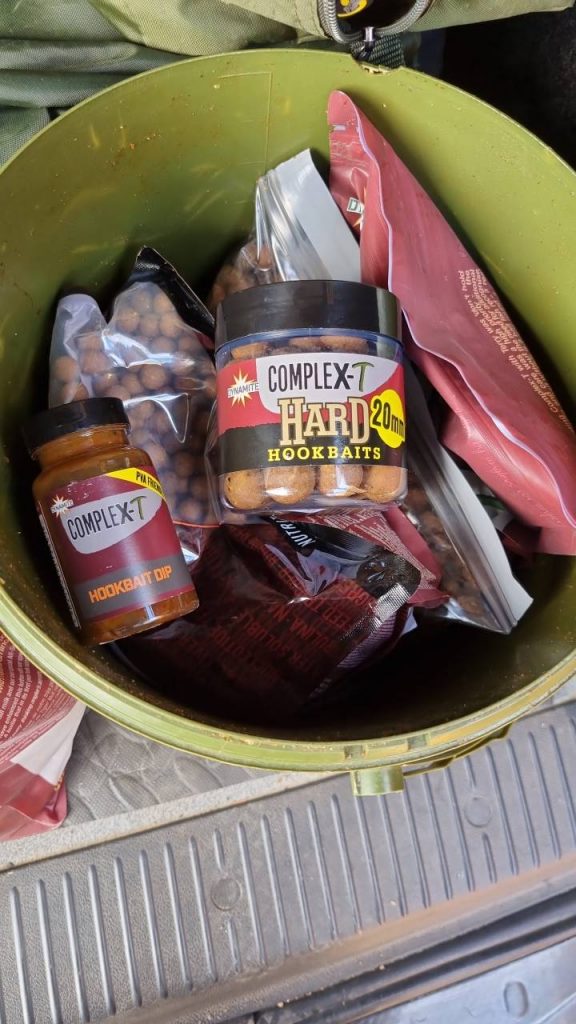 The unstoppable CompleX-T In 20mm. They loved it!

Now I had met Steve before a couple of times on my Total Carp Trouble Shooter Features and he is quite an accomplished angler but felt he needed to brush up on some pointers which is exactly what we did.

By home time we had landed 10 carp to mid 20s and had a thoroughly enjoyable 24 hours. 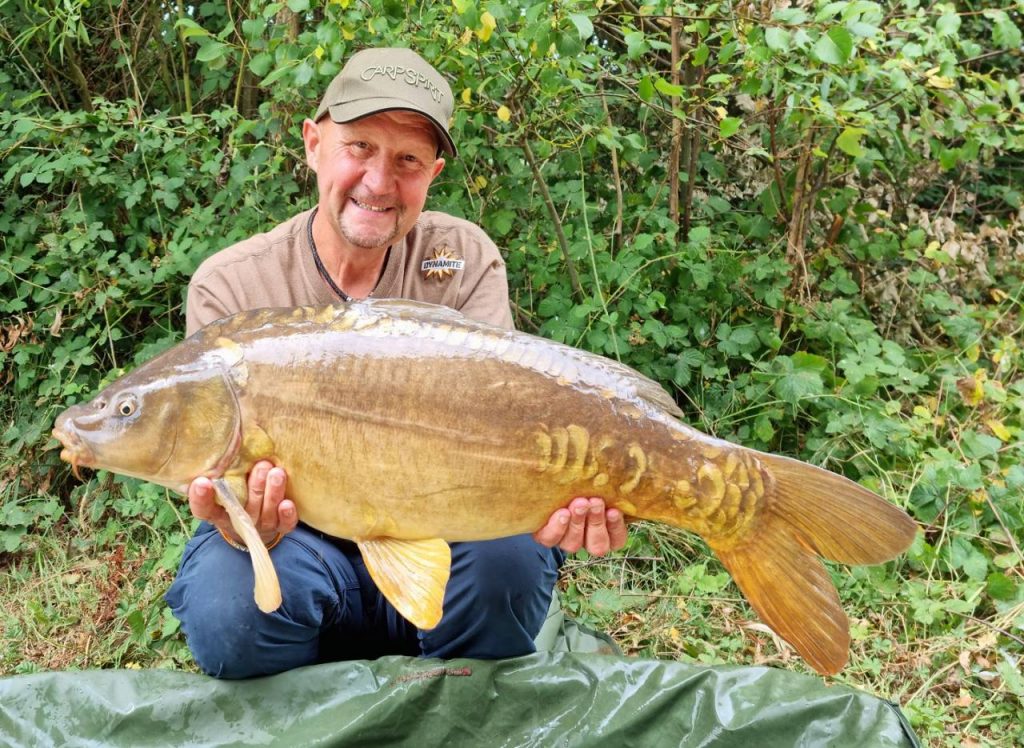 1 of 10 carp banked with Steve on Yeomans 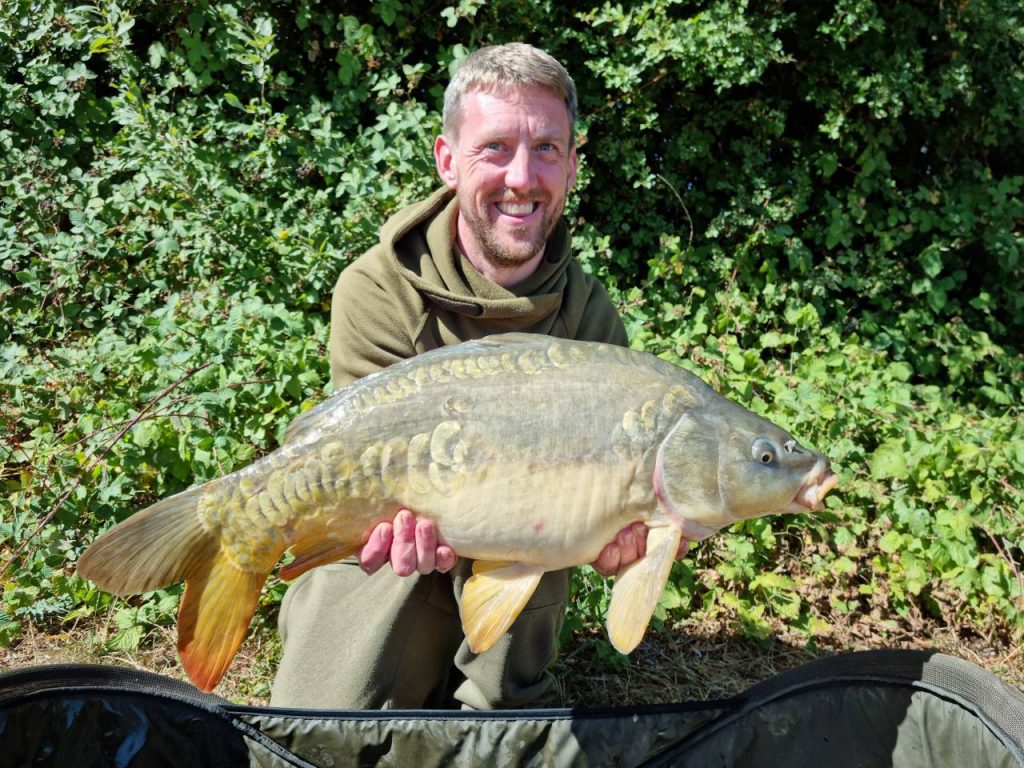 A fine mirror for Steve

My next work day was a day’s angling on Crowthorne Anglings Holme Grange Lake with Andy Mac and Michael Poulter in tow.

We were met by a lovely little fella who goes by the name of Chris Currie and what a lovely chap he is. We had an awesome day catching lots and lots of single-figure carp but most of all met some lovely youngster whom are definitely the future of our sport.

It was Jed, one of Chris’ young helpers, who stole the show however catching carp after carp on his surface gear. What a talented young angler and such a lovely lad! We need more like Jed coming through in the angling world.

Returning home worn out, I then thought I would check out the RK Horton complex as I had a 24 hour trip I could slot in before we as a family were going to the lovely Johnsland Fishery in Devon for 3 nights.

More about that next month shall we say…

So first light found me sitting on a bucket in Dog Bay on the Church Lake/ There were a few about and I couldn’t make my mind up whether to set up in The Slope swim or Springates as the carp were sort of split between the two.

When Lee Kidd turned up my mind was rapidly made up for me as a choice had to be made. Lee went into Church Bay Steps and I set up a couple of rods on Springates’ point.

The carp were showing not 20 yards out so I cracked open a tin of our XL Sweetcorn and catapulted a couple of pouches over the area the carp were most active. Minimum disturbance you see.

Then, I underarm flicked a couple of rigs into that area. One on corn and one on a 12mm Yellow Hit n Run pop up. Within 30 minutes it proved to be the right choice of swim and the right approach as the pop up rod pulled up tight.

A typical Church Lake deep bodied mirror of 25lb was the culprit.

A new rig was tied and swung back into position then a couple more pouches of sweetcorn was added again. An hour later a lovely 19lb fully known as Petals joined the party. 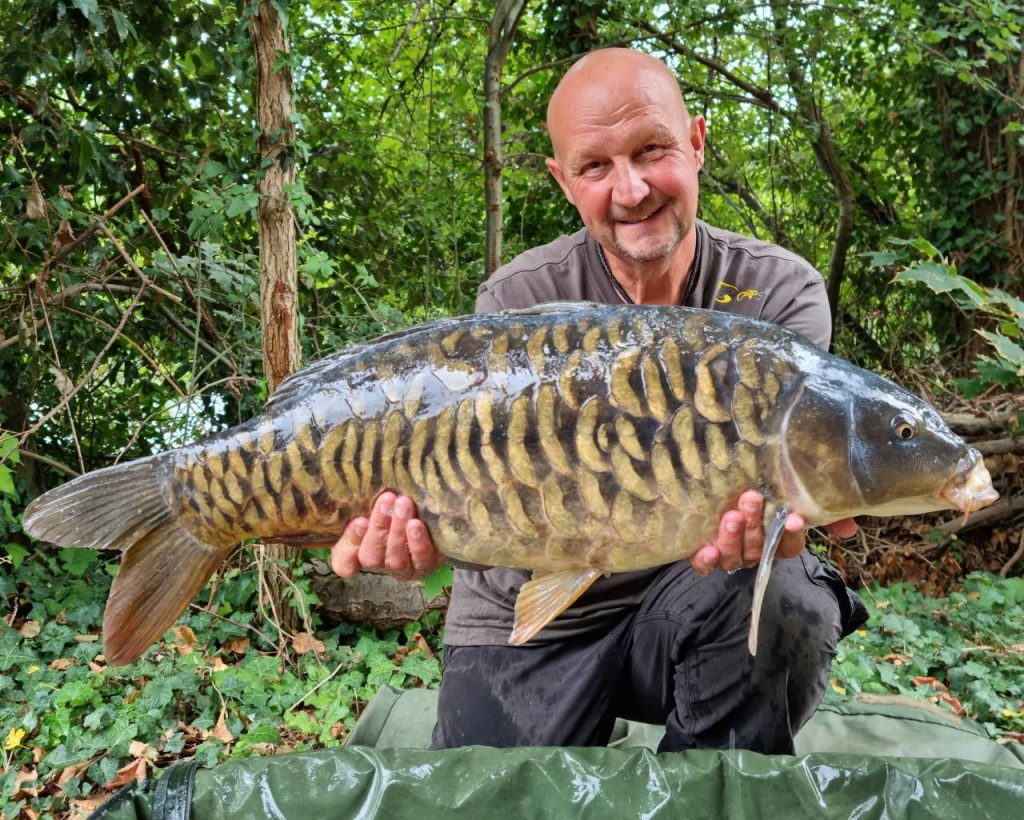 I followed the same ritual as before and not 10 minutes had passed before the same rod was away again. Now this was different gravy and stayed low in the deep margins for what felt like ages and ages before a huge mirror surfaced in front of me.

I jiggled the net to scoop him up and an old character known as Alfie was mine and at 44lb I was over the moon. 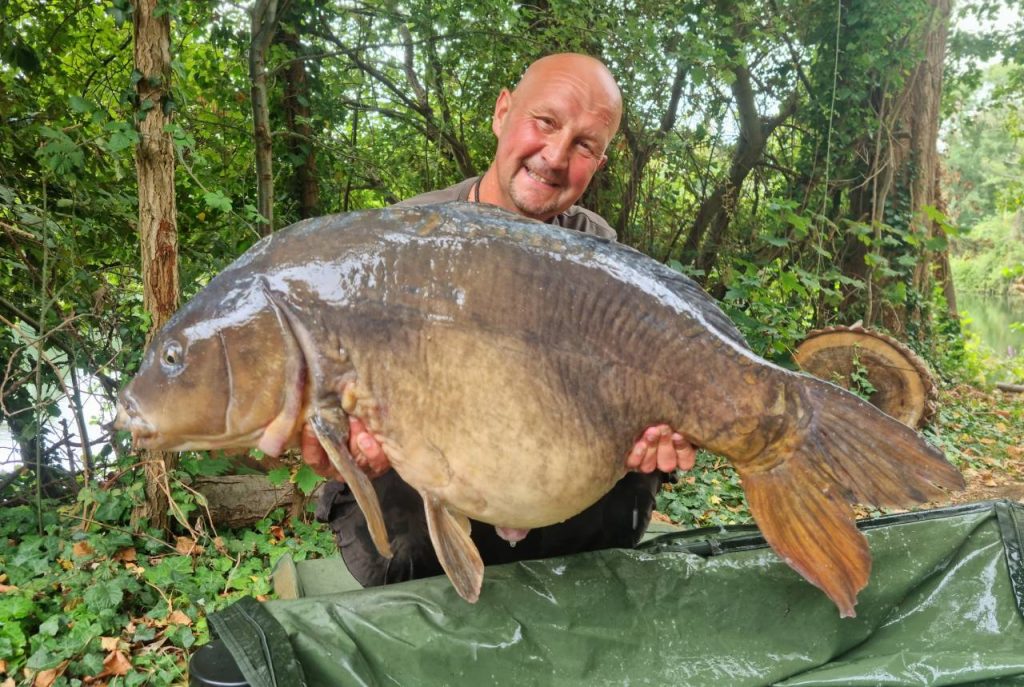 It was only now that I decided I would stay in the swim overnight so up went the new Carp Spirit Razorback Brolly system and I got myself comfy.

This had signalled the end of the day’s action but I knew I would get more chances at first light. True to form just on first light the corn rod was away and a beautiful linear of 27lb was nabbed. It wasn’t long before the right rod was also away and my final fish was a long common of 30lb.

This was now home time so although I may have had other chances I had kit to sort for our trip the next day. You’ve got to get it right in these circumstances and balance life. So my month of  August was luckily for me quite an eventful one again, full of good things and some great carp caught.

Until next month, be lucky out there!