RK Leisure, Albans Lakes for filming and a roasting hot trip to France. It’s fair to say Ian Russell’s June was busier than most! Here’s how he got on…

The start of June saw me pop over to W1 North Lake for a couple of nights as up until then the carp had not yet spawned over on the Church Lake which is where I would rather have been in all honesty. They were proper going at it day and night!

I set up in one of my favourite swims called the ‘Runway’ and baited my usual areas with a bucket of mixed 12mm CompleX-T with Frenzied Hemp and XL Sweetcorn. With my good mate Dave next door in the ‘Stile’ swim, things looked good for a couple of days fishing.

As usual it was early next morning when the take occurred and after a right old tussle with a carp and monstrous amounts of weed, I scooped up a lovely-looking mirror. Dave nipped up and at 29lb 8oz I was well pleased. 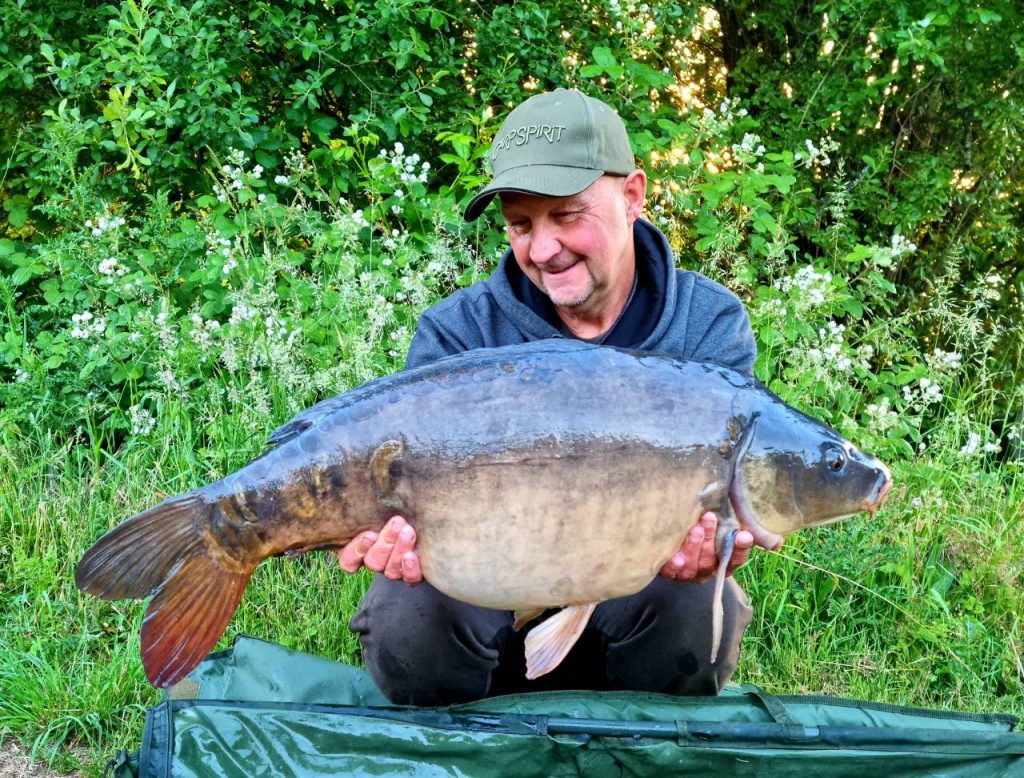 A great start for Ian with a 29-pounder!

Dave also had a nice 20lb mirror but just like that, the feeding spell was over.

The day passed slow and was blistering hot so it came as no surprise when the carp started spawning the very next morning… I phoned Jim the head bailiff to inform him and he sent Sam the Bailiff across to ask nicely for the anglers till fishing to pack away. I absolutely do not understand these guys at all. There were recently a couple of very high profile anglers on RK who literally had to be moved out of swims with spawning carp in as they were still angling amongst them.(Shocking behaviour in my opinion). Anyway, the café was visited and home I went.

I had also just received some new Okuma T-Rex reels and whilst spooling these up I spooled all my 8Ks up as well. All with Carp Spirit’s brilliant Velocity in green at 19lb BS. I cannot begin to tell you how much faith & confidence I have in this mono. It’s super soft for casting yet as tough as anything I have ever used previously. 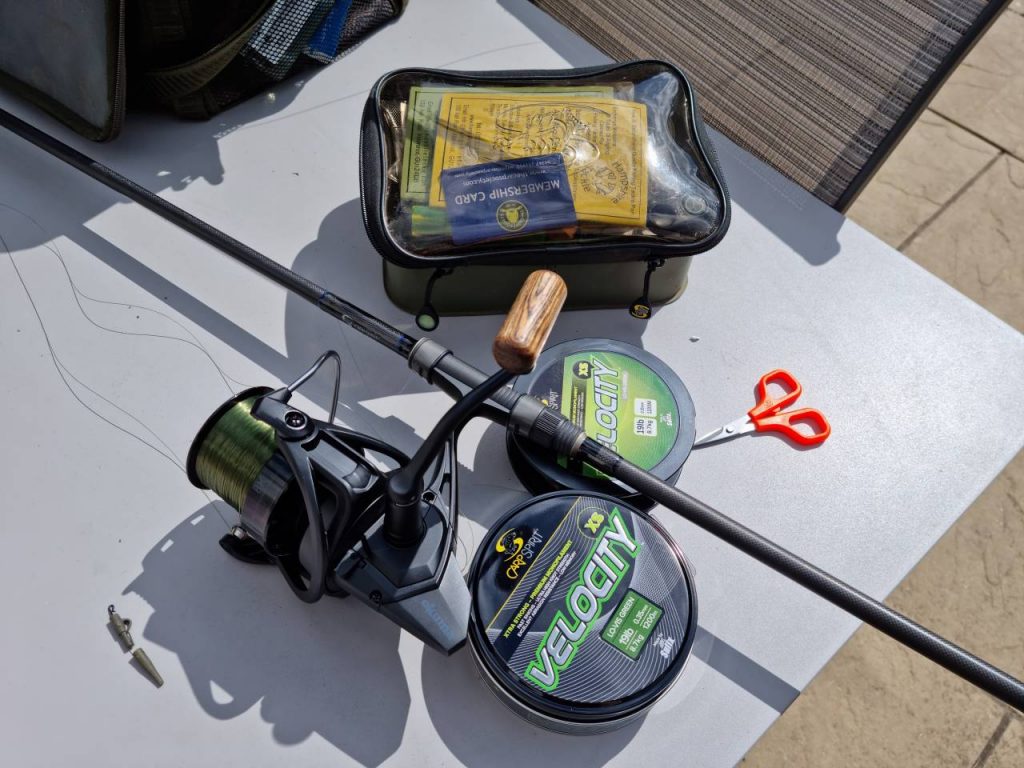 Respooling with the very best!

I smashed out two Total Carp features over the next couple of weeks. One at Linear on Oxlease and the other at Twynersh. Both of these were in ridiculous temperatures which to be fair made the fishing slow but the work got done.

My Carp Pursuit filming with Stevie Coe was next and we had a great time at Albans Farm Lake just of Junction 22 of the M25. This is a really nice and prolific lake which always gives a result if approached correctly.

The film is now live on Carp Spirit’s You Tube so go check it out! (tap here.) We cut the filming from 48 hours to 24 hours as yet again the carp decided to spawn, but I did achieve the challenge set for me by Steve. 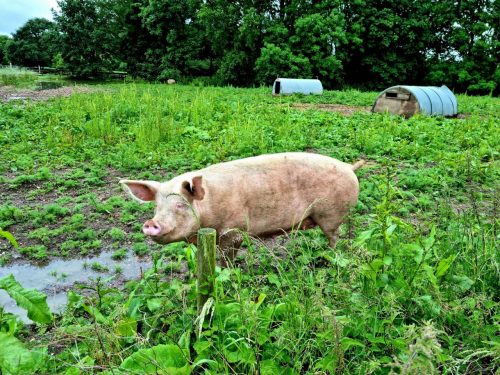 I wonder why it’s called the Farm Lake… 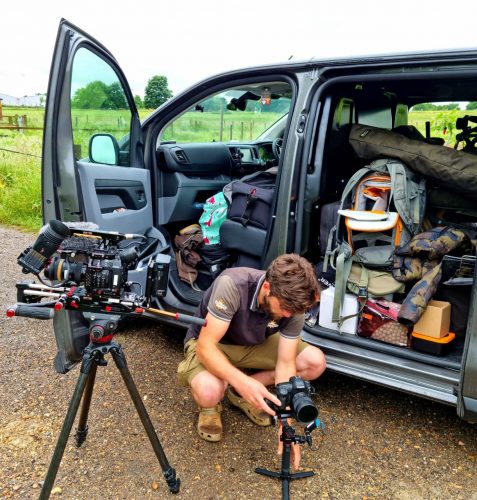 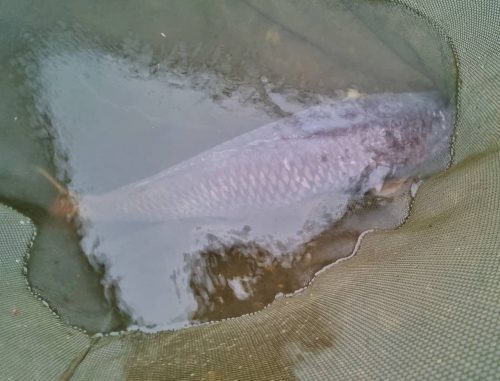 France was now beckoning and myself and friends were off to Le Evasion’s largest lake called Le Trois which was to be a bit of an exploratory trip as very little is known about the present stock.

Prep for this week had filled my dining room at home for a good few days so it came as a relief to Debbie when the van was eventually loaded. 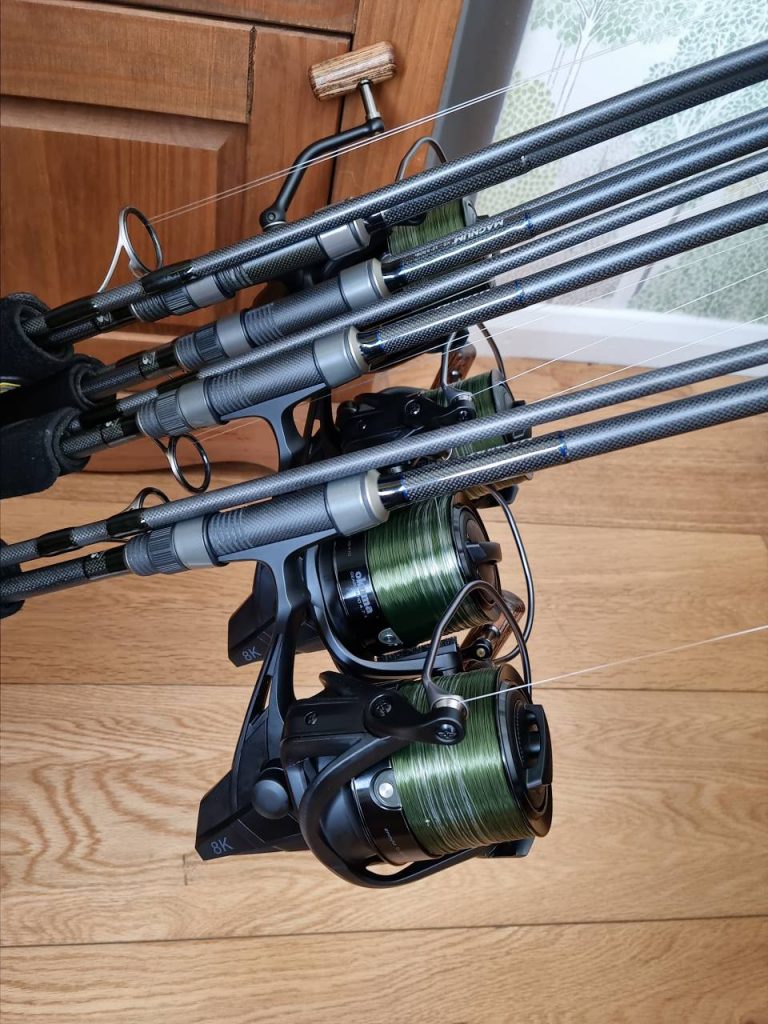 Rod and reels are ready. 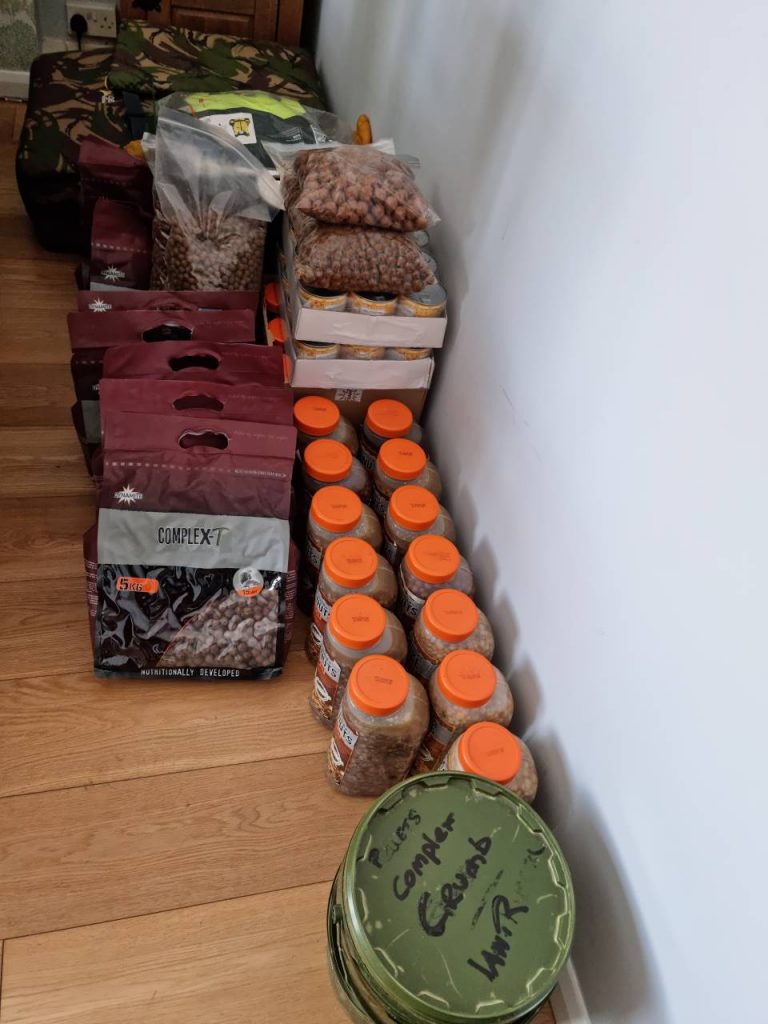 So is the bait!

Anyway, we arrived at about midday and sorted swim selection out and got on with the job at hand. The lake itself is lovely and lots of work had been carried out to make it comfy for anglers. I found a couple of nice areas whilst bobbing around in the Black Boat we had been sent from Carp Spirit.

These boats really are the best I have seen and so many get sold for European trips.

Anyway, I baited the small bay opposite my swim with Dynamite’s Chopped and Mini Tigers with a few CompleX-T baits to keep the crayfish happy. The weather again was ridiculously hot and made conditions difficult to sit around in but as the week rolled by we all managed a carp or two with my best ironically being my first one which came 3 days into the trip and was an extremely long 34lb common. 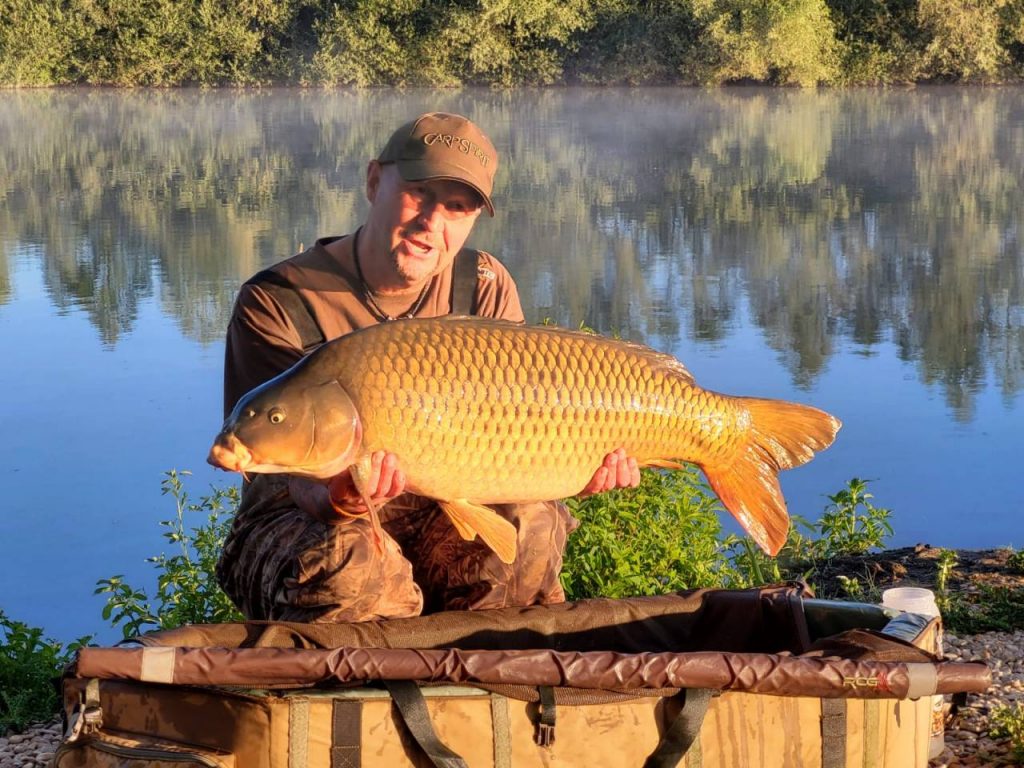 First blood in France in the shape of this 34lb common

These fish are wild and really fought like their lives depended on it. Michael next door had a low 30 mirror and a few cracking looking 20lb commons whilst Andy had a 32lb mirror before moving over onto Luxemont and helping himself to a big ole catfish. 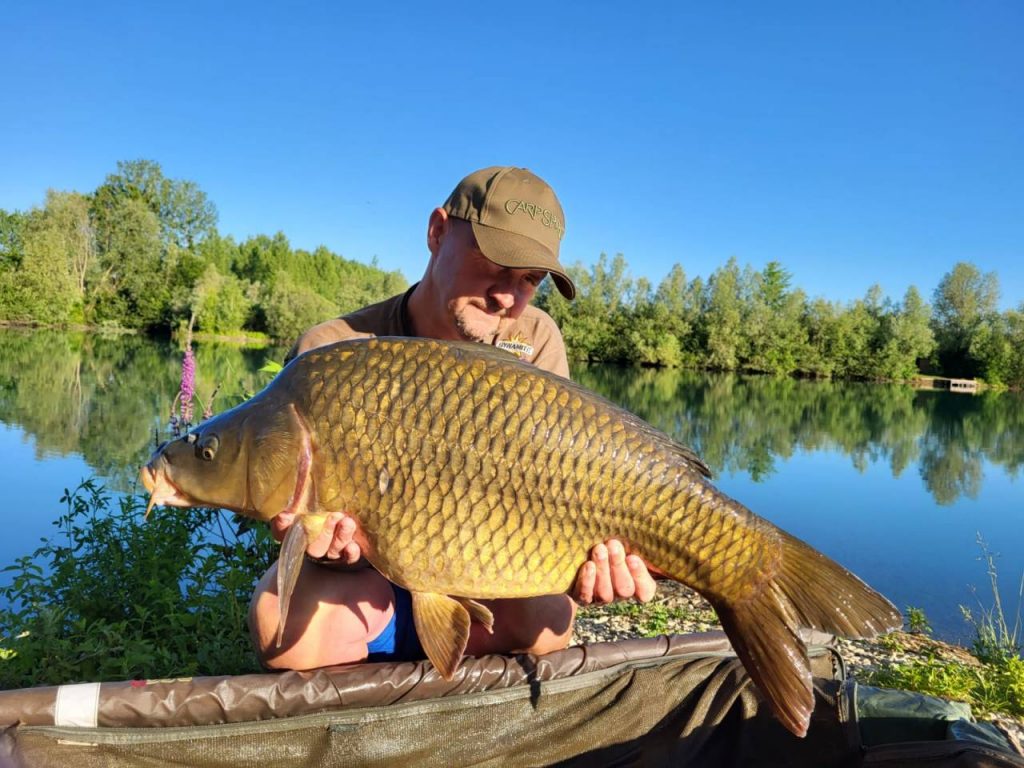 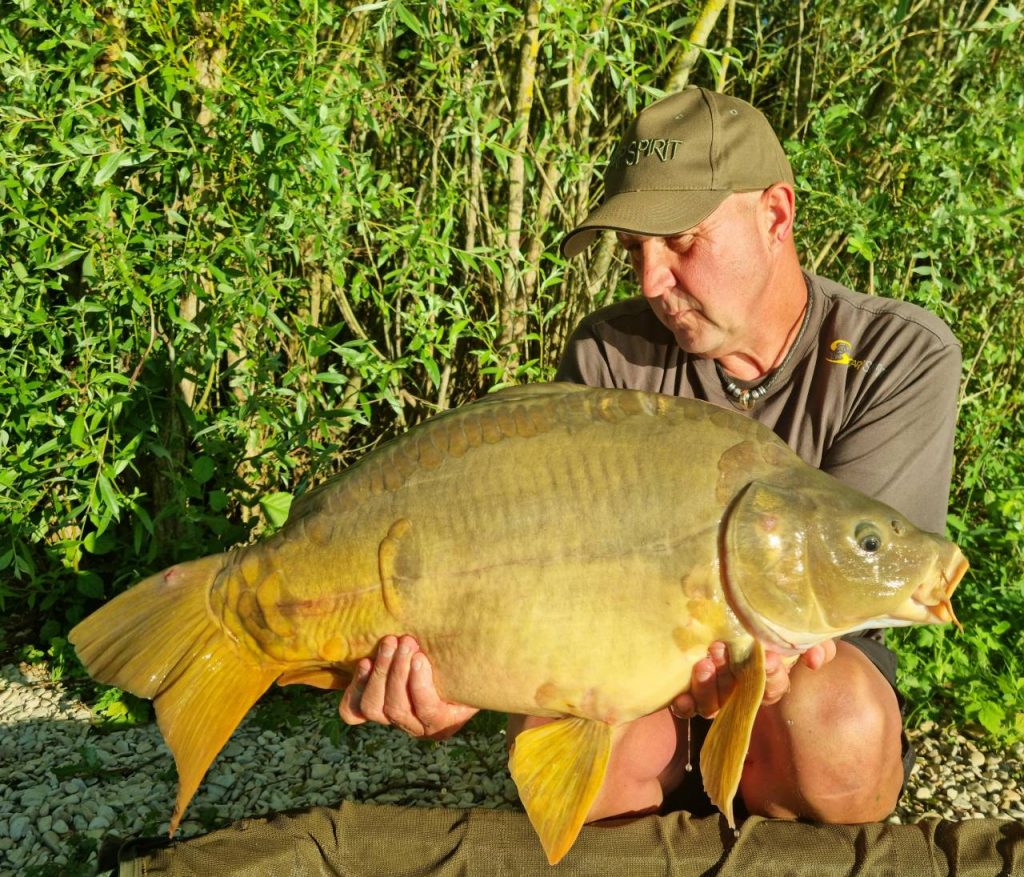 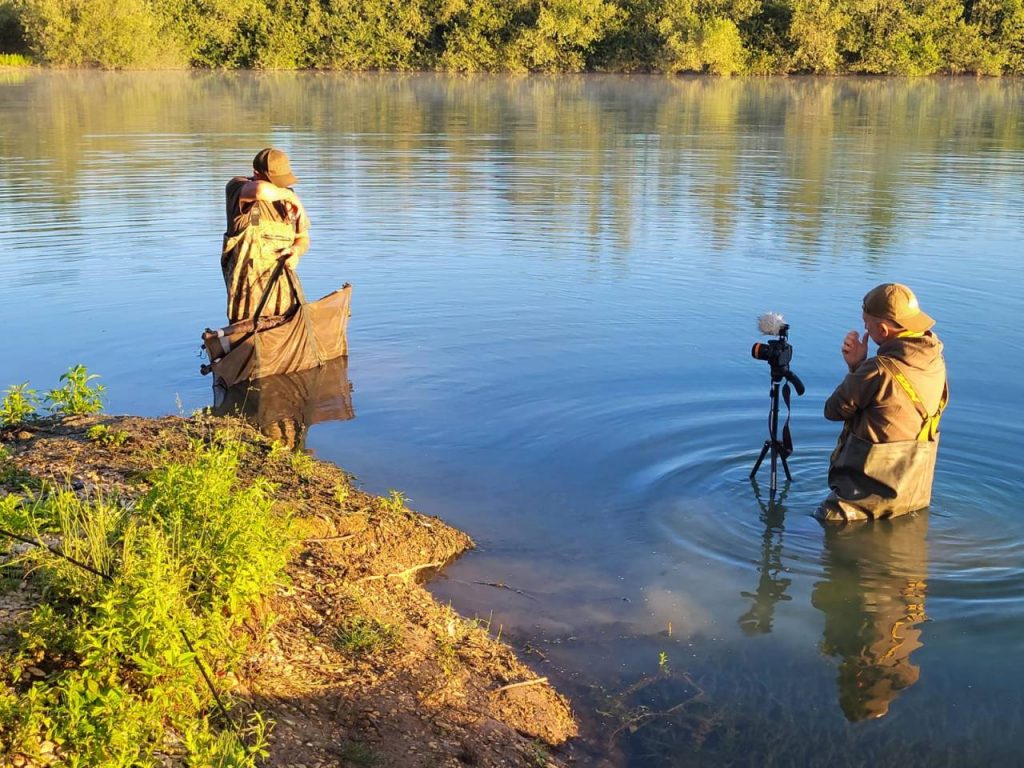 As usual, before we knew it the trip was ending and we were homeward bound. Whilst meeting lots of other anglers at the train we learnt that we were not alone in our struggles to catch as most had a hard week.

As I tap this out I’m prepping for a trip to Nuddock Wood Lakes with the lovely John Flewin to film our Summer Episode of 4x Seasons Carping. Keep your eyes peeled as hopefully this will be a goodun.