Kicking off the month was a French trip to my ole mate Ben Loftin’s lake for a week with friends Michael, Keith and Andrew.

The lake has a fairly unknown stock so this excited us. The van was swiftly loaded with lots of various Dynamite Baits products and my new 2.7 metre Carp Spirit Black Boat.

As July has been rammed with work trips I’ll try and keep this part short, but much fun was had and we all caught a few lovely hard fighting carp.

My best was a very long, crazy common of 34lb. Because of the massive head of crayfish present my main baiting approach was with Dynamite Frenzied Hempseed and Tiger Nuts with lots of CompleX-T pellets. 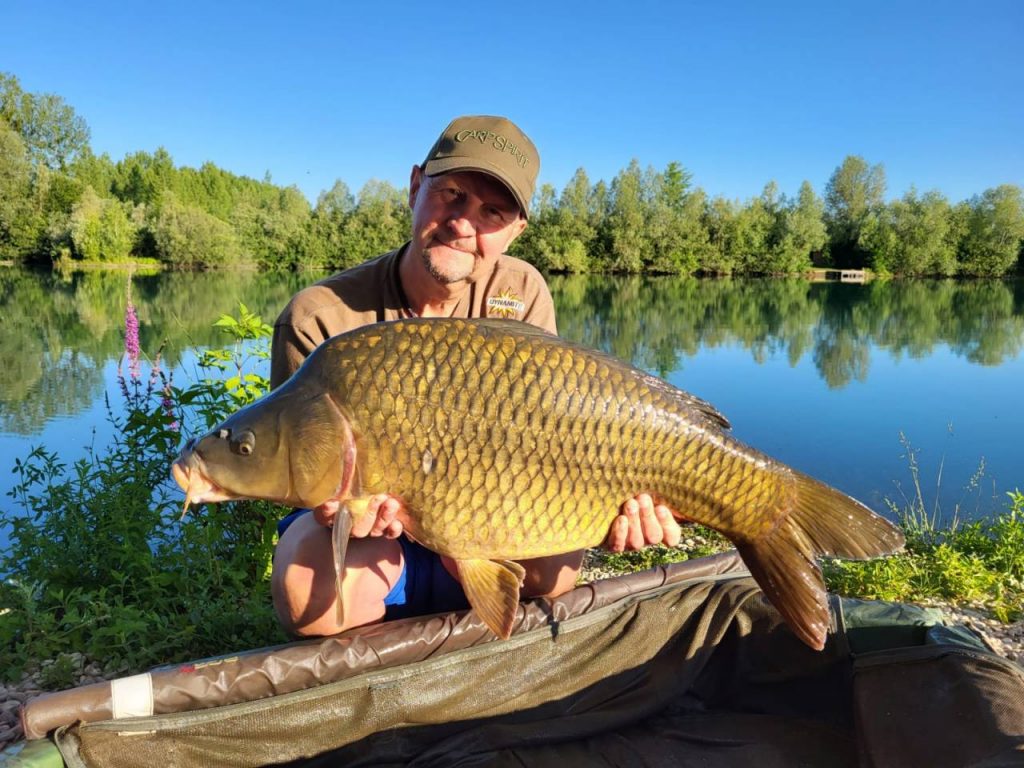 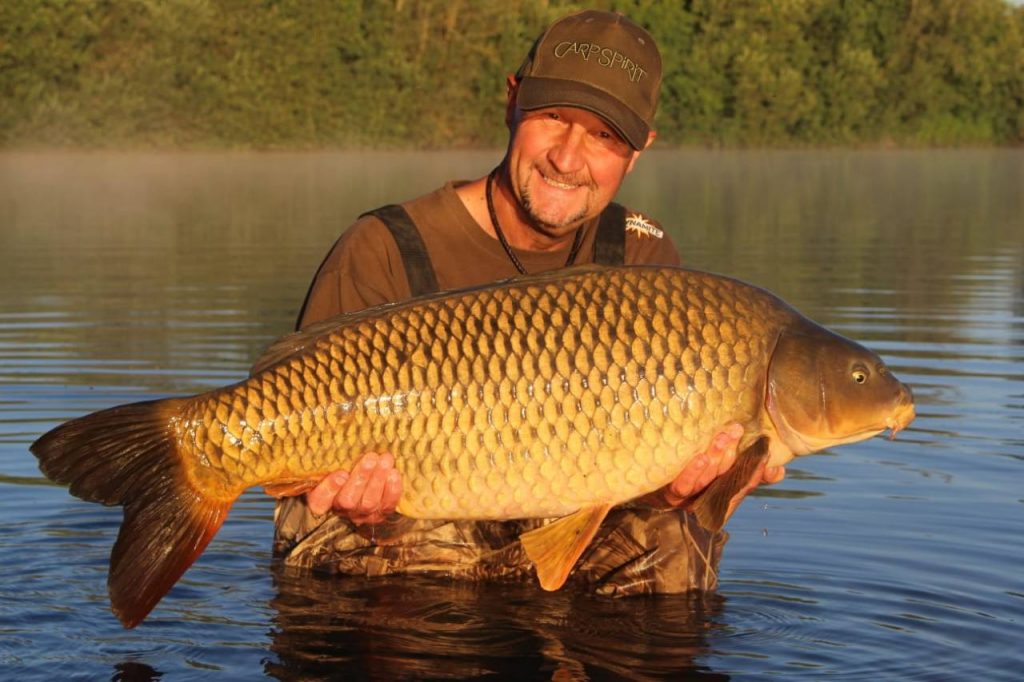 Another lovely French common for Ian.

Once home it was back to filming and mine and John Flewin’s 4x Seasons Carping Summer 2022 episode was on the cards, this time at at Rich Anderson’s beautiful Nuddock Wood Fishery.

I was given the use of Blue Jay Lodge for the trip and John was immediately adjacent to my left. My swim had access to the LH out of bounds margin and this is where I concentrated my baited areas, whereas John was fishing fairly long into open water.

I was using my RT4 baitboat and loaded it with Sweetcorn and 12mm Spicy Shrimp & Prawn baits with 15mm match the hatch pop-ups on my fave size 4 Medium Curve Carp Spirit Razorpoint hooks.

These lodges really are Top Notch and have every luxury you could possibly need including a Hot Tub!

Anyway, during the first night and early morning I had an amazing-looking 31lb mirror and John had a couple of doubles. Too see what happened in the remainder of the trip, keep your eyes peeled for YouTube video but it’s safe to say we did good! 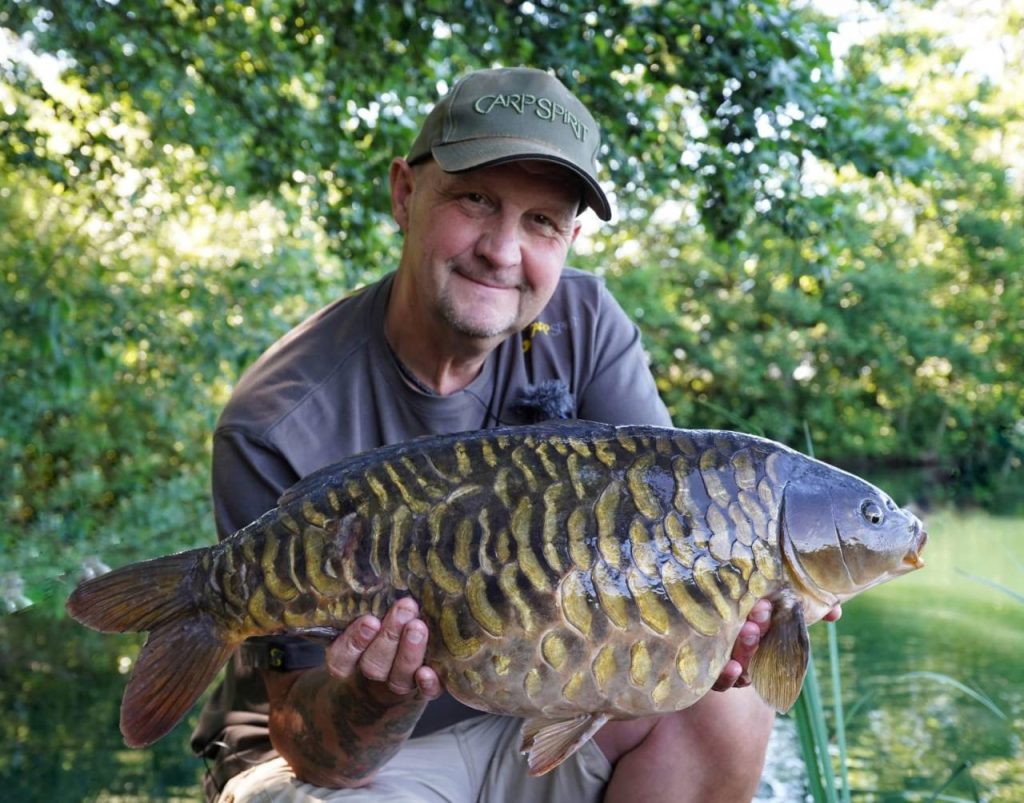 Check out the scales on this pretty one! 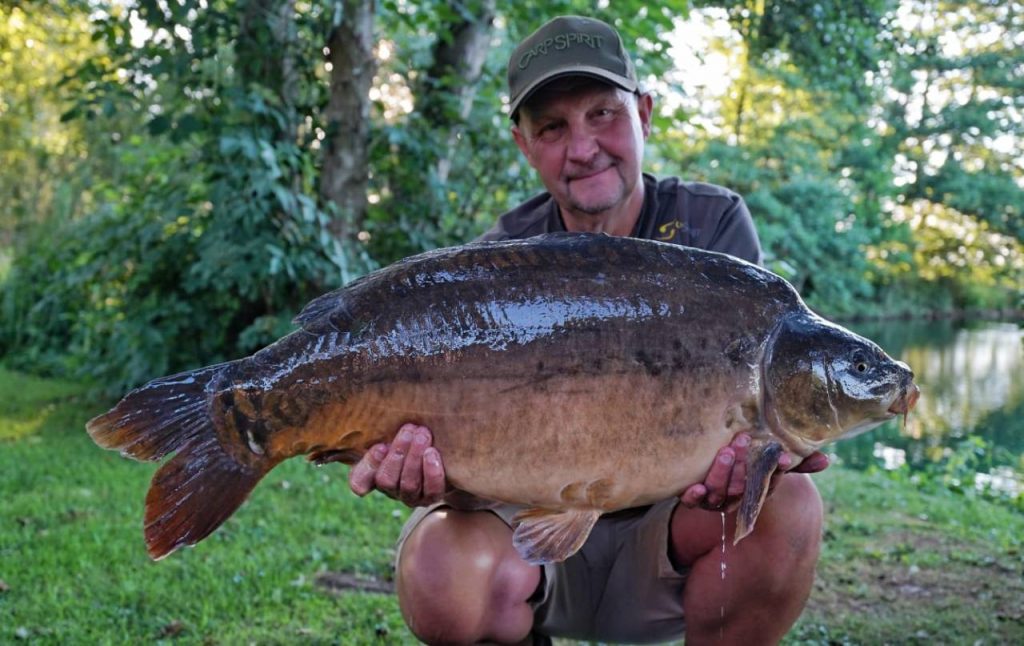 A 31lb stunner from Nuddock Wood.

I then spent 24-hours with our Dynamite Dutch ladies Lizzette and Bianca over on Brasenose 2 whilst also filming our new range of Carp Spirit Bivvies. We had lots of fun, caught a few and had a Chinese Takeaway the size of you would not believe!

Now I am honestly not a fan of high temperatures whilst fishing and we all know how hot THAT Monday and Tuesday was but nevertheless, Myself, Dan Murrell of Catch It and cameraman Dan Wildboar went to a fishery called NR Gatten in Shrewsbury to make a film about the place for the Catch it App.

On arrival you are greeted by a very friendly owner named Terry and given a tour of a lovely little lake and the palatial lodge which sits at the end of the lake.

Myself and Dan set up in adjacent swims in the middle area which effectively gave us half a lake each to work with. I yet again made use of my RT4 baitboat and went in heavy with Dynamite XL Sweetcorn, CompleX-T pellets and 12mm Complex T and Spicy Shrimp & Prawn boilies.

Before long I had a very long 28lb mirror which Terry assured us goes 31lb-plus before spawning. Nevertheless we were off the mark with our filming and by the end of three burning hot days we had amassed a good few lovely NR Gatten carp for our film.

If you get the chance, you really should check out this amazing little 5x swim venue as it holds some very special carp. It wont be long before Mr Wildboar has edited the film and uploaded it onto the Go Catch site for all to see… 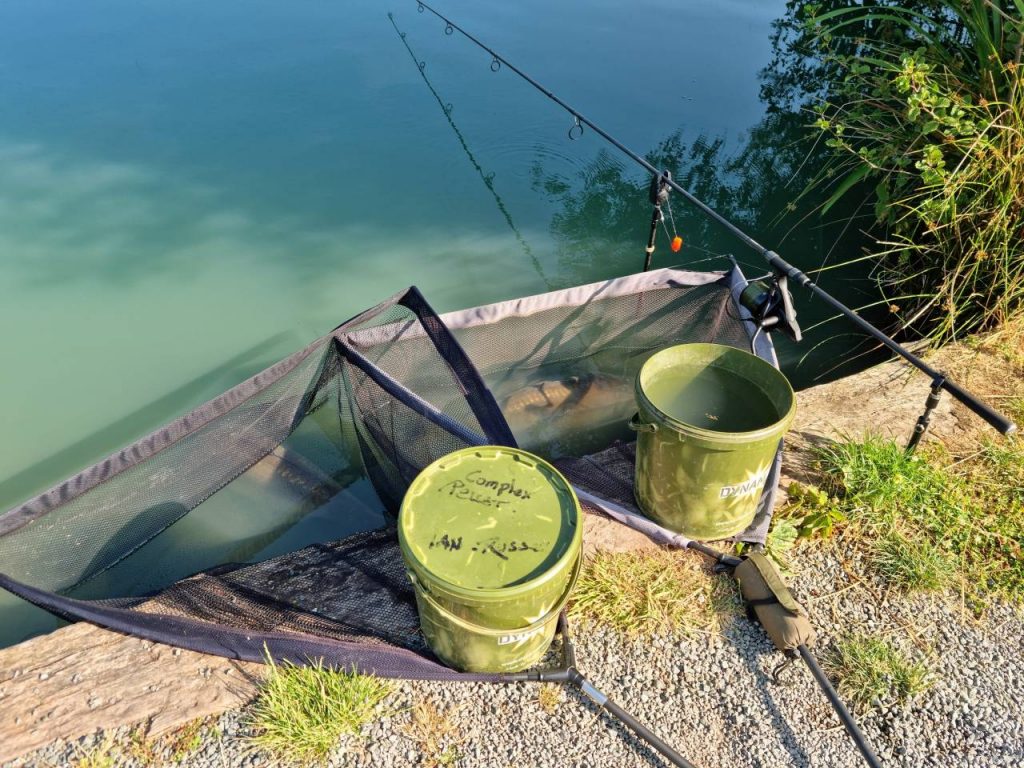 The fishing kicked off at NR Gatten! 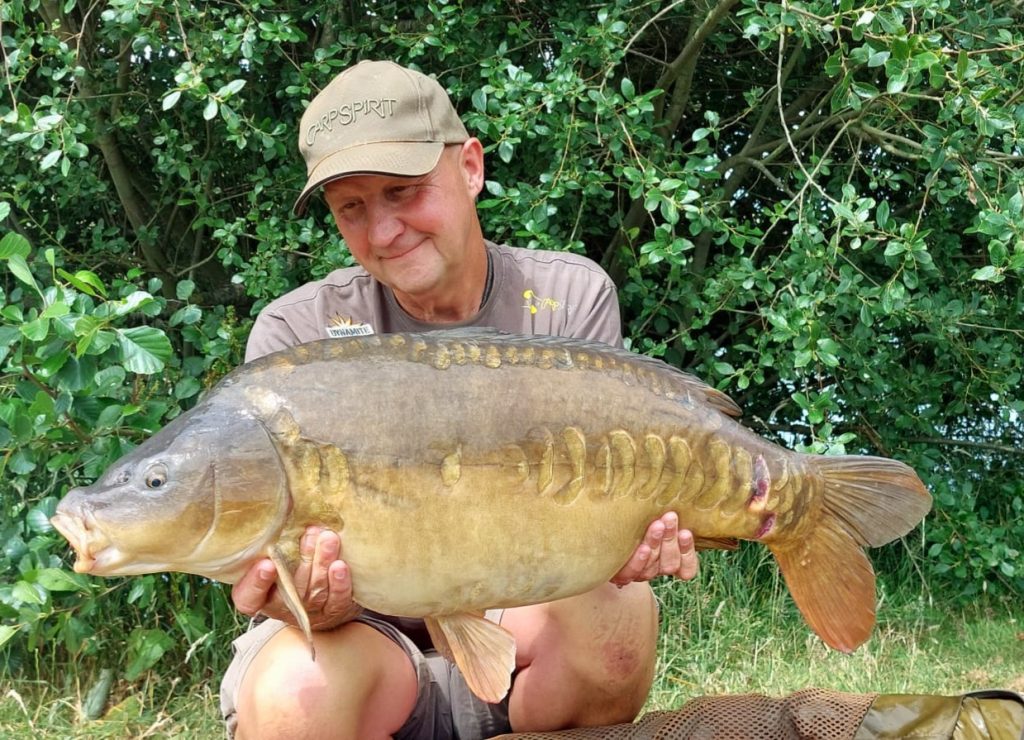 This fine mirror got Ian on the scoreboard.

As the month was now drawing to an end I at last had a couple of days to myself. It was here that I realised I had not fished my favourite W1 North Lake for a couple of months so I arranged a couple of nights over on there.

Now, I may not have fished it but I do find time to walk its banks several times a week so I’m always in touch with what is going on over there.

On arrival, there was a fresh and strong NW wind blowing into a corner and with closest swim being empty it was a no brainer to jump in there. Having never found the swim empty before when conditions are right I had limited knowledge of the subsurface of the area.

A quick lead around established 2x clear areas in amongst heavy weed. My usual approach on here is to start with a proper bucketful of bait so I did just that over the LH and Middle rods whilst putting just 5x X Spods over the RH rod which was fished about 60 yards away from the others.

The bucket contents were as follows: 1x jar of Dynamite Frenzied Hempseed, 4x tins of XL Sweetcorn and a couple of kilos of Dynamite’s new test bait with a Yellow Hit N Run pop ups over the top on my Ronnie rigs.

After just two hours and having just seen a very large carp lift itself out of the water over the area, the middle rod took off.

To say I was nervous was an understatement but after a few minutes a cheeky little scaley 22lb mirror was scooped up and pictured.

A new rig was then tied and reset.

My next take came at 8pm and was on the RH lone rod. Now, this was the hardest, most prolonged fight with a carp I have had in a long long time and eventually a really large, old carp slid across the drawstring.

My friend Matty had turned up and together we recorded a weight of 44lb and the carp was recognised as The Broken Lin, which, incidentally was also amongst the most sought after in W1.

Chuffed would be an understatement and to share the moment with my closest friend Matty made it all the more special. 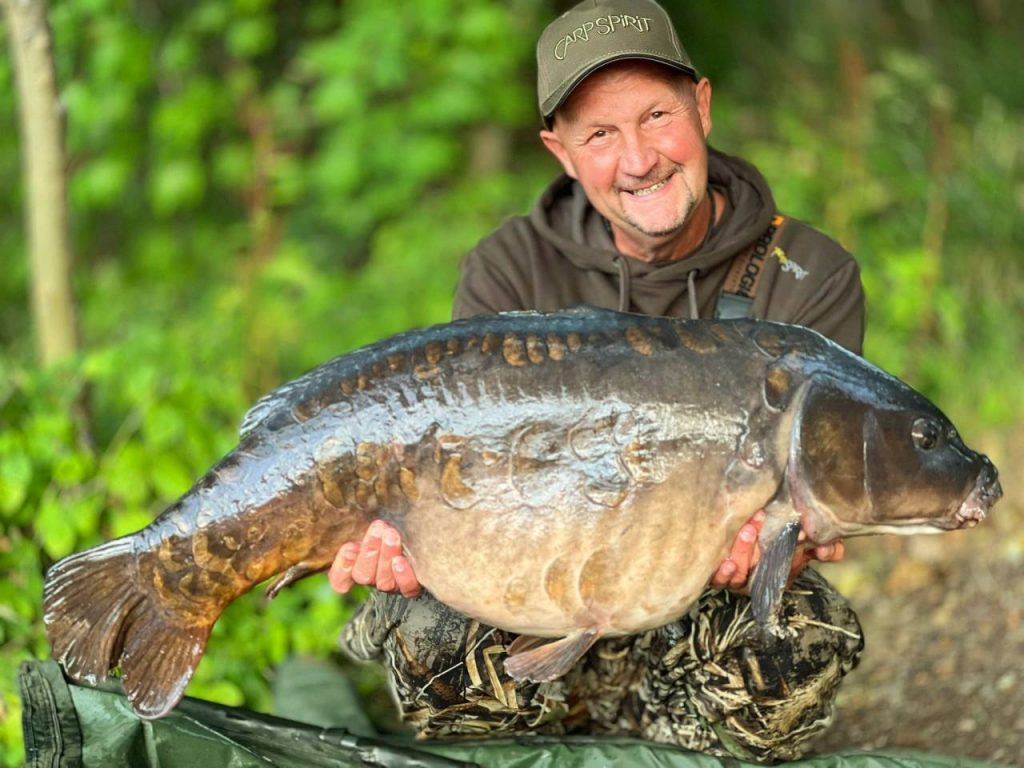 At first light I managed a 25lb common and before I knew it the afternoon had swung round. The wind changed and most of the carp drifted away but with the accessible swims where the carp had gone to all taken, I decided to stay put for the night. 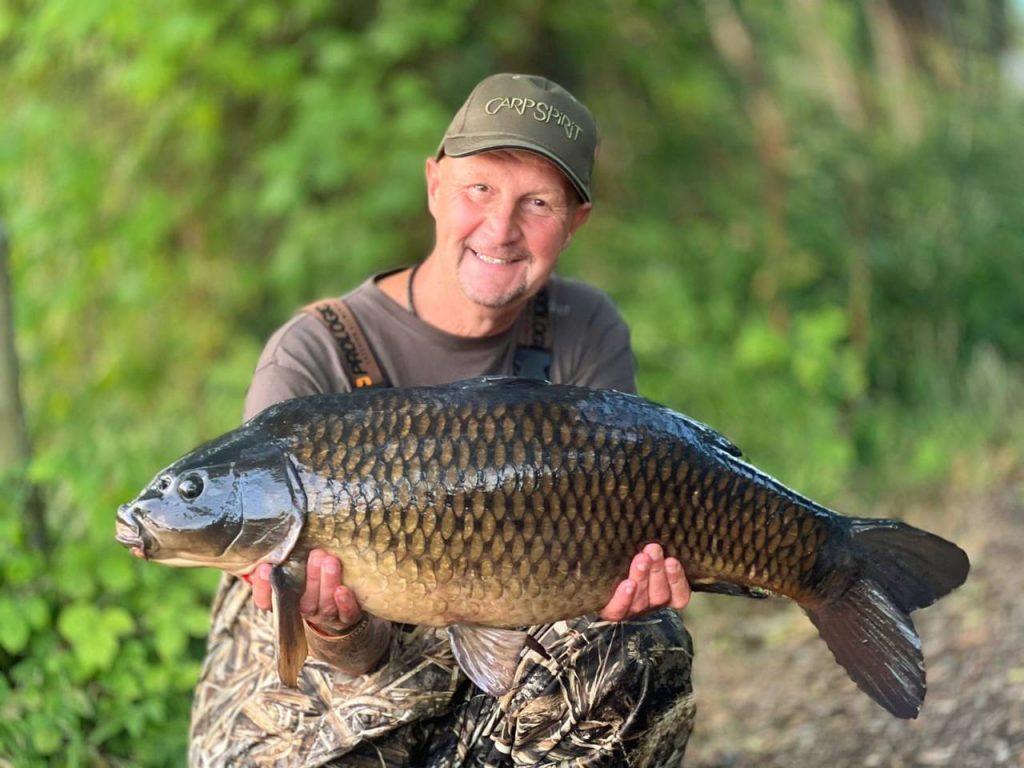 A 25lb common on the final morning.

At first light again the middle rod was away and a lovely zip linear was nabbed.

I packed away very happy as you can imagine! So all in all a very busy month for me and August is going to be just as busy. How some of these other angler employed by companies manage so much personal fishing is beyond me but to be fair I love being busy in my work.

Until next month guys – tight lines