Just a couple of weeks after banking the largest fish in his favourite Wraysbury 1 North Lake, Ian Russell returned for another crack in hope of a few more winter bites and the venue did not disappoint! Here’s how he got on… 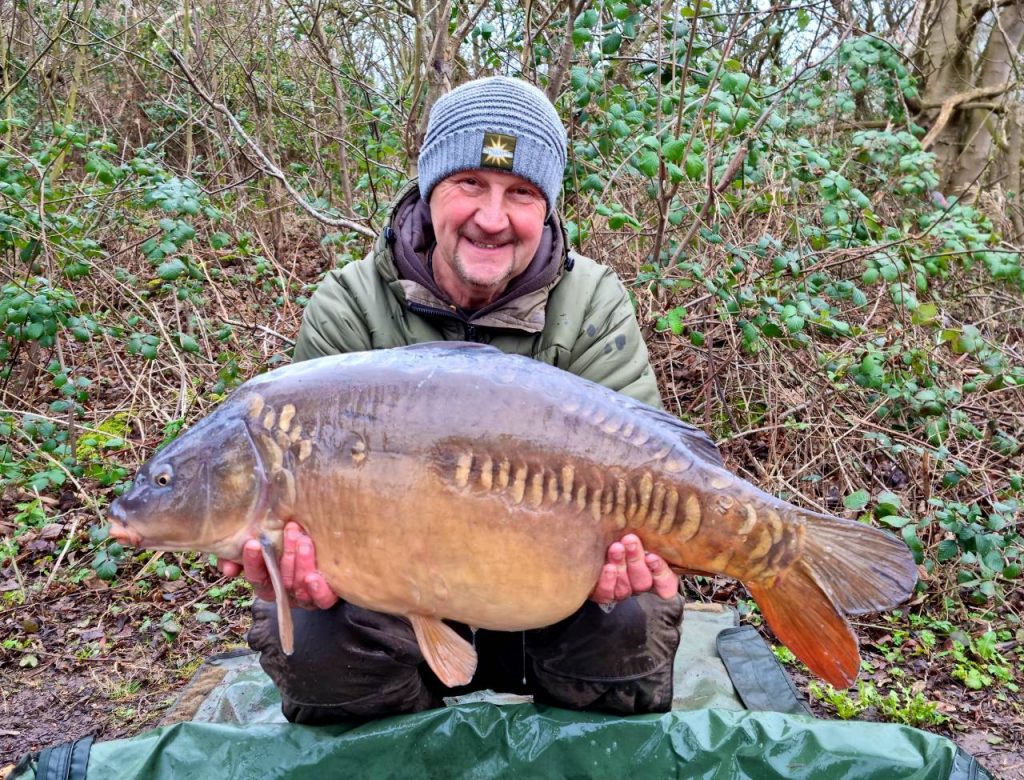 This week I found myself with a few days of personal fishing time before my filming trips commence so I took a wander over to my favourite Wraysbury 1 North Lake on the RK complex. I sat with Carl for an hour or so and have to say it did look good for a bite or two so I wandered around to the Rocky Barge swim and left a bucket behind an angler called Ian who was just starting to pack away.

The Rocky is one of my favourite swims and not only do I know it extremely well but I also know it has very good winter form. By 4pm I was setting up but not before depositing a whole bucket of goodies which comprised of two jars of Dynamite Hempseed, four tins of sweetcorn and a kilo of 12mm Monster Tiger Nut baits.

This may sound like a lot of bait but these carp do like their food and this combination has certainly proved a winner for me, all year round. My rig choice was easy to make – a size 4 Medium Curve Razor Point Ronnie rigs fished on a 32lb Opti-Mex fluorocarbon boom with the newly released 12mm Monster Tiger Nut pop ups on each one . These were crunched tightly together over the baited area and I finished throwing the bivvy up just as darkness fell.

The first take came at 1am to the L/H rod and this was a very strong fish which weeded me up before eventually giving up. A 38lb VS mirror was weighed and Kev from the next swim came over and took the pics for me. 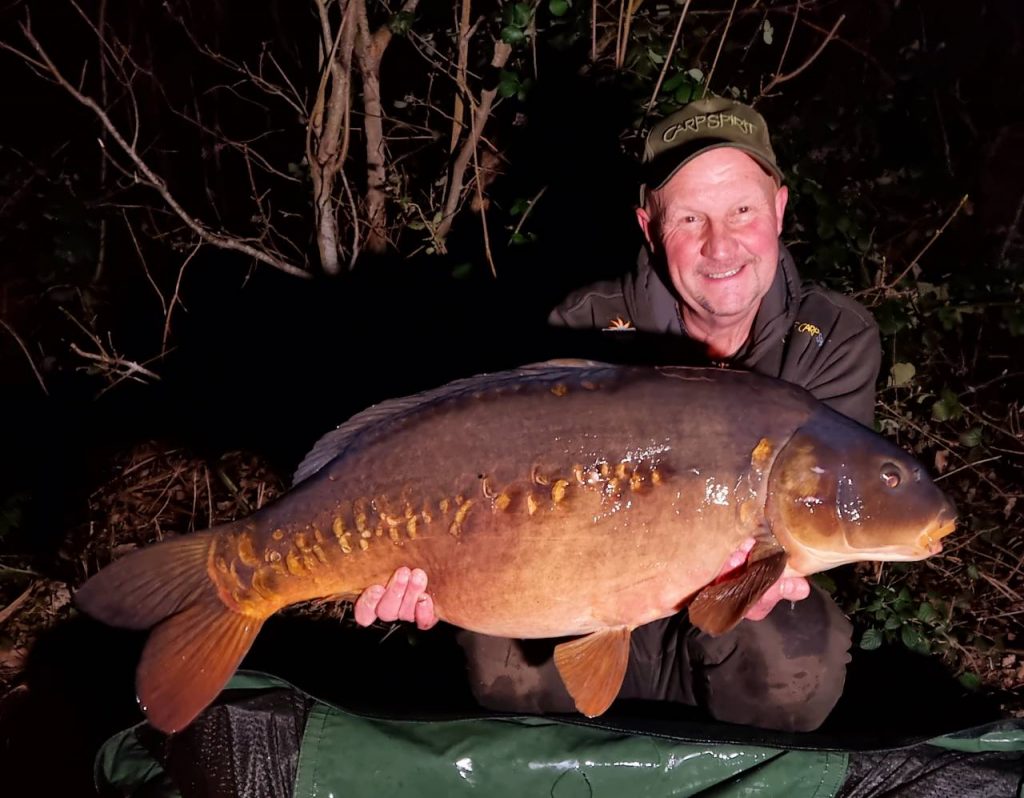 First fish don’t get much better than that! 38lb of VS mirror carp.

With the rod quickly repositioned, I never really had the chance to get back in the bag when at 2am the middle rod was away! This fight was a much different with the fish just wallowing its way in on the surface before being scooped up. Another biggie and Kev again came and did the honours with the camera and at 36lb I was totally chuffed. I told you they like a good bit of grub in here! 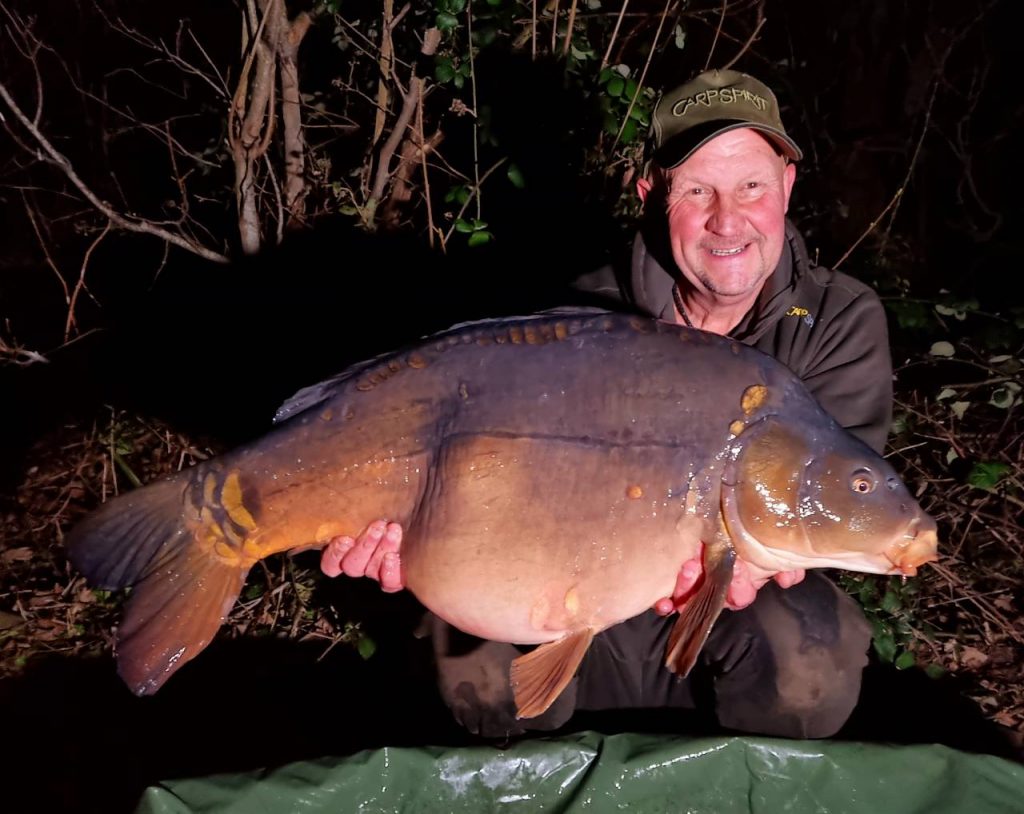 Second bite and second fish! A proper fatty at 36lb.

Now, when I net these carp I religiously pop the hooklink off in the net and immediately re-wrap and reposition the rod as too make the most of these small windows of opportunity. This is something I always do and something which people quite often look strange at me for doing, but trust me it goes a long way.

Soon after the 36lb carp was was released, I was not surprised that the middle rod again took off. Don’t you just love it when a plan comes together!? Anyway, a lovely 32lb mirror signalled the end of that feeding spell. Thank you Kevin for giving up your beauty sleep to help out!

Three bites in as many hours. This 32lb mirror brought an end to the crazy feeding spell.

With all the rods repositioned it was time to grab a couple of hours sleep before daylight. Come 7.30am and the rod which had remained silent (that being the R/H one) took off and this one really did not want its picture taken! Eventually it subdued however and another 30 at just over the mark was pictured. 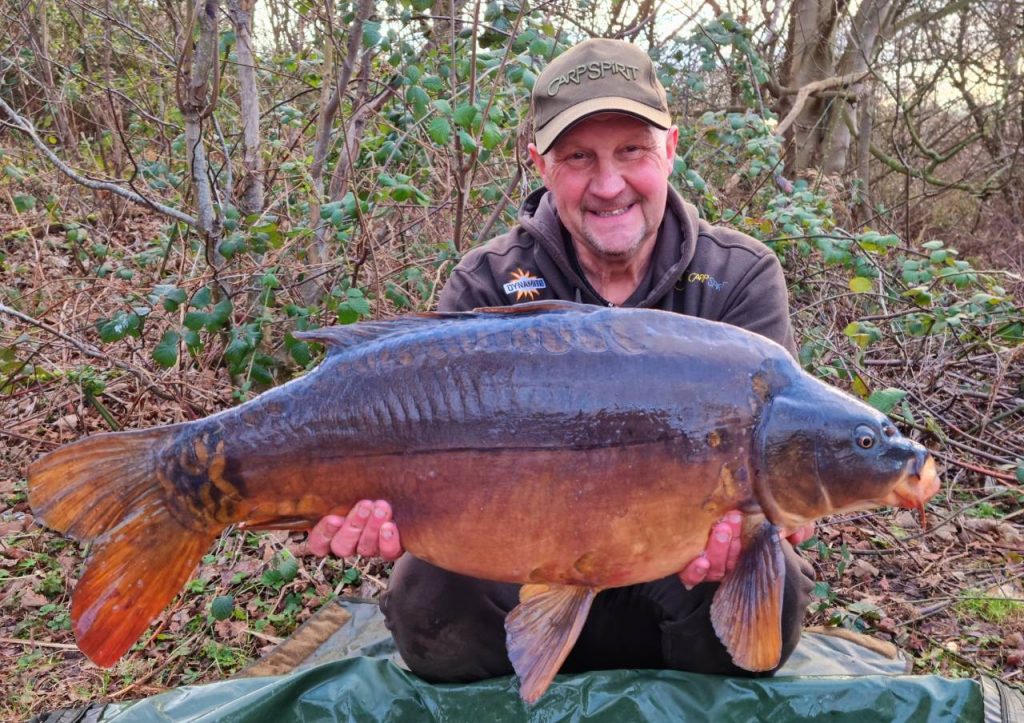 I didn’t even get time to relish in the moment however because as soon as i returned it, the same rod that I’d just repositioned took off! Not one to complain but a low 20lb mirror smashed my average weigh back down LOL.

Now that was the end for the day. I slept a while and then set about depositing another bucket of bait out to the area and at 2pm reset the rods on top of it. My much bigger brother Matty popped over for the evening and with a weather change that was flat calm and raining they started showing over the area in good numbers and at 7pm the L/H rod was the first away. This was an amazing looking 28lb 8oz linear mirror, one of the best lookers I’ve had from here actually. 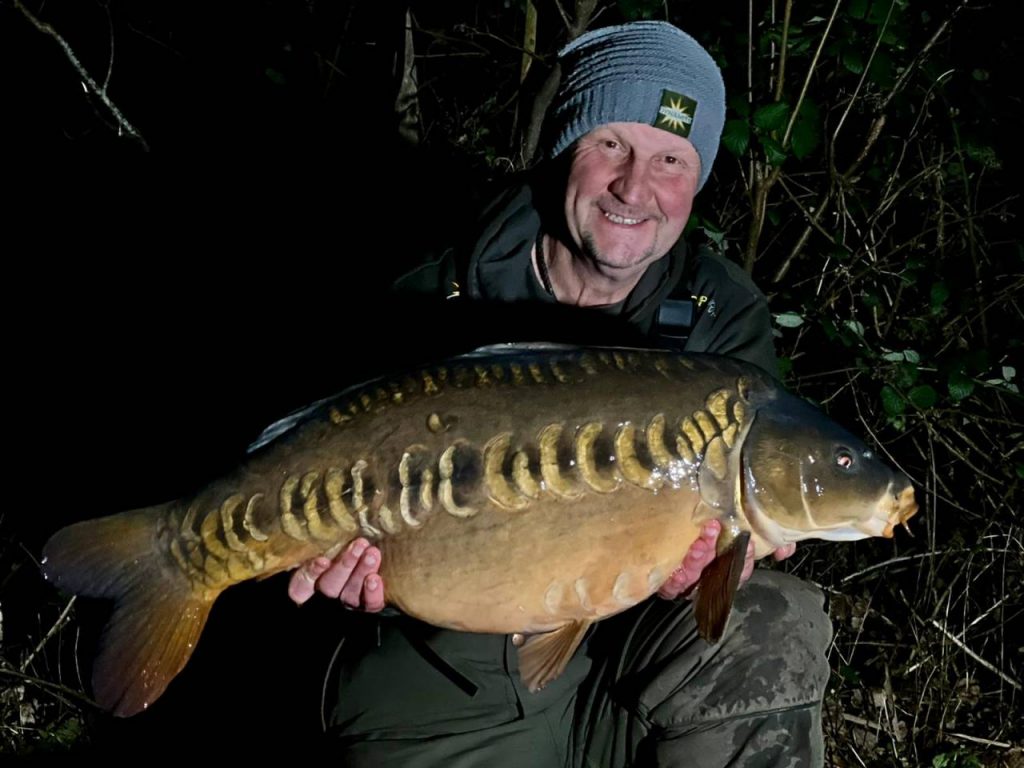 Not the largest but one of the better looking ones Ian’s had from W1 North.

As the evening went on they continued to show over the area until 8:30pm when the middle rod was finally away. This was a very powerful fish that ran me all over the place until Matty scooped up a big old common. Whilst jumping up and down making whooping noises (that was us not the carp by the way) the R/H rod was then away.

This was unbelievable action for February but it  goes to show good bait fished correctly and very accurately can certainly be the way. A mirror was the culprit and I soon had all the rods back in play. Kev came up to assist us and we recorded weights of 35lb 8oz on the common and 27lb on the mirror. 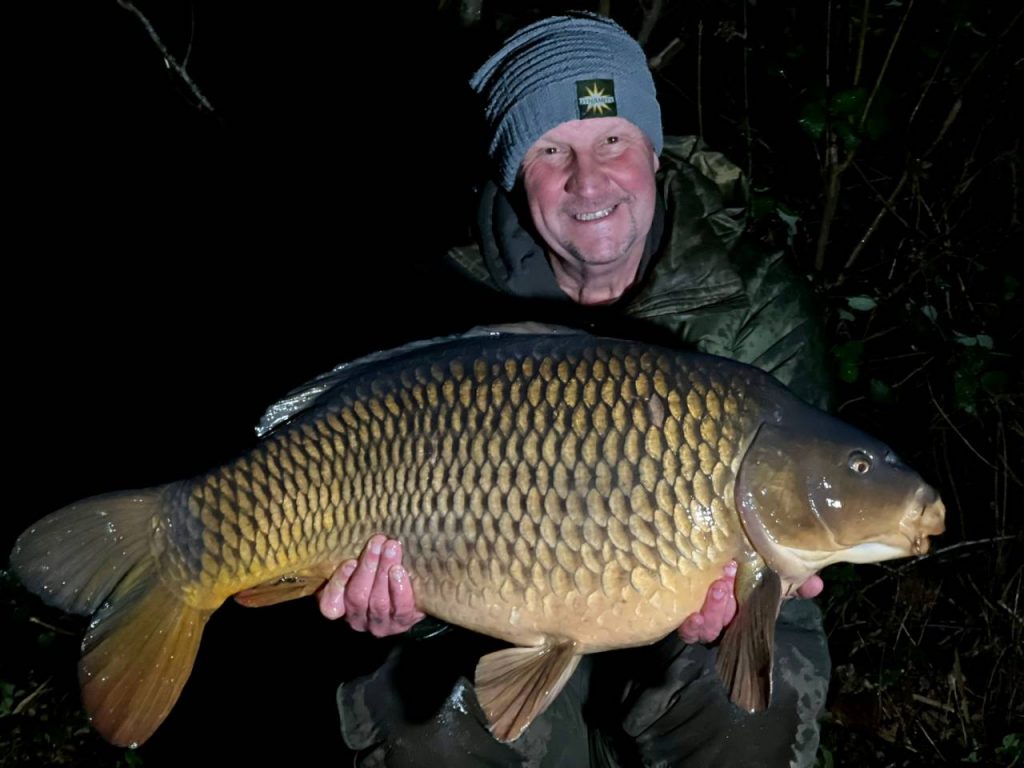 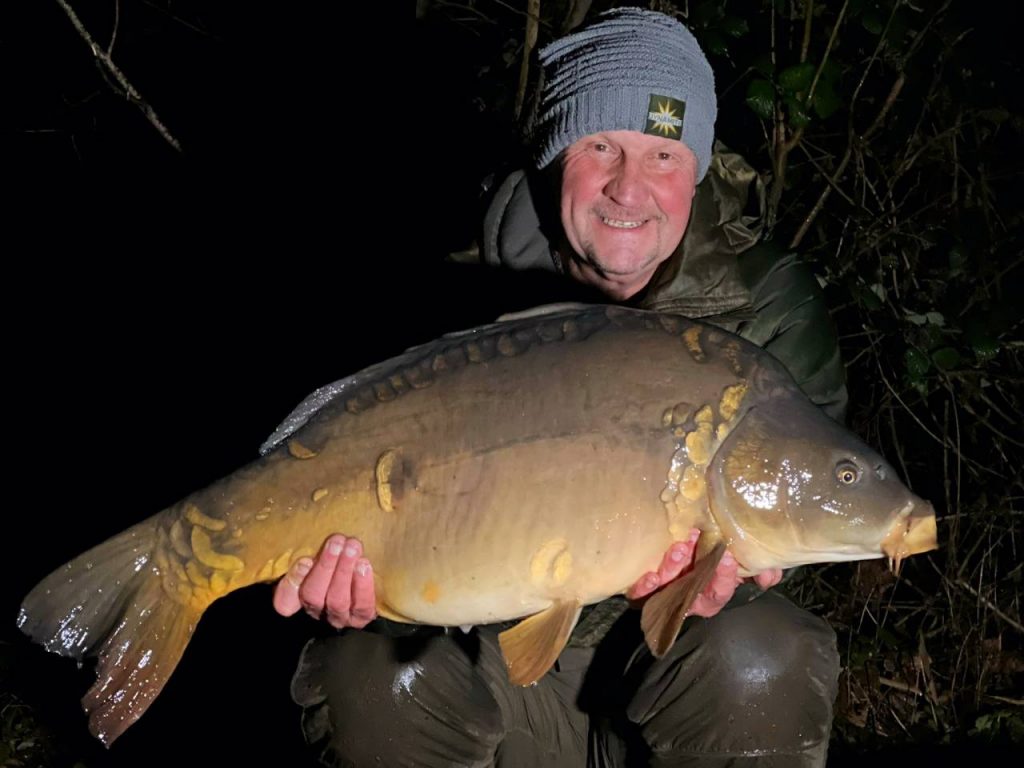 …followed by a cracking mirror of 27lb!

As the lads drifted off I dried myself off and crawled back into the sleeping bag. Much like the first night however, sleep was going to be short-lived as at 1am that noisy L/H rod was squawking away yet again. This was by far the hardest fighting fish I’d had in a long time and a rather pug nosed-looking mirror was weighed at just over 30lb and I slipped it back without pics.

I was truly knackered by now and needed my sleep. I suffered a hook pull at 7am whilst chatting with Kev and Billy boy. I’m sure it was one of the newly introduced stock fish as they quite obviously have soft mouths. Yet again though, the repositioned rod took off and what was to be my final carp was a lovely VS linear at 32lb.

After this, I struggled for bites and I felt for some reason they had moved away to my left. I was proved right later that day as Terry took three in quick succession from the Stile Swim. I still went through the same motions as the two previous nights just rather hoping for maybe one fish and a big girl, as none of the 40s had shown up for quite a while but alas, this was not to be unfortunately.

Mind you, to have followed up my hit of fish in January which included the lake’s biggun in Mike’s Pet with a 10-fish trip was crazy. Oh I do love W1 North Lake!

Remember, fish clever and fish tight with very high quality bait and reap the rewards when they turn up. Now I have 3 x weeks of filming, magazine work and the Farnborough show to look forward to!