Ian Russell’s final diary entry of 2022 reflects on a superb trip to Linear Fisheries‘ Oxlease Lake with Big Rig captor Tom Doherty. Just before Covid struck, Tom had contributed a large sum of money to charity to fish alongside Ian for a 24-hour stint which eventually turned into 48-hours as the fishing was so good! Here’s how the pair got on…

December saw quite a dip in the weather and most of my ticket waters ended up with a frozen lid over them for a good few days so I hit the decorating to keep me occupied as for those that know me will be well aware that I cannot just sit around doing nothing!

Just before the freeze however, I did have a 48-hour trip over on Linear’s Oxlease Lake. My guest was Tom who had (pre-Covid time) paid Mick Dee Dee’s wonderful ACA a fair amount of money to join me for 24 hours which turned into 48 hours in the end.

Now Tom a few years ago you may remember caught a rather large carp called Big Rig from the Avenue, but unfortunately for Tom the rejoicing was very short lived as the very nasty side of our Sport as well as a couple of companies turned Tom’s result into a very nasty witch hunt with threats to himself and his family. 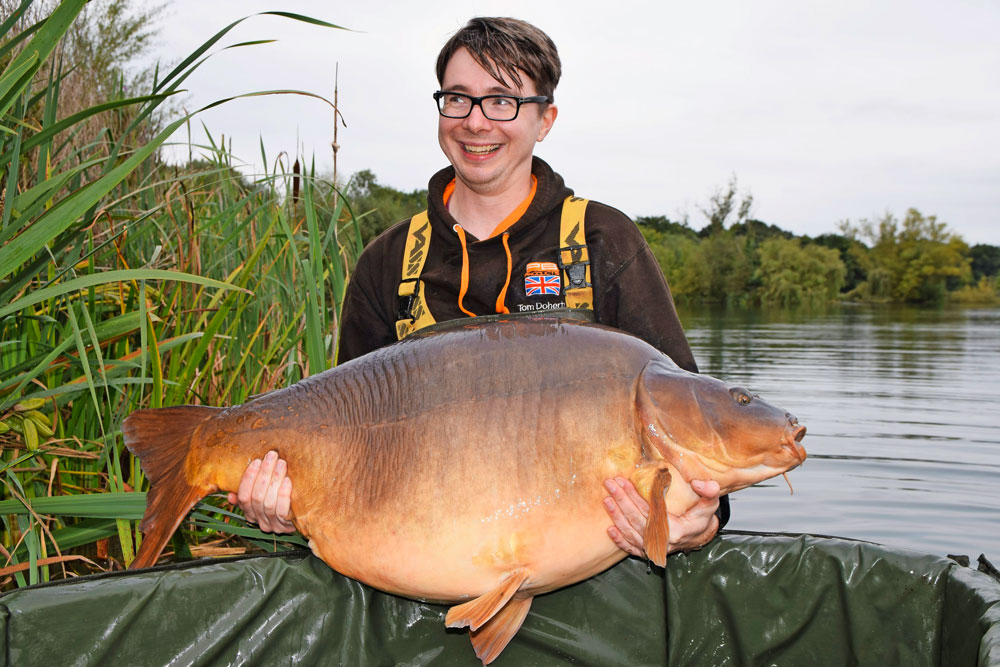 To you guys… this is FISHING! Please hold your heads in shame!

So Tom literally stopped fishing for a good while before regaining some interest, hence paying a Charity to join myself on a trip. Enough of that and onto the trip itself…

Linear’s Ian and Chris had very kindly said there would be no day ticket charge for Tom as they acknowledged he had already contributed enough. So we met in the Hardwick car park and decided to first have a wander around Oxlease.

All the lakes had been fishing slow due to the rapid drop in temperature so we were amazed to arrive at the far end of the lake to find lots of carp present with their backs out of the water along with swirling and jumping about all over the swims opposite the disabled swim!

So as you can imagine, 2x Barrow loads of kit were very quickly retrieved from the vans and we set up our rods as quickly as possible. Tom in the left area and me on the right.

No leading around was required as we let the Carp dictate where we would cast. Our hookbaits were a mixture of Maggot rigs and or Dynamite Pineapple and Banana 12mm pop ups with again PVA bags of maggots attached to them. 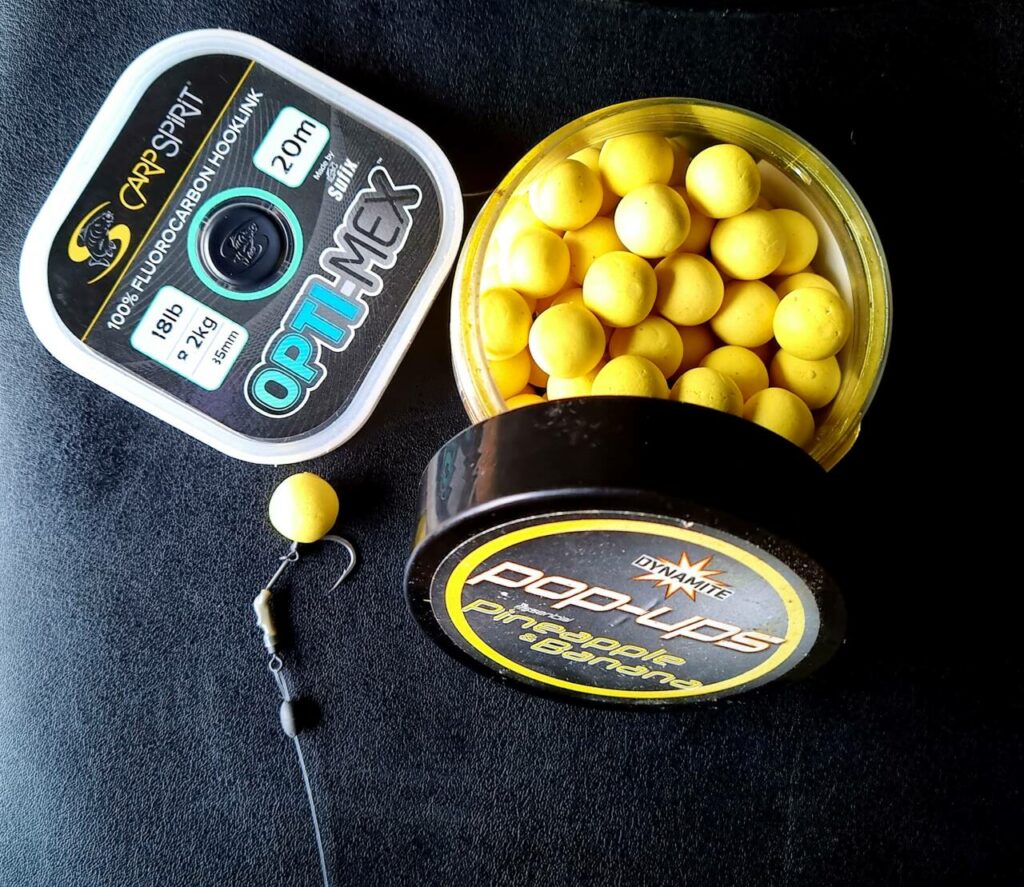 Such a good hookbait choice in the cold!

Before my third rod was out the two I had already positioned were off but these were very, very, very out of season Tench but they were good-uns as around the 7lb barrier. 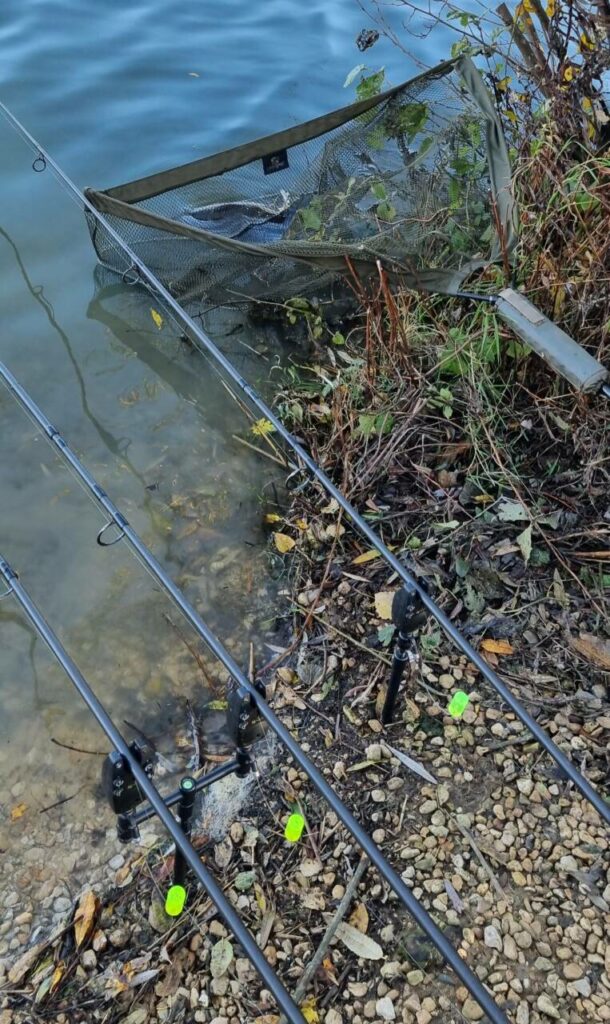 So all rods were re-sorted before Tom was into what was clearly not a Tench as this literally flat rodded him several timess before a very large scaley carp was netted. By the look on Tom’s face this carp had well and truly re-lit his fishing fire. At 34lb 4oz I was not surprised! 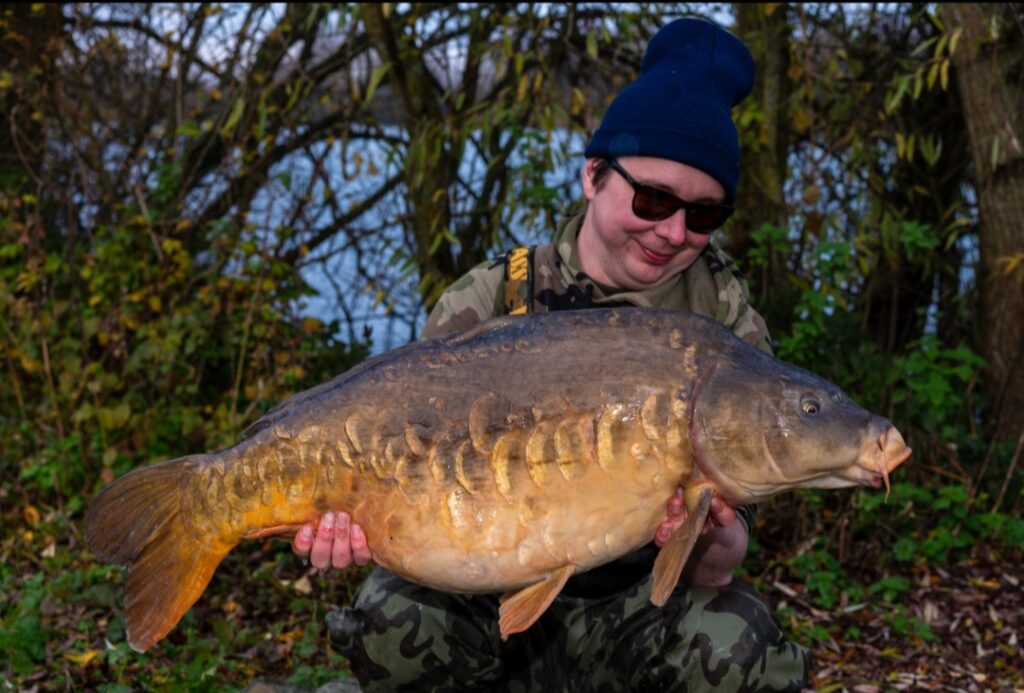 34lb 4oz and the fire was very much re-lit for Tom!

Tom then had a Tench and I had 2 more as well. This was very bizarre for this time of year! Oxlease Lake is never normally like this in the cold.

I was next to chip in with a 28lb 8oz mirror and a 13lb common before the area wised up to our presence and fell quiet for a few hours. 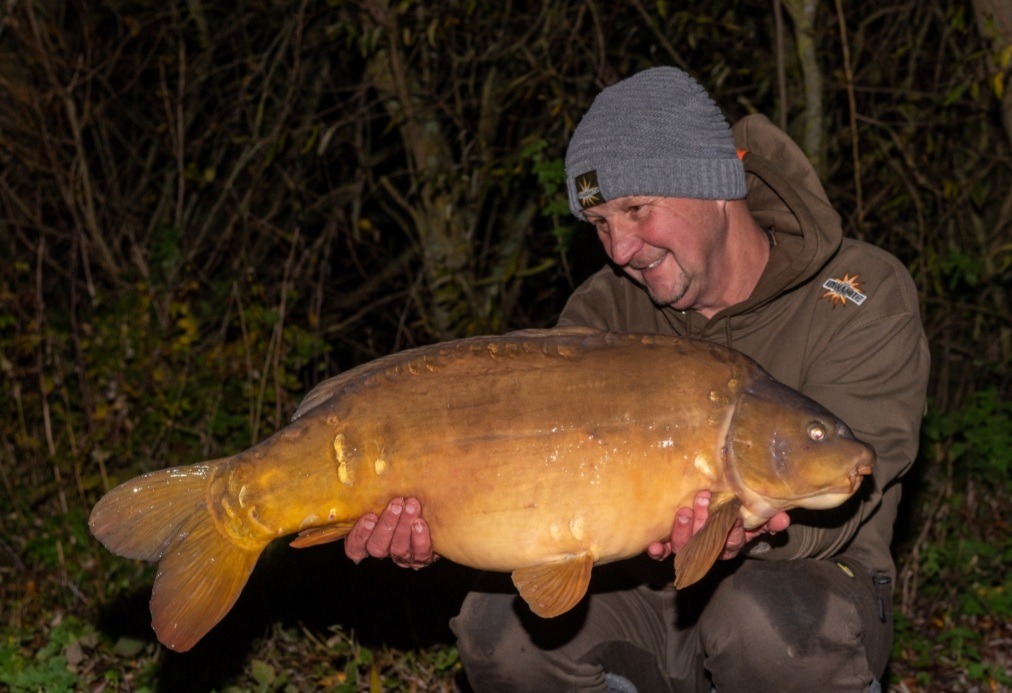 After the tench hit, this 28-pounder finally obliged for Ian.

In fact, it was early morning before our next visit from a carp and it was Tom again with a really mental 27lb mirror. We then decided to extend our trip from 24-hours to 48-hours as we both knew there were more fish to be caught.

All the bites were evenly spread between Maggot rigs and my 12mm pop-ups but they all carried bags of maggots. Tom had yet another Tench then I had a pair of 28lb mirrors before evening arrived and all fell quiet. 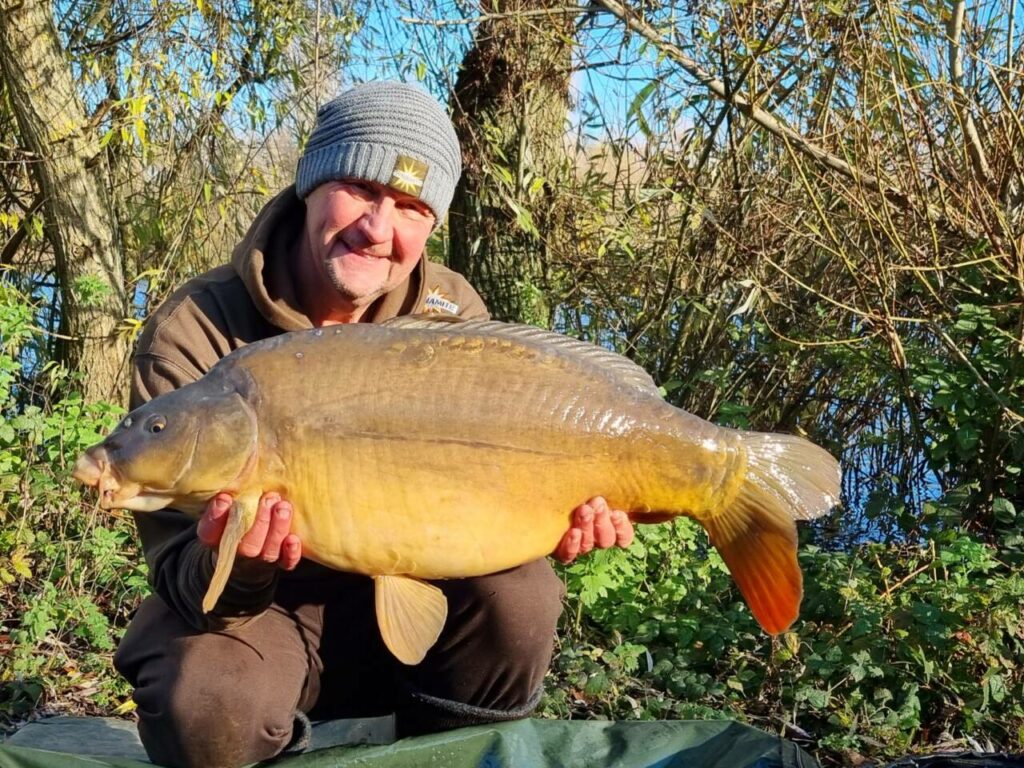 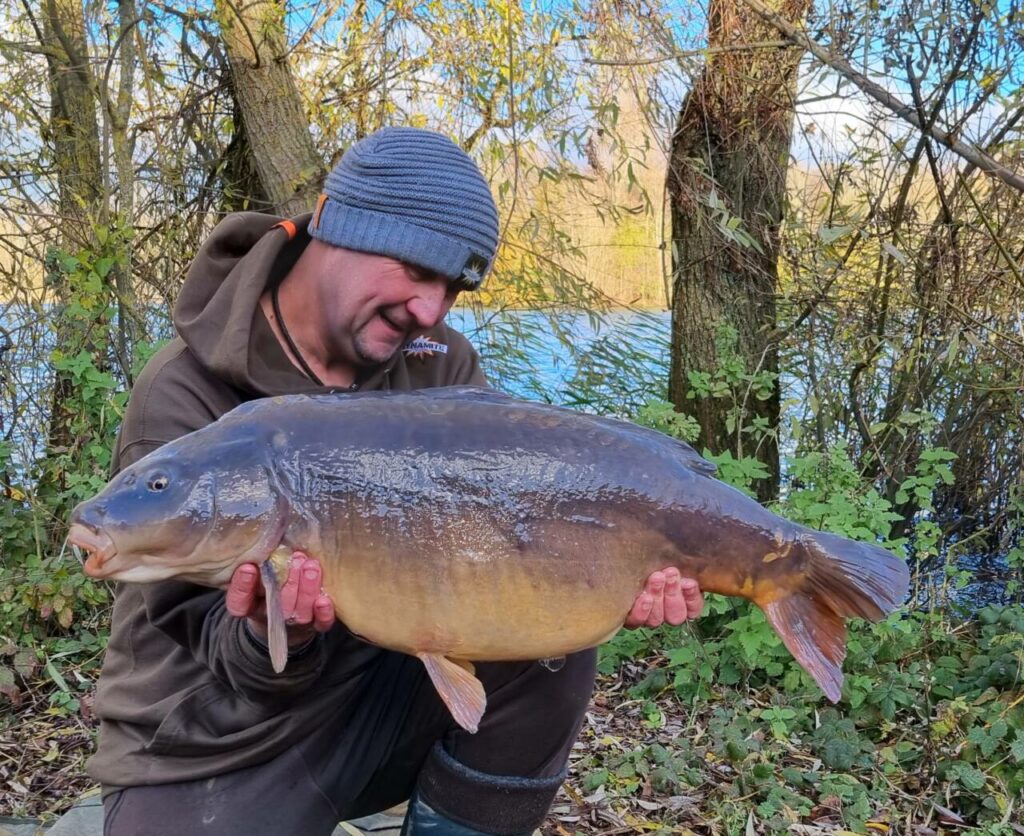 The temperature really plummeted and by first light everything was completely white with frost.

As everything defrosted, my rods produced a 25lb mirror and a last-gasp Tench as we packed away. 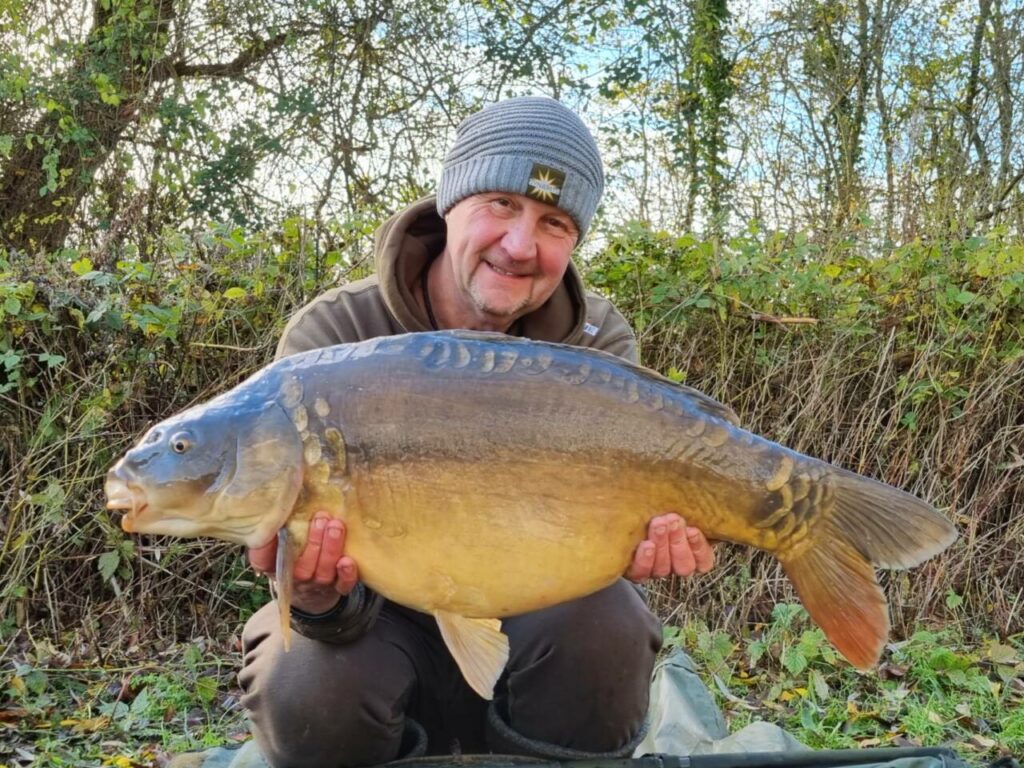 A welcome end to the trip at 25lb.

What a great trip – 7 carp and a hatful of out of season tench from Oxlease Lake for us both. The most important part was seeing Tom, who had clearly and understandably fell out of love with our wonderful pastime, smiling from ear to ear having totally enjoyed the banter, the angling and also the massive pizza we had delivered on the second evening! So Tom I salute you my friend!

A big thanks to Ian and Chris at Linear for supporting as well, I love the place.

Now for me im off to Horton Church Lake tomorrow in search of a Hippo-sized carp. I really should pick a much easier Winter venue shouldn’t I? NEVER LOL.

Tight Lines and stay safe out there guys and girls!