Specimen hunter Kevin Sanders takes us through his winter campaign and discusses the tactics and baits that helped him bank a flurry of specimen fish – including zander, dace and chub. Will he catch the specimen of a lifetime?

Zander are probably my favourite species of fish. Growing up in the 90’s, I saw pictures of massive Fenland Zeds in the weekly mags and was inspired to try and catch one. On my first trip (20 plus years ago) I was lucky enough to catch two including a double weighing 12lb! Well, in all those years I still have not caught one bigger. That will be my target next Autumn. Fingers crossed. 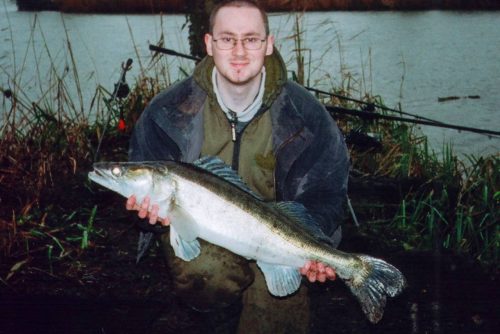 A PB eluded me again this season but I did catch some lovely Fenland Zeds on the few trips I had. I have really got the lure fishing bug and had a few trips to one of my local rivers to see if I could tempt anything. Even a small one on a lure would be a great result!

Eventually I found bites were not hard to come by as there has been a boom in Zander numbers in recent years. They are mostly small fish but there are good fish among them. The section of river I fished was very snaggy. I had to persevere with weedless presentations to reduce the amount of lost lures.

After a couple of fruitless daytime trips I decided to have a night session. I was using a UV shad and flavouring the lure with Ultrabite to give myself as many edges as I possibly could. I got to the river an hour before dark and worked my way along until I got to my favoured area.

There were a couple of moored boats that I had bites at previously and this is where I would concentrate my efforts. It was now dark and I had a hit on my lure. I was not using a stinger due to the snags so I was expecting to miss a few.

The next cast I had a hit and when I struck, my rod took on a healthy bend. I drew the fish closer to me praying the single hook would stay in place all the way to the net. After a minute the zander was in netting range and I engulfed it first time. Although not a big fish, this was my first lure-caught zander at night so the size was unimportant to me. 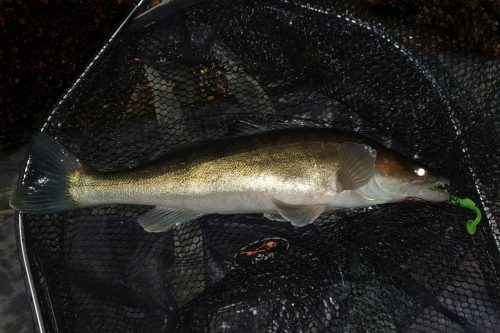 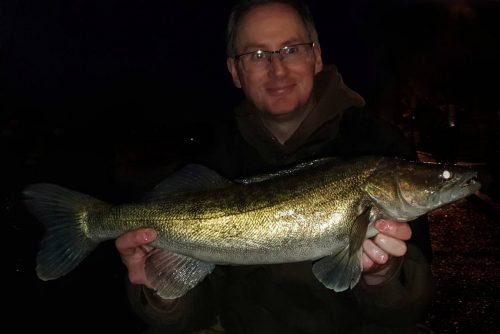 Not long after I managed a couple of trips bait fishing for zander. One of these trips did not start so well with my chosen venue not “feeling right”. I decided to switch to a different Fenland River and it turned out to be a good decision.

There was a storm raging and I was questioning my sanity to be out in it. It was absolutely brutal! I was just about able to fish a quiver tip and make out the odd bite.

This was fished with a feeder full of chopped fish and glugged with a generous amount of Dynamite XL Liquid Predator for massive amounts of attraction. 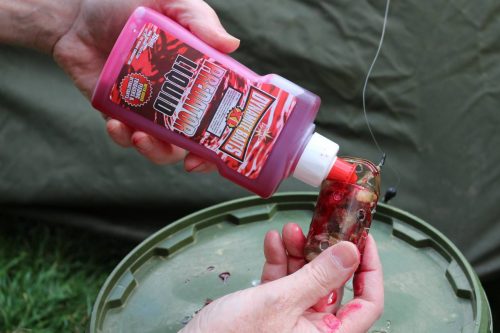 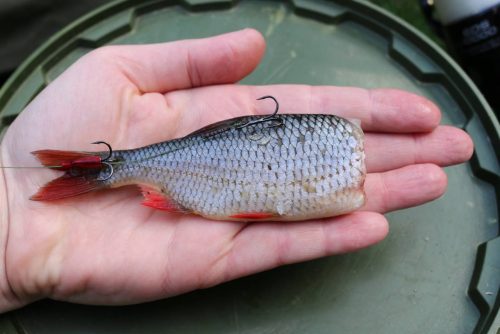 A headless roach makes for a superb zander deadbait

My first bit of action came an hour after dark with a small zander of 2lb. It was a good omen that the zander were on the feed in the rough conditions. I stuck it out and a couple of hours later I had another take, this time pulling into something much heavier. After a minute I saw a pair of shining eyes in the torchlight as the fish went crazy on the surface! It was shaking its head violently to rid itself of the hooks.

Luckily the hook-hold was good and I shuffled a large zed into my net. I knew it was a good one and let out a ‘wahoo!’ The reward was an immaculate beast of a Fenland zander weighing 11lb! After a false start and difficult fishing conditions this certainly made it worth the effort. 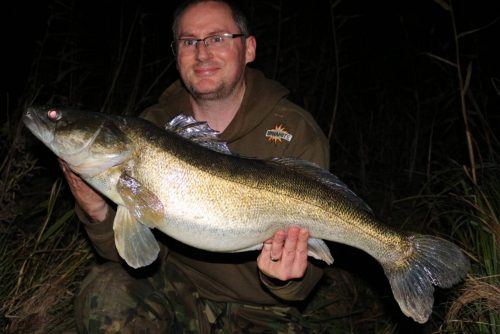 This 11lb zander was rich reward for Kevin’s efforts

Dace are a species I have not targeted for many years. I use to fish one of my local rivers in my younger days and caught them by the dozen. In fact, one of these rivers used to hold the record for the species. So, a plan was made to meet my mate Giles for some socially distanced maggot bashing in search of some silver darts.

I had dusted off my centrepin reel as it would be perfect for the fast running shallow water. I stood in the water in my wellies and soon had a 4 gram loafer float gliding down river. A bite first cast and a fat dace was soon handed out of the water. It was almost a fish a cast with a mix of dace, chub, roach and even a beautifully spotted brown trout. Some of the dace were sizable specimens with some being long and some being short and fat. I would love to catch them at the end of the season as who knows how big they will be a couple of months later? 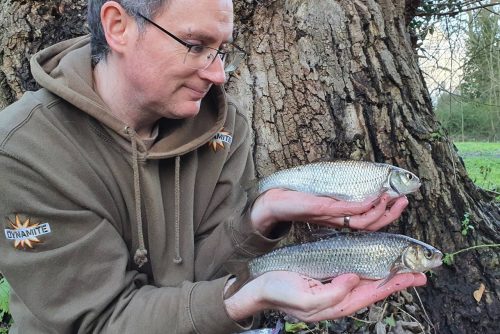 A bristling pair of silver darts for Kevin 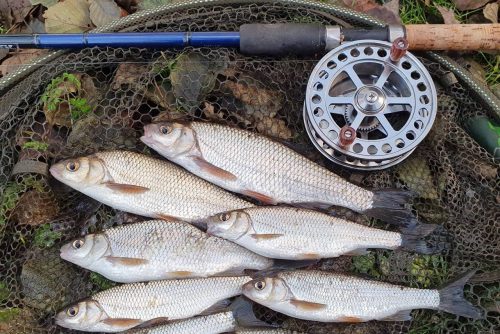 My first Chub session of the season was on one of my local rivers. I was taking my neighbour as he had never caught one before and I wanted to help him out. Mince and steak are used a lot on this river so I wanted to try something a bit different. I would use a standard tactic of liquidised bread in the feeder and flake hookbait. But what I did do was add some Dynamite baits XL liquid predator to give the bread lots of attraction.

It was getting towards dusk when we set up opposite a couple of boats. I was casting as tight as I could without hitting the boat and upsetting the occupants. I would leave the bait out for 15 minutes before casting again.

Just as the light had almost gone completely, my tip hooped over which was the signal for me to strike! I hit into a solid fish and did not give it an inch as I needed to stop it going under the boat. I soon had it away from the boat and heading towards the waiting net.

Thankfully there were no marginal snags in this swim so I had the fish netted in no time at all. A big chunk of bronze was placed on the mat, unhooked and weighed. At 4lb 15oz I was very happy and slipped it back after the obligatory pictures were taken.

Unfortunately that was the only action of the evening, but at least my neighbour saw a big chub, even if he did not catch one himself. 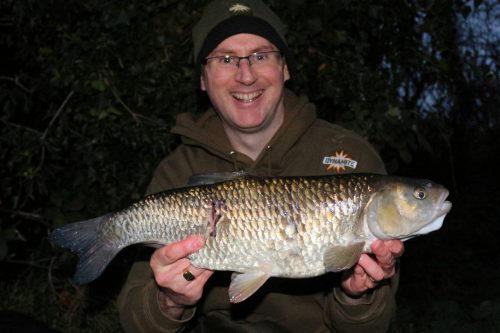 A bit further afield is the River Lea. I caught my PB of 7lb 2oz here last season and it is home to much larger specimens than this! I wanted to try something different as I was bored of sitting and waiting for a fish to come along. A friend of mine, Simon, had been catching some lovely fish trotting maggots. This was something I had not done before so was excited at the challenge.

Fishing 4lb line straight through to a small size 18 hook and single maggot was about as different as it got compared to 10lb line, 2oz lead, size 6 hook and a boilie! I would be feeding maggots glugged in Dynamite baits XL liquid worm as I thought this would add so much attraction to the maggots that the chub would not be able to resist.

On my next trip to the river the conditions were great. It was a cool day so the small fish were less active than normal. I hoped it would give the bigger fish a chance to get to the bait first. I tried a few swims without success, but this did give me a chance to practice trotting the float down the river until a fish slipped up. The fourth swim I tried a chub did just that.

I pulled into my now sunken float and my rod took on its full test curve! I had the clutch done up tight as I was trotting the float past some snags and did not want the fish finding sanctuary in them. I just held the rod bent double until I managed to pull it clear.

From then on the fish just plodded in front of me for a few minutes making the odd surge. With no marginal snags to worry about I was happy to let the fish do this. It went in the net first time and a chunky fish was beaten.

At 5lb 8oz I was very happy my first attempt had been successful. It could have been more successful, but not long after I started fishing again my rod snapped! That was the end of that then. I got on the phone right away and ordered a new top section for my rod. It was on a 48-hour delivery so I was definitely going to be back soon! 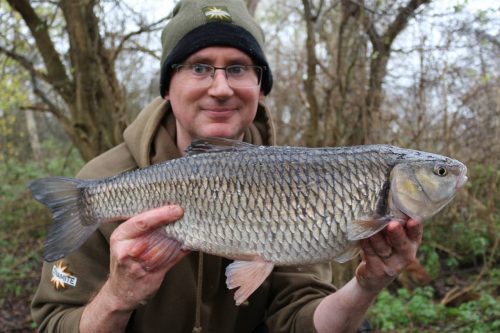 Despite snapping his rod, Kevin still managed to bank this chunky 5lb 8oz chub during his session on the float

Well, the day after the new top section arrived I was back on the river for an afternoon session. I employed the same tactics and fed the glugged maggots and carried on where I left off. Soon after casting in I had a bite, which gave me an action replay of the last trip. A 5lb plus chub was landed and the action didn’t not stop there. I had another two 5lb plus chub in the next few hours up until the light faded too much to see the float. I left very happy as I had got to grips with a new method, and best of all, I did not break any rods this time!

My next chub trip came about due to accidentally hooking, and losing a good chub while lure fishing for perch. It was a deep pool on my local river and not a swim I had chub-fished previously. I knew there was at least one good fish there so it was worth a try for a few hours after work. I cast a feeder filled with minced steak glugged with the XL Liquid Predator, and a cube of the Frenzied Krill luncheon meat on a size 4 hook. 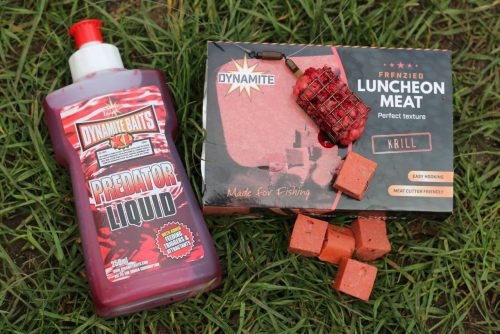 Dusk was starting to fall and from previous trips I knew this was prime time and confident of some action. This confidence was proven right as after a few casts around the swim my quiver tip hooped over and prompted me to strike.

I had already been snagged on a previous cast and of course this fish knew where that snag was! It headed straight for it so I just put the brakes on to steer it clear of danger.

Once this was successfully done I managed to net the fish with no issues. It was a chunky looking chub and certainly a better than average sized fish. It weighed in at 5lb 2oz and definitely a sign I should give this swim more attention in the future. 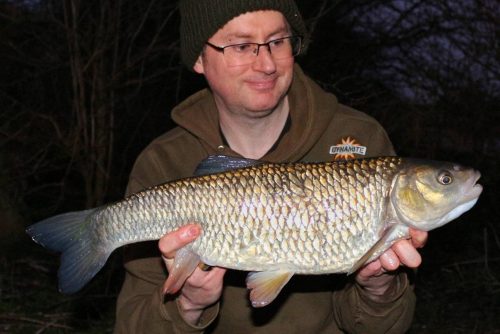 Kevin ended the session with this plump 5lb 2oz chub