Archie Braddock’s ‘Do it All’ Feeder Rig

Archie Braddock’s ‘Do it All’ Feeder Rig

THE BEST OF BOTH WORLDS

In 1991 I wrote a book called Fantastic Feeder Fishing. This started the era of dead maggot fishing which continues to this day, and the chapters on flavours also inspired anglers to start experimenting. Yet the main topic of the book was of course feeder fishing, specifically groundbait with (open ended) feeders. I had done years of testing with various mixes and additives, and still do.

Over recent years feeder fishing has evolved; the Method came along, which brought me some big tench, but the biggest impact was made with the helicopter rig. This usually includes a maggot feeder (block end) on the end of the line, with a short hooklink a few inches above, which is free to spin around the main line on a swivel. It was, and still is, a brilliant setup. Basically a bolt rig, I have used it to take all manner of species, particularly big stillwater roach. Its only drawback is that, with the feeder at the end of the rig, it has to be fished upstream in a river or the presentation is all wrong. Nevertheless it has produced everything  from bleak to barbel for me.

Now let’s get more up to date, in fact to the scorching summer of 2022, with its record breaking temperatures and low water levels. The Trent started to drop during April’s dry month, and continued to fall all the way to the opening of the river season. My usual early season tactic of stick float and long rod was just a struggle in a river that was too low, too slow, too clear, and too warm.

Six a week Steve was catching a few reasonable roach on the pellet feeder so I followed suit, but even that slowed down.  The maggot feeder only brought an endless run of small perch; there seems to have been an explosion of these in the Trent.

This was proving to be the worst start I’d had on the river for more than twenty years, so it was time for a serious re-think. With water temperatures hitting over 70ºf (21ºc) faster more oxygenated water was needed, so I decided to start again and concentrate on a stretch that was no more than six feet deep even mid-river, and which ran at a smooth pace over a gravel bottom. I also needed a feeder setup that I could cast anywhere, not just upstream as with the helicopter rig. I’d never used an inline feeder before but provided the hooklink was kept short, say eight or nine inches, I would be able to fish at various angles, upstream and downstream. After some trials to get it right it worked amazingly well, and totally changed my fishing. 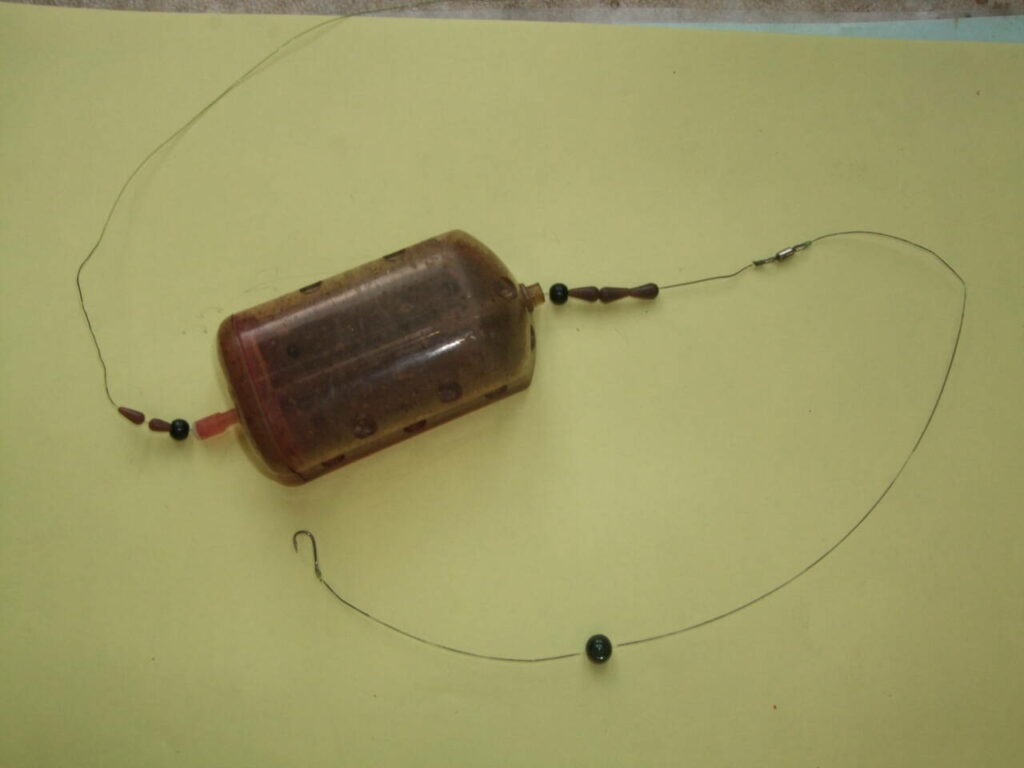 The photo shows the feeder which is a Drennan flat inline. It sits between float stops so it can easily be moved up or down the line which in effect lengthens or shortens the hook length. I used feeders with a minimum weight of 2oz, often 2½oz, to improve the self hooking of what is in effect another bolt rig. Below the feeder I tie a swivel to the end of the line to which I tie the hooklink. I’ve used sizes from 16 to 12 in both straight points and in-turned. Surprisingly, the in-turned in a size 12 has proved to be the most effective: the fish seem to have no fear of the rig and pick up the bait readily. The line I use for these short hooklinks is Sufix Advance rated at 13lb and in 0.25mm diameter.

What’s that? I can imagine your shock at this heavy hooklink, but it’s needed. Short links like this can easily break using fine line, and also easily tangle. The stiffness of this thicker line prevents tangles, and helps hook the fish; they cannot easily blow the bait back out of their mouths. To further help with self hooking I put a shot, a B.B. or even larger, about two inch from the hook. Incidentally I’ve tested this line by tying on a strong hook then attaching a bucket full of feeder and leads weighing 10.5lbs. It lifted the lot off the ground without breaking. I also use the same line on the reel, which gives you a very strong setup: enough to ensure you will land any stray fish like carp or barbel that may turn up.

I now have a rig I can cast anywhere, upstream or downstream, across to mid river, or down the near bank. I can quickly extend the hooklink to two feet, three feet or even four if needed. Matchmen could set up spare hooklinks with a loop, and use a loop to loop attachment using the swivel. You can use a quiver, but I just use the rod top for bite registration: some of the takes are so violent the bait is ripped off the hook.

My move to shallower, pacier water found the fish and I caught most of the regular Trent species, but dace and perch were the main catch. The perch sometimes ran to a pound and a half, and the dace were real beauties. Many of them were half a pound or more (I weighed several) and went up to eleven ounces. I was catching regularly, but I made two discoveries which brought non-stop action on some of the hottest days with the lowest levels I’d ever seen in a lifetime on the Trent.

I’d been using single red or white maggots on a 12 hook, but it was slow going in the heat. Trying anything, I looked for very small red maggots, as there are always some in a pint, and put two on the hook. First cast, a slam on the rod resulted in a cracking half pound dace. Next cast a twelve ounce perch, and then another good dace. The presentation looked strange; two pinkie sized maggots on a 12 eyed hook tied to heavy line, but the fish didn’t think so. I ended up with thirty or more nice dace and perch caught in scorching sunshine. Pleased, I returned two days later – even hotter, river lower, and bites had slowed again.

I had taken along some groundbait in case, a mix of two ‘leftovers’ from the freezer, half Red Krill groundbait and half Source groundbait…I even flavoured the mixing water with Fish Gutz. In desperation I filled the feeder full of mixed white and red maggots and them crammed on top a wodge of this stinky mix, which pushed the maggots down tight: none fell out on the cast. I found out later by dropping the feeder into shallow water that the compressed maggots rapidly pushed out the groundbait before tumbling out themselves. Would this combination offering really work?

That first cast saw the rod bouncing in my hand before I could put it on the rest, one of those quality dace was soon in the net, and so it continued. Luckily I was fishing under trees as it was one of the hottest days ever recorded in this country, with a water temperature in excess of 21ºc. Yet I had a strong bite within twenty seconds or so on every cast hour after hour, until I was too hot to fish on.

Dace, perch, odd roach and skimmers, even chublets. It was the same on future trips, no matter how hot and low the river got. I did try other groundbaits, and discovered that Red Krill laced with 10% Crushed Hemp worked really well, as did Hemp and Halibut. There are plenty more Dynamite groundbaits to try, and I have no doubt they will also do the business. A good tip is to add a teaspoonful or two of the dry groundbait mix to the maggots the night before. They will eat it and taste of it when taken by the fish. 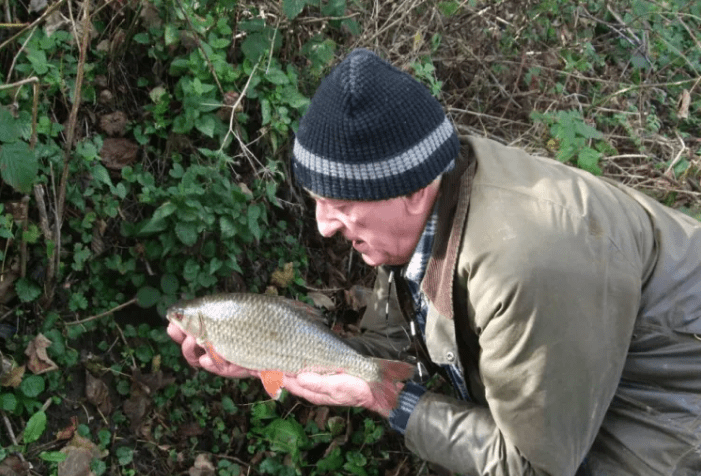 Over the years I’ve had some great rigs and some great catches, and thought I’d never improve on them, but now I have a rig I can cast anywhere in the river, and catch, in what I once considered useless conditions. I am presenting both a groundbait feeder and a maggot feeder combined, and I don’t see how it’s possible to get bites on a feeder faster than I have been doing.

It really is the best of both worlds.