Carp angler Russell Crisci shares his experience of carp fishing a new club water for just the second time. Here’s how he got on…

“I arrived at my new club water for only my second 24-hour session. The water is only small and holds some lovely looking old carp, no monsters but some crackers in there. It is pretty weedy however which can make fishing tricky at times.

After having a cuppa with my mate who was already set up, I wandered off to find some fish.  It wasn’t long before I stumbled across a few and I began watching them as they entered a large reed bed and spent most of the day tucked up in the safety of the reeds.

I quickly clocked that the reeds kept knocking as they moved through and I noticed they were leaving a small channel within the reeds which prompted further investigation!

After a bit of casting I managed to locate a small silt area in between the eel grass just as the fish exited the reed channel, so that was where I was going to set a trap for one rod. The other was located on a small gravel spot in the corner I was fishing amongst weed.

Two multi rigs were baited with 12mm Red Amo pop-ups and dispatched just before sunset to both areas after baiting with some whole and chopped CompleX-T and Source boilies, Frenzied Hempseed and XL sweetcorn – all off which were pre soaked in the Tuna & Shrimp extracts.

The first bite came at around 3am on the reedbed rod and after a frantic fight I netted a small double figure common which I quickly returned before putting two pouches of chopped boilies back out on the spot. The re-baited rig soon followed and I jumped back into bed for a few hours’ shut eye, or so I’d thought…

At about 5am the same rod was away again and this time I knew I was into a much better fish as it flat rodded me and charged up the channel to my right before I managed to slow it down. Gradually i led it back in front of me and it was plodding around under the tip before slipping into the net.

I left the fish in the net while I readied the camera gear for some self takes and I was over the moon to see a lovely dark old common carp amongst the net folds. This was my first proper original from the lake and what a stunner it was too!

I didn’t bother to recast the rod that morning as I was leaving in a few hours so I decided to wrap up and have a quick catch up with my mate before I hit the road home.” 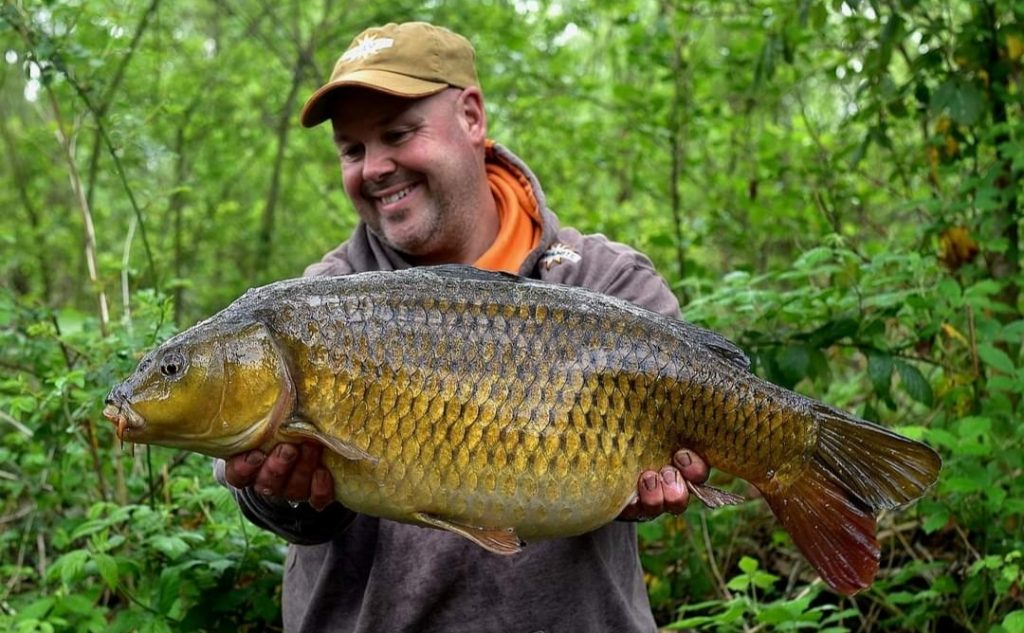 A lovely old common from the new club lake.