Well this winters angling just seems to go from strength to strength. My next Horton Boat Pool trip was to see me set up yet again on the concrete and unbelievably I was again the only angler on the lake.

Five carp were landed during this 24hr trip with the largest being a 35lb 12oz zip linear and also two great big Eels ( yuk ). To receive this much luck on The Pool was beyond belief but I was not about to complain. 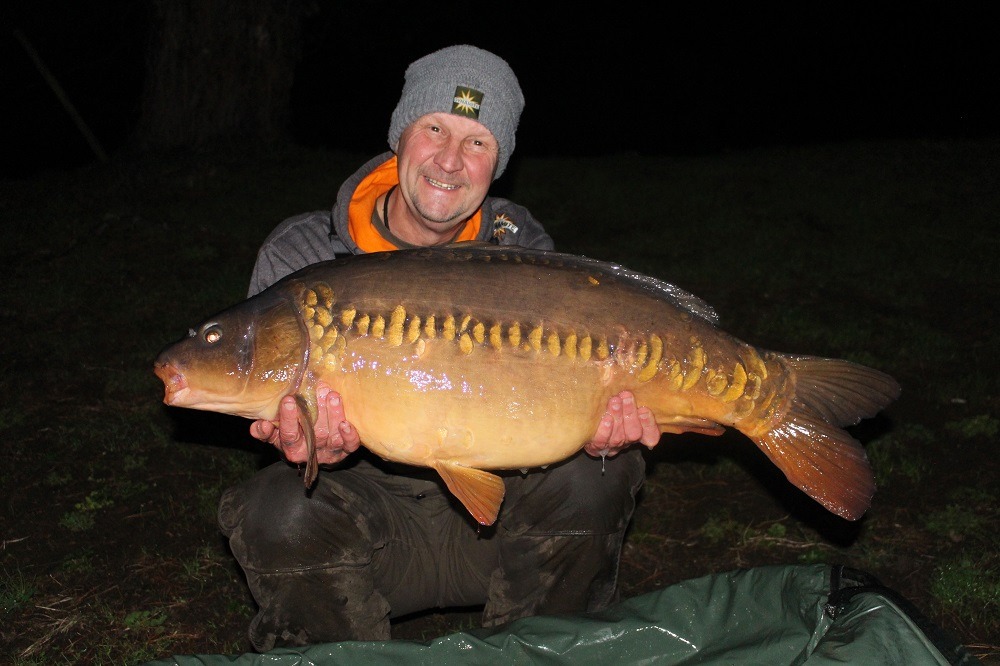 Myself and Michael Poulter’s dads remembrance trip was next up and the lovely Terry Donaldson invited us back to Willow Park Fisheries for the second year running. We set up in a peg called the Pig Pen and began angling.

Short zigs were the order of the day and before long I nabbed a mid double mirror and lost a similar sized carp by the net. 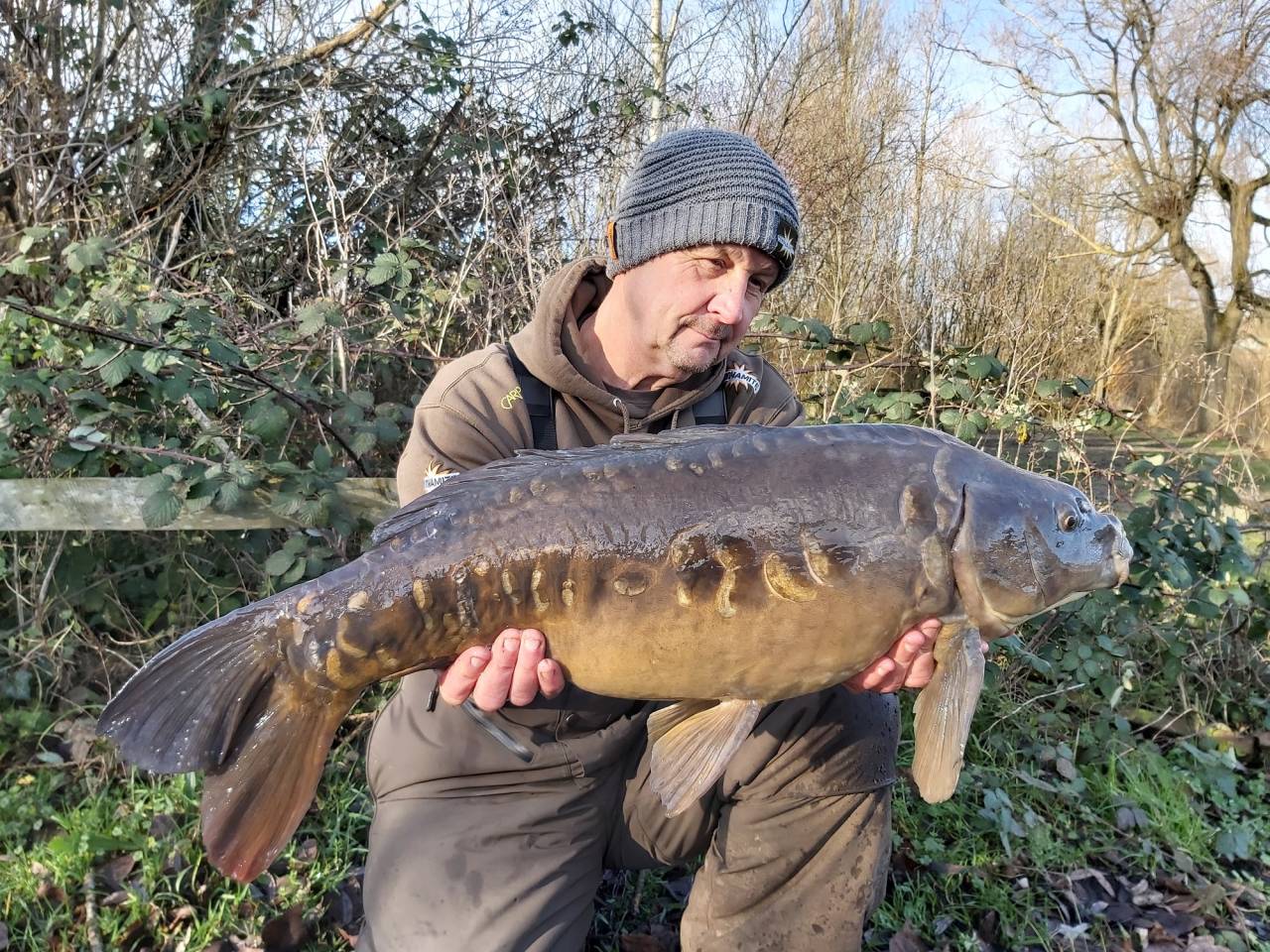 first blood on a zig

The evening saw us apply a bit of bait and a mixture of Frenzied Hemp, XL Corn and crumbed up Monster Tiger Nut boilies were spombed over our areas.

A rather large curry was consumed and bed it was. At 2am and my area came alive and as the light came at dawn the action dried up. I,d had another four carp including a 21lb Common and a beautiful 21lb Fully scaled mirror. What a great trip this was I do love fishing with Michael as the Banter is awesome. Here’s to next year my Friend. 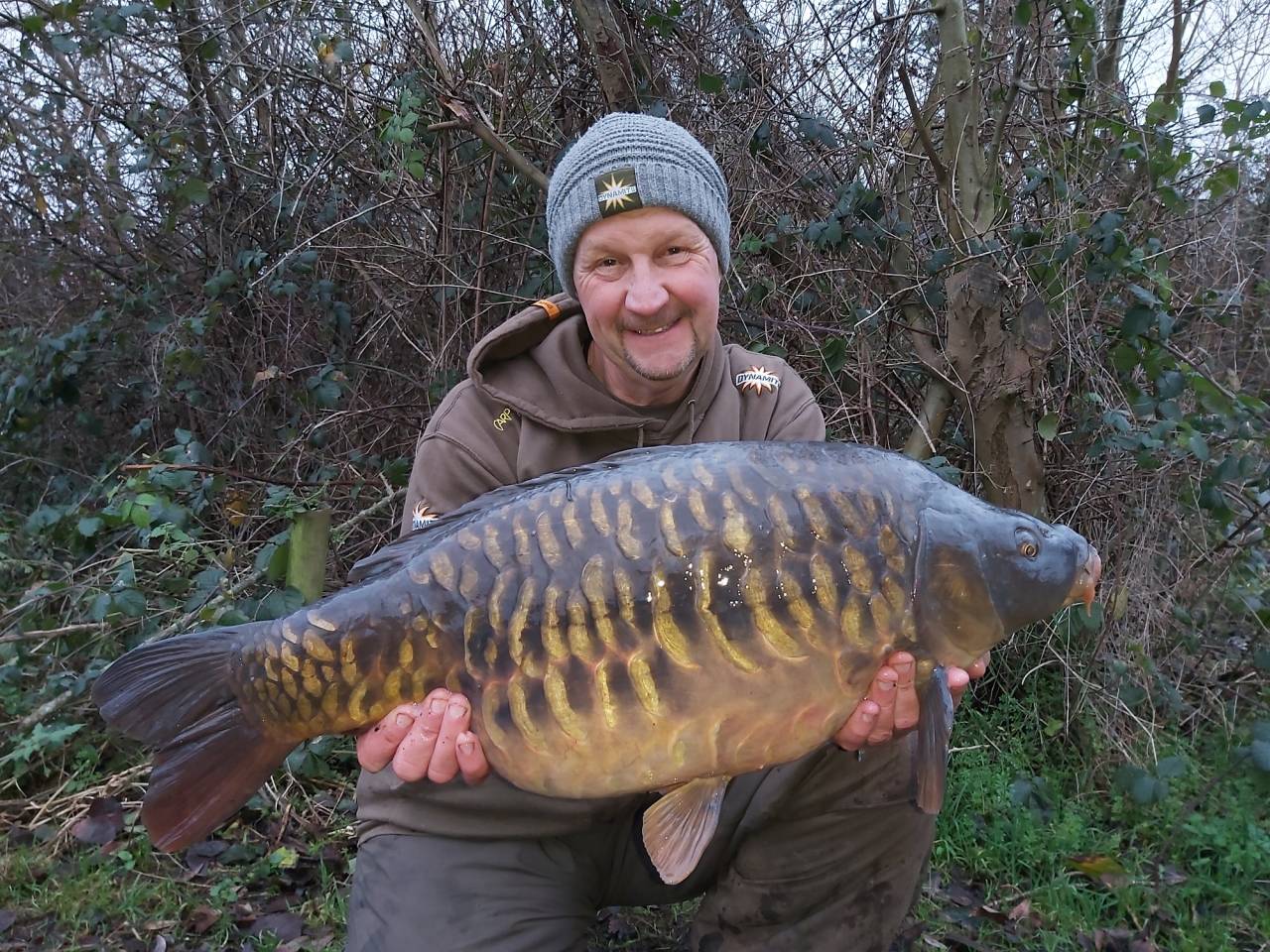 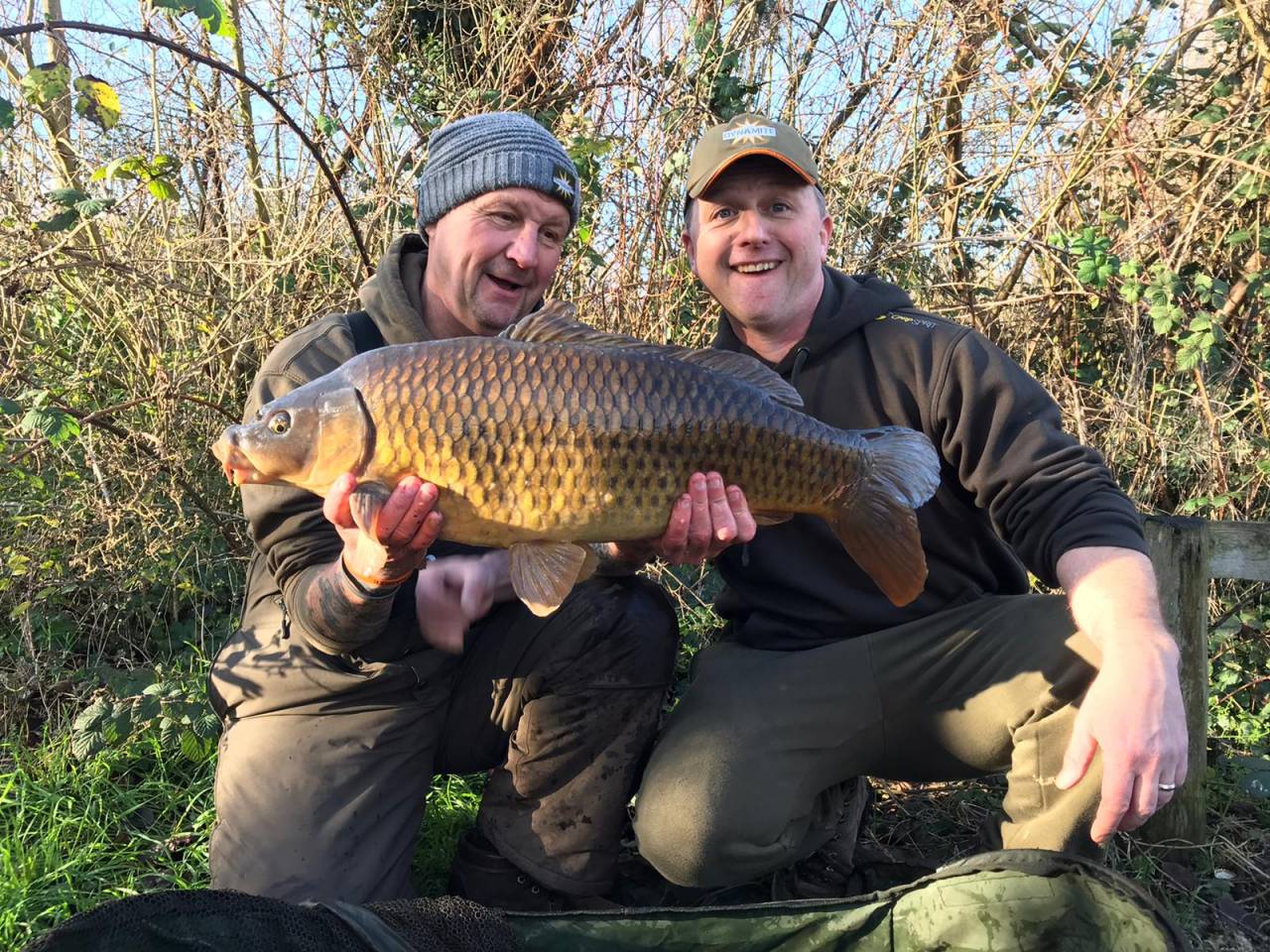 me and mad michael

Zwolle show was next and this was to be my 10th time at the great show but my 1st working for Dynamite / Carpspirit so I was really looking forward to meeting all the European Consultants. Myself, Daryl Hodges and Chris Smith from Dynamite traveled out together and the overnight Ferry was a good laugh with Daryl answering the multiple choice pop quiz questions almost before they were up on the screen. 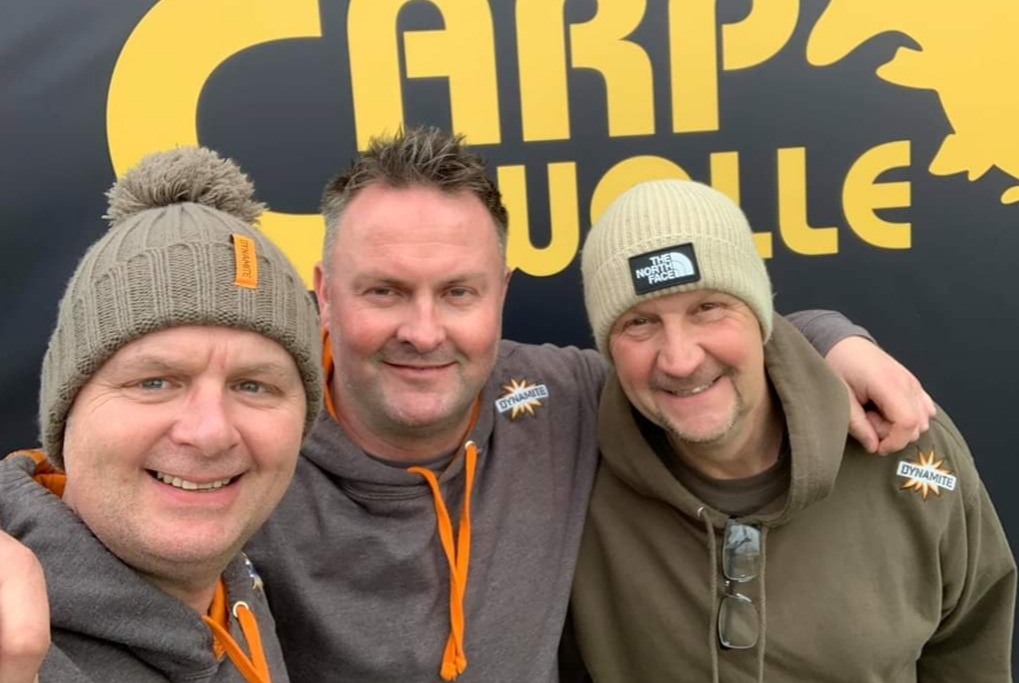 Chris, Daryl and me at Zwolle

Soon enough we arrived at Zwolle and set up the stand. The weekend was as you would imagine absolutely manic but it was lovely to meet all the guys and girls on the team. Kristof Cuderman is among the funniest people I have ever worked with. Soon enough we were back on the ferry heading home and to say we were tired would be an understatement. 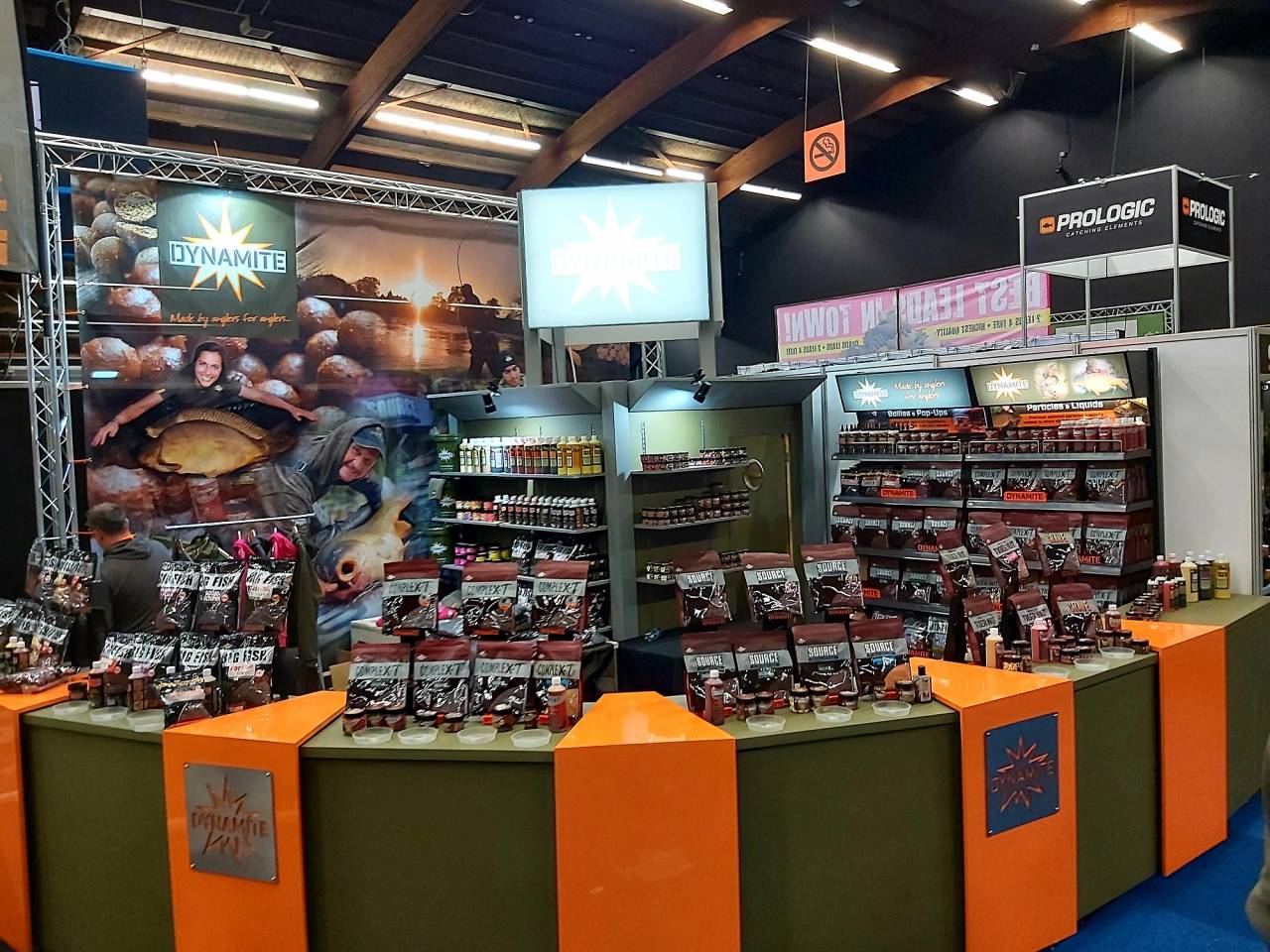 All ready to rumble at Zwolle

A tutorial was my next work commitment with 2 lovely lads Paul Streeter and Craig ( the Viking ) Nash on Linear Fisheries Brasenose 2. We spent all day going over everything carpy and before I left they each deposited a bucket of Frenzied Hemp, XL Corn and Monster Tiger Nut boilies crumbed and flavoured with our Garlic Liquid Carp Food.

This is such a great additive to use with Hemp , and the carp absolutely love it. I shot off at 5pm to do the night on the Boat Pool leaving the lads to it. I arrived about 7pm after doing the wacky races all the way from Oxford to Horton.

There was only one angler on so this time I set up in a swim called the Chair. Rods on my usual spots by 8pm and at 9pm I was away and into a really hard fighting carp. This turned out to be a re-capture of the earlier zip linear so he was popped back. I’m not into re-captures but you cannot choose what picks up your bait.

Id already put out a kilo of Monster Tiger Nut crumb over the area so put another kilo out. 11pm same rod and a lovely 33lb Mirror was photographed, it was absolutely bloody freezing. 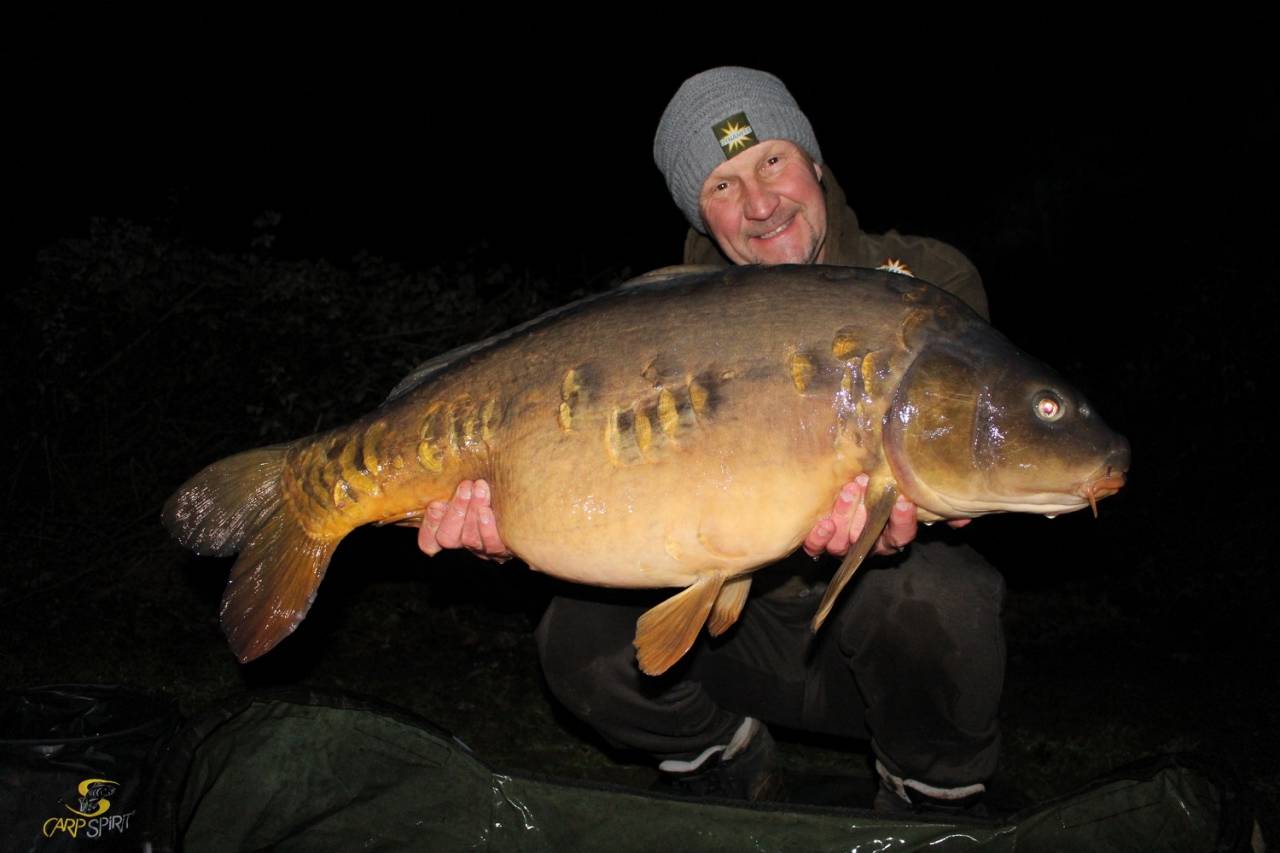 Another Boat Pool thirty on the MTN

That was it for me for the night and at first light I messaged the Brasenose lads to see how they had got on. Well to say I was chuffed was an understatement as they had a right result with several upper 20s and some smaller ones aswell. You see unlike other tutors I don’t just get the lads to catch carp after carp as very little gets learnt from that as we can all reel a carp in. I choose to start from scratch and work towards a result at the end of it. Great work lads. Until next month, Tight Lines People.