Following his most successful year as a specimen angler, Matthew Fernandez reflects on the sessions and catches that helped him achieve third place in the 2020/21 Drennan Cup season…

Like everyone else, I was eager for Boris to ease the lockdown restrictions so we could all get back outside, enjoy some normality and have a break from the terrible news that Covid brought with it. Fishing is an outlet for me and I really had missed it. May was on the horizon and fishing was given the green light just in time for spring. Spring for me means tench! So tench fishing it was. I didn’t waste any time and booked onto my local syndicate lake. Just being out there was the best feeling ever and to catch was a bonus! It was my first spring fishing with my dog Frankie too! An adventure for us both. The weather was glorious as were the surroundings. A BBQ and some beers beside the lake helped me settle back into things too.

As usual, I put out a healthy-sized bucket of bait which consisted of a whole jar of frenzied hemp, a good few handfuls of 6mm halibut pellet, a couple of handfuls of 12mm Source boilies and some liquid worm extract for extra added attraction. I then fished my go-to method over the top which is two open-end feeders fished helicopter style with short three-inch hooklinks and size ten hooks. My chosen hookbaits are heavily glugged 14mm Source Hard Hookbaits. My ground bait mix for the feeders were the Big Fish Marine Halibut and Frenzied Hemp groundbait with some krill oil mixed in for extra attraction also. 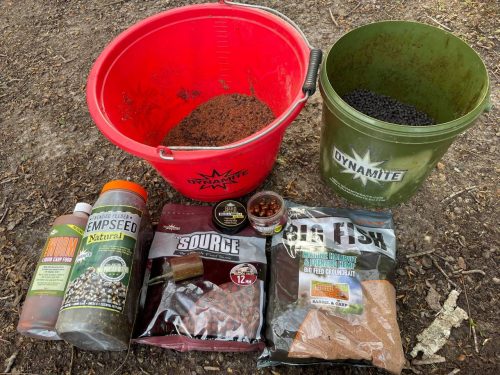 The day was slow on the bite front but on this particular venue that’s usually the case. Dusk is a good time so I knew that I could get lucky. As the sun began to fade the tench began to roll over my baited area and shortly after the liners began. Just as the light completely went my rod signalled its first savage take. As soon as I lifted into the fish I knew it was a good one! I was very grateful to be out playing this tench! After a strong fight it finally graced my net and swung the needle to just over 9lb – an epic start! I then had four more tench between 4lb and 6lb mark, so my first trip back was already a success!

The anxiety and anticipation of first light had me restless and I hardly slept. The first light felt like an age away but it came… and with it came lots of tench including my first weekly Drennan award-winning in the shape of a superb specimen weighing 11lb 4oz. I had a few more mornings targeting the tench where I landed another double-figure fish weighing 10lb exactly, and I landed a near double on the classic lift method fishing two pieces of the new Dynamite Baits Scopex Corn. 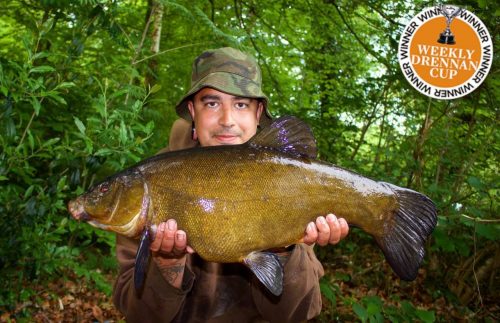 With my tench fishing fix over I then decided to try and locate the elusive roach that resides in my local stretch of the glorious river Itchen. Being local to me, I always walk my dog down the river daily. This helps me keep my eyes on the game. I often bait clear spots with frenzied hemp and caster in the hope that the roach may turn up. It was drawing closer and closer to the grand 16th and on my walks, I started noticing a few good roach on one of the areas that I’d been pre-baiting. I then started to concentrate my feed on that one particular area. More and more roach appeared and some good ones too! Waiting for June the 16th is like waiting for Christmas Day for me! Usually the roach clear off when the 16th finally comes around but this time a few good fish decided to stay! It must have been all that succulent hemp I was putting in.

Due to the severe heat, the river attracted lots of swimmers and boaters, but luckily for me it didn’t seem to put the roach off but it caused issues with trotting a float! Even so, I fed little and often and kept the roach occupied between a group of swimmers and boaters. I then flicked the float out and luckily managed to hook a big roach! Playing a big river roach is scary stuff, especially in gin clear water with swimmers going past. Luck was on my side however and the roach graced my net and spun the needle on the scales to 2lb 12oz. My second weekly Drennan Cup award of the season soon followed… 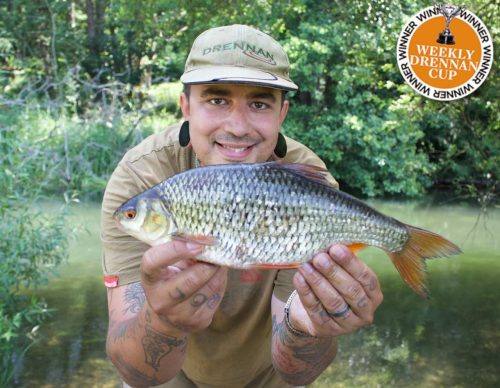 Another one of my favourite summer species to target is crucian carp. It was getting towards the end of July now and the temps were still rather high during the day but I fancied a few morning sessions targeting one of my favourite summer species. I’d heard the lake had been rather busy so on the drive up I tried my best to remain optimistic. Upon arrival, the lake was very busy but one of my favourite areas was free so I dropped my kit into the swim and had a walk to see what other areas were free. The answer was nothing so I stuck to the initial swim I dropped in.

With the temps due to sore, I knew that had to make it count as I wanted to leave around lunchtime when the weather was going to get silly hot. My favourite summer mix to fish over for crucians consists of a whole jar of frenzied hemp, a few handfuls of 6mm halibut pellet, mixed dead maggots, two bags of F1 Sweet groundbait and a serious lashing of hemp oil. Usually I’ll put the whole lot out. As this particular venue has lots of hungry species I want to keep the crucians in my area when they turn up. 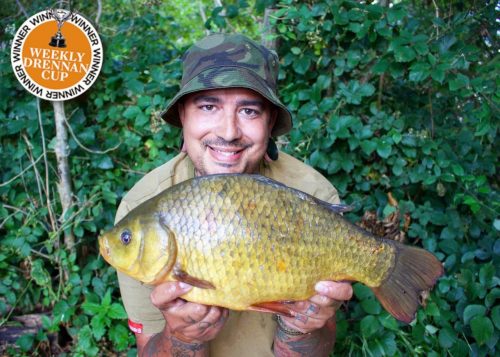 This 4lb 3oz crucian helped Matt to his third Drennan award of the season.

A life long target of mine was to catch a 3lb+ grayling so I decided to start my campaign in November. A friend and I decided to meet up at the river Frome for our first proper go. We arrived at first light and the fishing was slow on the grayling front. We landed lots of trout and my friend was the first to get lucky with a grayling. My luck came towards the end of the morning where I landed five trout then eventually I hooked into a rather large grayling. It was certainly one that I didn’t want to fall off! During the fight we both knew it was a specimen-sized fish! After a few dodgy stabs at the fish with the net, my mate finally landed it for me, phew! The fish agonisingly went 2lb 15oz but an incredible specimen and a fish I was elated to catch!

I returned to the Frome a week later to try my luck again. This time there had been some rain overnight and it doesn’t take much to get the Frome rising! A rising river usually brings colour as well. Not exactly what you want but luckily the Frome also drops quickly. I remained optimistic and I found a run that looked good for a bite or two. It had a lovely-looking snag running alongside it. I began to feed my red maggot that was dusted in Red Krill groundbait. Well, on the first trot down the float buried and I soon landed a beast of a grayling at 3lb 2oz 8dr! The lifelong dream was achieved on just the second outing!  The fish also earned me my fourth weekly Drennan award of the season. I also went on to land grayling weighing 2lb 14oz and 2lb 8oz.

Tackle-wise, I used my trusty Drennan 14ft match pro float rod coupled with a small Shimano reel loaded with 3lb line and an Avon crystal float with a size 16 hook. I then continued fishing the rivers where I landed chub to 7lb 1oz with a back up 6lb chub and bonus barbel to 11lb 8oz. It was at this point that the government tightened the restrictions and introduced another lockdown where fishing was restricted to staying local. 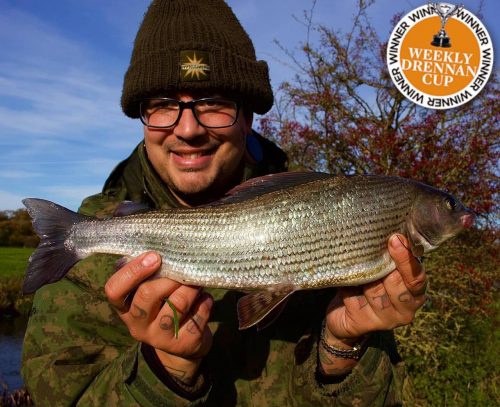 Fortunately for me, I had the Rivers Test and Itchen on my doorstep so my angling was done locally on my favourite rivers. The temps were seriously low now but even in the coldest of temperatures the grayling are always obliging to feed so, I headed out to my local stretch. Big grayling are few and far between so i fished for anything that came along. Like all my fishing I enjoy myself especially on the Itchen as it’s where I grew up and fished.

The first swim I dropped in again I began to feed red maggots dusted in Red Krill ground bait. On the first trot down I hooked into something that felt massive! Straight away I thought it was a trout but when the fish got closer it turned out to be a massive grayling! When netting the fish I couldn’t believe what I was looking at! I knew the Itchen held monsters but they were few and far between but the stars had aligned and I was looking at one in my net. I had to check the scales heaps of times as I just couldn’t believe what I’d caught. A 3lb 3oz river Itchen grayling! Rarer than hens’ teeth! This beauty earned me my fifth and final Drennan weekly award of the season. I tried for an end of season monster perch but I lost more than what I landed so it wasn’t to be. The biggest perch I landed was a 3lb 12oz specimen that was caught on lobworms fished over red maggots. 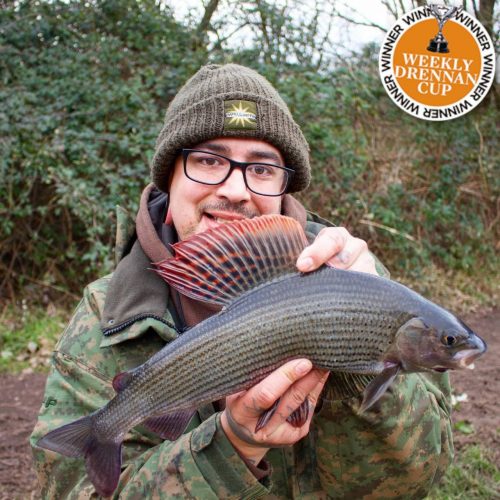 An even better grayling for Matt at 3lb 3oz.

The 2020/21 season finally came to an end and I couldn’t believe the specimen fish that id caught! I was very proud and overwhelmed considering the circumstances. Catching Covid in January and the birth of my third little one in October and all the other obstacles 2020/21 threw at me and I still remained focused. I started getting messages from lots of anglers and friends saying that the prestigious Drennan cup could be mine. Leading the competition with five awards with others on three and two awards I thought it could actually happen. But with Steve Pitts’ monster eels and Simon’s monster roach, I knew they’d attract lots of attention and it’d be close.

I actually predicted I’d come coming fourth so when I received the call from the Times saying I’d come third I was over the moon and very proud of myself. To have achieved what I did with a full-time job and a very busy family home life, needless to say I was overwhelmed. I fish for enjoyment and if I win an award for a fish it’s a bonus. I’ve always followed the Drennan Cup so to see my name in the top four is amazing.

I’m not sure I’ll top a season like the last but I’ll continue to try. Thanks for reading and I hope this inspires others who have limited time to chase their dreams as it only takes a second to potentially get that bite from a dream fish.