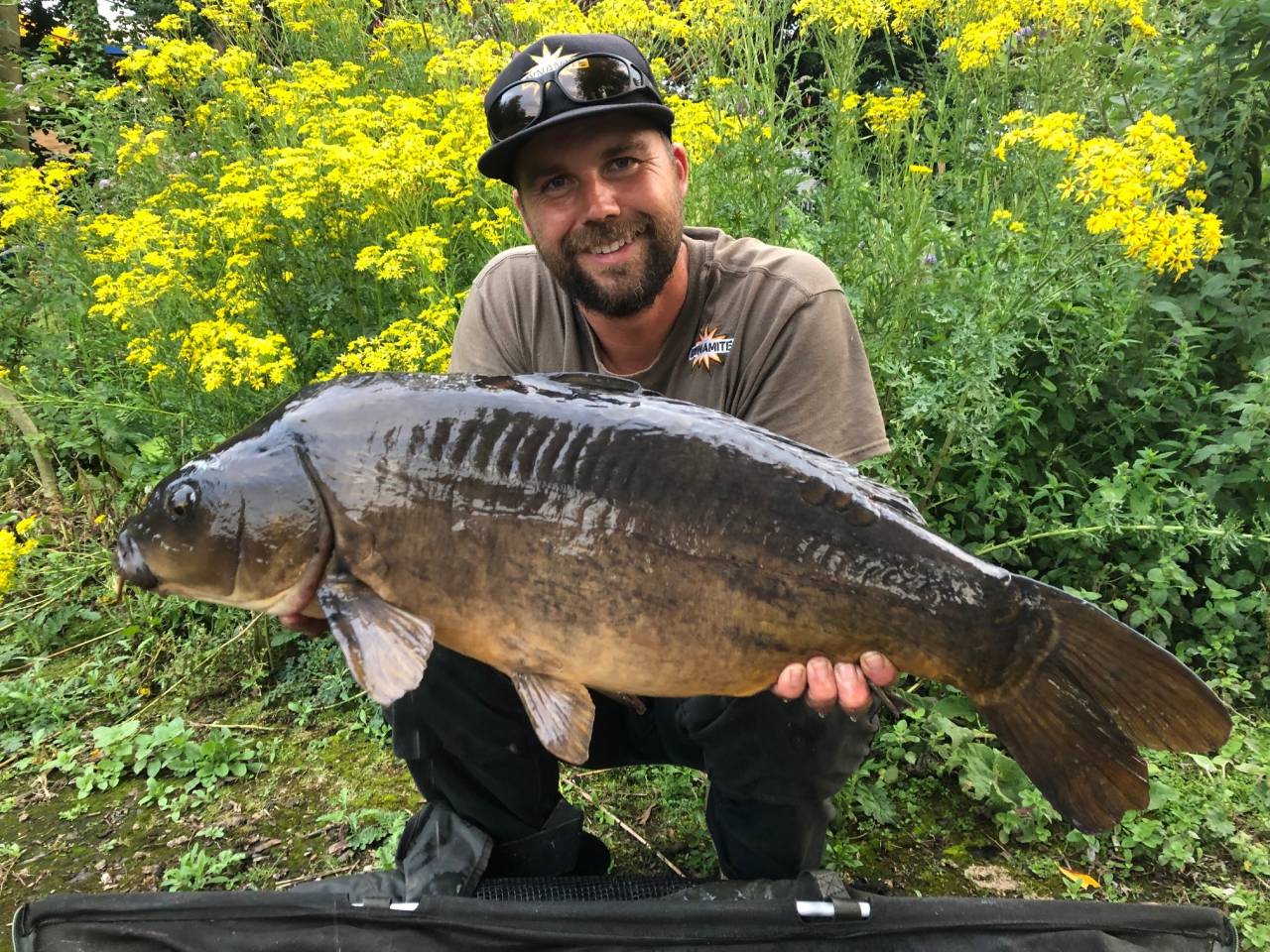 Matt stormed to victory at the Dartford venue with 80lb of carp to qualify for the Grand Final in St Albans in October. He put together a few words about his tactics after the event…

“As I pulled in the gate of the lovely DDAPS Brooklands lake in Dartford, the van was reading 38C on the thermometer, I was hot, sweaty (the air con was not working) and could not wait to get out, and get some air on me, having been stuck in the cab for an hours drive to the fishery.

It was Thursday lunchtime, and the sun had got to me, I had decided I needed to go and have a pre-match visit as my singles qualifier was looming the next day, to say I was excited was an understatement, I could not wait to see the lake, and hopefully spot some of the gnarly old residents that reside in there.”

“I was very surprised as to what greeted me as I arrived. Brooklands is an well established lake, with public access, run on a DDAPS ticket, but also as a day ticket venue, nestled next to a main road, and industrial units, a few minute’s walk from Dartford high street. Mature Willow trees, and a plethora of flora and fauna create a small area of rural paradise in what is a very urban and built up area, and boy did it feel good to escape the clutches of reality for a few hours, and focus on the obsession that is carp fishing for a few hours in another mundane and hot summer work day.”

“I grabbed a bottle of water, cap and polaroid’s and headed off into the 1st swim I could see, and what greeted me instantly was carp…and lots of them, sunning themselves in the weed, just drifting about and enjoying the warmth on their backs.

I wandered further round to get a better viewing angle and seek some shade from the trees, and as I moved further along I could see more and more carp, well over a 100 fish, all milling about in the sun, and weed. This just added to the fire and excitement, and got the grey matter working as to the best approach, and how I was to attack the venue in the 48 hour match.”

“I spent 2 hours wandering the lake, looking in all the likely spots, and with 17 acres to cover, I had run out of water, been reduced to a sweaty, slightly sunburnt mess and decided to head back to work for a few hours, before heading home to prepare for an early departure the next day.” 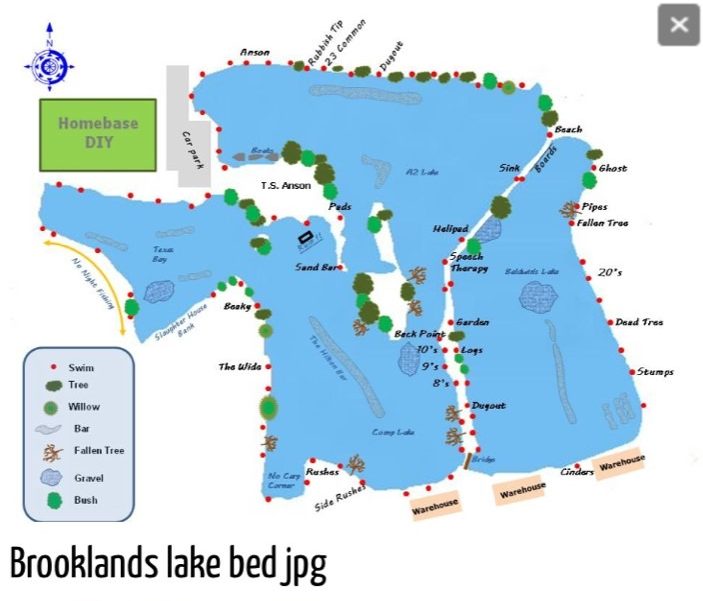 All my gear was squared away, and bait chosen for the match and prepared. I had decided on CompleX-T as my main boilie, and put 5kg through the crusher to produce a crumb. Mainly due to the amount of weed I could see, I wanted something that would sit over the weed, and keep them grubbing about without feeding too much.

I figured it had been a hot week, and knowing what I had seen the previous day, could see they were not really up for a mega munch, so a simple approach of crumbled CompleX-T, Frenzied Hemp, and sweetcorn, with some CompleX-T 8mm pellet was my final choice. All of the crumb was then soaked in liquid krill, and allowed to soak in overnight before being soaked again before the match, adding to the pulling power I hoped. 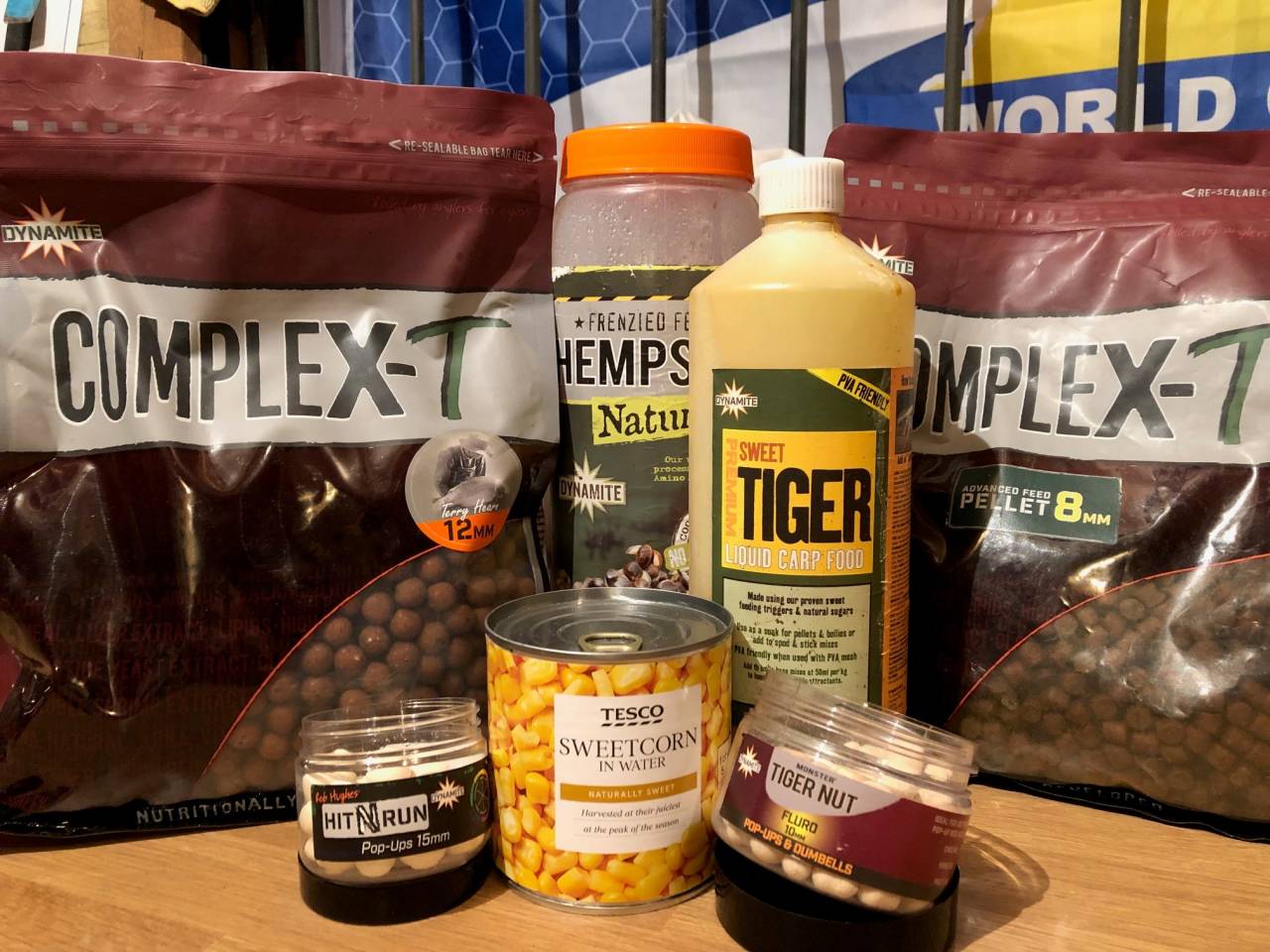 The day had come…

I arrived for gate opening Friday morning, not really having slept the night before, I was excited, and still get that feeling we all do I think, even after 30 years of fishing I still feel the same as the 1st time my dad ever took me fishing, the excitement, anticipation, the challenge, the unknown!

A quick(ish) lap soon revealed where the fish were, still in mostly the same locations as Thursday, which helped my make up my mind on swim choice pretty quickly, I knew where I wanted to be.. hopefully the carp gods would shine on me, and I would get a good draw position as this was a walk off, or watercraft draw!! I did…I came out 2nd and took my 1st choice swim!! What a start….boy was I excited now!! 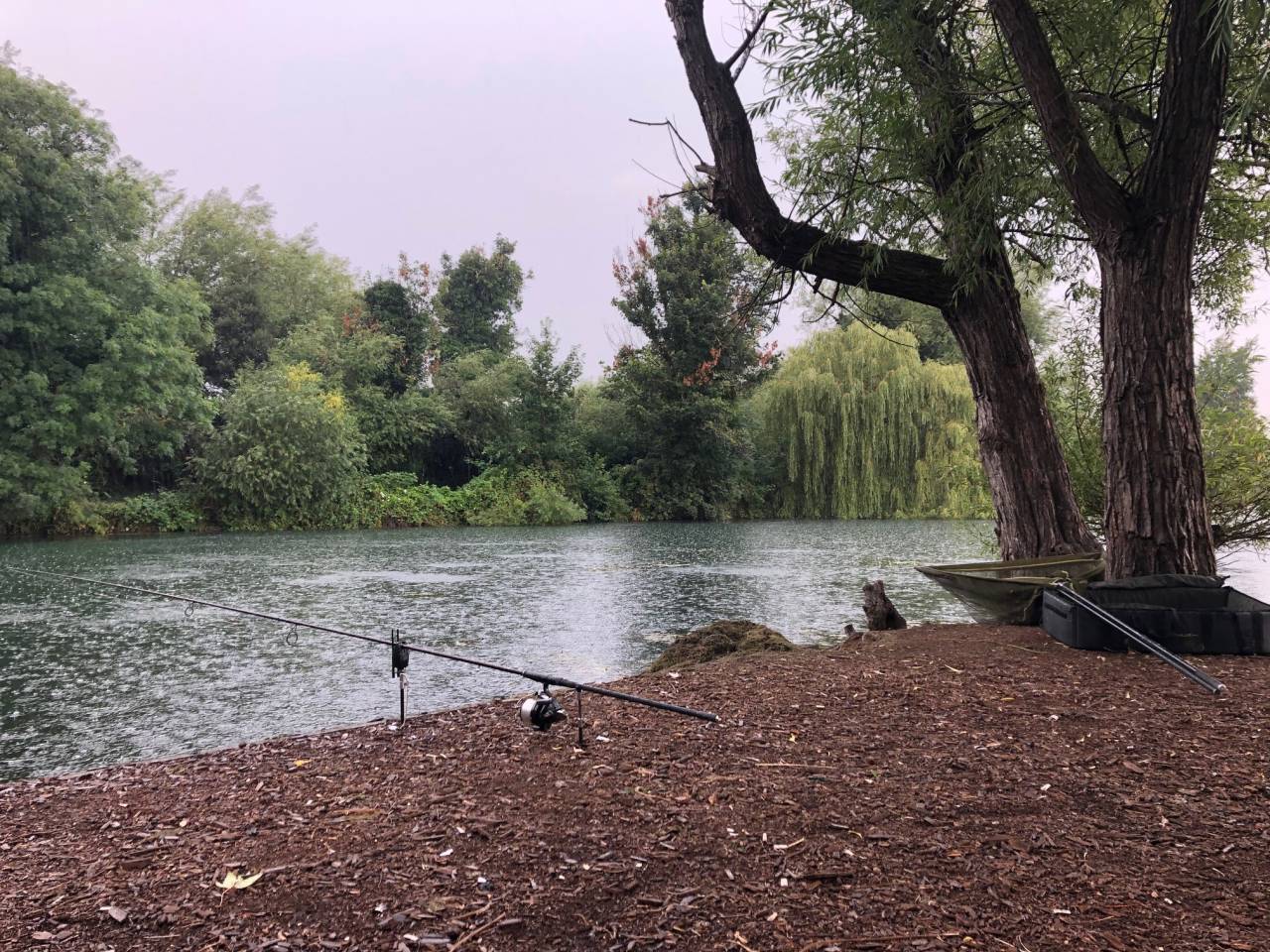 Learning from the past..

I like to think I can learn from my previous experiences within fishing, and my match fishing, and I had taken a huge lesson a few weeks previous, that still hurt, and rang in my head as I was selecting my swim, I shall explain my thoughts, and hopefully this may help some of you in the same situation.

I had previously fished a match on Berners Hall for my doubles qualifier, and I tried to predict what the fish would do…and failed…badly. I had looked at the weather forecast, and based my swim decision on what I could see coming in the next 48 hours…I could clearly see where all the fish were holding, and after coming 1st out the draw bag, decided in my head, the fish would follow the 50mph winds, hence picking a swim on the bottom of the impending wind.

I blanked badly, and the guys in the swim where the fish were showing annihilated it all weekend, remember we are fishing to qualify, yes we like to win, but you need to qualify, it’s the aim of the game here….

So with all this in my mind, I decided my top choice was a small bay, with a large dead snag tree, weedbed and nice inflow stream, with the idea being I knew they were held up there.

I also knew the weather was forecast to drop by 15C, and rain and cloud to come in, and chances are the fish would leave, not all of them but majority, as they headed off to the cooler water spots and other areas of sanctuary, but if I could catch them in the first 16 hours before it cooled, I could secure my place. Well that’s just what happened, for once my plan worked and I received my 1st bite at about 19.30 that evening.

I had been pounding the floaters for several hours, but as on pressured lakes, these fish were sketchy, and they knew the drill, I lost a fish off the top to a hook pull about 4pm, but had found some nice bottom spots, obviously one rod was snag fishing alongside the tree, and I started the first four hours on singles and mesh bags of pellet, hoping for a quick bite. However, it was not until I had spodded 2-3kg out that the bite followed, as it cooled off and they began to make their way out of the snag for the night.

A series of bleeps and a pull up saw me walking quickly back across the swim attached clearly to an angry carp, trying its best to gain sanctuary in the snag tree, but all went to plan perfectly and I soon slipped the net under a 21lb warrior of a mirror. All black and beaten up, a real old looking fish, I was off to a good start, on a good sized fish too.

I could clearly see my white Hit N’ Run pop-up hanging out of the corner of his mouth, and my size 4 carp sprit razor point hook had held firm, right through the fight, and not moved a millimetre, confidence is key in this type of fishing situation, I need to know if I hook something, that I have the best chance of landing it, conversion rates are king in matches, it is better to land everything you hook, than 50% of hook ups due to weed, as I have found out in past experiences.

Bite no.2 came at about 22.30pm, when I was again attached to an angry carp in the dark. I held on tight and firmly played a common into the waiting net, it looked bigger than the 1st fish, but I wanted to get the rod out as quick as I could, so unhooked it in the margin, and went about getting the rod back out.

I swapped over to a white Monster Tiger Nut pop-up dumbell and balanced the combi rig again, and dropped the rig straight back on the spot. A couple of pouches of CompleX-T 12mm were sent over the top to keep the spot fresh, and we set about weighing and recording the common in the net.

I leant over to lift the net out, and it had grown in the 15 minutes it had been resting…quite a lot!! As it went on the scales it bounced the needle to 29lb 7oz, and set me in great position, two fish for 50lb!

As we were taking a couple of pictures my rod beeped again, and as I looked over I saw the bobbin smack the blank, and I was away again, get in!! a quick tussle and a mid-double common sat sulking in the net, yesssss it was on now! A 15lb common bumped me up to 65lb, and into a strong position, I settled back, unable to sleep fully expecting the rod to go off again at any moment, before finally drifting off about 1 am. 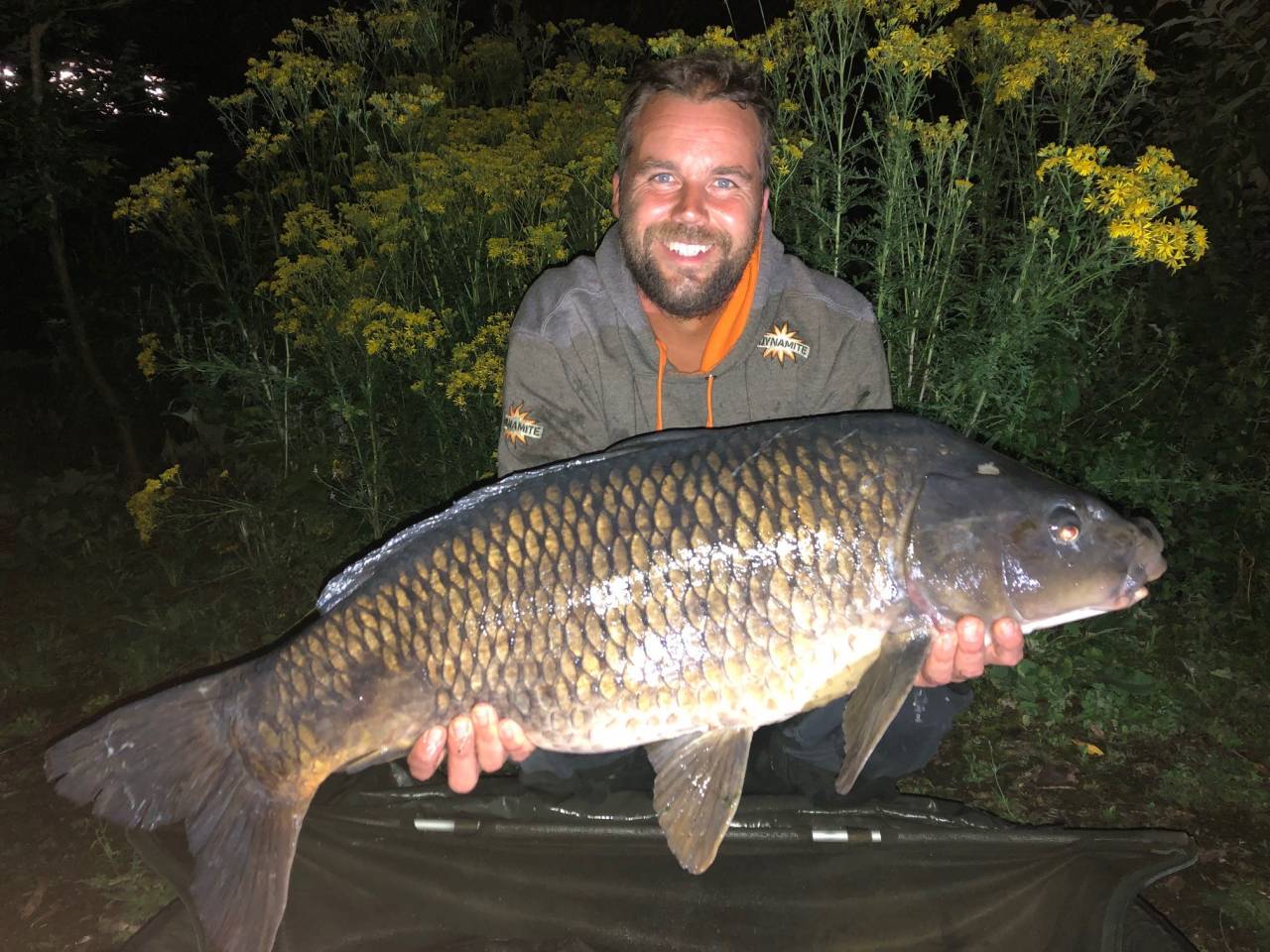 The pitter patter of rain woke me about 4.30am, a quick check of the rods, and small top up of bait on the spots, with a recast saw me back all fresh for a morning bite, that alas never came.

I saw fish in and out of the bay, but the unrelenting rain had clearly sent a lot of the fish on their way to pastures new, I managed a drop back out of the blue about 5pm Saturday  and a 14lb common was banked, taking me to 80lb, with the chasing pack on 37lb, I knew I had probably done enough damage in the first 24hrs to secure a qualifying spot, and I had done just that.

Unfortunately the last night was a fishless affair, with lots and lots of liners on two rods but no bites despite making changes, and positioning of the rods to see if I could tempt a bite at shorter range.

At the whistle, I had done enough to retain 1st and take the win with 80lb, with second place on 62lb! 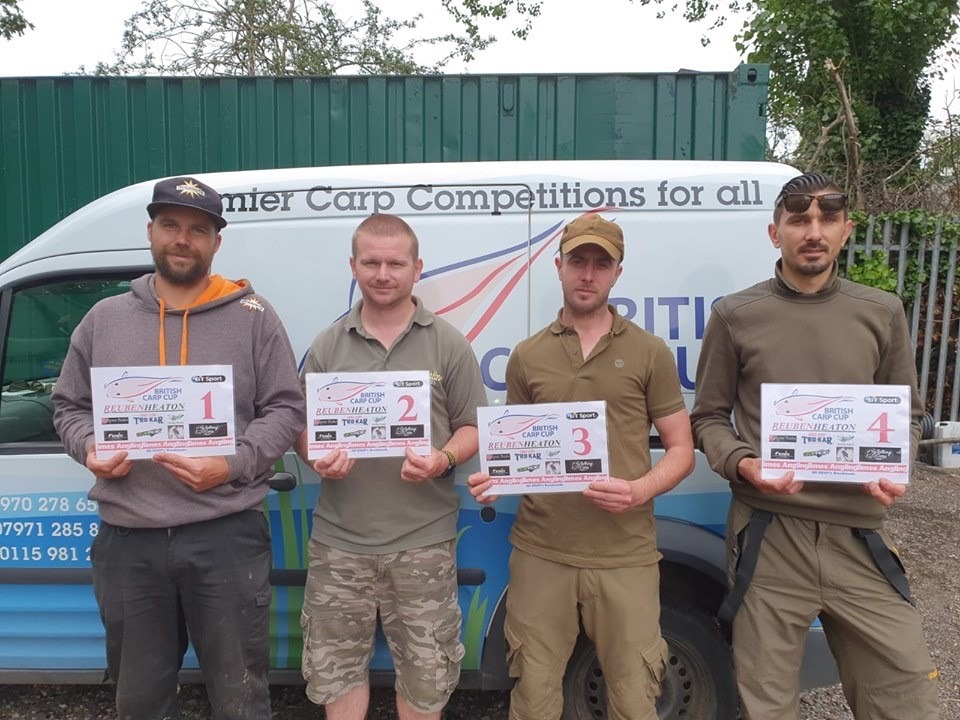 Matt (left) with his winners card..

I was well happy. Moral of the story, go with what you can see, fish are unpredictable, fish for the qualification spot, do the damage early, I think it is better to get on the board, and build a weight, as opposed to chasing a weight and being in the chasing pack, rather than setting the pace.

Anyway, I am off to St Albans willows lake in October for the singles final, this will be a different affair, it is a peg draw and only your three biggest fish count….now that’s a different ball game altogether….until next time be lucky. 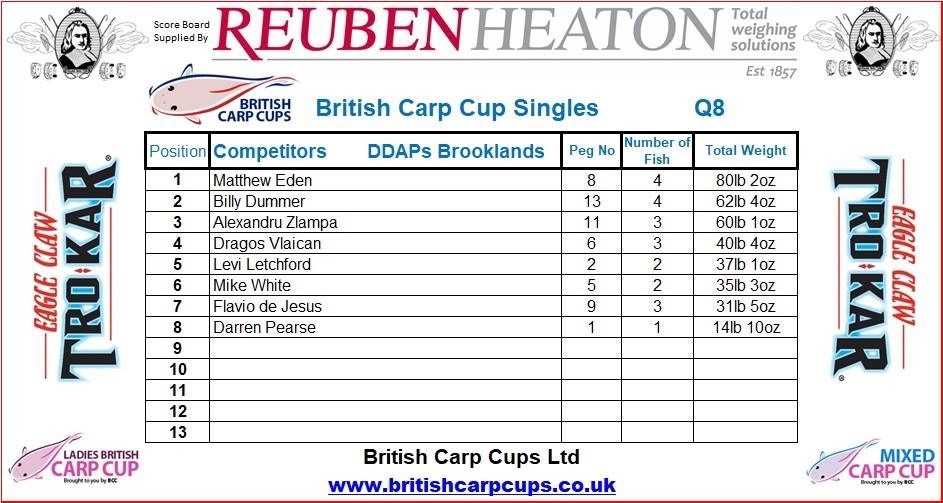