A short tale of friendship and a French carp fishing trip to remember… Andy Bradnock’s first web article is a reflection of just how good carp fishing with mates can be!

There are 3 of us

There are 3 of us. We have been best friends for over 20 years. I am obviously the best looking, Adam has the most dubious dating history of us all and suspiciously dark hair for a man of his age and Andy, well, he is just fatter than the rest of us.

I would genuinely walk through fire and jump in front of a bullet for either of them. In the last year or so Andy has started to work for Dynamite Baits and has really enjoyed his time there. We have always used Dynamite Baits in their various forms so the next bit of this puff piece isn’t just because Andy now works for them. However they have been really good to him and Adam and I want to support him as much as possible. All the crisps and cake the fat bugger eats cost loads so we cannot afford for him to lose his job.

I have never been comfortable in the limelight and certainly have no desire to be known, which is lucky because I usually catch absolutely nothing. However just recently Adam and I have been on a fishing trip in darkest foreign, had a great time and caught a couple using bait from the Dynamite stable. So, here it goes…

We had been glued to the weather forecasts for central France for weeks as our trip at the beginning of November began to loom on the horizon. Our week the year before started off amazingly but the weather went really cold in the middle of the week which pretty well shut the fishing down. This year it looked miles better with the weather holding for the whole week. Apparently the moon phase was terrible but the wise woman of old Kentish town gave us a lucky stick which cancelled out the moon.

What a load of old tosh the moon phase thing is. Please don’t tell anyone I said that though the advocates get all hot under the collar and will start sending me badly worded hate mail!

We started the trip on the overnight Portsmouth ferry that, if you get chance to use, is definitely the best way to start a fishing trip in France. A good night sleep and an early start on the other side of the channel is really relaxing. This trip consisted of Chris, Adam, the Doc and myself and our destination was Moulin du Mee. Andy wasn’t with us as we had already had one trip to France this year and he couldn’t manage both trips.

The trip down was fairly easy. Driving in France compared to the UK is a dream and four hours after leaving Caen we rocked up at our home for the week. Jim the owner has taken his pirate obsession a little too far this year and greeted us with an eye patch on. After our initial concern the conversation soon deteriorated to the lack of parrot on his shoulder and still having both legs. Jim and his son Jimmy who run the lake are two of the nicest people you are ever likely to meet, I would happily spend time with them even if they didn’t own one of the best lakes in France.

We all wish Jim the best with his eyesight as we do love the old goat. I am definitely going to take an inflatable parrot with me next year though.

This year Adam and I had the chateau bank which has shallow margins for quite some distance into the lake. It is also fairly silty in these margins so every run involved a fight into chesties and a strange shuffle stumble through the mire to get to a point where we could land the fish.

We had baits out, bivvys up and tea drunk within a few hours and were settled into the session when before I had even started dinner (marinated lamb loins Greek salad and a flatbread made on the bank) I had a take on a rod I had dropped into an area that had been bubbling away since we arrived.

The bobbin just pulled up tight and the tip bent down, I greeted this occurrence with our usual bellow of ‘beard on’ and the battle commenced. There were no histrionics just a plodding type fight while stood up to our gentlemans areas in cold pond water. I was thankfully more comfortable than Adam as he had successfully managed to confirm that his chesties did indeed have more than the one required hole in them.

A bit of grunting and shuffling and eventually a 36.14 mirror was getting its photo taken. 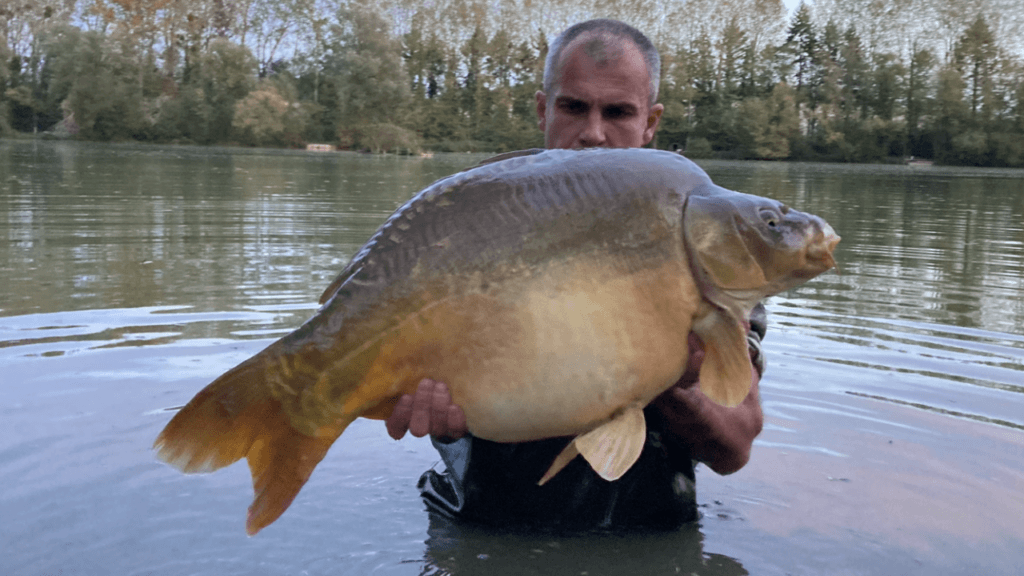 This mega 36lb 14oz mirror was a brilliant start!

I had a further take overnight which resulted in a tiny common of just a few pounds that had spawned in the lake. This put our bank into a slender lead and as we are stupidly competitive when fishing with Chris and the Doc this meant everything and we happily scoffed a big full English breakfast gloating at the far bank proclaiming the superiority of our angling prowess.

Sadly this was the last day that we could do this as they went on to give us a right royal spanking. After breakfast I set about knocking up a bucket of bait for the day. This involved crushed, whole and halved boilies mixed in with half a jar of Dynamites Mixed Particles a couple of kilos of the Swim Stim Betaine Green pellets and the real game changer a bottle of Dynamites new Shrimp Extract. This stuff is amazing it seems to add a completely different dimension to the attractiveness of a baited patch, I think it contributed to the bubbling that we experienced over our baited areas all week. 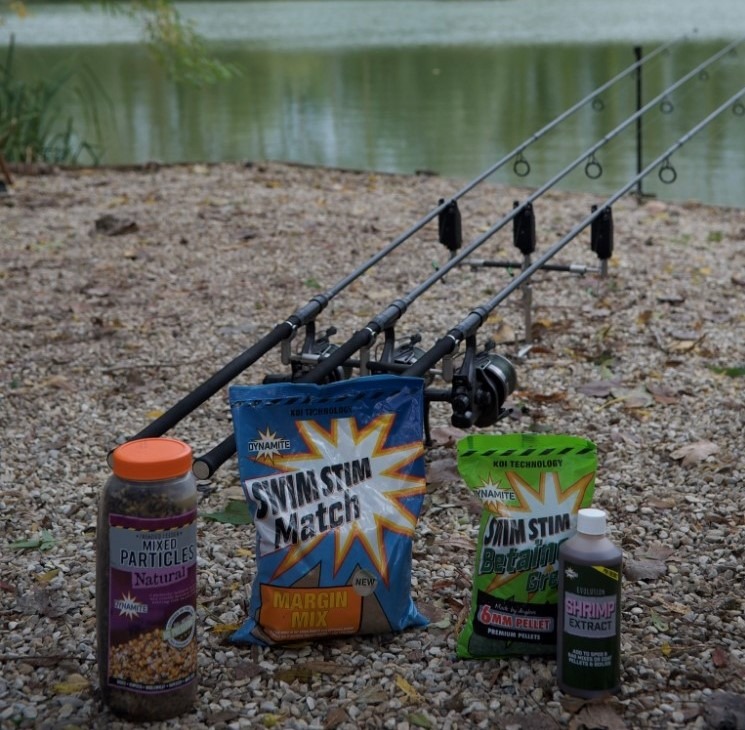 To bind all this together I was using Dynamites Swim Stim Match Margin Mix groundbait. If you aren’t a great user of groundbaits you are really missing out, they add particles through the water column and produce lots of attraction without providing much food. I have been using various groundbaits for years but this latest one from Dynamite is proving to be very effective.

By lunch time I had all three rods baited with my smelly concoction and I watched as patches of bubbles started to erupt over my middle rod. This rod was only in 3ft of water and the activity got more and more intense as the afternoon wore on.

By 14.00 I was pacing the bank unsure why I hadn’t had a take as fish were obviously trying to remodel the lake bed in my swim. Then suddenly there was a huge explosion as the water over my middle rod ‘dropped’. My eyes turned straight to the rods and just as I was thinking I had been well and truly tucked up by this fish the middle rod pulled up tight.

The yell of ‘beard on’ was such a relief after an hour or so of being on tender hooks, wearing a trench in the bank behind the rods as I paced. As we waded, sloshed and stumbled out into the lake the Eurasian cranes that migrate through France at this time of year arrived overhead, their distinctive calls are amazing and added to the experience of playing a big French carp.

After a few minutes of to and fro, I said to Adam who was stood at my left with the net that I didn’t think it was small. At this it decided to go on a long ponderous run down towards the dam. This did nothing for my frayed nerves but gradually I drew it back towards my potato headed netsman.

When it went into the net we just giggled. It was enormous about 8ft across the shoulders and its belly was bottoming out in the silt. Sadly it had another rig stuck in its flank with the swivel hanging out of its mouth and line trapped through its gill rakers.

We managed to get it all sorted and Jim commented that I was probably the best person to catch the fish and sort it out (I am a veterinary surgeon) but it still did bleed a fair amount. The weighing and photos were therefore kept really short it weighed somewhere just north of 67lb and the in water shots were rushed a bit but came out ok. 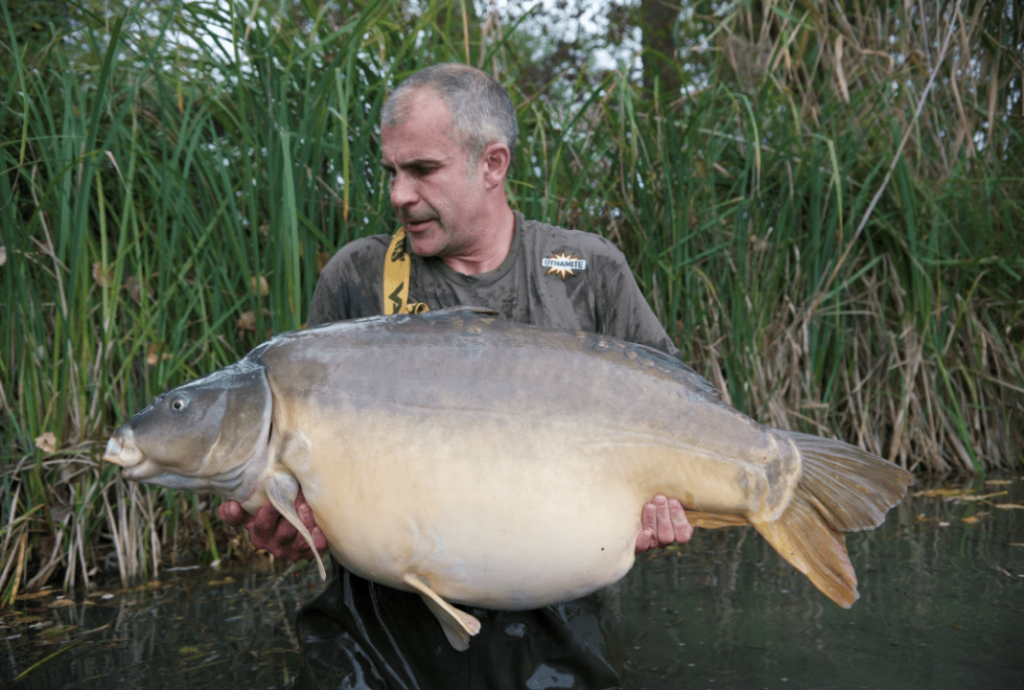 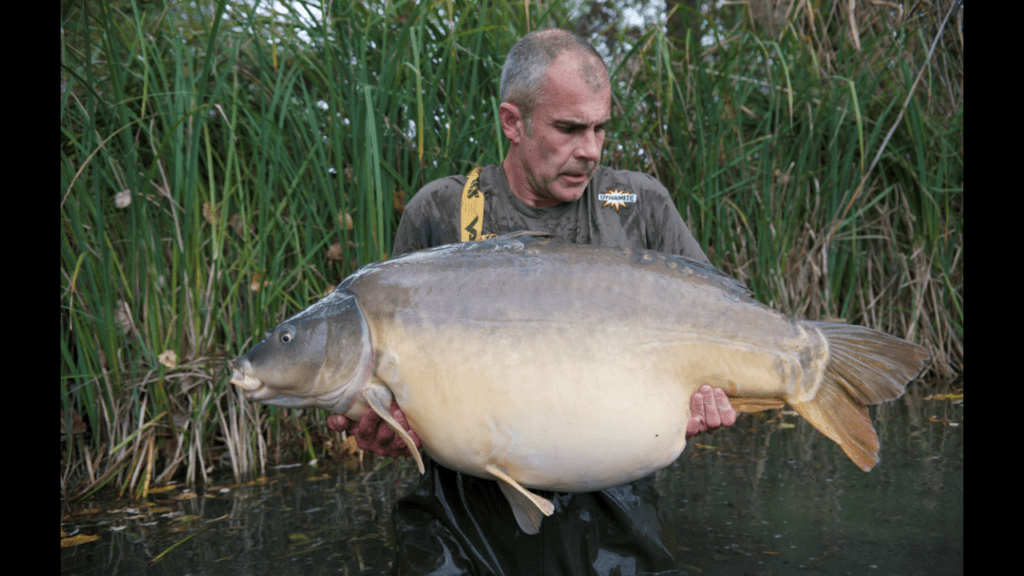 So we were beating the other bank I had caught a monster and it was only Sunday. To top it off it was fajitas for dinner (adam calls it tea but his grasp of English is scanty at best). What would the rest of the week hold…