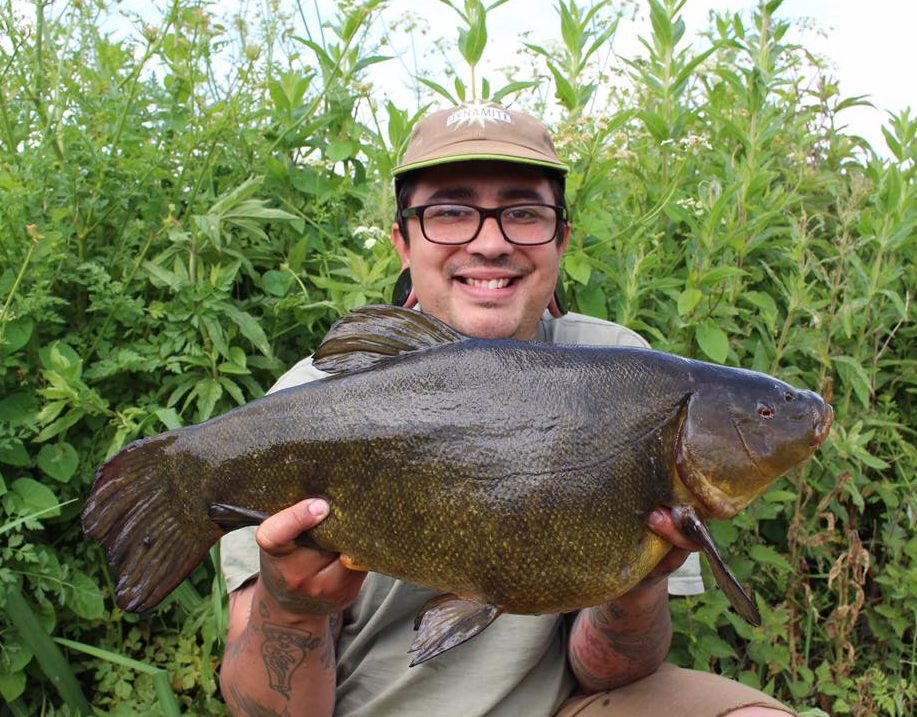 Matt is no stranger to catching big tench

My go to tench top tip “if” there isn’t eels in the venue your fishing is to use worms and lots of them. Tench love worms! Especially big tench. I like to fish open end ground bait feeders fished helicopter style. This way if there’s weed or soft silt you can adjust the distance between the hook link and the feeder.

Don’t ever ignore weed try and fish as close to it as possible as tench love it! I opt to use a short 4” stiff flouro carbon hooklink with a size ten Kurv shank pattern hook, I simply chop the lob worm up into three pieces then thread them onto the hair and cap it off with a plastic caster to stop the worm from falling off.

My ground bait mix for the feeder consists of chopped worm, red krill ground bait, red maggot and a healthy amount of XL Liquid Worm extract. I like to fish this method over a big bed of Frenzied hemp, red maggot, chopped worm and SwimStim Red Krill groundbait, basically the same mix in the feeder. I apply the free offerings by spod.

TIP: Don’t always fish a feature out right because it’s there; instead let the tench tell you where there feeding by spotting bubbles etc. Location is always important unless you’ve got a spot going. But often my times limited so I’ll arrive at the venue before first light, look for signs of tench then apply the free offerings then the feeders.

A lot of tench angler’s like to recast regularly but when using ground bait feeders I like to leave them out especially when using worm, unless you’ve been pestered by smaller fish then re-cast but often the rod will churn off when the tench are there. This particular tactic has landed me lots of tench over the 8lb mark to 10lb+ 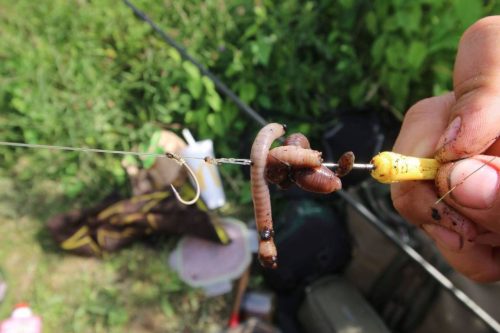 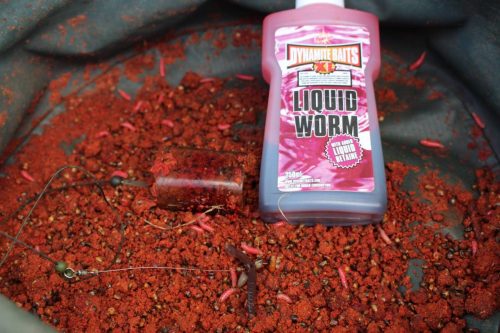 Matt Likes to boost his feeders with XL Liquid Worm

My second go to tactic for big tench is the sweetcorn approach. Early spring the tench haven’t ventured into the margins yet, so you’ll need to fish a little further out. For my corn approach when fishing further out again is to use either maggot feeders or open end feeders.

When using two or more rods I’ll use one of each to mix it up. Again I’ll fish these helicopter style. I’ll use a 4” supple coated hook link with a size ten Kurv Shank hook simple knotless knot style rig, with one single buoyant plastic piece of corn for the hook bait, I like to soak my plastics in the XL Tutti Fruity Liquid to give them extra added attraction!

I often tie a rig ring after the corn so if there isn’t eels present I’ll thread on a few red maggots for extra added attraction. When using the maggot feeder I simply fill it with red maggot and add some XL liquid. Instant attraction!

For the ground bait feeder I use  the Green Lipped Mussel Method Mix and add corn, hemp, and more tutti liquid liquid. I fish these rods over a big bed of hemp and corn which I feed via a spod. When using the maggot feeder I like to recast but I like to leave the ground bait feeder out off of the spot to hopefully catch the bigger tench which may feed off of the baited area. I’ve had heaps of tench on this method to 9lb plus. 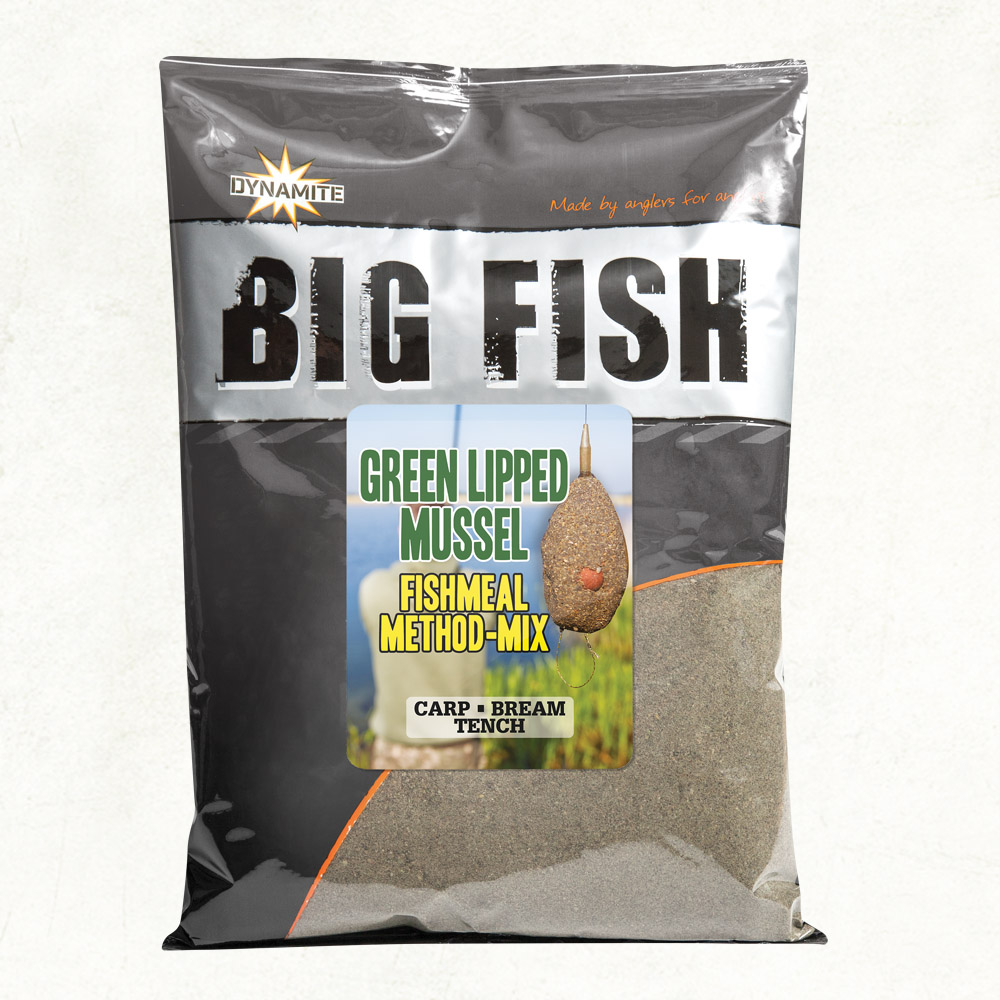 Once the weather has warmed right up and most lakes have come to life in the form of marginal features like pads etc there’s no greater method than float fishing for tench! Although the lift method is a epic method I opt to fish a scaled down approach. I like to use a light pole float and fish under the rod tip close to some pads.

I simply use a small/light pole float and a size 14 hook, hook bait choice is down to personal preference but often smaller species are very active now so I either use a 8mm Marine Halibut pellet I attach this with a bait band.

Another quality hookbait is double corn! And casters are another favorite either of them three hook baits will bag you tench! The night before a float fishing session I’ll often rake the swim and bait heavily with Frenzied hemp and the choice of hook bait I’ll be using. Or mixing this all into Green Lipped Mussel Method Mix then balling it into the swim also works. This will allow the tench to move in overnight and get grubbing about gaining there confidence for your return in the morning.

I’ll also plumb the dept on the float so all you have to do is turn up attach your chosen hook bait and fish! There’s nothing better than sitting back and watching tiny pin prick bubbles start to appear around the float knowing that any minute it could disappear! When fishing scaled down the bites are savage and the hook holds are always epic!  I’ve lost count on the amount of big tench I’ve landed on this method! 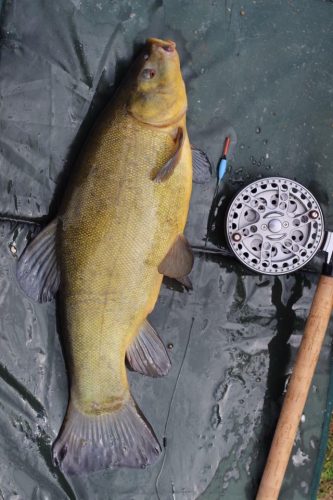 Matt Likes to float fish for tench later in the spring

Boilies play a big part in today’s modern day tench angling. Tench have got big from feeding on the ever popular carp angling and angler’s bait! So boilies should never ever be ignored. The amount of times I’ve blanked when being stubborn when using more traditional baits and carp anglers have caught several tench and some serious sized tench at that! When using the boilie approach I like to use Method feeders.

Using a Method feeder is a deadly approach! I like to use a 2oz flat bed Inline method feeder and a short 4” supple hook link with a size 8 Kurv shank. My Method mix needs to be sticky so again I use the Green Lipped Mussel Method Mix and add chopped, Terry Hearn’s The Source boilies and some Marine Halibut 4mm pellets. And I add plenty of Source liquid for extra added attraction!

For my hook bait I’ll use a source 12mm hardened dumbbell hook bait! A deadly proven big tench catcher. I’ll fish my Method feeders over whole and chopped Source boilies I don’t like to put out a lot of free offerings when using method feeders. But I apply the free offerings again with a spod. This method works well for me especially on busy day-ticket carp waters where a lot of boilies are used and have loads of big tench on this method also. 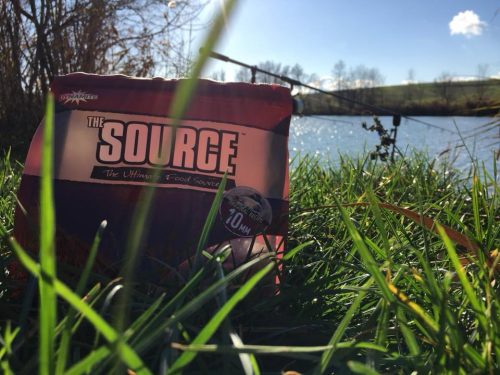 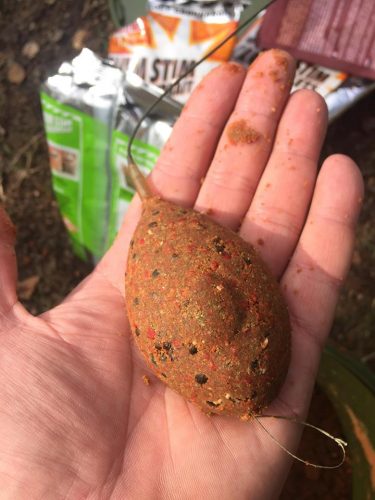 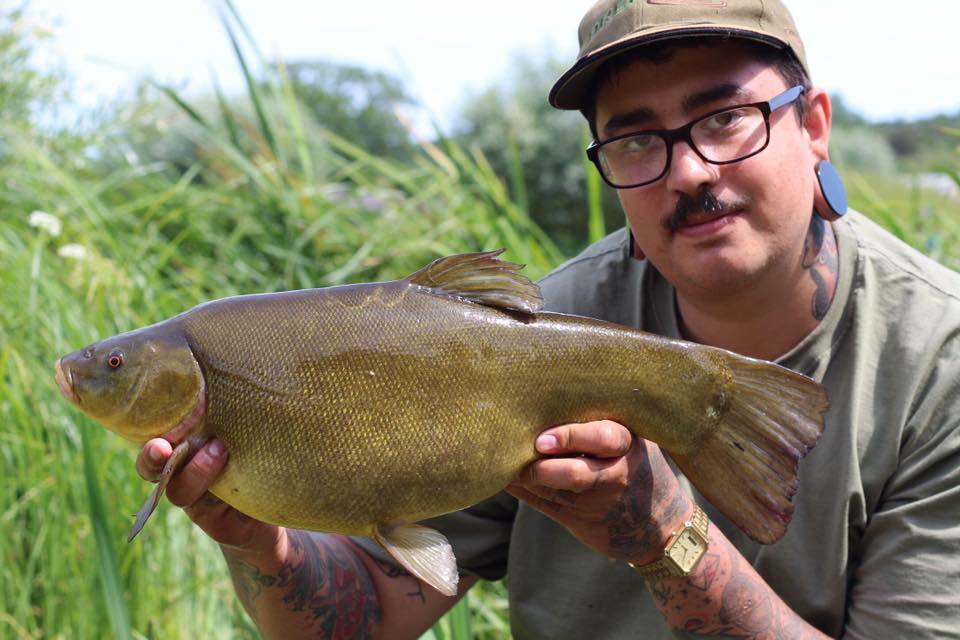 Another clonker of a tench caught on the Source