Early to mid-spring can bring about some difficult decisions when it comes to tactics and feeding. Alex Dockerty is here to help you get it right.. 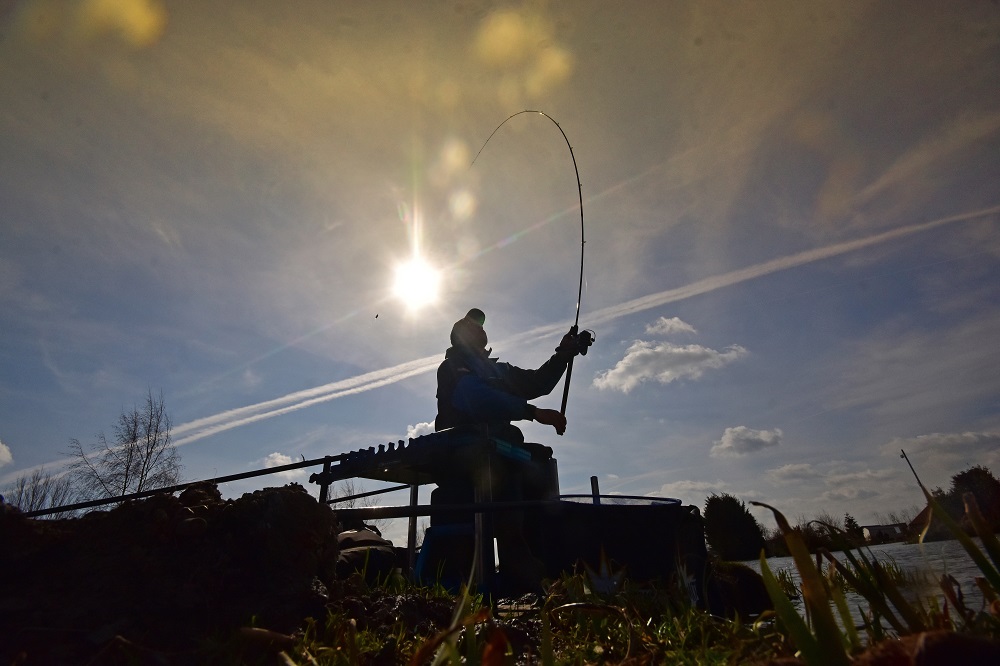 I consider early-mid spring to be a bit of a cross over period in match fishing. Everything is either on the cusp or in the middle of changing between the days of fishing shallow and bomb fishing, looking for a bite at a time!

When the clocks go forward and the days start to get longer the fish start to slowly wake up from their long winter exile, you can start to think about feeding a little bit more, but don’t go mad yet as you’ll kill things before they have had a chance to get started.

The main change for me at this time of year is being more selective regards my bait choices and tactics. The feeder fishing for example has gone from bomb and corn or bread to the use of a small feeder casting closer and closer to the islands as the days move on. Here I’m now looking to build the swim rather than simply ‘grab a bite or two’.

For me, I look to use either a small Method feeder or ideally a Banjo feeder. The buzz word here though is small. Don’t try filling the swim in, just because you get the odd quick bite. I like to slowly build the swim over two or three hours. 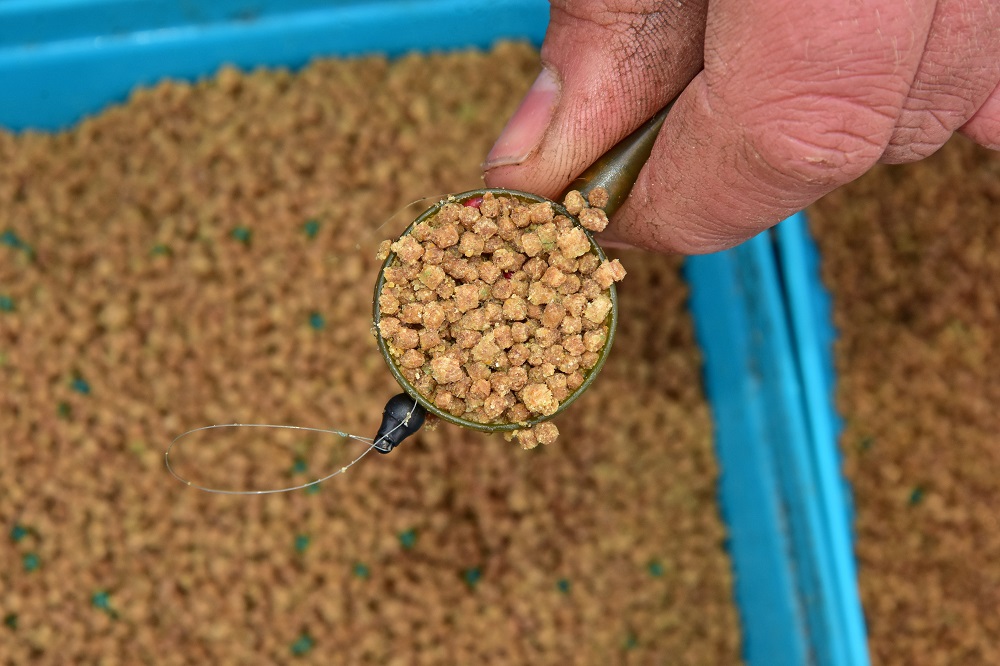 For the second line, I will look on the long pole. This again gives you options to search the peg, but you are still fishing quite meagerly as the fish might still be reluctant to come to you and your feed due to the coldness of the water.

Over the course of a five-hour match the chain of events for me would be to probably kick off the pole line with a little loosefeed. I would prime just the one at the start so the fish that are prepared to feed have minimal options of where to settle. I you do feed two at the start, you can end up splitting the fish. 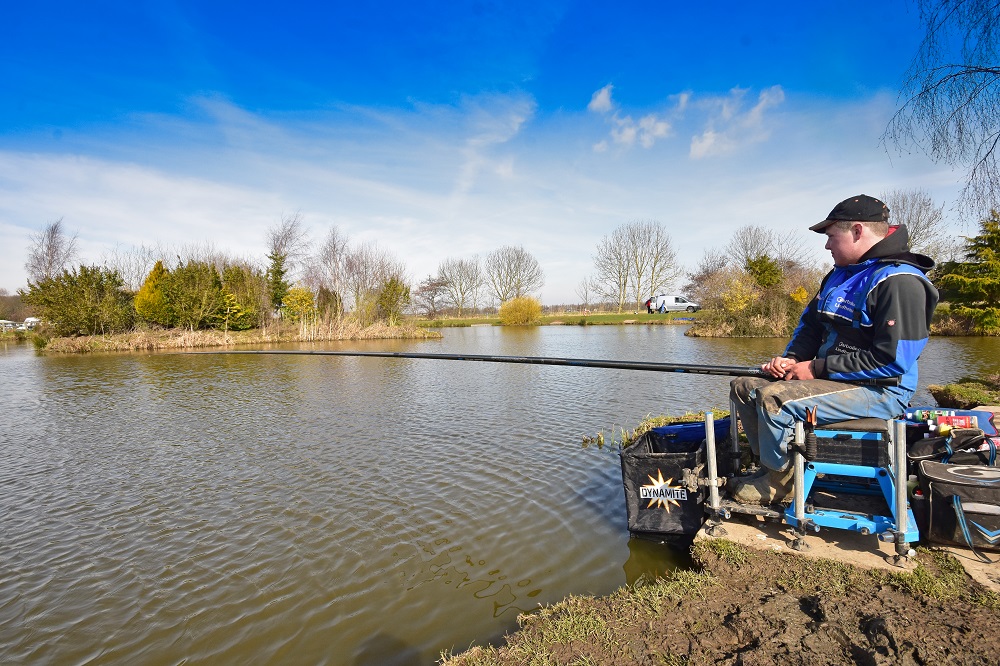 Bait-wise, I will be starting to move onto hard pellets rather than the soft expanders that I have been using mostly over the winter months. I find hard pellets are a bit more selective and tend to pick out a better stamp of fish too – in the shape of bigger f1s and carp rather than better-sized skimmers and other silverfish.

After this is all primed and ready, it is onto the feeder line… 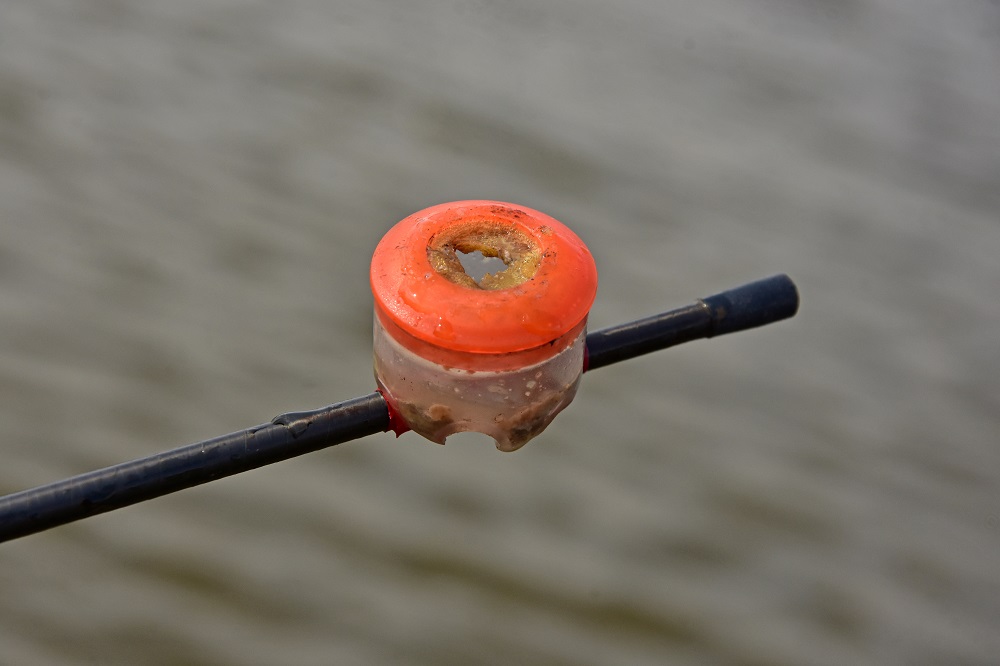 Islands in the pool

If there is an island in your swim, this is always a great starting point for the session. Now though, I will look to cast close up, rather than three-feet off as I would have been doing a few weeks previous, into the deeper water.

The fish at this time of year will be more willing to feed in the shallower water margins as they will be the first parts of the pool to warm in the now strengthening spring sun. But, I will only go really tight if I have two-feet or so, I still think it is too cold to be targeting the mud line just yet.

The water is still cool although warming slowly – so the fish still like a bit of depth over their heads to feed with confidence. If you do go up on the mud line, you might catch the odd fish, but experience has shown me that they will be quite skittish still and not overly comfortable to settle there yet. 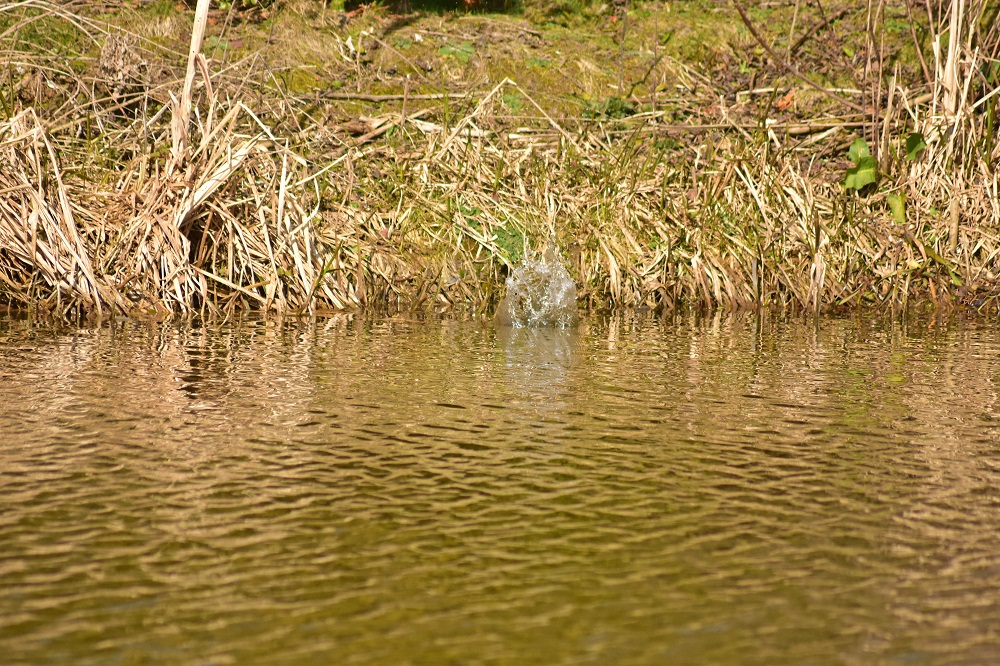 To catch fish steadily, you need them to be comfortable and confident. We’re still in that halfway house stage at the moment. Tackle wise, I would be using a nine-foot feeder rod as it is only a delicate 25-yard cast to the island, combined with a nice soft tip so every bite shows up and so you’re not risking moving the feeder once it has hit the bottom. Plus, I find I get better liners with a softer tip, which helps give the fish’s presence away.

Conversely, I like to use a 30g small Banjo feeder. This is so that once it lands on the slope, there is less chance of it moving. Plus, with the Banjo feeder you don’t always have to fully load it of you want to feed a little less on a cast or two.

Banjo feeders carry much less loosefeed micro pellets compared to Method feeders – around 50 to 200 or so? Although you are feeding more bait than a few weeks ago, I still like to scale down fishing for one fish at a time. Listen to what the fish and the bites are telling you. Don’t be in too much of a rush to heave bait in, just because the sun is out.

You can always cast more often, so you don’t run the risk of over feeding as easily. That’s why I like Banjo feeders. You have more loading options with them than you do with other feeders.

Set-up wise, it is the same as the Method – free-running with a four-inch hooklink and a bait spike attached so i can fish one of the new Dynamite Baits’ Durable Hookers. I like to mix up the colours of my hookbaits early season as the fish are still on the torpid side so I think they are more attracted to the colour than by the flavour at the moment. That will all change once the water starts to colour up and they are feeding more by smell than colour.

For me, the White Amino’s stand out well over a bed of Lindholme Fishery pellets. Regards the size though – 4mm or 6mm – there are no hard and fast rules. I tend to go by the average stamp of fish in the pool to decide whether to use the smaller or larger ones. 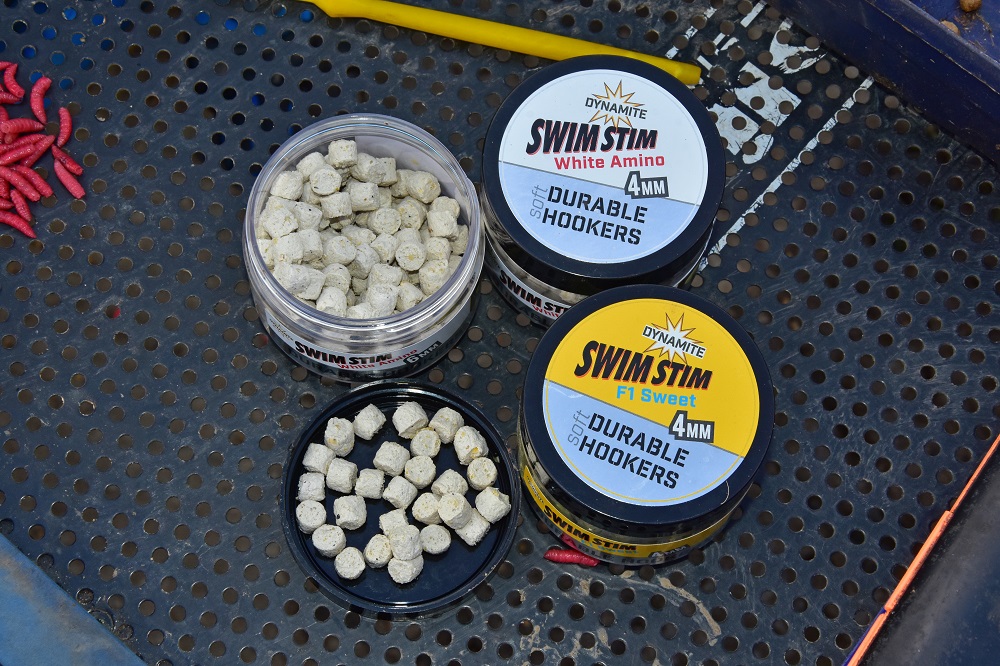 Alex is a big fan of Dynamite’s new Durable Hookers

To get an extra edge, especially at places like here – Lindholme Lakes – where it is Fishery-only pellets, the use of one of Dynamite’s new Swim Stim Pellet Soaks can really boost your weight. By using a flavoured Pellet Soak you can change the colour and taste of the feed pellets so that your offerings standout form those other anglers around you.

During the winter i was using a lot of the F1 Soak, but these days i am starting to use more of the Amino Original. This doesn’t colour the pellets, more it gives them a super boost of flavour. Plus, as the fish are feeding by sight still, i think having too many colours in the swim can work against you at times. A hi-viz hooker pellet over the top of a pile of natural-coloured pellets is enough to stand out but not scare. 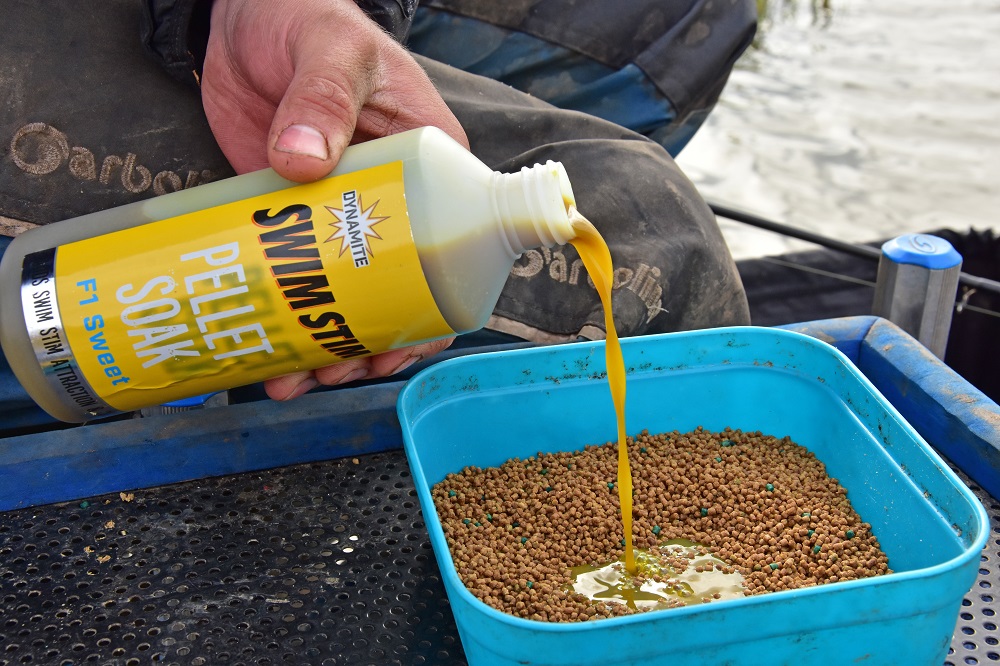 The pellet soak also helps bind the pellets to so they stay prefect for longer without the risk of drying out over the course of the match.

Regards the fishing, I will look to cast every eight to 10 minutes and see if a bite-time pattern arises. I will fish the feeder for the first couple of hours possibly or until the bites dry up before looking on the pole line, which I have continued to lose feed on. 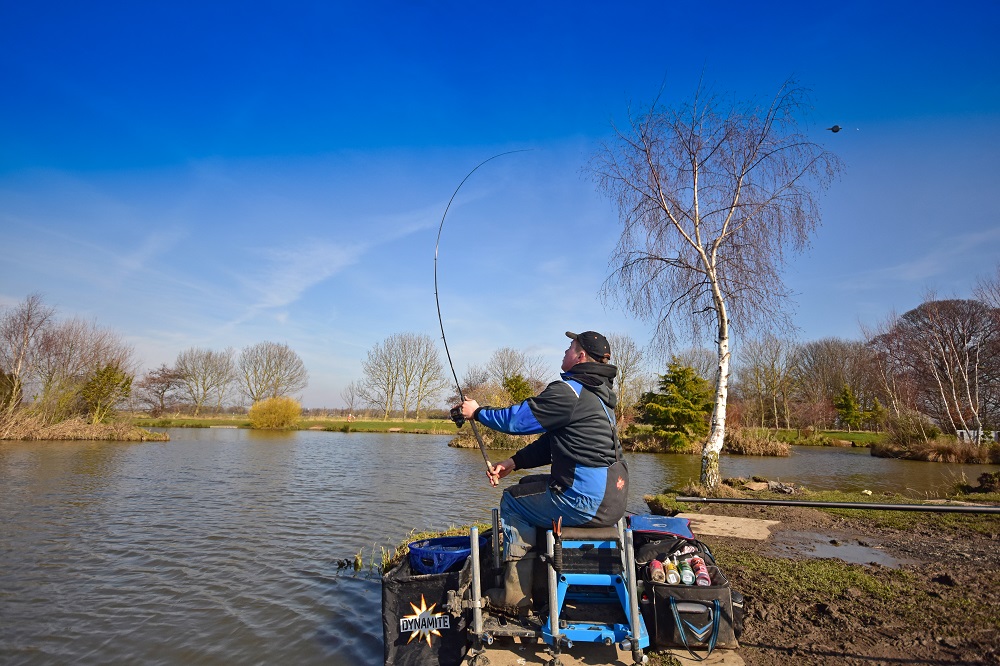 On the pole line 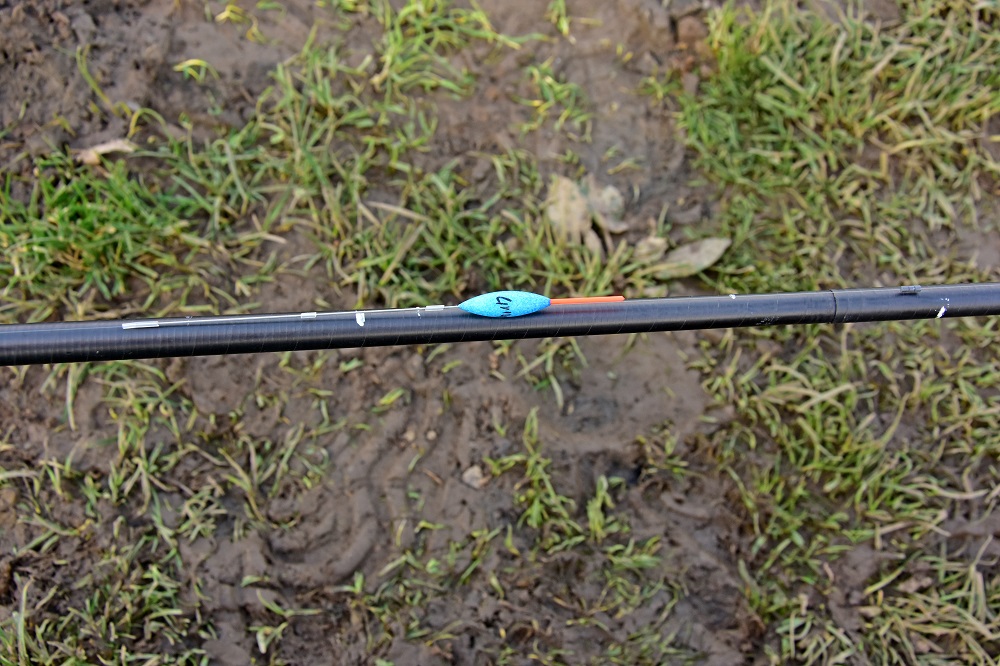 As the fish aren’t really taking on the drop yet, I’m looking to catch mostly hard on the deck. I therefore plumb up so the pellet hookbait is just to say touching the bottom. If the day is hard, i will look to feed micro pellets and then fish a 4mm Durable over the top.

For the loosefeed, I will continue to feed around half-a-dozen pellets every five to seven minutes. Too many anglers feed 20 or more a cast and this can either lead to too many fish in the swim or it will see them backing off. By building the pole line slowly, just like the feeder line, you keep your peg management. However, never catch the last fish in the swim. Always leave a fish or two before you move back over to the feeder. If you fish the pole line to death, it will be very hard in the course of the match to bring it back to life again.

Everything early to mid-season is a bit on a knife edge. Go at it too hard and quickly and you will end up ruining your chances, but by doing things a little more slowly and in a more controlled fashion it should see you having 30lb to 60lb most days. 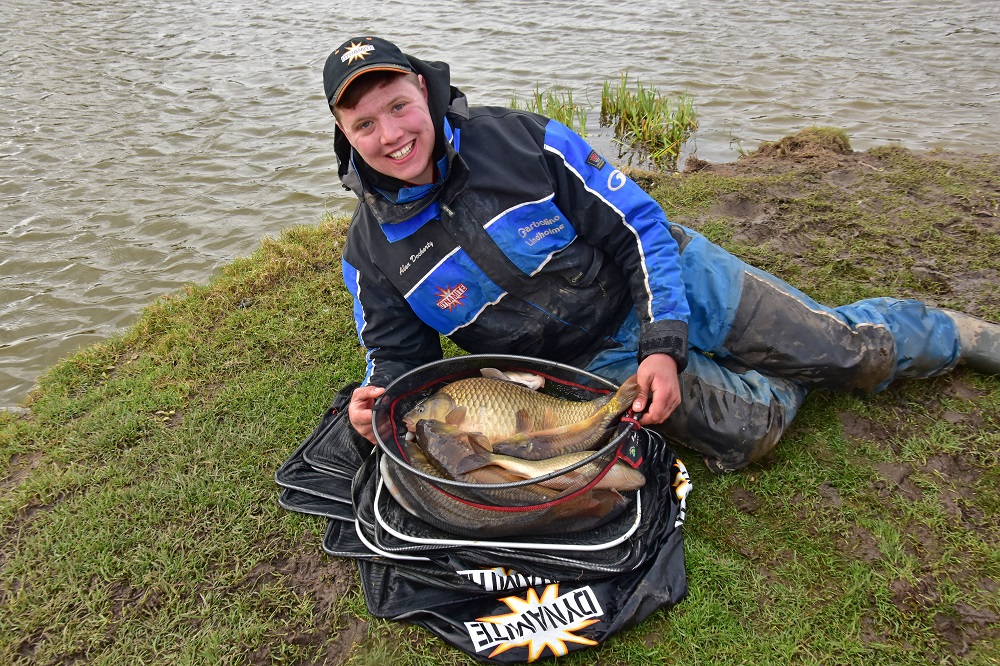 The softly softly approach pays off well in early spring