How to catch big river perch 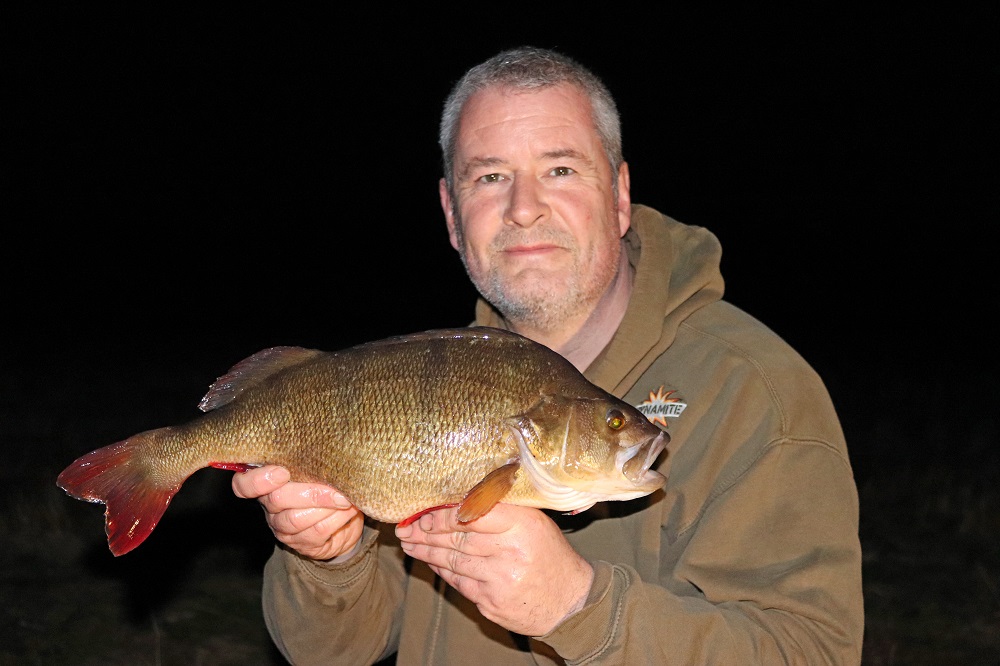 It was the Saturday at the Northern Angling Show when Mark Parker (Dynamite’s media man) came up and said, “Still okay for Monday then?” Ah…yes…with all the excitement of doing the first show in the UK with the rest of the Carp Spirit UK team, the fact that Mark Parker and I were due to meet up on the river somewhere and produce an ‘on the bank’ late-season photo feature had completely slipped my mind!

Fortunately, I’d enjoyed some great success on the river, with a stack of big perch and chub, just days before. Therefore, a return visit to the same area, with Mark working his magic behind the camera and myself wafting a rod around, a few nice fish and a lovely little feature should be a ‘cinch’… or so I thought… 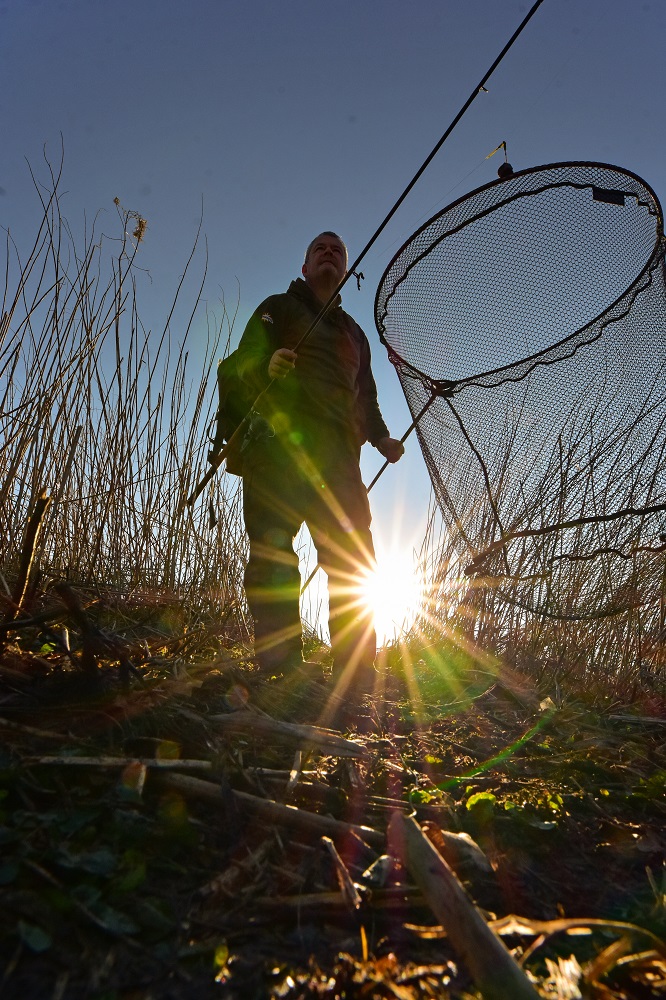 Perch fishing on the river towards the end of the season usually means that the best chance of action is the very last hour of daylight, with the perch using their excellent eyesight to their best advantage to hunt their prey in the weaker light conditions. Thankfully for me, this meant that after the busy weekend, I could have a lay in, get some essential chores completed at home and still meet Mark at the river in plenty of time to get enough tackle and bait photos done before settling down to the fishing itself.

The tackle was really quite simple, with a quivertip rod, kitted out with a soft 2oz glass tip, an Enterprise ‘snag safe’ running lead clip that allows a quick change of lead or feeder, with a soft rubber bead between the lead clip to help protect the knot for the hook link swivel tied to the end of the mainline. I’m favouring the lighter, coated braid type hooklinks more and more for this type of fishing, as they provide both strength and reliability, with a relatively subtle presentation. 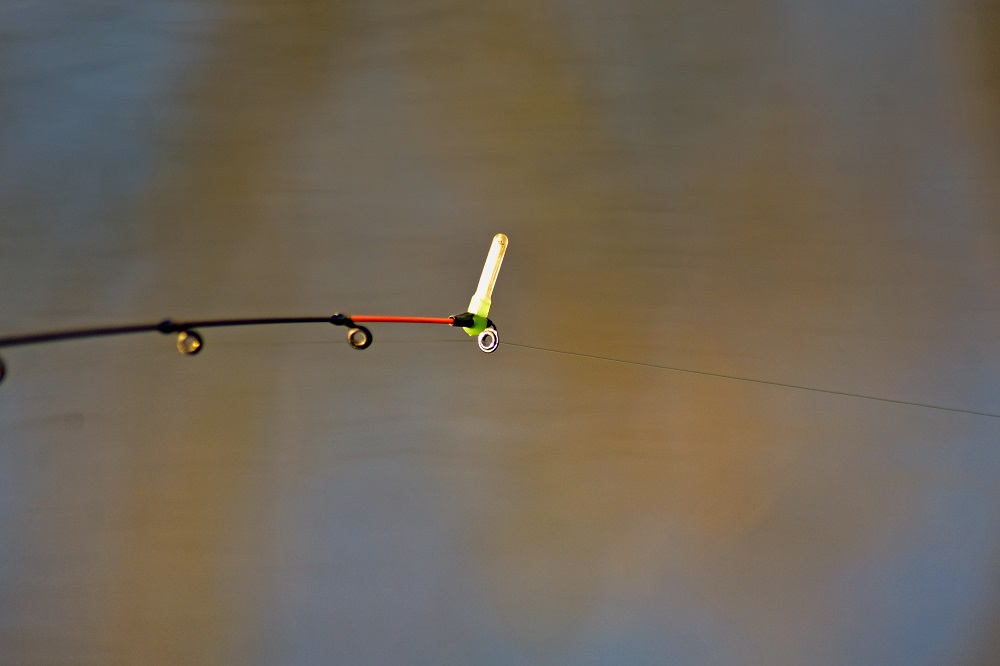 I strip the coating off the end of the hooklink with the hook on, but leave the coating on for the rest and tie a ‘figure-of-eight’ loop so that it’s a simple loop-to-loop join to the swivel and the hooklink can be changed quickly without breaking down the rest of the tackle.  A silicone sleeve slipped onto the hooklink before tying the loop makes for a neat, tangle-free covering of the loop knot once the hooklink has been connected. 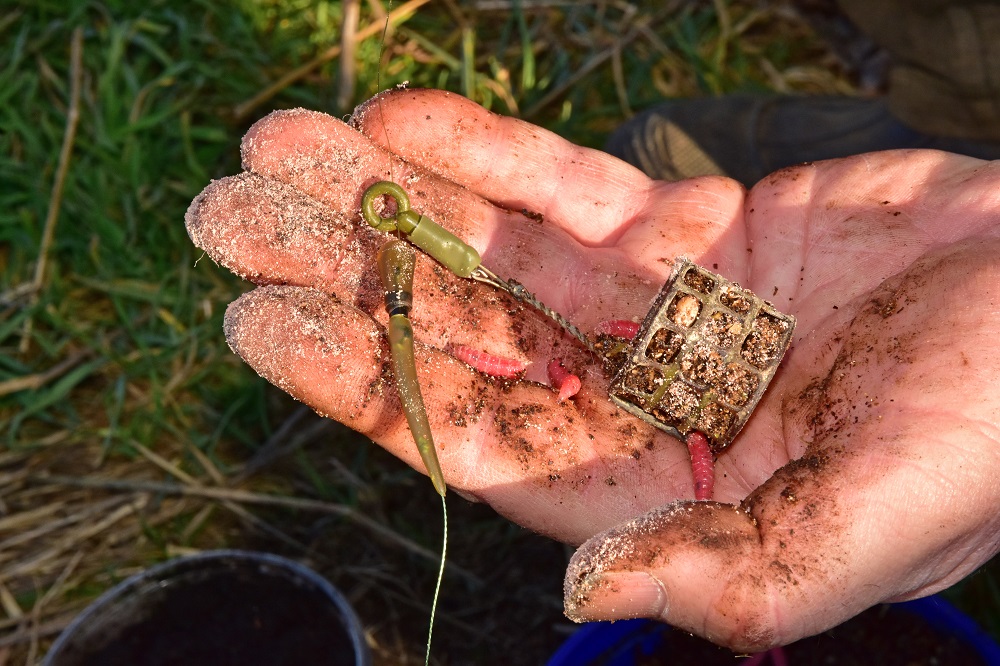 The bait for the session was also relatively simple, as the hookbait was going to be lobworm, attached straight on the hook, with the tail nipped off and then hooked on as well. This helps to leak off plenty of natural juicy attractant.

To add to the attractor package, I was going to use a small cage feeder with Dynamite Grubby Groundbait (one of my all-time favourites), as the main feed component, mixed with a splash of water and a good helping of the new Worm Liquid Carp Food to add to the pulling power as it contains real worm meal. 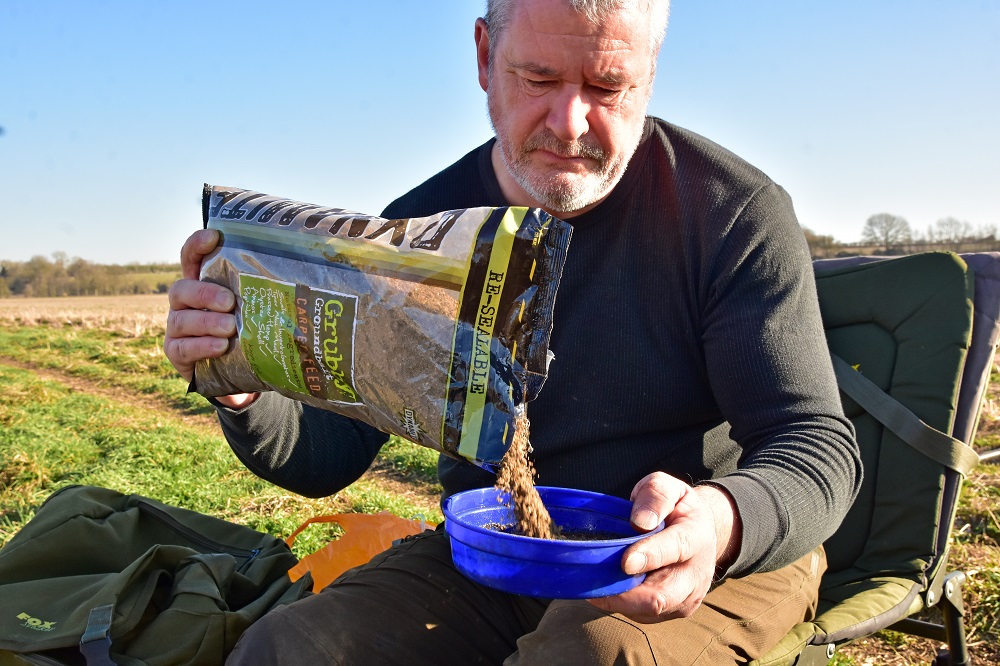 Unlike many perch anglers, Tony likes to use groundbait in his feeder 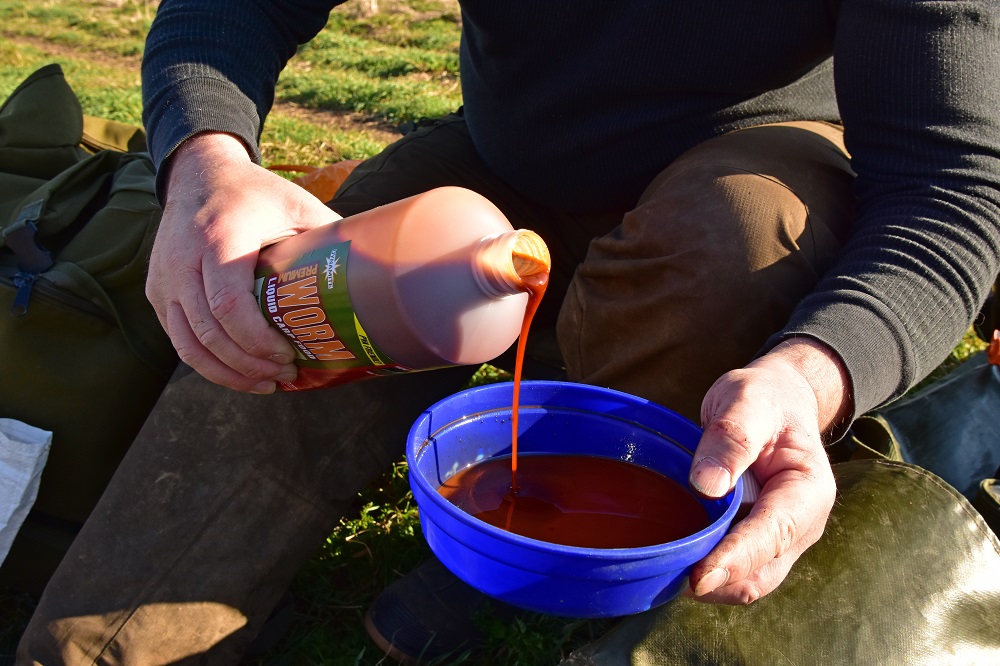 I was also trapping a few live maggots in the feeder between the groundbait, so the groundbait, liquid attractant and the maggots would all help draw both the small bait fish and the perch themselves towards the area of the hookbait.

The maggots quickly work their way out of the feeder and help the groundbait disperse almost immediately. Sometimes the perch can hit the hookbait almost as soon as the cast has settled, so you don’t want the groundbait still stuck in the feeder when you strike. Fishing a feeder in this way also accounts for the odd bonus chub in daylight hours, just as it had in the previous session, so definitely worth trying on occasions, rather than just a straight lead. 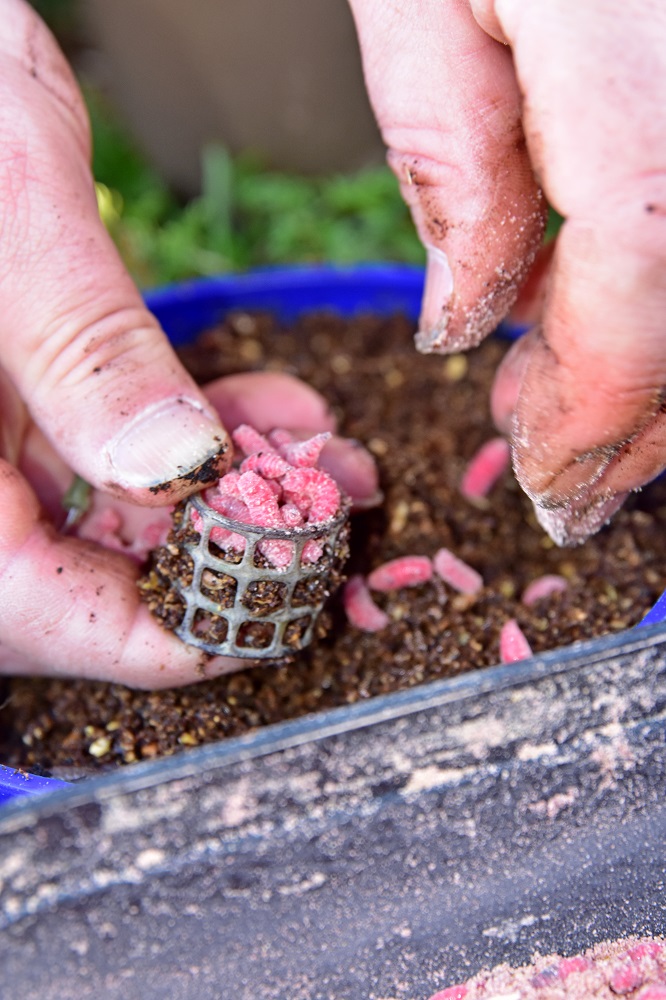 The curse of the sun…

We soon had the ‘technical’ tackle and bait photos done, helped by plenty of sun for some nice clarity and detail. However, it did seem almost too much of a good thing, as while the warmth meant that it was getting on for sunbathing weather, the cloudless sky wasn’t looking ideal for perch fishing and it looked increasingly like the last few minutes of the day were going to provide the only chance of a bite or two.

One of the tricks I often use to try and induce a perch bite is to twitch the bait a tiny bit. Not a big exaggerated movement, but just a turn of the reel handle to move the hookbait a foot or so and try and provoke a response from a fish that might have been eyeing up, but not excited enough to take the hookbait.

With no early bites on the session, I gave the strategy a try and almost immediately had a bite following a twitch of the end tackle. Excellent! Mark readied the camera for some ‘action’ shots, but the fight felt wrong for a good perch and we soon sussed that a small jack pike was the culprit. Still, it provided a few nice splashy action photos for the feature. 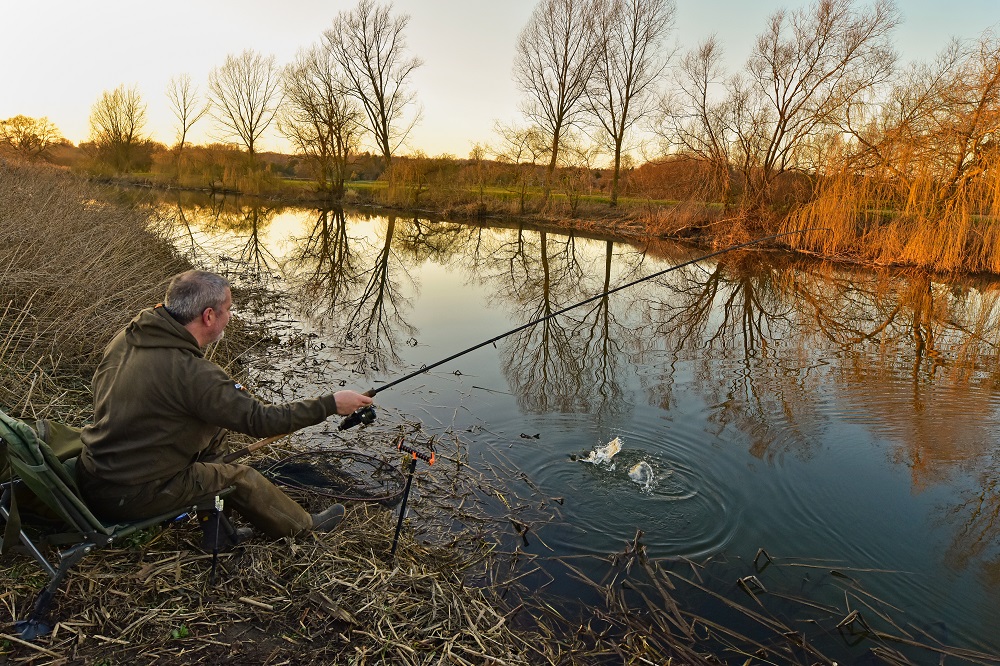 With the light starting to fade and time running out for the perch to make an appearance the tip suddenly indicated a funny twitchy type of bite. Maybe it was the presence of the camera and the added pressure to produce a fish for the feature and so maybe I stuck a little too early. Whatever the reason the strike met with fresh air and a possible chance had gone. In fairness the bite was typical of a small fish just nipping at the end of the worm, but at the time it felt like a missed opportunity.

As the light levels continued to drop a few small fish started to dimple around the area where I’d been casting. Had the groundbait etc. started to attract a few bait fish to the area? It was impossible to know for sure, but it added to the expectation as we were really into the last few minutes of the session. 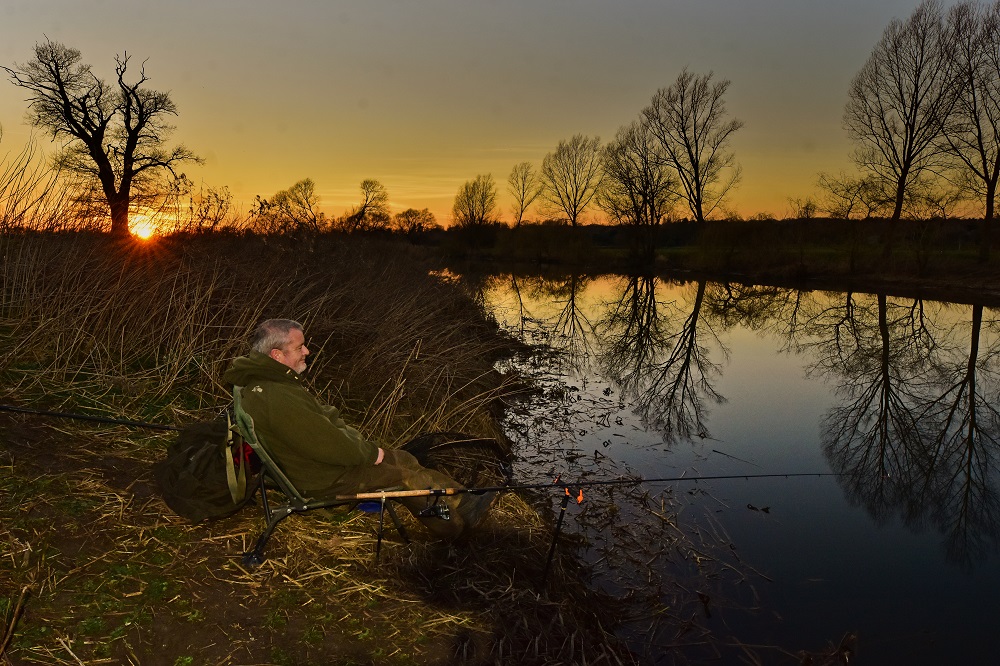 Would darkness bring a bite?

I commented to Mark that in the past, the signal for the cut-off period, when the opportunity for the perch bites suddenly came to a halt, was when the glow from the isotope fixed to the quiver tip became easier to see than the tip itself; but how on the last session, it was just at that time when the largest perch of the trip, a huge 4lb 5oz fish, had made its appearance. I’d just said the words, when the tip suddenly curved round in one of those lovely, slow, confident, unmissable bites… and I missed it!

Like you do, I cursed aloud, re-baited and chucked it back out to the same spot. However, the reality was the chance had been and gone. Over the next few minutes Mark gathered up his bits of camera related paraphernalia and bid me farewell.  In frustration I tried a couple more casts, but as predicted there were no further signs of a bite and I eventually had to admit defeat and headed back to the car.

In fairness it had been an enjoyable session, with great company. It’s always nice to catch for the cameras, but I was perhaps expecting too much from the area to produce more big fish after the fabulous result just a few days previous. We’d got some useful tackle and bait photos sorted and of course the self-takes of the big fish from the previous session would still make great supporting images for the feature… with everything helping to show the reality of both the highs and lows of our angling adventures.

Tony’s 4lber from the previous session