It was only my third visit to the Trent this season, and as I’m still a relative ‘newbie’ to the river I decided to explore a different section of the river that I’d had a look at the week before but had never fished. I’d noted that there was a very popular section, but a much longer section close by that had more awkward banks and looked relatively ignored; and decided to stay away from the crowds and try the less popular section for my 72hr session.

For the first 48 hrs of my session, where the conditions hadn’t been great, with sunny days and cold/clear nights, I’d tried fishing one rod for barbel and a second rod for zander. I’d managed a handful of small barbel between about 5 and 7lb, but there’d been no signs of interest from the zander on the deadbait rod. Therefore, for the last night of my session, which was forecast with plenty of cloud cover and overnight air temperatures staying much warmer, I decided to concentrate my efforts on the barbel on both rods.

On the upstream rod I used a large feeder packed with Dynamite Big Fish River Shrimp & Krill groundbait, with added 6mm Complex-T pellets and chopped Complex-T boilies, bound together with the PVA friendly Shrimp & Krill liquid soak. While on the downstream rod I used a straight lead, wrapped in the Complex-T paste. On both rods I added a large PVA mesh bag made of the same mix of groundbait, pellets and boilie chop as I was using in the feeder and a PVA stringer of 7 or 8 15mm Complex-T boilies on each recast.

As the light faded on the last evening, the feeder rod produced a barbel of around 7lb. I’d been fishing a double 12mm Complex-T boilie hookbait on this rod and decided to switch it over to a 20mm Complex-T hookbait, the same as the downstream rod, to hopefully put off the smaller fish to an extent and hopefully leaving the hookbait for the bigger fish to find.

Things were then quiet on the rods until around 9pm when, during some very fine drizzle, the downstream rod smacked round. This fish felt like it was in a different league from the others straight away and held its ground well downstream for quite a while before slowly being persuaded to come upstream. I got it level with me and then it still continued upstream, despite some reasonable pressure from my end… often the sign of a big fish. Eventually I had it in the net and once safely up on the bank and onto the scales it weighed in at 16lb 9oz.

I’ve had bigger barbel elsewhere, but this was my heaviest river Trent barbel by 7oz and a satisfying reward for trying the less popular areas. Another barbel weighing a couple of ounces over 9lb, just on first light, rounded off the session nicely and I just managed to get packed away and on the road before some storms and torrential rain started. 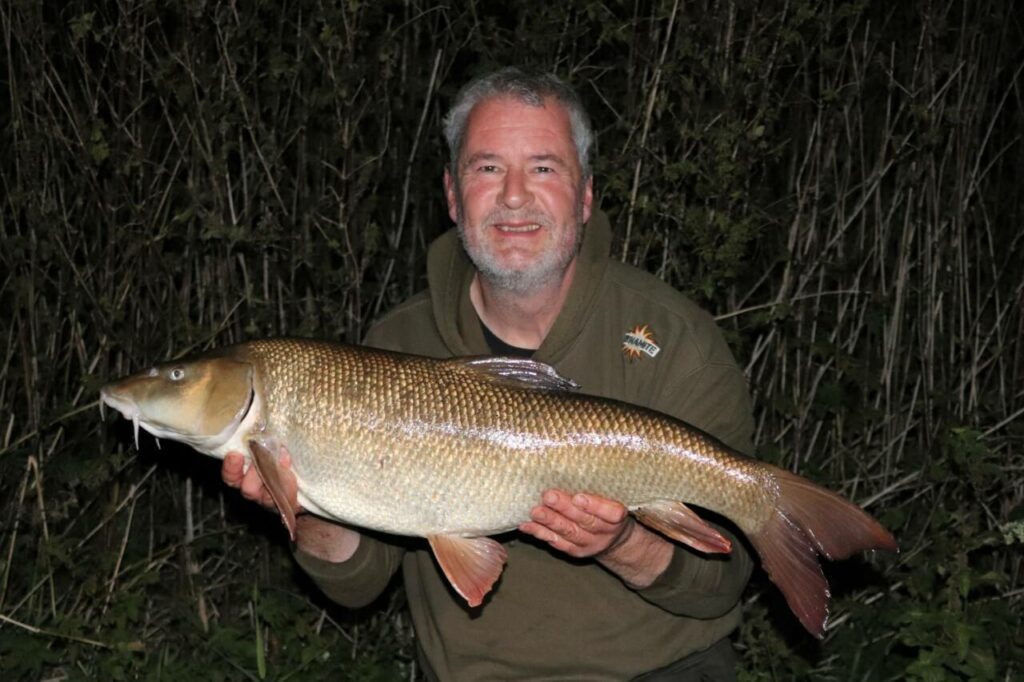