Carp angler Peter Kingsbury shares his recent birthday trip in search of carp using the ever faithful Monster Tiger Nut boilies. Here’s how he got on…

I had planned a three-night session around my birthday hoping to put the Monster Tiger Nut to good use.

I arrived at 4am and it was still dark so grabbed my bucket and started to walk around to try and find some fish. I also wanted to try a different lake on the complex as I’d never fished this one much and wanted a different challenge.

The wind was due to come from the south during my stay so I headed straight for a bay that the wind would be pushing into. After being in the swim for just a few minutes I had already heard a couple roll which quickly got the excitement levels rising.

A rush back to the car to get my tackle followed and I was soon set up back in the swim. Bait wise I opted for Yellow Hit N Run pop ups over Monster Tiger Nut boilies in different sizes with a couple of tins of XL Corn added for good measure.

I found a nice hard spot at 55 yards and put both rods on this, with a couple of kilos of bait Spombed out to keep the carp occupied. 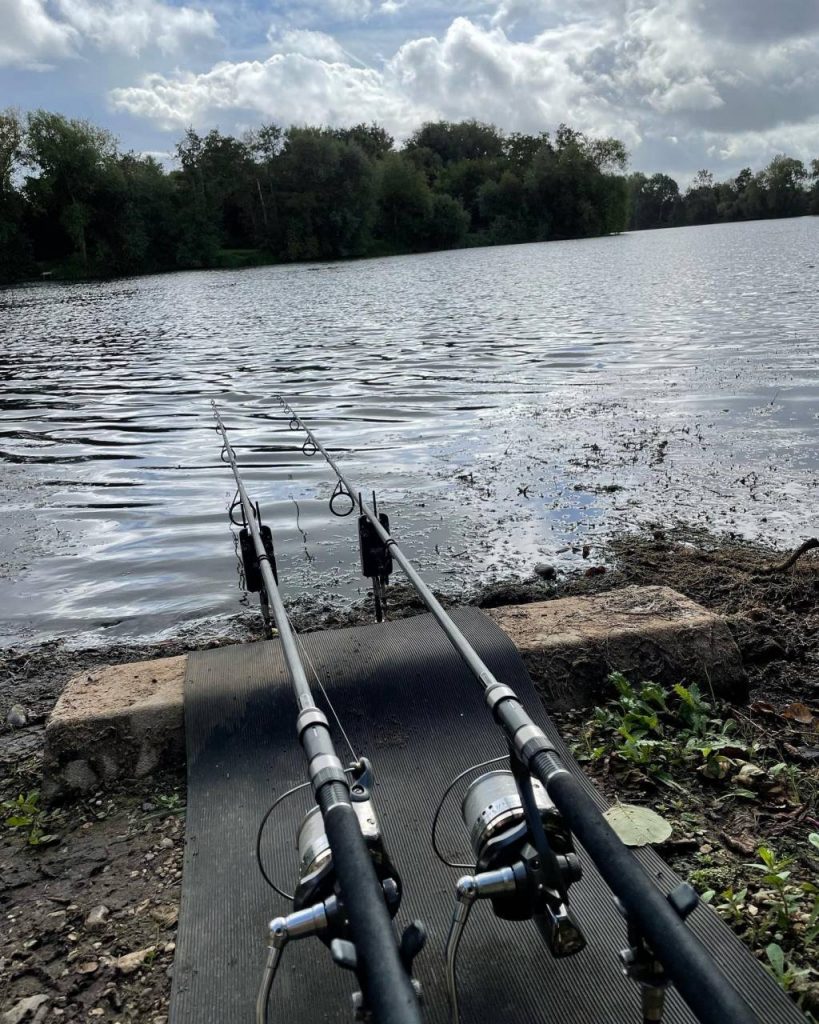 Both rods out and on the money.

Once both rods were settled I sat back with a tea to take it all in. The carp were still evident in the bay with the odd one showing and I had a slick appear on the baited area too…

It got to about 1pm when the right hand rod was away and after a spirited battle I was looking at a nice mirror of 26lb 8oz! Pics were quickly snapped and the rod was quickly cast back to the spot. 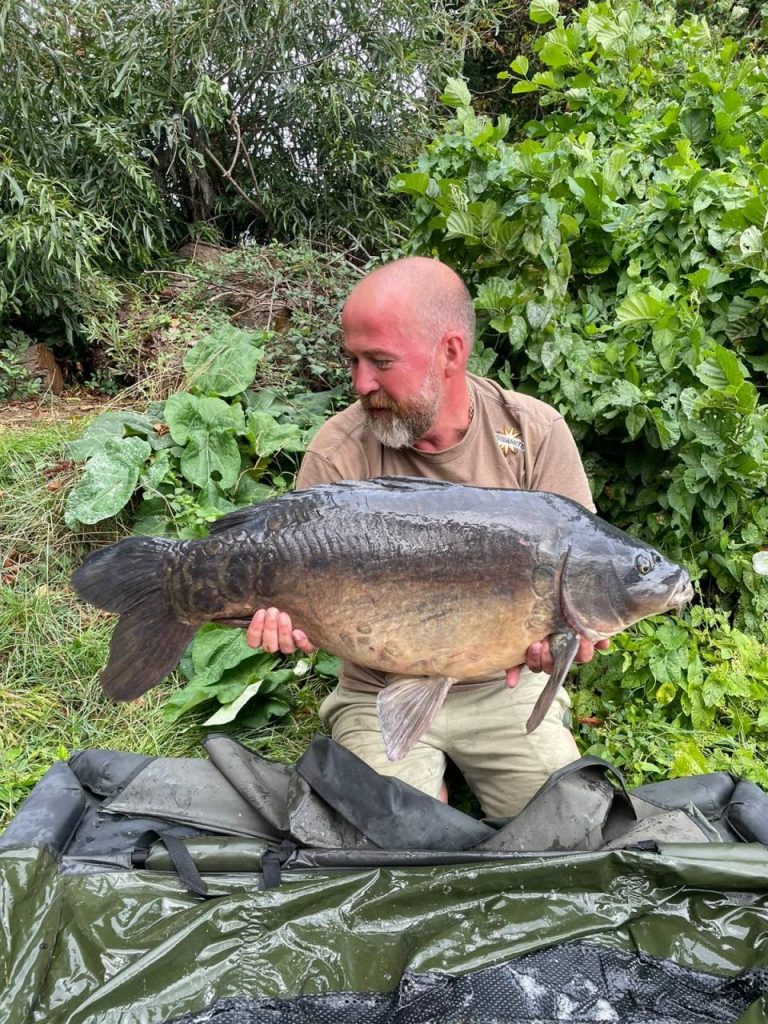 26lb 8oz – not a bad start to the birthday three-dayer!

At 3pm the same rod was away again – this fish flat rodded me at 55 yards and I quickly had to give line! It was intent on trying and reach the opposite snags and I had to apply a bit of side strain to try and coax it away.

Unfortunately it wasn’t meant to be and the hook pulled. I rebaited and got the rod back in position before sitting back down to lick my wounds.

A couple of hours later it was the left hand rod’s turn to take off and I landed a lovely clean common of 19lb 8oz. 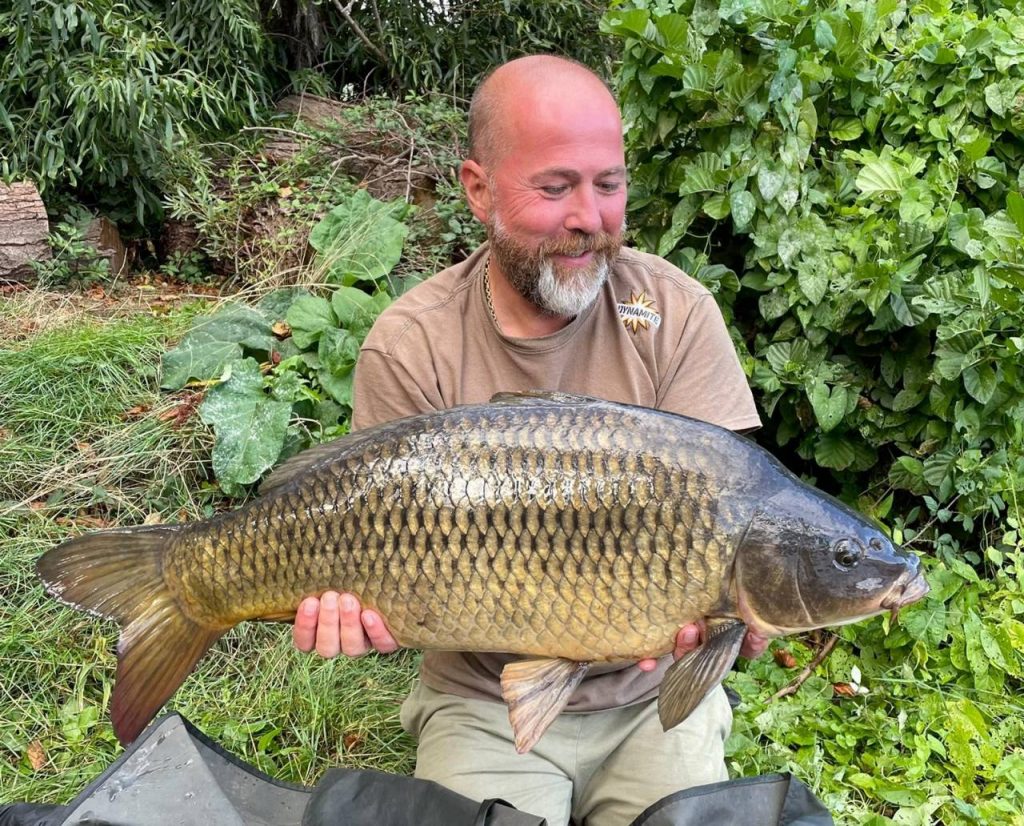 The night passed uneventful and I was up at 4am to see if they were still evident in the bay but after 10mins it became clear that they had moved to around the entrance of the bay, so with that in mind and rain forecast for most of the day I moved swims to enable me to get back on the fish.

The swim that I was moving to had already been good to me earlier in the season so I could quickly wrap up a couple of rods in good knowledge that the rigs would be on the money.

With that in mind, I positioned two rods on singles whilst I got the rest of the gear sorted and waited for it to get light.

I left the rods in with the singles until around 12pm when I would in as I needed to go to the shops and get a shower. I returned around 2pm feeling refreshed and got the Spomb out again to give them some bait.

I put the rods back out the marks and introduced around 3kg of MTN boilies and corn.

At 6pm I noticed a slick forming on my spot due to the fact that I soak my boilies in Tiger Nut Evolution Oil and when they get disturbed or eaten it creates a superb slick.

All of a sudden the right hand rod was away and I bent into this and straight away I could feel the line grating on something. Before I could really do anything I was cut off…

Gutted was an understatement, especially to have lost another one and to have to reset the whole rod! Oh well. 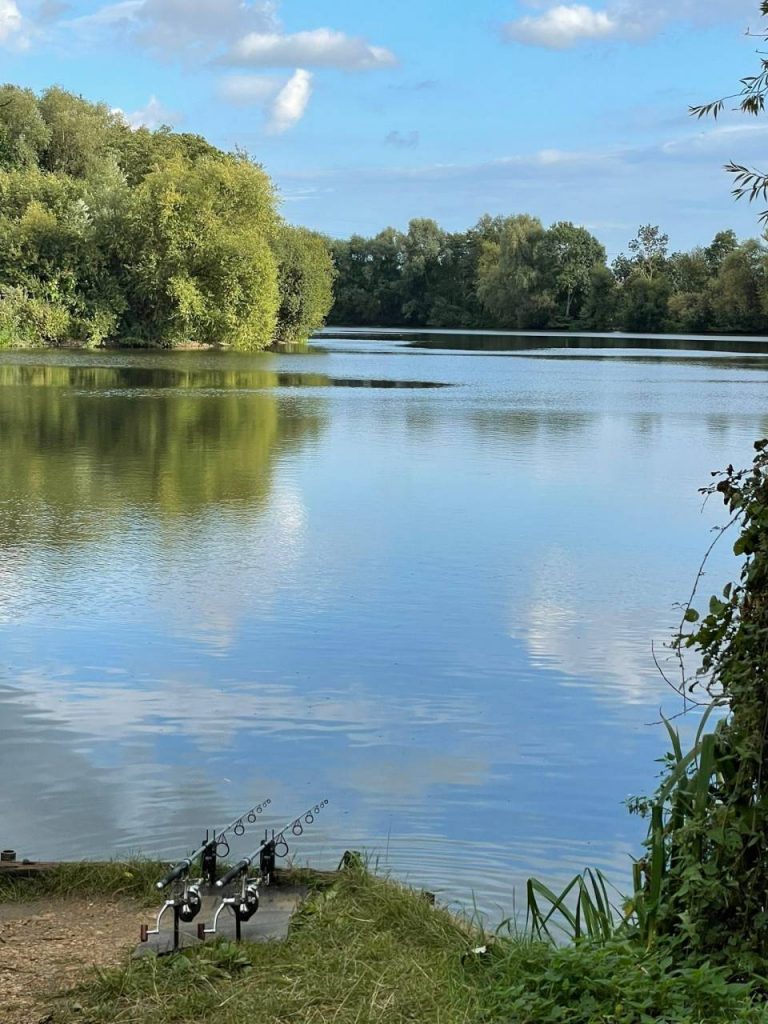 Slicking on the spot…

Once done, I recast back to the spot and had some some dinner before calling it a night as getting up early had taken it’s toll.

The night passed again uneventful and again I was up at 4am. I was still gutted as the fish didn’t seem to be active in the zone any longer. I gave it till midday before going for a walk around as I had one more night left to go.

I returned after a couple of hours after walking around a couple of the lakes but it was extremely busy and I didn’t see a great deal to move to.

I had a quick bite to eat and then decided to put the rods back out and put only a couple of kilos over the top in hope they’d come back to the bay in the later part of the afternoon.

After getting my head down for a couple of hours, I was up at around 5pm, put the kettle on and watched the water.

10 minutes later I see a large fish come up slowly and sink back down with hardly any sign of disturbance in the zone and if you wasn’t looking straight at it you would definitely not have seen it.

This definitely changed things in my head as it must’ve known there was bait in the area and it’s likely it wasn’t on its own.

The shows and activity increased and at 6:30pm the right hand rod was finally away.

I had changed so that I was practically fishing locked up and ejecting the leads which helped bring the fish up in the water. After a very hard fight close in a netted what could be my first 40 from the new lake.

I got everything ready, lifted her out and she weighed an impressive 39lb 12oz – Close but no cigar!

With the pics done I returned her and was later told it was a fish aptly named as ‘The Birthday Fish’… You couldn’t make it up! 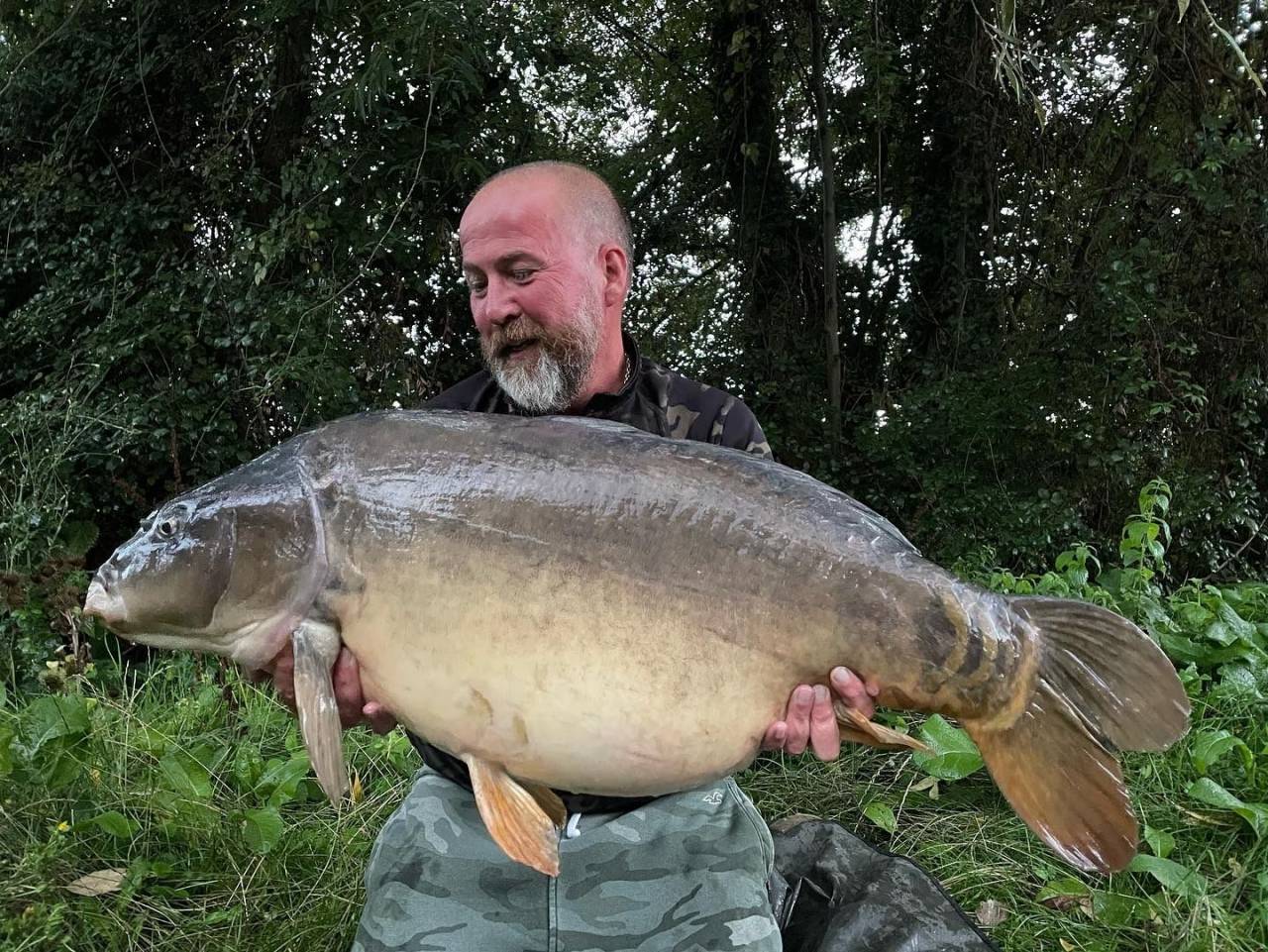 An aptly-named fish for the birthday boy! 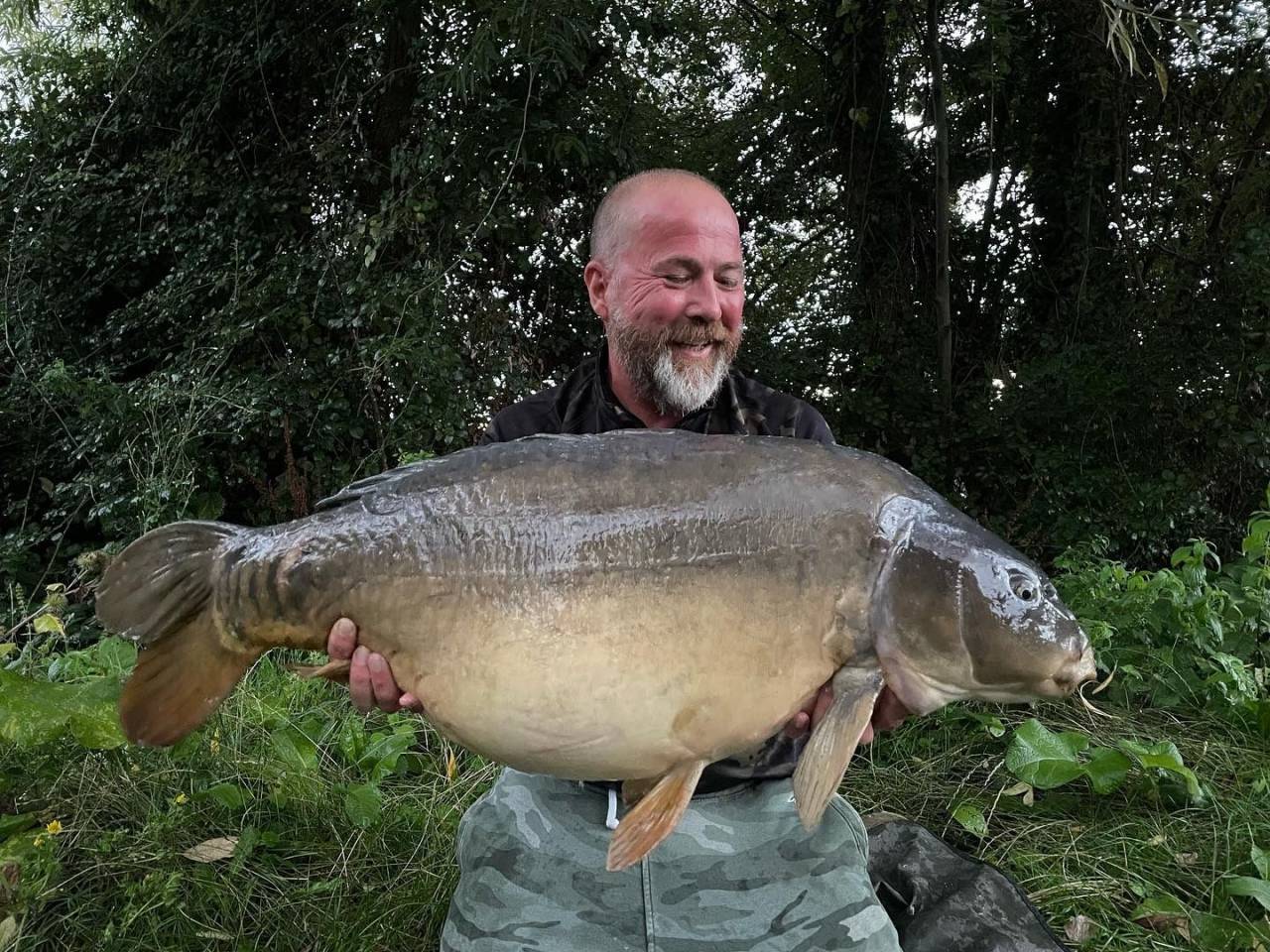 I repositioned both rods just as it was getting dark and unfortunately no more action came, but what a great birthday session with two losses and 3 fish landed!