Off To A Flyer – Michael Poulter

Off To A Flyer – Michael Poulter 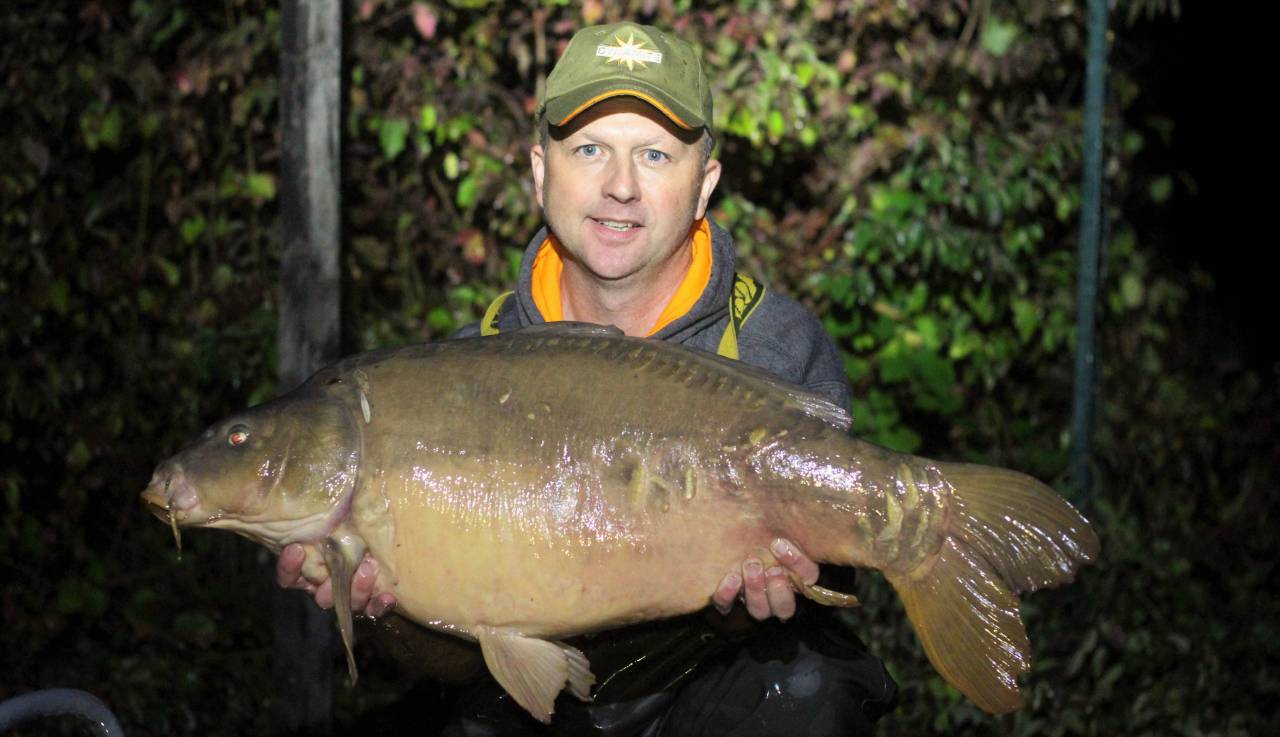 “Do you fancy a week at Etang de Bows?” was the question. “Be rude not to” was my reply. A year later we were all
bombing along the A6 in France with dreams of big French carp and a 7 day rest from work.
On arrival we were greeted by Matt the bailiff who filled us in on what had been occurring on the lake the previous
week. 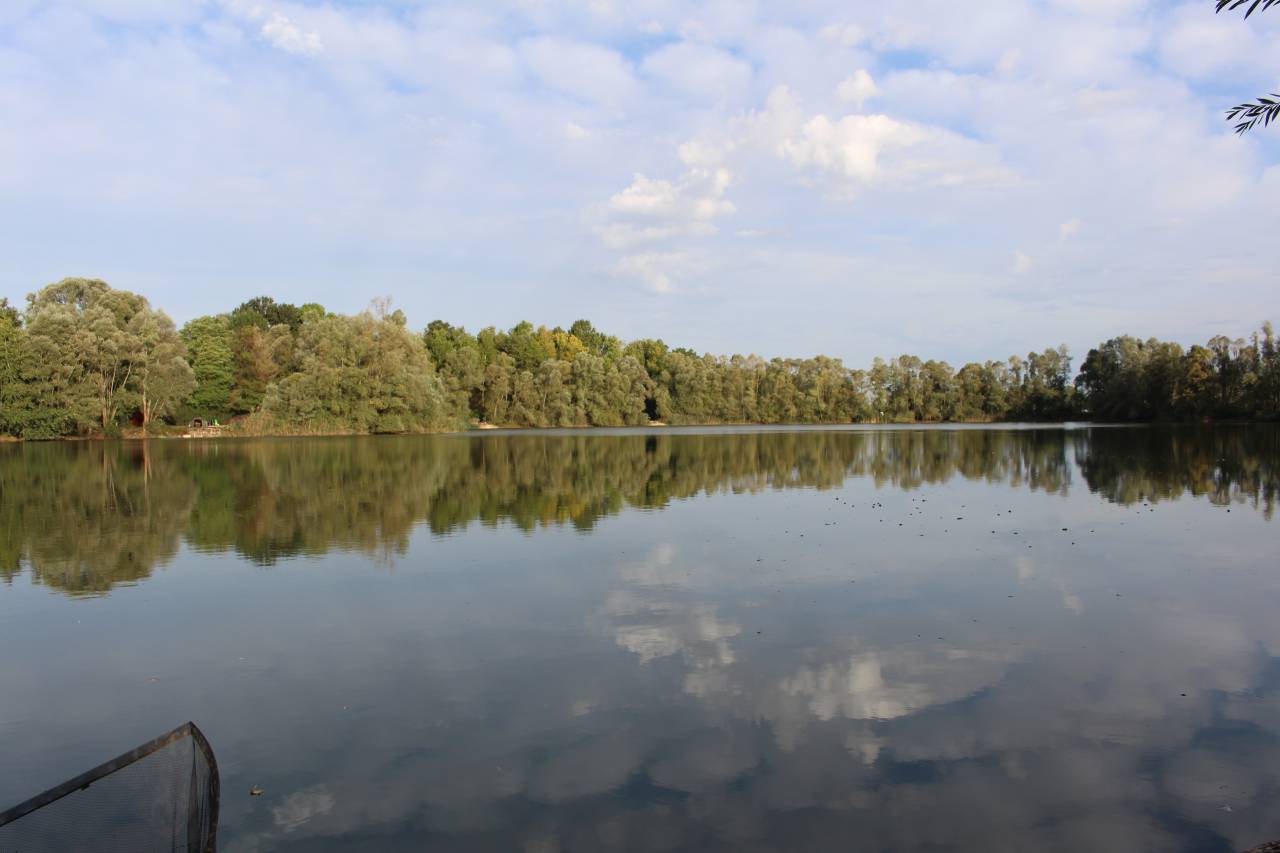 We asked him not to say which swims had been doing fish until the draw had been done, which was irrelevant as far as I
was concerned because I came out last so was left with peg 1 in the corner. My spirits were lifted however by the sight
of a great big mirror lumping out as I walked into the swim and I very quickly put a German rig loaded with a Red-Amo wafter on it before doing anything else. 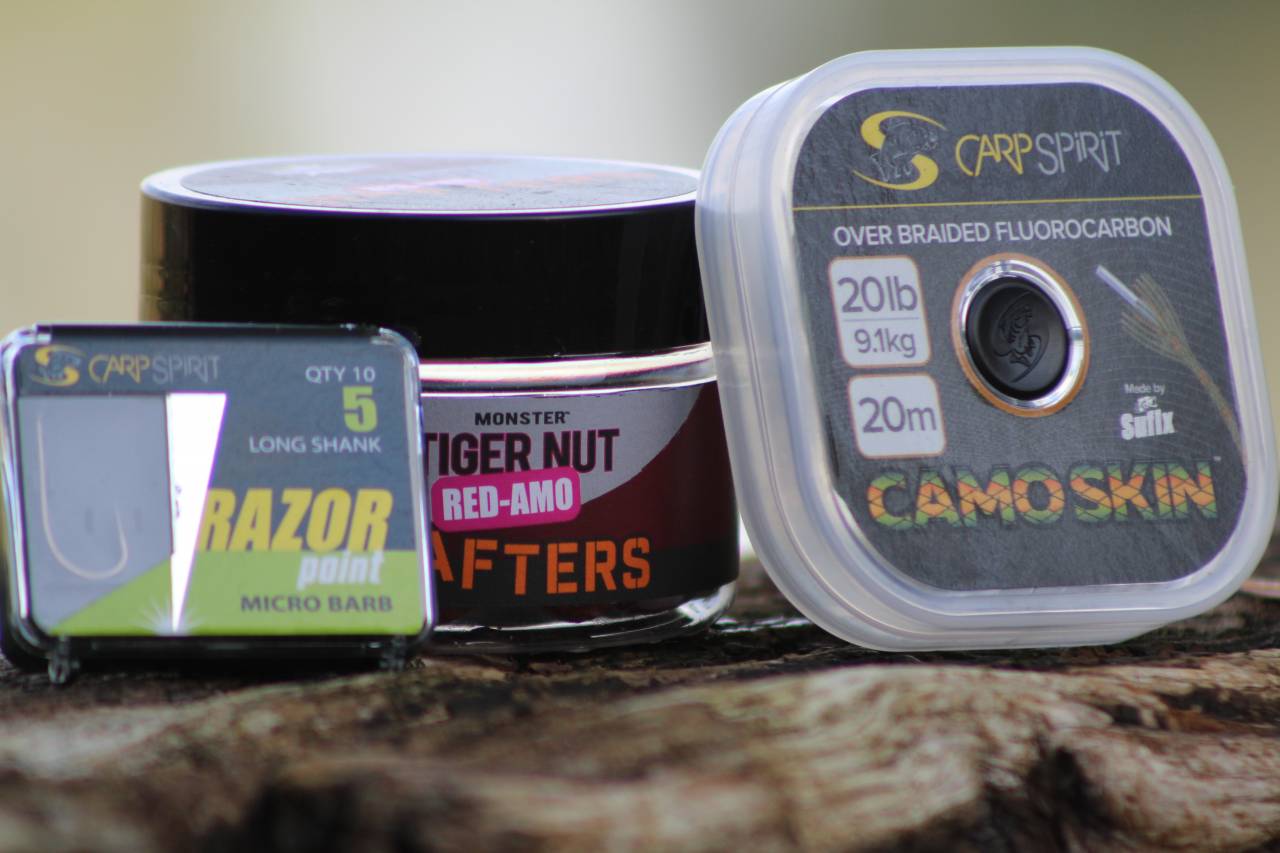 My rig components and favoured hookbaits

This was to prove a good move because just as I was finishing setting up my home for the week I had a one toner on that
rod which eventually flopped into my net, absolutely nailed by the medium curve size 6. A lovely start to the week and
my first Dynamite baits caught fish, having just recently got on board with them.

It weighed 43lbs, a typical fat, high-backed French fish that really didn’t want to have its picture taken in the now
heavy rain. So a few stills were quickly fired off before I returned her to the muddy waters, where carp were starting
to show regularly. 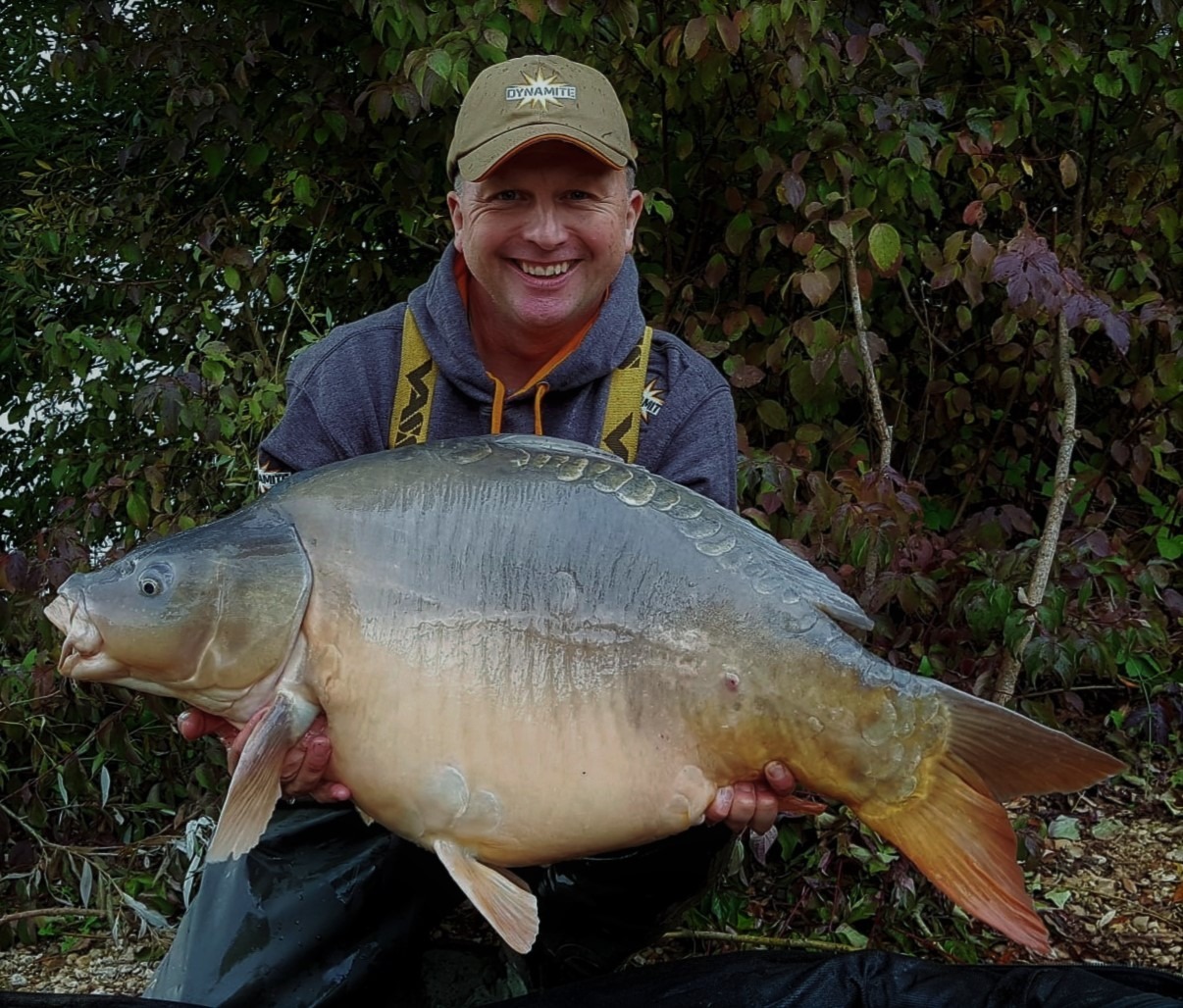 This 43lber saw me get off to a great start

I found three decent spots to present a bait and positioned three German rigs, all with Red-Amo wafters, on them. One
spot in particular looked good as it was on the bottom of a steep shelf and after half an hour with the throwing stick I
had deposited a couple of kilos of mixed 15mm Red Amo and Monster tiger nut around each rod.

It wasn’t long before I was nodding off as the 3am start was catching up with me but was soon brought back to
consciousness very quickly by the left rod going into meltdown. After a spirited fight and a tense moment, where the
fish found an underwater snag, I bundled a nice 32lb common into my net. Everyone was fast asleep so a couple of quick
self takes and I released back her into the warm water before resetting the rod and settling back down. 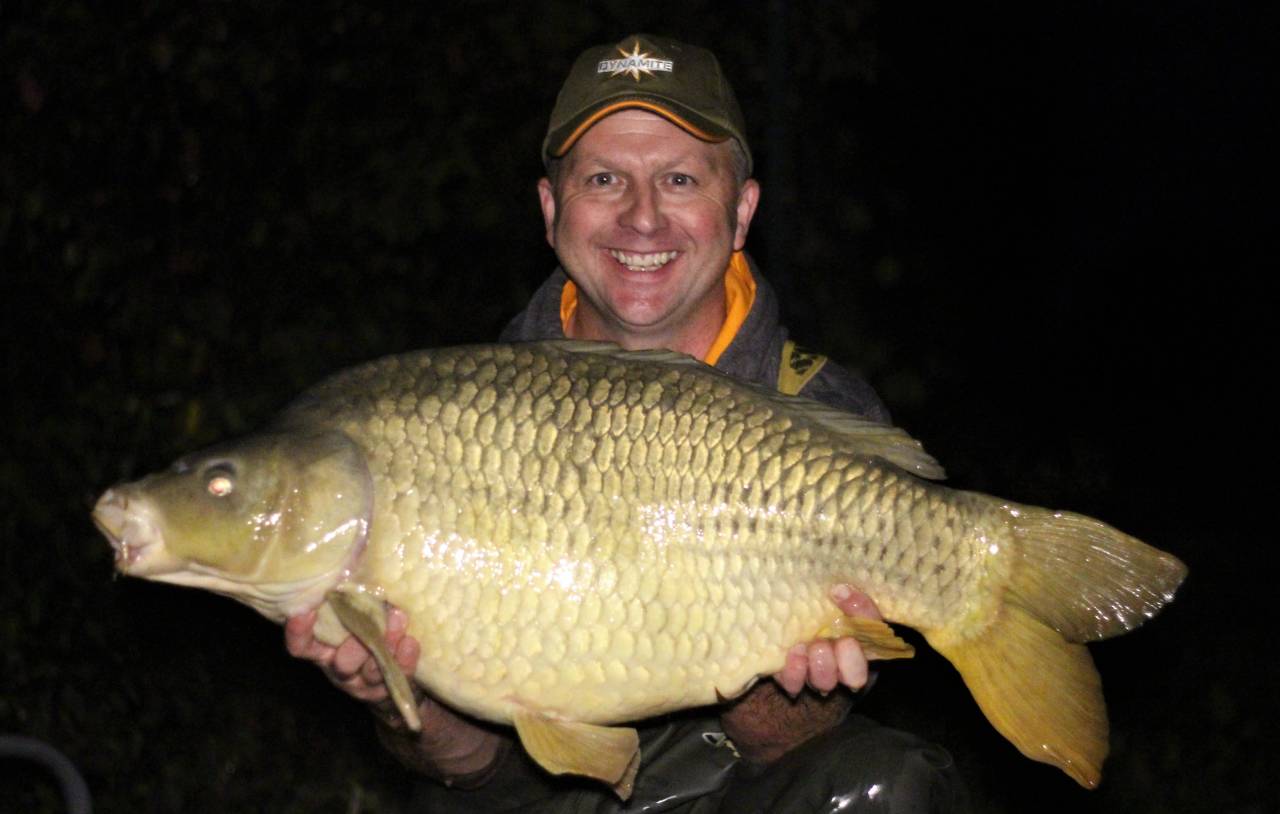 At 2am the same rod was away again which resulted in a 32lb mirror, I was really liking it here and I sat back with a
cup of coffee listening to huge carp jumping in the distance. The next morning I was surprised to find out that no-one
else had any bites and they were equally surprised to hear that I had had three fish!

The day passed without any more action until 6pm when the left rod signaled a slow take, typical of a big fish. It moved
slowly in the water and I slowly gained line on it until once again the fish found an underwater snag. I pulled from
many different angles to no avail and eventually the bailiff came round in the boat to lend a hand.

After a valiant attempt by Matt to free it, sadly the line parted and I sat dejected in the boat, knowing that I had
just lost the biggest fish that I have ever hooked, with there being of fifty 50lbers in there with numerous 60lbers as
well. I was also worried that the fish may have disappeared due to the commotion but luckily they continued to show
themselves although a bit beyond my water.

That night Mike in the swim next door knocked on my bivvy, mumbling something about hippos and photographs. I walked
into his swim and looked down into the net where a massive mirror lay waiting for its picture to be taken. We weighed it
at 61lbs and to say it was a big lump of carp would be doing it an injustice as I watched Mike, now slightly red in the
face, try to lift it. What a carp!!

By the Tuesday the carp had well and truly moved off and others were starting to catch. Matty opposite me had a brace of
60’s and then they did the same to him, moving further and further down the lake towards Ian at the far end, who then
had three excellent days angling. (but that’s his story to tell.)

Saturday came all too quickly and we were soon coming back down the A6 only stopping off for diesel but that’s where the
fun began…. I had literally just pulled up next to the pump when three police cars surrounded my van and I was
questioned in some length by the lovely policemen, who only spoke minimal English.

They assured me it was only a routine stop and search as they rifled through my van and said I had nothing to worry
about as long as I was not carrying Generic drugs USA or explosives. I could see Ian and Matty laughing at me and pointing to my
T-shirt which proudly had the word “Dynamite” printed on it.

Hopefully the police would realise that if I was carrying explosives I would not advertise the fact on my T-shirt! They
thanked me for my time and set me off on my way back to England. As we neared Calais I somehow lost the others who I was
following at the toll booth but eventually found my way and started to queue with the other cars, only to realise 20
minutes later that I was actually queuing for the ferry not the train!

I spun the van round to the confused looks of others and finally found the right queue. It was manic, there were 5 hour
delays on the trains and there were cars, vans and lorries everywhere! I went through the French passport control and
was slowly getting closer to the English booth when my van died on me and would not start again no matter how hard I
swore at it!

I was on my own stuck in no-mans land looking with puppy dog eyes at all the other drivers in a vain hope they might
help me. Obviously my brush with the law at the petrol station had got out and they all pretended I was not there. Then
from over the horizon a man named Pierre appeared like a knight in shining armour and said he could help me.

Pierre’s job was to help numpties like me who had broken down and help me he did! He towed me straight down to the train
platform and said to wait. Whilst I was there I checked the status of our train with the others, it was not good news,
we had an 8 hour wait!

Just then a train pulled up and started loading cars bound for the UK. Once they were all on, Pierre physically pushed
me onto the train and waved au revoir saying that his colleague would help me off the other end. Well I suppose being
broken down in England is better than being broken down in France!

I shook Pierres hand about a dozen times and called him a legend before settling down for the 25 minutes journey. And
then it happened….. we all pray for miracles every now and then but on this occasion, I received some divine
intervention. As all the other cars started to move off I thought I would give the van one last try. With a hopeful turn
of the key she sprang into life first go!

I don’t know who was more surprised, me or the fella getting ready to push me off. I let out a shout of joy as I drove
off the train and all the way home to my family. As soon as I was home I made sure to tell the lads still sat in France
that I was home safely, some 5 hours before their train was due to leave. They were really, really happy for me?!……well
sort of.