An inspiring story from Adam Whittington of three friends fishing a secluded lake in the North of France. Beer, rats and a hell of a lot of carp banked – this is how fishing trips abroad should be!

French Carp fishing at its finest… Last Autumn saw three of us headed to a Northern French lake in a heavily forested valley, filled with wild boars, and more than a little mystery.

It was a locally run venue with no facilities to offer. Water had to be brought onto the lake and there was a delightfully constructed toilet which amounted to a bench seat and a long drop into a nearby river. Whilst the amenities were somewhat lacking, the water was clear, with abundant weed and the few pictures we had seen over the years showed the carp to be dark, characterful and big enough to impress.

I settled for a corner of the lake which offered plenty of snaggy areas and a good view out into open water. My two fellow anglers were spread hundreds of yards apart, the idea being that we would cover as much area as possible and then meet for breakfast and a debrief the following day.

There was no actual swim in my chosen area, so a few minutes of hacking away at the undergrowth was needed just to allow access for my rods. Bait-wise, I used the ever faithful CompleX-T sliced into discs and soaked in Shrimp Extract with a similar amount of Frenzied Hemp and soaked Betaine Pellet.

Three rods went out with the bushwhacker pole for the first night, and a bottle of local red wine was opened with great ceremony. That first night was memorable for the sheer brightness of the harvest moon, making a torch redundant – you could have easily tied rigs at midnight. 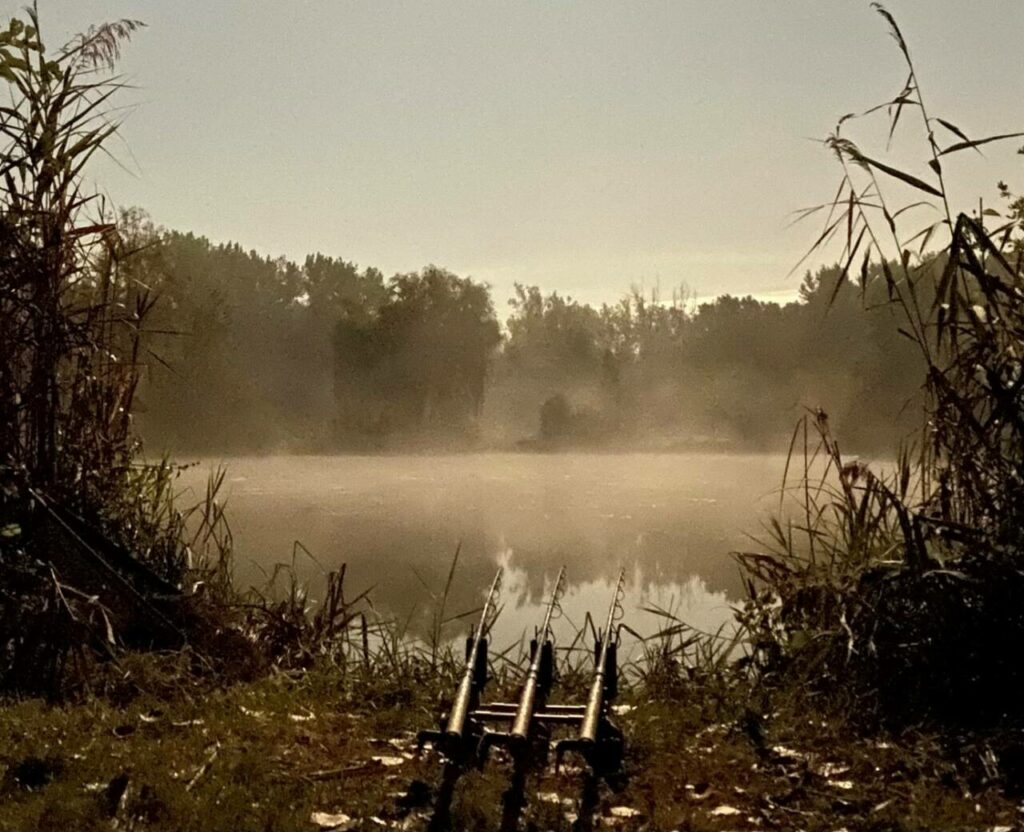 Remarkably, this photo was taken at 1:20am!

The crazy light conditions brought a real air of expectation and I finally nodded off at around 2am.

An hour later and my left hand rod melted off causing me to stumble, bleary eyed from my bedchair, to do battle with our first from the valley. The fight went my way and I was soon looking down at a fabulously proportioned common in the moonlight. Thirty five pounds and ounces will definitely do for a start! 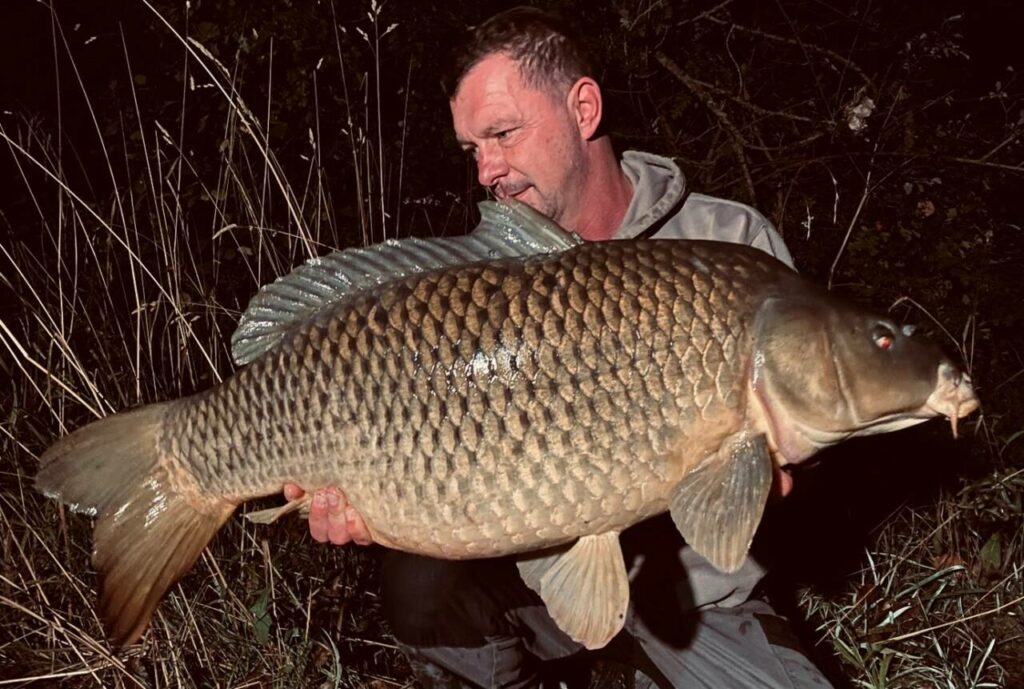 Great news at the breakfast debrief was that Andy Mackie had landed a brace of forties and also related tales of a huge rat infestation in his bivvy.  At one point, there were so many underneath his bedchair that the sound of rats fornicating and fighting echoed around his swim. Rather him than me, I was quite happy in my rat free corner. 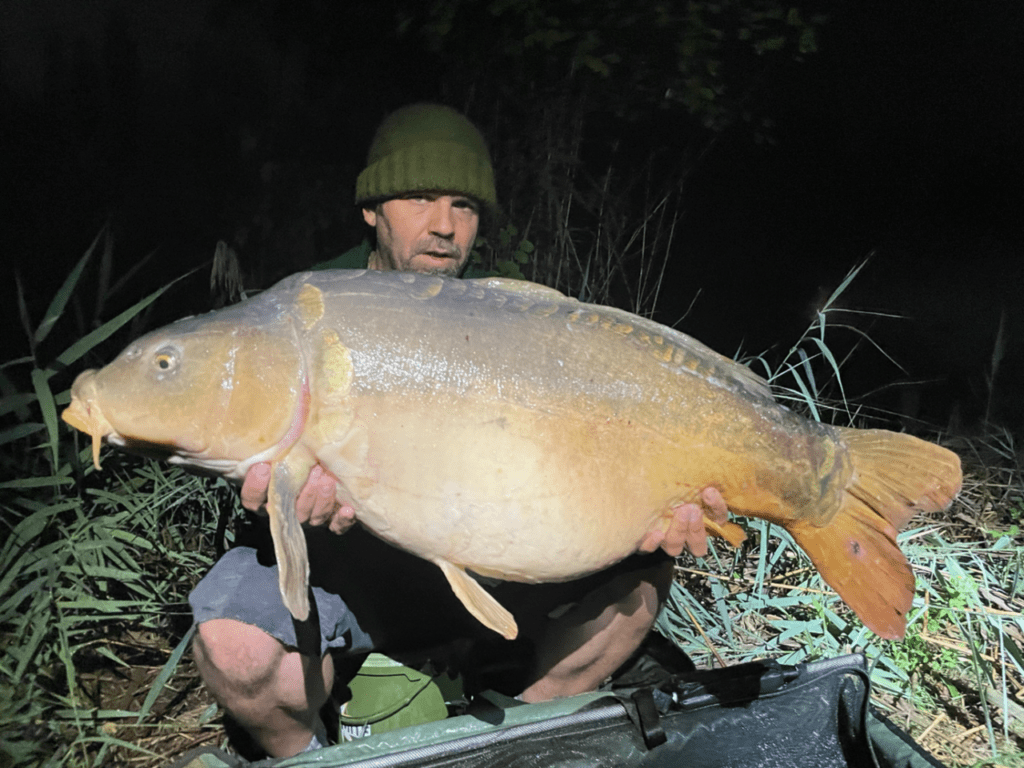 Wandering about in the warm Autumn sunshine gave little in the way of clues regarding where all the carp were hiding, and a chat with the local bailiff did nothing for the confidence as he told of huge fish kills in the valley due to deoxygenation the previous year. Our intel was at least a year old, so the concern was we may be fishing for ghosts…

I finally found a couple sat up in the snags just yards from my remote corner. It was hard to reach them from where I’d done the night and was more a case of fishing one rod just a few yards off the snags and hang on for dear life if one is hooked. Shit or bust territory, but worth a go. 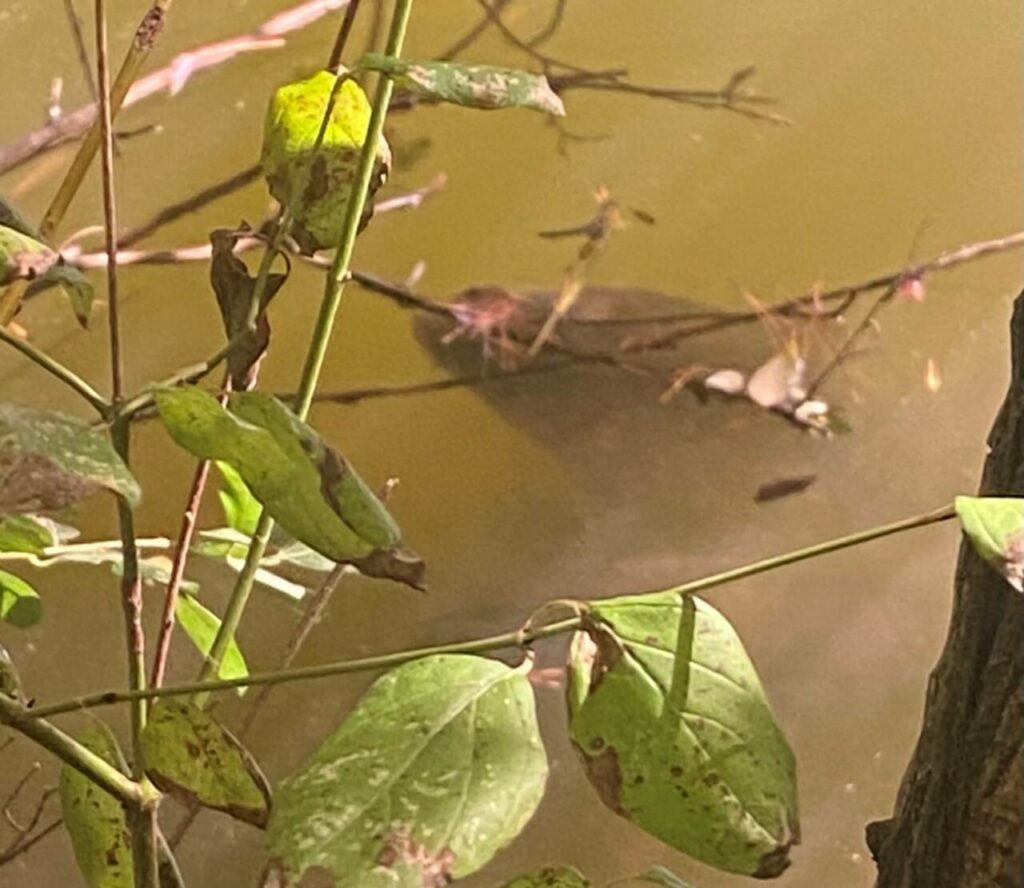 During the second day, Adam discovered some carp under an overhanging tree. Game on!

It was only thirty minutes or so after my little pile of CompleX-T discs was poled out to the edge of the snag that the tip whacked round and the swearing and sweating began, as a furious mirror repeatedly bored towards the branches. Thankfully all held and an immaculate fish rolled into the net. A young looking, scaly upper twenty and an encouraging sign for the future. 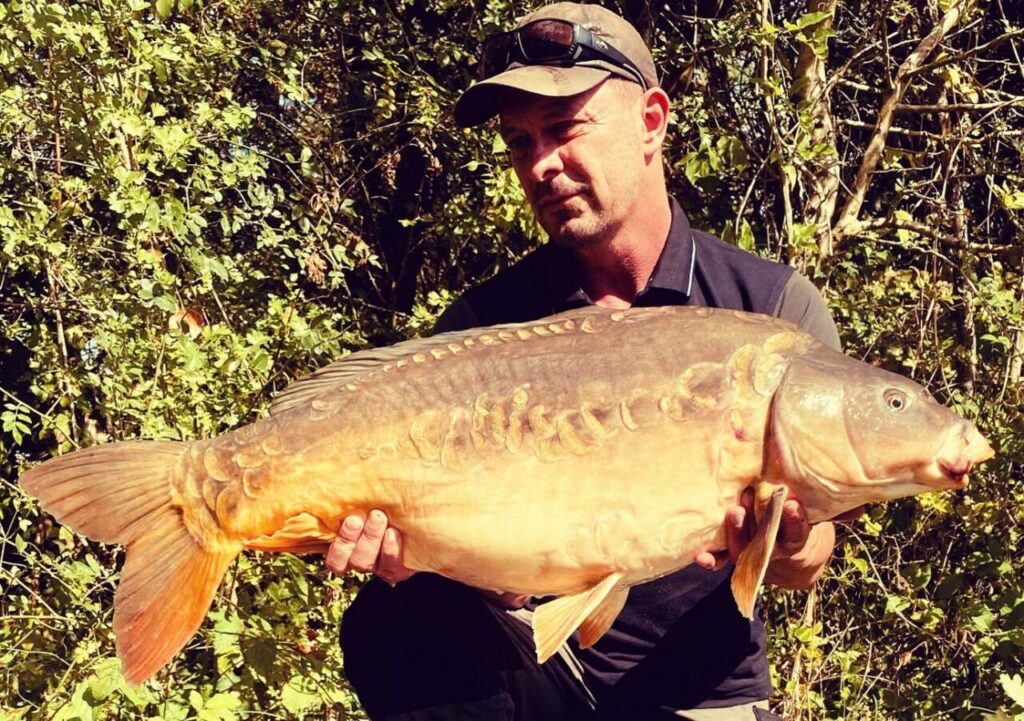 A quick bite and a fine mirror finds its way to the net.

My next bite from the snag was a real plodder and hugged the bottom from the off. I was really expecting a giant to pop up, but was happy enough with an ancient looking mid-thirty mirror that was lean as a whippet and would have weighed much more in its heyday.

A real character though and a refreshing change to see variety in the French lake rather than the generic Royale strain carp that populate so many waters over there. 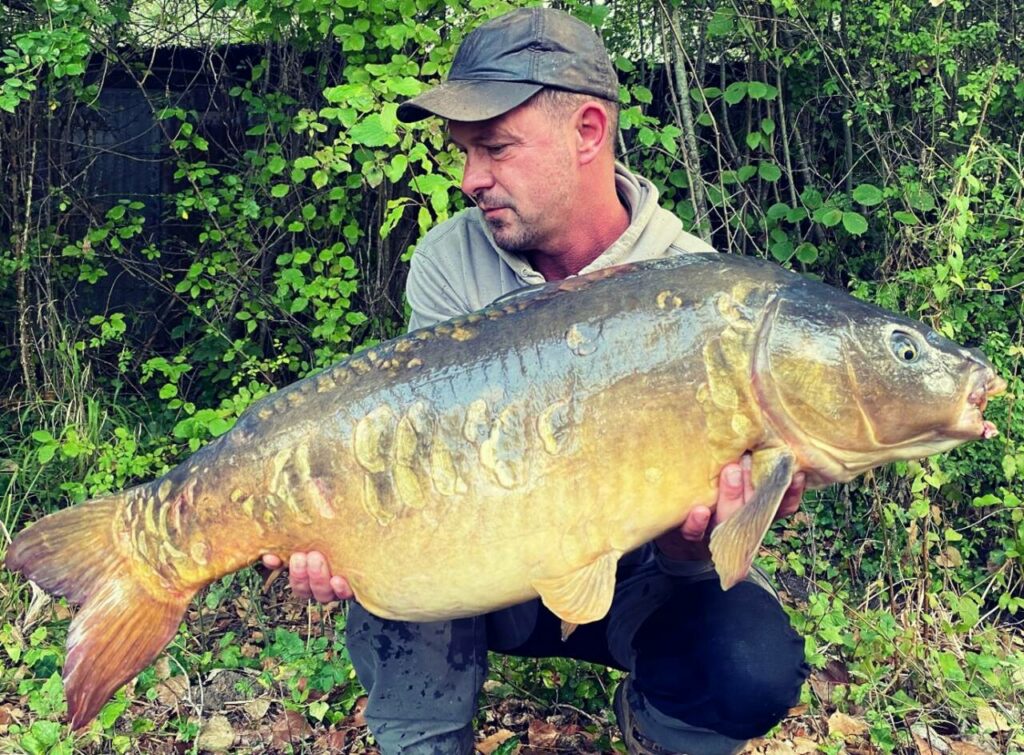 Lean as a whippet this one.

The main body of the lake was mainly silty and by the second day, carp started making themselves known in some style.

There was a real pattern to their behaviour where you would see the first fizz, then another and the intensity of the fizzing and the numbers of fish would grow before your eyes. It was as if the confident feeding of one fish encouraged the next and the end result would be a large proportion of the lake’s population feeding in a shoal.

Fish were caught from open water by my friends and all looked set for a great week. A noticeable pattern was that any fish landed from an open water shoal seemed to spook some of the fish into my little snaggy spot. I started sharing the spot with my friends and, between us, we landed fish every day from this one rod hotspot. 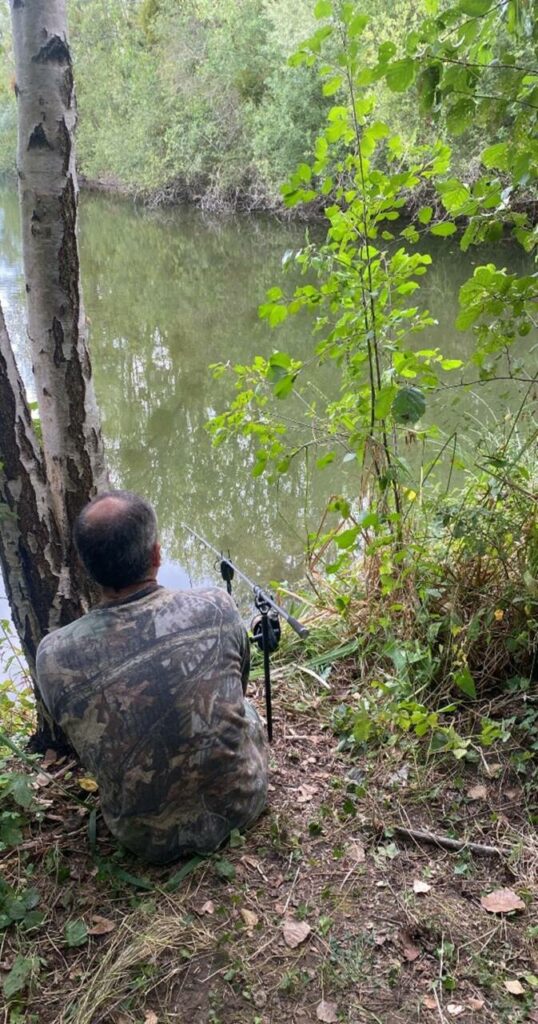 The trio each took it in turns to fish this intimate, snaggy swim.

The fish were all very different, with some ultra hard fighting males and knarley old warriors that seemed as ancient as the woodland around us. Great times and we gradually settled into the rhythm and cycles of the lake, catching fish along the way. And they got bigger, with a few forties gracing our nets. 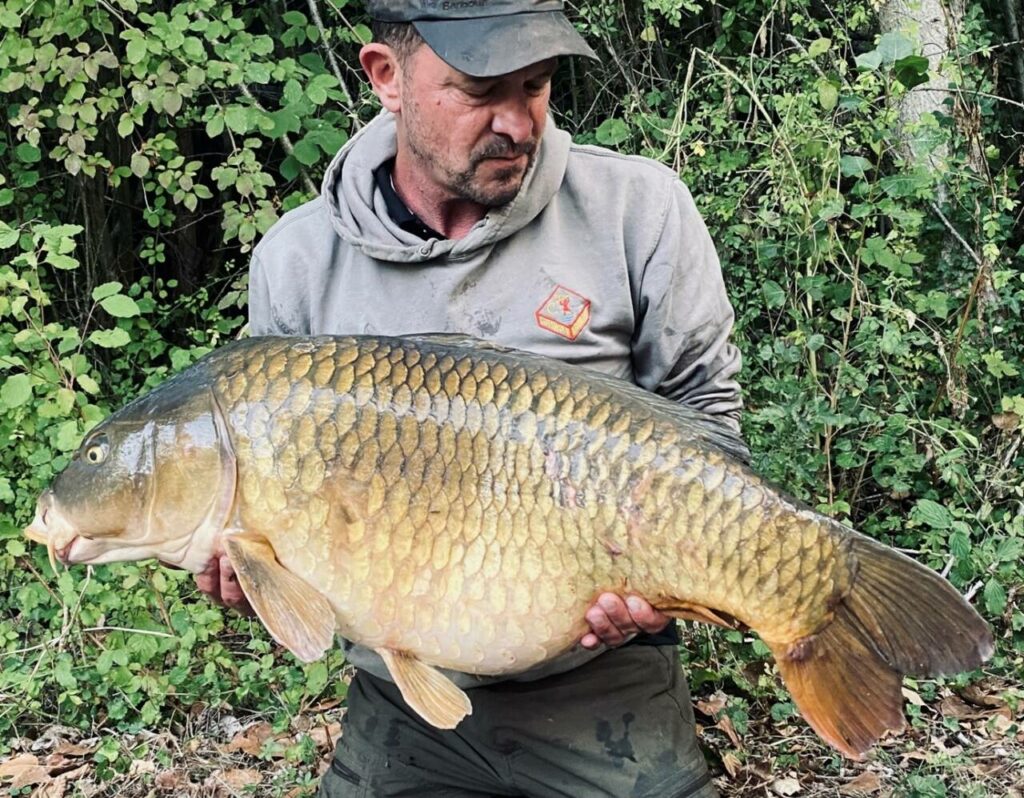 8. A low 40, appearing as ancient as the woodland around them.

Whilst the fish were not as pressured as many in France, they certainly knew they were being fished for and seemed totally unforgiving when trying to get a bait to them. For example, when they were really going for it in open water, there might be a dozen individual patches of bubbles in a shoal that may be thirty yards across.

An exciting sight and hard to resist, so we would ever so gently ship out a baiting pole to just short of the nearest fish, the idea being we could nick one from the edge of the shoal.

Almost every time the fizzing stopped, as if a switch had been thrown. It wasn’t just the fish nearest the pole that stopped fizzing, it was all of them and it was pretty instant. I’m pretty sure the pole, however gently deployed, was spooking the nearest fish and it was the actions of this fish that spooked the next carp, and so on.

Think of it as a Mexican wave of spooking – scare one and you scared them all. I’ve never seen such a stark example of this behaviour before but it makes absolute sense that it will, to some extent happen on all lakes. This lake in particular seemed to have a distinct shoal that stayed together which, combined with the silty bottom, illustrated the behaviour perfectly. We got around the problem to some extent by guessing where they WILL be, not where they are and plan ahead. 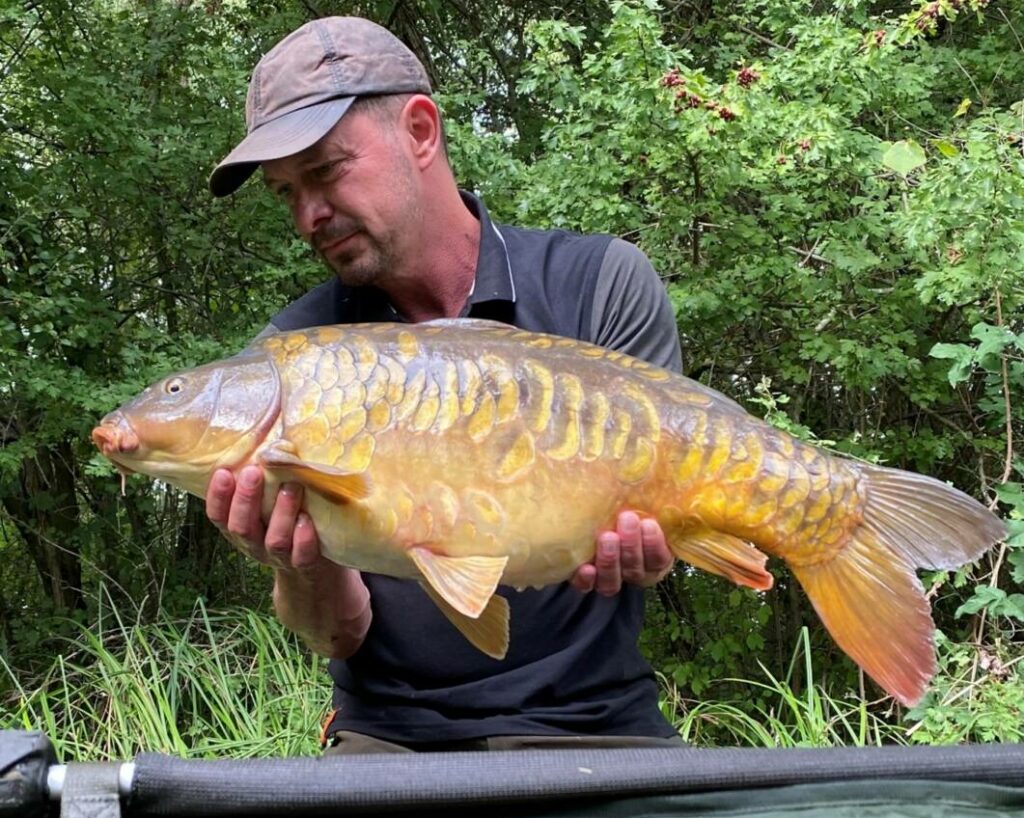 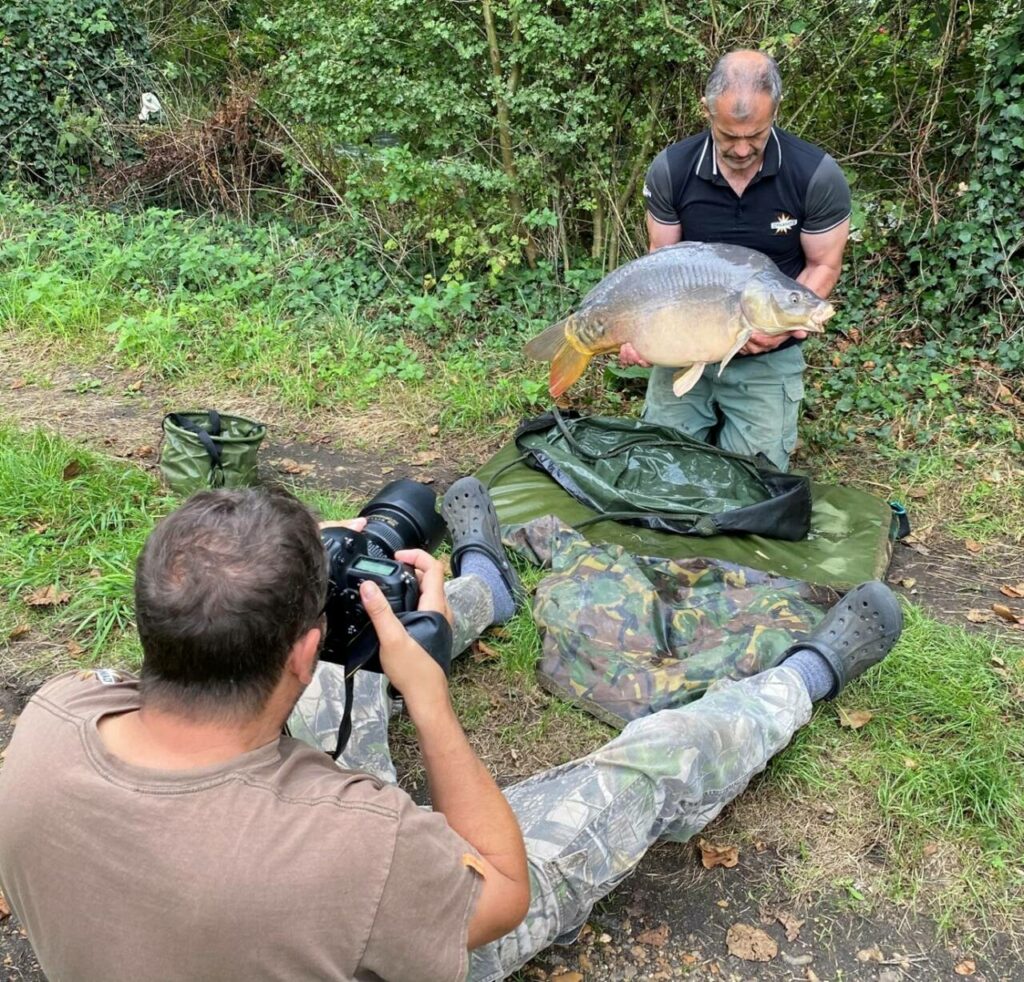 As the week rattled on a few things became clear. Firstly, the time of day when it is apparently acceptable to have the first beer will reduce by roughly an hour every day of a French trip. So called “big fish” Thursday should be renamed “breakfast beer” Thursday.

Secondly, Andy Mackie is the worst man ever to have a week long rat infestation as he is terrified of anything with fur. He managed to hook and land a Muskrat one evening which, if you didn’t already know is one of the cutest, least offensive creatures on the planet.

He called the other Andy for help – being a vet, he’s well suited for the task. As the nimble fingered vet did his work with forceps and freed the beast, Mackie leapt onto his bed chair and said “ watch out, they will charge at you!”. 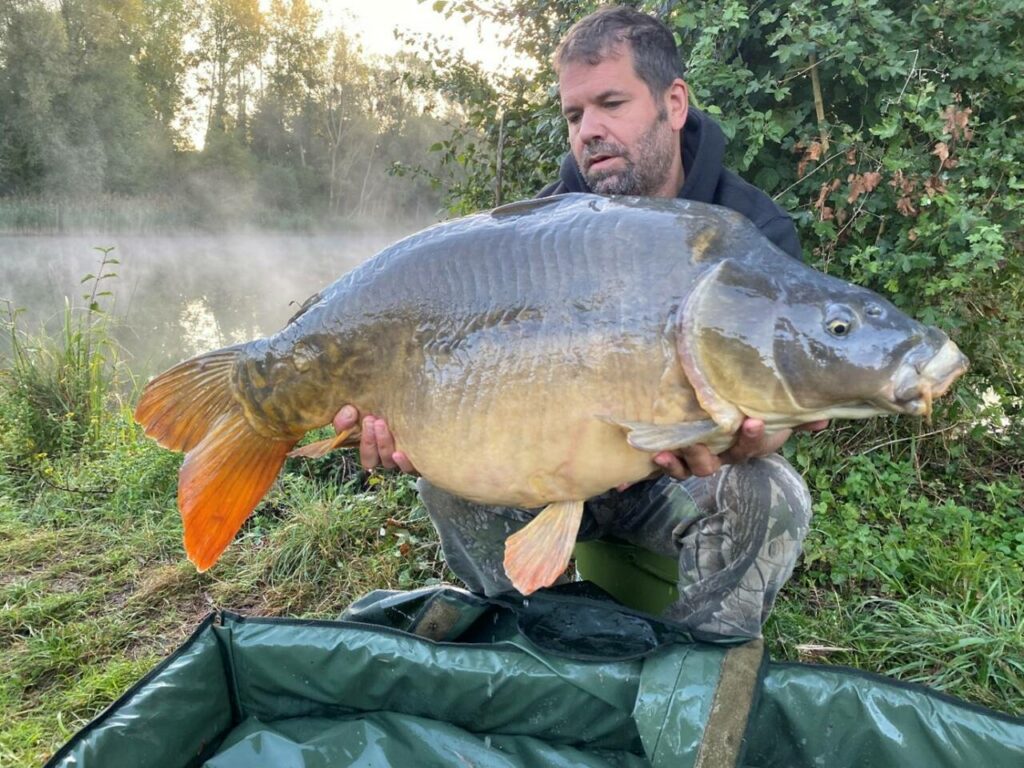 Andy Mackie took time off from being harassed by wildlife to land a few whackers. 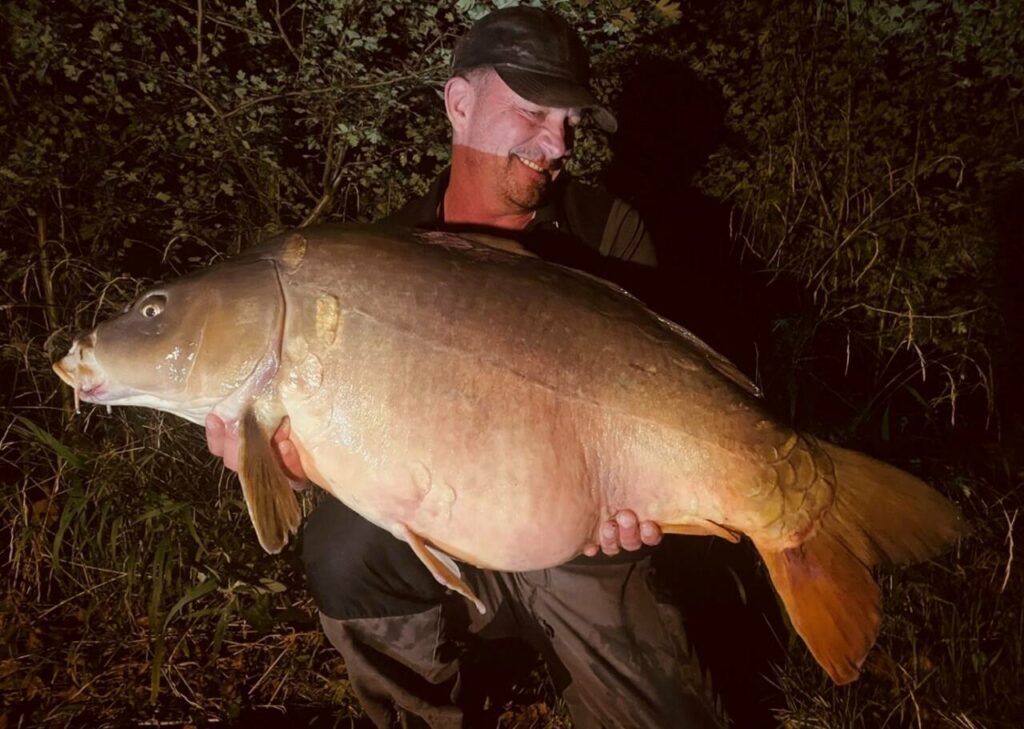 Some of the fights were incredible, topped off by a common the length of a bus that hugged the bottom and just didn’t know when to give up for a full twenty minutes. Such a character, ounces under 40 with white tips to it’s tail. 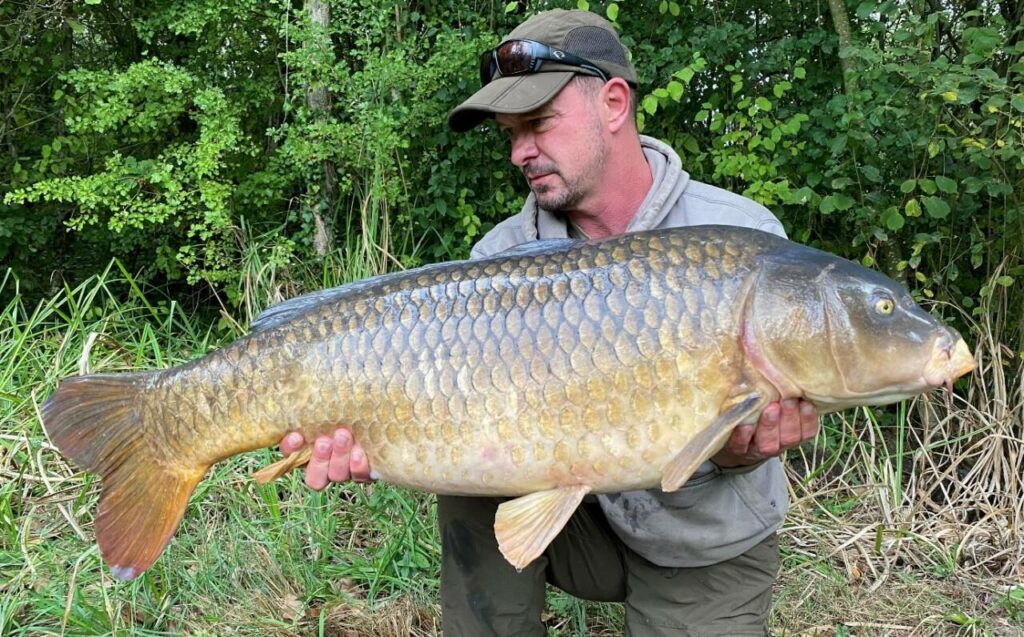 The length of a bus! 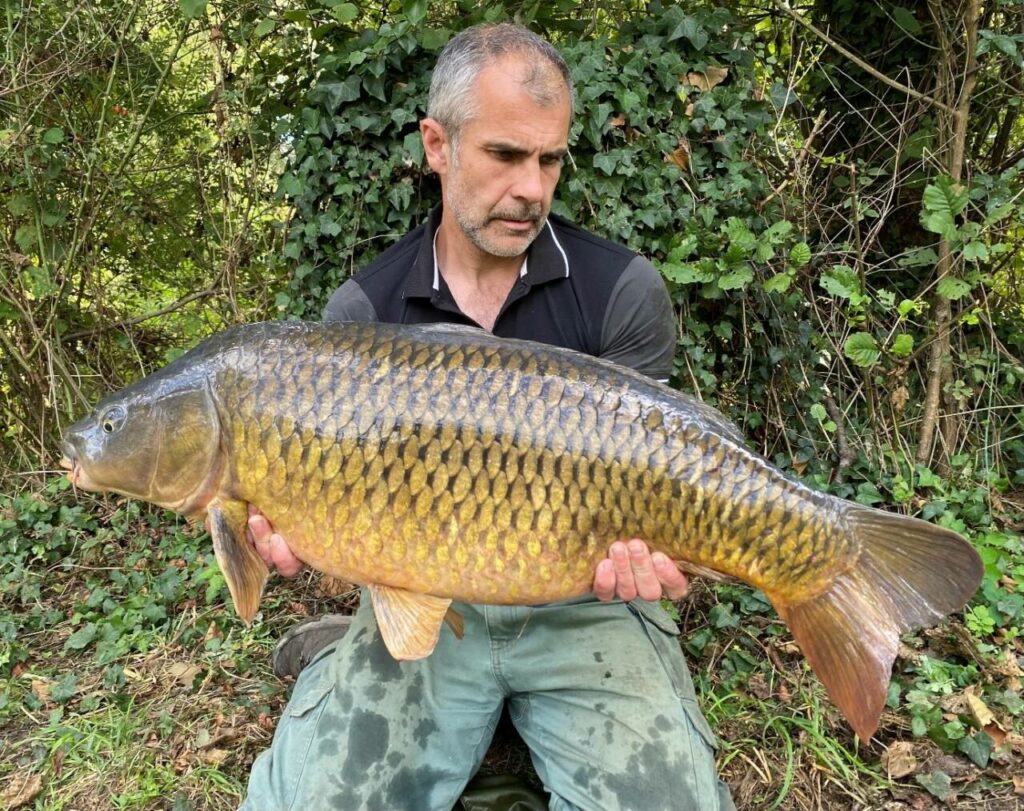 We kept putting the CompleX-T in and kept getting results, especially on disced baits which settle brilliantly on softer bottoms and really push out the attractors.

We landed a good percentage of the stock that week, with a number of recaptures including one particular forty pounder that was good enough to let all three of us catch it! The fish we saw in the snags became familiar as well and, whilst we didn’t catch them all, we had enough to know that it would be our only trip to the venue. The area of Northern France we were in looks like a splattering of blue dots on the map, with untold gems to be discovered. 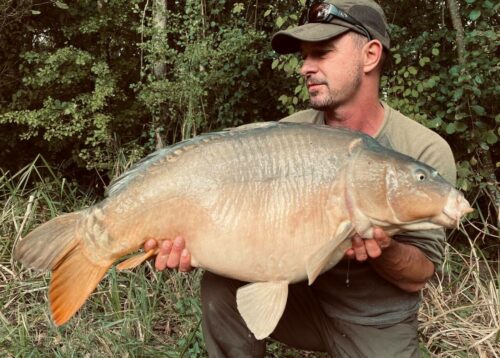 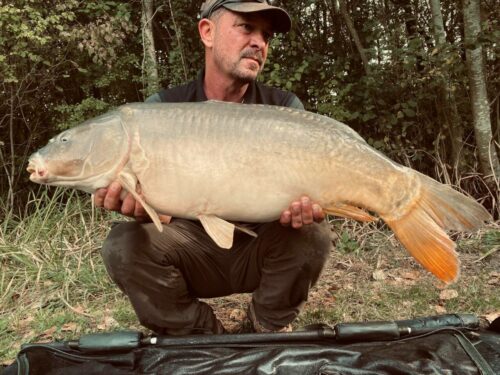 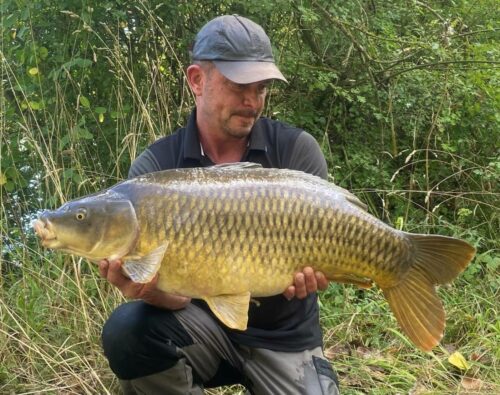 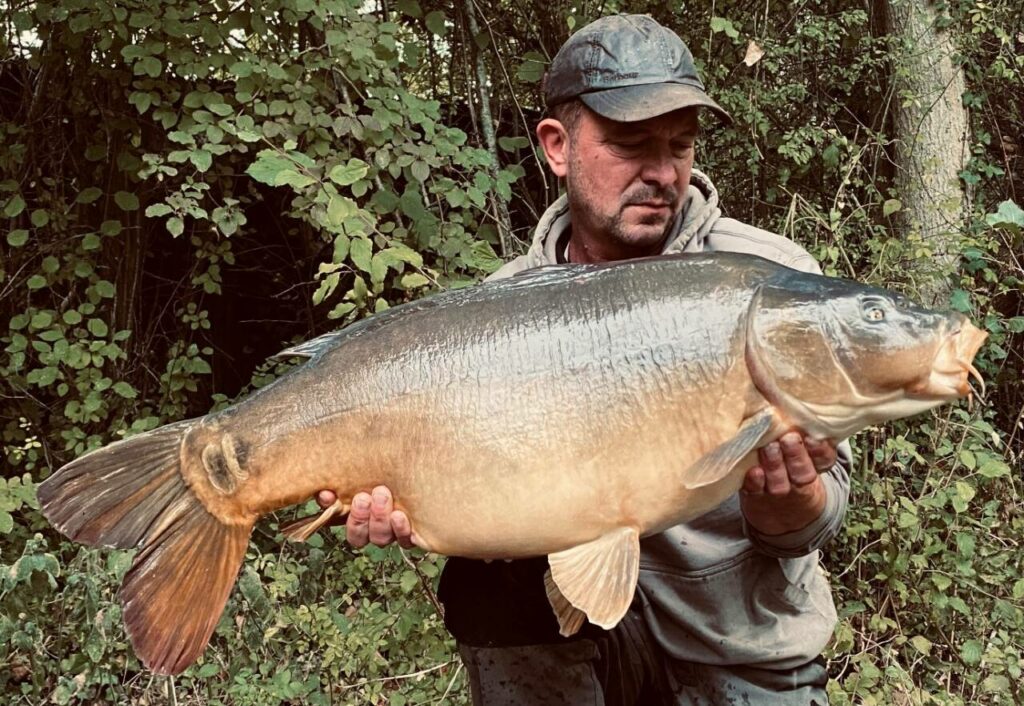 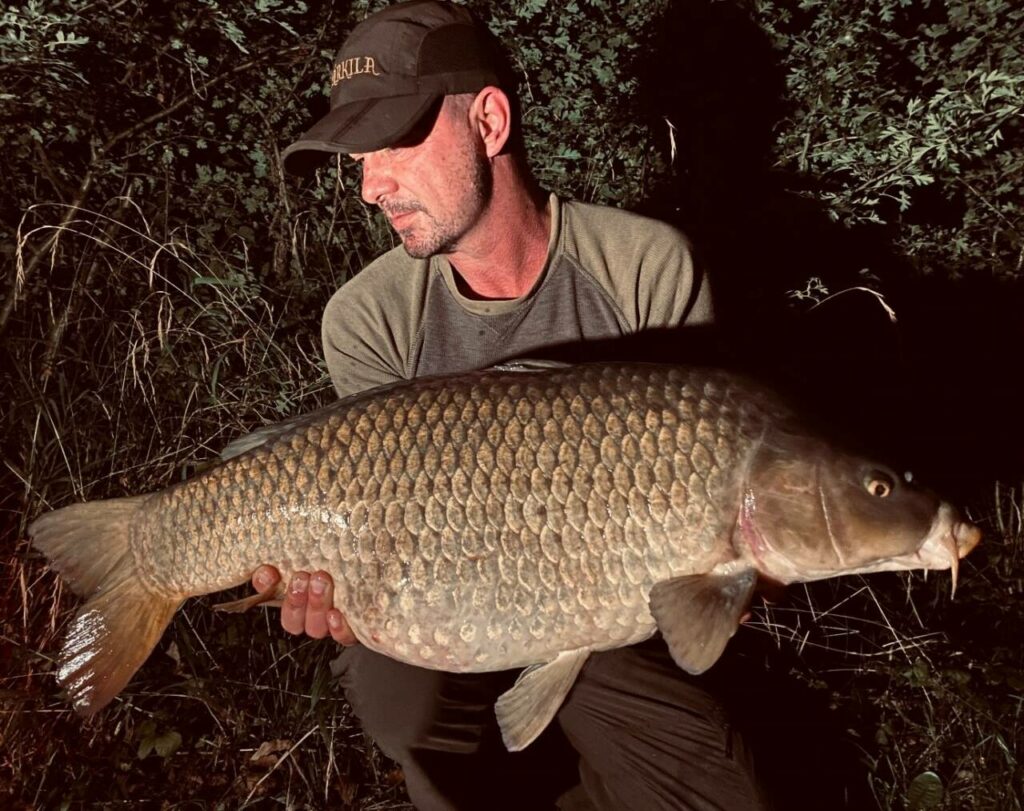 Great fish and great memories. Thanks again to Dynamite for their continued support. We are already doing the research to try and find somewhere a little different for the next adventure.

Looking to book a French Carp Fishing trip but don’t know where to start? Try here.