A week on from Alex’s emphatic victory in the Golden Rod Final, the man himself takes us through the approach that helped him pocket the £5,000 winner’s cheque… 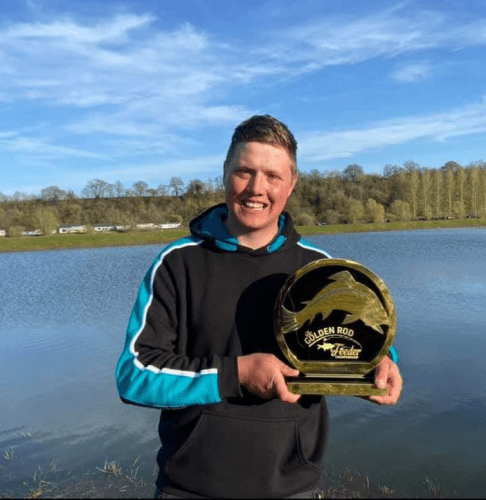 Well, I’ve just got back from the golden rod final at Larford lakes and what a fantastic weekend it’s been!

On the first day I drew Golden Rod peg 13 on the Specimen Lake, which is roughly around peg 26/28 at a guess? On this lake you’re fishing for the odd large carp and then topping your weight up with the skimmers that make up a lot of the catches on this lake. With the event being feeder only tactics were relatively simple.

To begin with I’ve under armed the feeder short hoping for an early carp using a 7mm orange Wowser on the bayonet matched with 2mm fishery pellets soaked with F1 Pellet Soak with a helping of the F1 Pellet Syrup to ensure I always use bait on the feeder throughout the 20 minute cast. Unfortunately, the bite didn’t come and with only one carp caught in the section it was time to get my head down on the skimmers. So fed the 15m line with a mixture of SwimStim black groundbait, a few micros and an odd dead maggot. Before throwing long using the same tactics as the short line to give it time to settle. After around half an hour I was on my 15m line and the general plan was to just keep putting fish in the net until the last hour and go from there. Alternating between a method style feeder and a tradition cage with a mixture of micros and black SwimStim I managed to plod along steadily.

Then with an hour to go I’ve fed the short 6m line with some corn and left it alone until the last 20 minutes when I had a look for a carp again same tactics as earlier with an orange 7mm Wowser on the hair to contrast against the corn. Luckily with 5 minutes to go I’ve snared a proper’un a cracking fish of around 15lb and I’ve managed 38lb 11oz for a section win. The carp was massively important as there was a 36lb from Adam Wakelin and I think 3 other 30lb-plus weights.

Now the weights on this lake had been fantastic with Steve Ringer winning the first day from peg 1 with 202lb. So a positive approach was needed. A short line to kick off with that produced an F1 and 3 skimmers again using micros mixed the same as the first day, but this time with a 5mm F1 Wowser on the hair to catch both the carp and the F1’s

After those few fish short I was going nowhere fast so a change to fishing across to the far bank. Which luckily produced 8 carp on the method. I’ve had to chop and change to keep bites coming with a few on the faithful 5mm F1 Wowser but also a 6mm robin red pellet was brilliant at times- sometimes a heavier more stable hookbait can be the best way to tempt them wary carp as it ensures your bait sits over the feed.

I’ve decided to persevere across to the far bank catching an odd carp and F1 to get to around 50lb with 2.5 hours to go. At this point I’ve fed the edges as I felt I was behind those around me and needed to push the peg a bit. Bait up feeders loaded with the ever faithful green SwimStim and Marine Halibut and just a few micros were my choice for the day. After another throw across there was some activity in the edges so a quick throw saw me catching F1’s steadily and ticking away nicely. Until I looked to my left and saw the famous Larford carp had arrived in the shallower water.

At this point that’s where I spent the rest of my match catching several of the lakes larger residents on a method with the same mix around the feeder as I had initially fed the swim with. 2 dead maggots completed the set up.

At the all out I’ve managed to put 190lb on the scales which was enough for the match and section win. This put me on 2 points and has luckily been enough to win the event overall against some fantastic anglers with Andy Power in 2nd and George Parker in 3rd. It’s fantastic to get my name on the trophy and I’m over the moon to do it in such great company in an event such as this.

Before I sign off just a quick thank you to Phil Briscoe, Julian and the team at Larford for running the event and looking after us throughout the event. I’ll be doing my best to get there again!