Specimen hunter Tony Gibson recently enjoyed an incredible bream session where he banked 17 double-figure fish topped by a 15lb 13oz giant. Below, Tony shares the baits, tactics and rigs behind what’s proven to be one of best hauls of specimen bream so far this year… 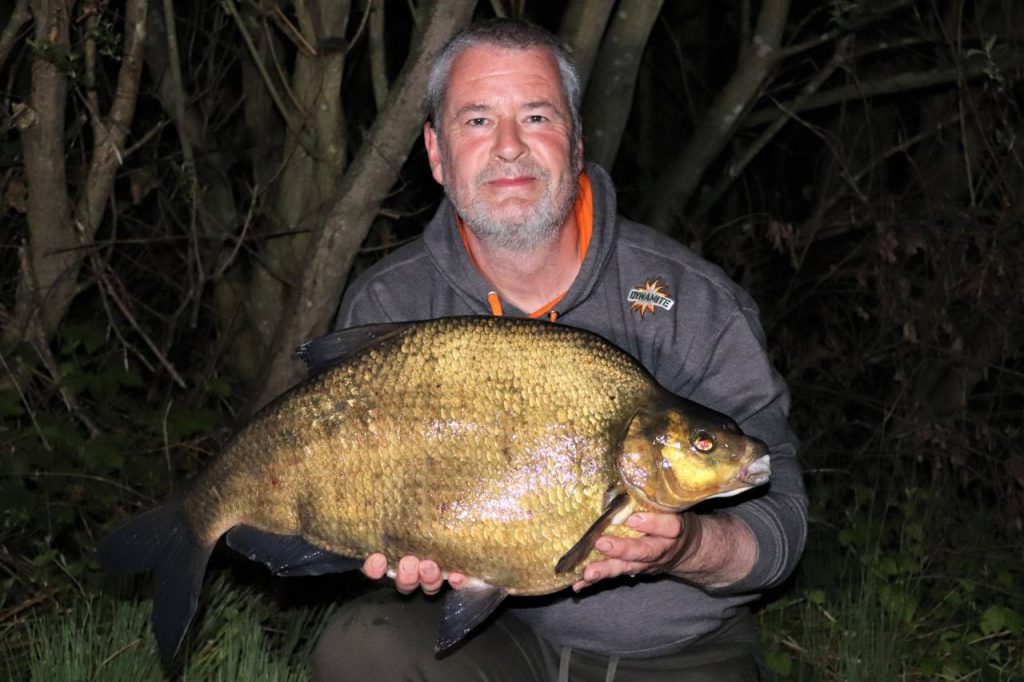 After enjoying a big tench catch around 2 weeks ago I decided that I’d leave the tench fishing for another week or two and have a proper session for some decent bream, as several evening sessions on a different venue hadn’t produced any bream at all and I fancied trying somewhere new. I’d heard that this particular pit had been producing a few double-figure bream each year, mostly to the carp anglers and that the largest last year was rumoured to be around high 14’s, though getting solid information backed by photos proved difficult. With the potential for some bonus carp that ran to around mid-thirties it sounded interesting enough and with the possibility of a mid-week session I decided to go for it.

The venue was a decent sized Cambs gravel pit. A different venue to the recent tench catch that I had two weeks ago. Another weedy pit and I feel the key to the result was taking time to discover a nice clear area that looked like a natural feeding spot (about 60 yards from the bank) and making the effort to keep plenty of bait in the swim to keep the fish interested.

For the first night of the 3-night session I started off with all three hookbaits concentrated on the one clear spot. However, the following morning I moved the left-hand rod off the spot and swapped it for a zig cast well away from the other rods, as I felt I was getting sufficient action on the other two rods and having all three on the spot was a bit crowded (and the zig rod gave me a chance of bonus carp if they spent time in the upper layers).

I baited the main spot (via a clipped up Spomb) twice each day, around mid-morning and late afternoon, with about half a bucket of spod mix.

Each spod mix consisted of a variety of Dynamite pellets (6mm CompleX-T, 2mm Swim Stim Betaine Green, Swim Stim Red Krill and F1 Sweet and 3mm Halibut), a tin of Dynamite Sweet & Milky Pulses and Particles, 12mm CompleX-T whole, and chopped/crumbed boilies, a tin of Dynamite sweetcorn, a good dose of both the Dynamite Liquid Worm Carp Food and the Sweet Tiger Liquid followed by a good sprinkle of the Dynamite Worm Meal groundbait stirred in before the lot was spodded out.

Over the duration of the session I used 5k of boilie, 15k of pellet, 1.5k of groundbait, 12 tins of particle and 2 litres of liquid food to keep the fish visiting the spot.

It was the two rods on the spot that produced all the action, apart from one of the 10lb bream which surprisingly fell to the zig rod one night (my first ever bream on a zig). Both rods on the spot were baited with a standard 12mm CompleX-T boilie straight out of the bag, tipped with a piece of Enterprise flavoured plastic corn. One rod was tipped with yellow Green-lipped mussel flavoured corn, the other with pink candyfloss flavoured corn. The bream seemed to favour the hookbait tipped with the yellow/GLM plastic, while all 4 carp fell to the pink/candyfloss corn tipped hookbait.

The first run came late morning on the first day, less than an hour after getting the rods out and the initial baiting up done, producing a 31lb 3oz common. 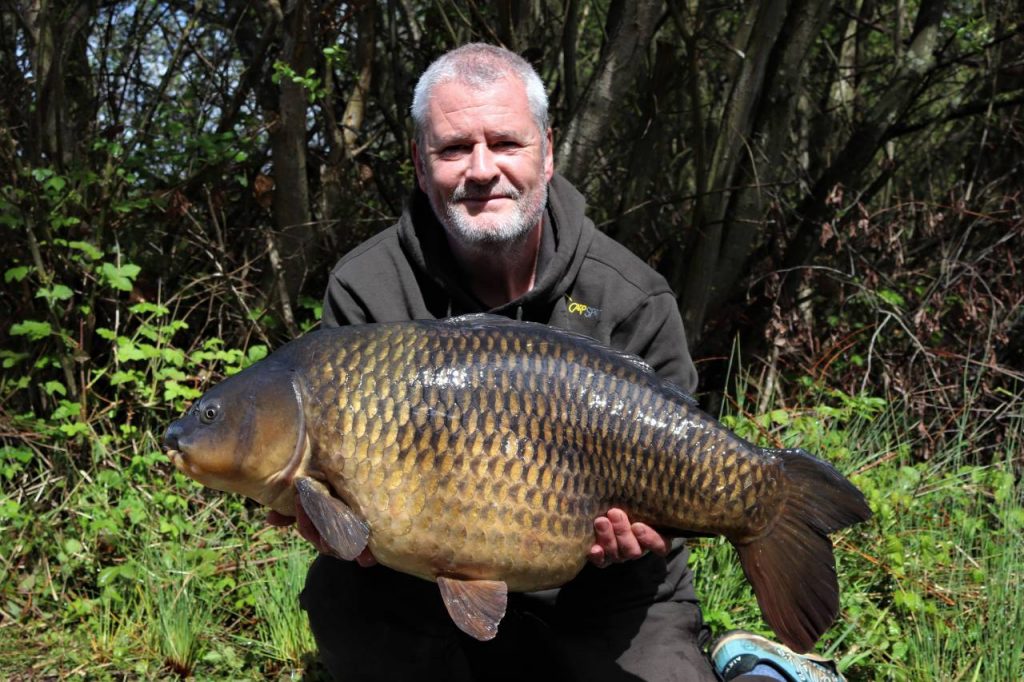 No more action was forthcoming until gone midnight on the first night, when a 13lb 13oz bream signalled the start of the hoped for bream action. After that, most of the action over the 3-night session came during the hours of darkness, or early morning, but I did catch a few bream at odd times during the day. 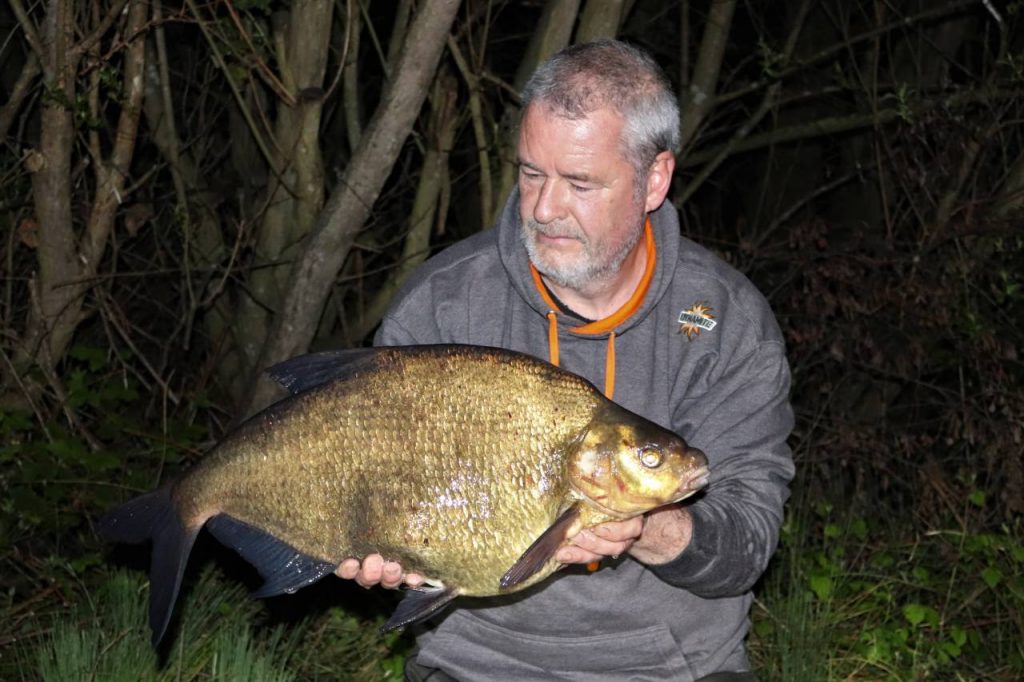 The final bream total consisted of 17 ‘doubles’ and a handful of 9’s. The breakdown of doubles were: 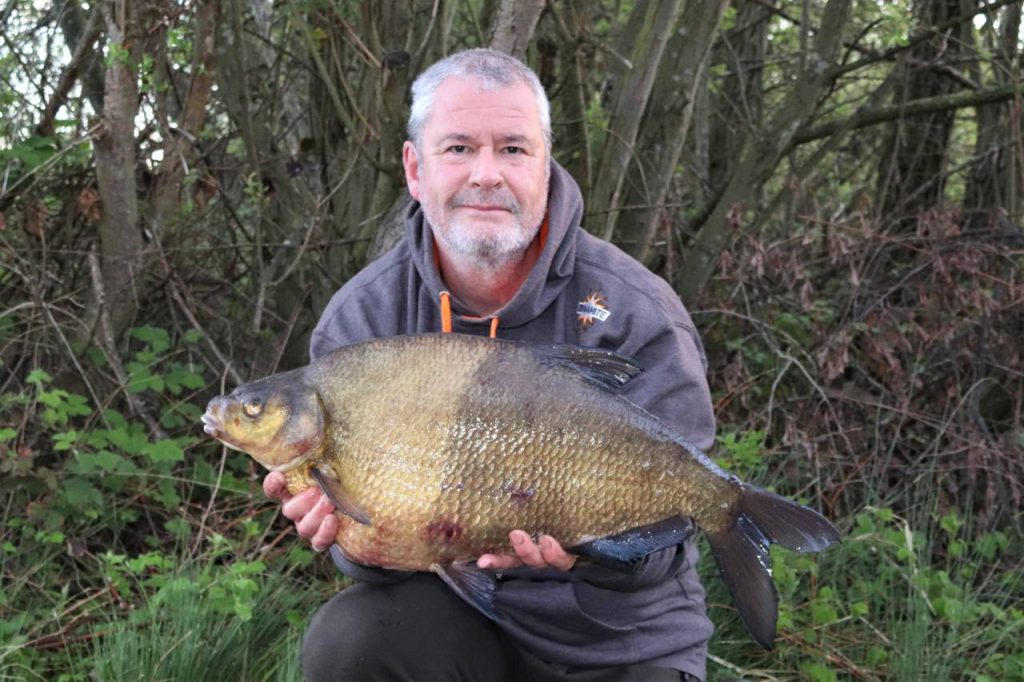 This 12lb 5oz two-tone specimen got in on the feeding frenzy too.

The largest bream of the trip proved to be this 15lb 13oz specimen. 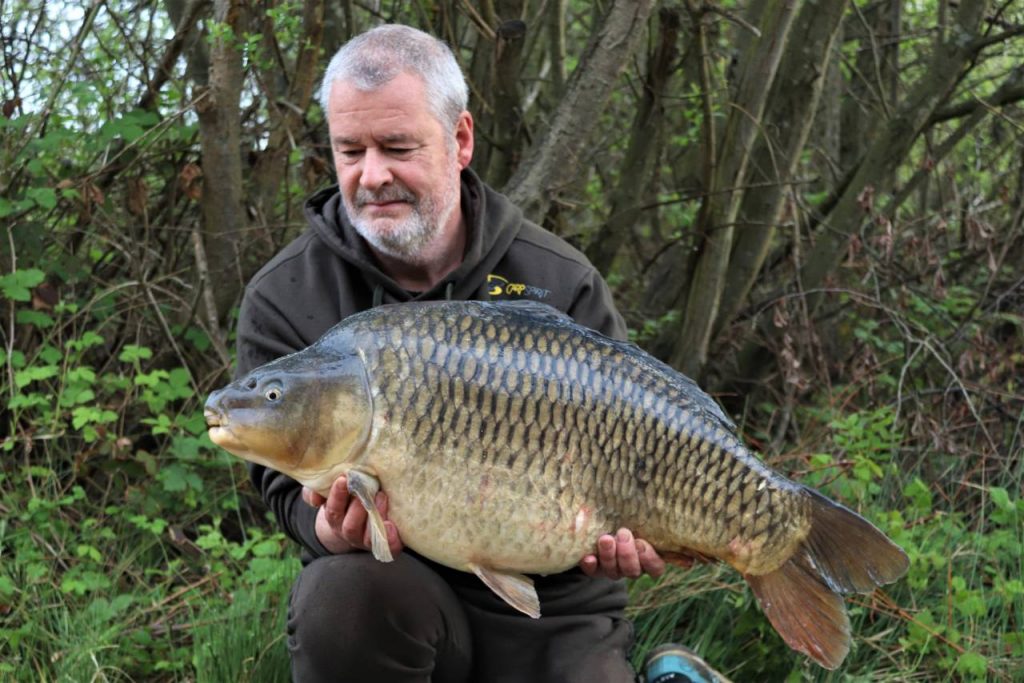 Another large common fell to Tony’s bream offerings. This one went 30lb on the nose.

8 inches of 20lb “Combi-soft” with the last half-inch of coating by the hook peeled off, tied knotless-knot to a size 7 Carp Spirit Medium Curve Shank hook, with a small piece of rig tubing on the hook trapping the short hair down close to the point of the hook helping it to flip over and achieve a good hold just behind the lip area.