Improve your match fishing skills with match  ace Ben Fisk’s latest article on why you should use hard pellets on commercial match fisheries.. 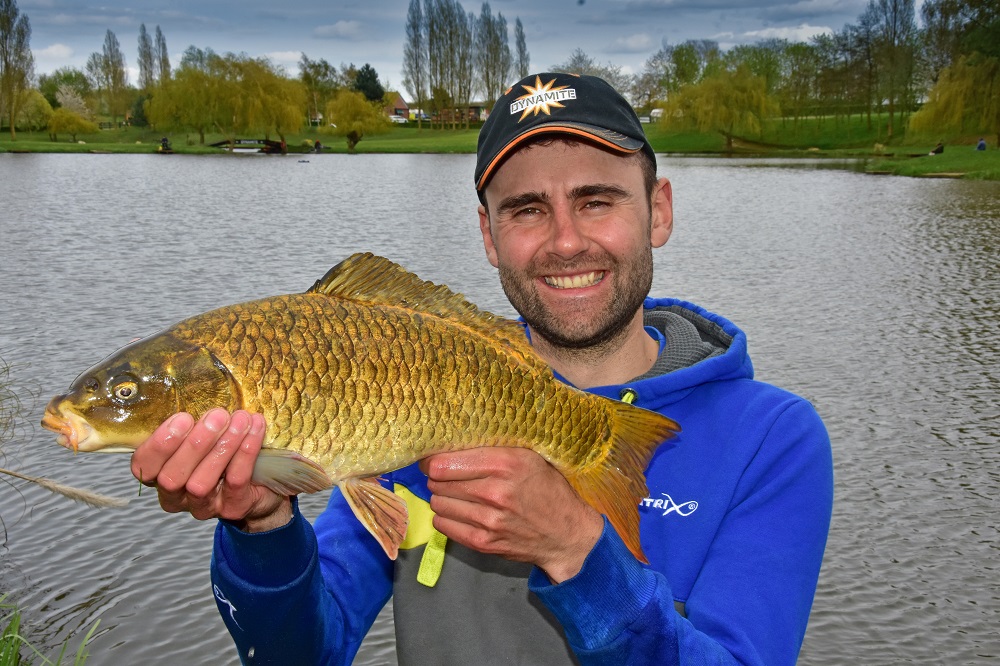 Soft pellets catch a huge amount of fish but come the warmer months match ace Ben Fisk reckons you’re better off being more of a hard man, particularly where your pellet choice is concerned. Between the months of March and October there can be no finer bait for catching numbers of carp than hard pellets.  It’s a very positive, selective way of fishing, where softer baits often result in unwanted attention from smaller fish. But get your approach slightly wrong and you’ll spend the day foul-hooking and generally tearing your hair out with hard pellets! This is a bait you need to be careful with, as I’ll go on to explain! 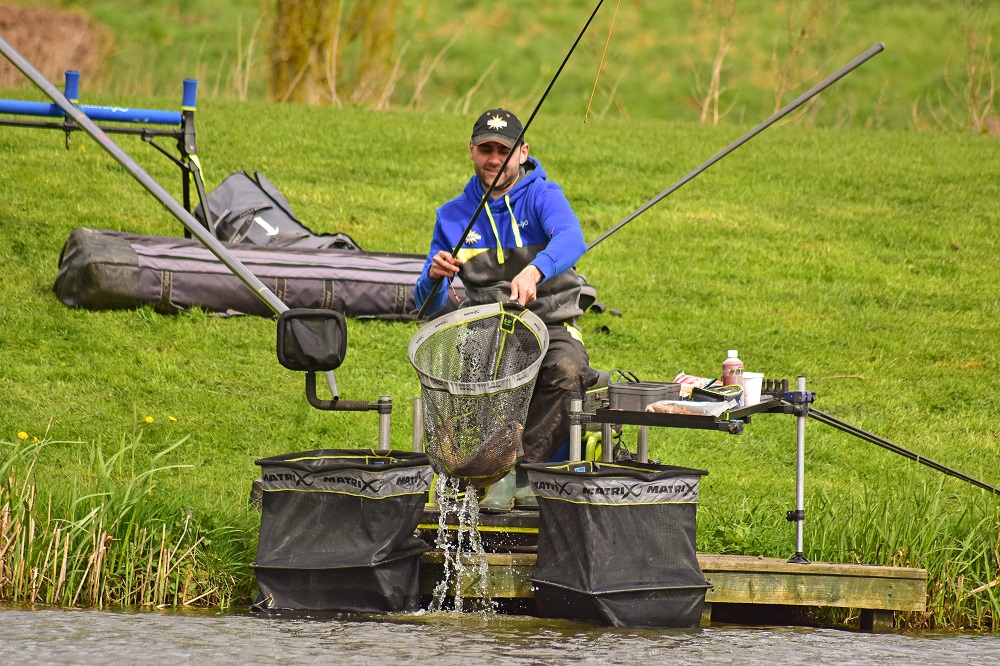 Hard pellets are a great weapon for catching lumps in summer

Hard pellets can be mounted with either a band or a lasso knot. Unless I’m fishing for a large amount of smaller fish then 99 per cent of the time I choose a band, as it’s so much easier to use. When fishing on the bottom I like to have the pellet touching the hook, because you need to react to bites immediately as fish are not hooking themselves, and it means less foul hookers too. Although, up-in-the-water or on the bomb or feeder it’s a different story and you want a small gap on the hair between the pellet and the hook.

Fishing hard pellets on the bottom I actually prefer to use a spade end hook tied conventionally, so I can hook a micro bait band like you would a maggot. I prefer this to a knotless knot and an eyed hook because a hook tied on a spade has a straight pull upwards when you strike, resulting in much cleaner hook holds in the top lip and not around the side of the mouth, or on the outside. With a knotless knot there’s a much more aggressive hooking angle, which is kinked, which is great for self-hooking methods.
Hooking the band also means the pellet is always tight to the hook as I mentioned previously, plus if you want to change and try an expander or another bait on the same rig you can simply pull the band off. You’d think that a band would keep coming off but it doesn’t and I’ve only found myself putting a new band on a couple of times a session. 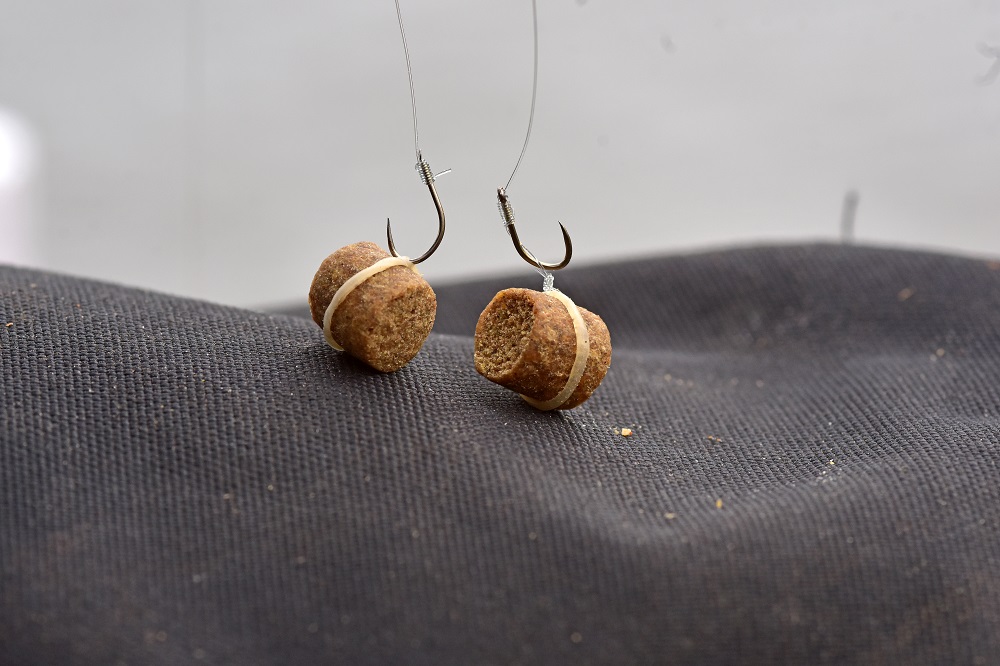 Feeding is probably the single most important part of pellet fishing and it took me a while to get my head around it. It’s incredible how little you can get away with, even in the summer time, and quite often it’s a real case of less is more.  Too many pellets in the peg invariably means fish ripping up the bottom, false indications and foul hookers. Sometimes it pays to tap a few pellets in and sit there patiently waiting for a bite, something I do a lot at places such as Bolingey in the White Acres festivals. Even with regular weights of around 150lb-200lb of proper fish here, feeding just five pellets seems the way to go. Attract one fish into the peg at a time and make sure that when it arrives you catch it and don’t foul hook it. 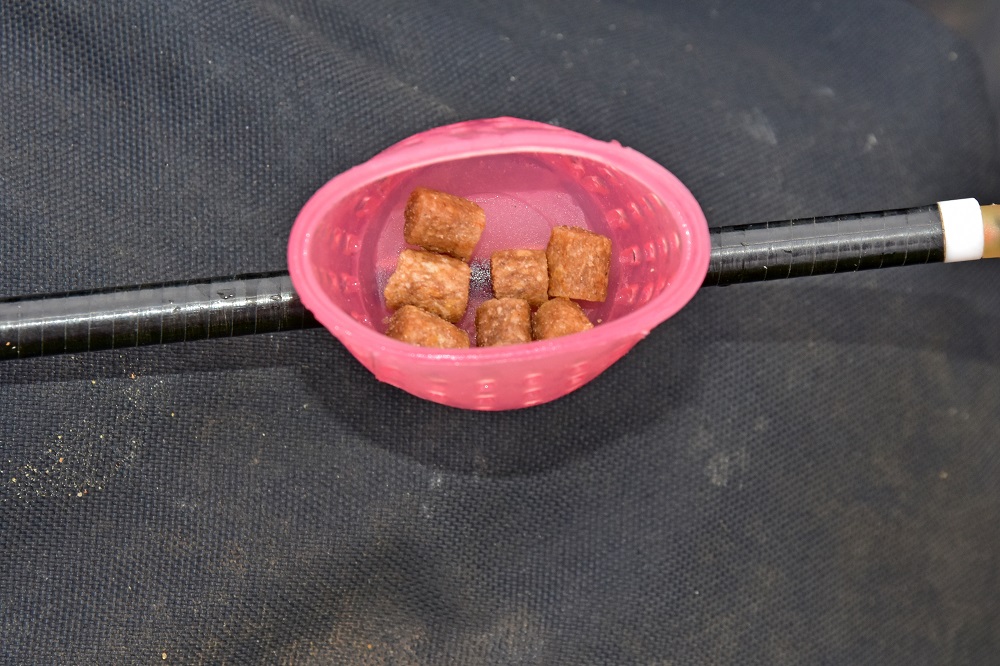 This kind of feeding seems to work on short pole lines all over the place too. Whether or not to pick your catapult up is also a question you should ask yourself. Generally, I only like to do this when fishing long in open water, when the aim is to draw fish in from a bigger area and there’s a chance of a few fish on a shallow rig over the top too, or when I’m on a lot of feeding fish. There are no hard and fast rules however and a lot of the time it’s a case of working it out for yourself as you go, as a recent session at the fantastic Dynamite Hayfield Lakes proved.
I sat on a corner peg at the top of Adams Lake with a long margin banking to fish up to. This isn’t a venue I know that well and I expected it might take a bit of time for the carp to come into the swim here, so I fed about 30 or so pellets by cup and left it to settle while I set the rest of my stuff up. However, when I started fishing a short while later it became evident that fish were already present in the corner as I had a few indications and a bow wave out of the peg, which made me regret putting that bait in! I eventually caught one, then I could start again, feeding for one fish with a Toss pot style cup on my top section. 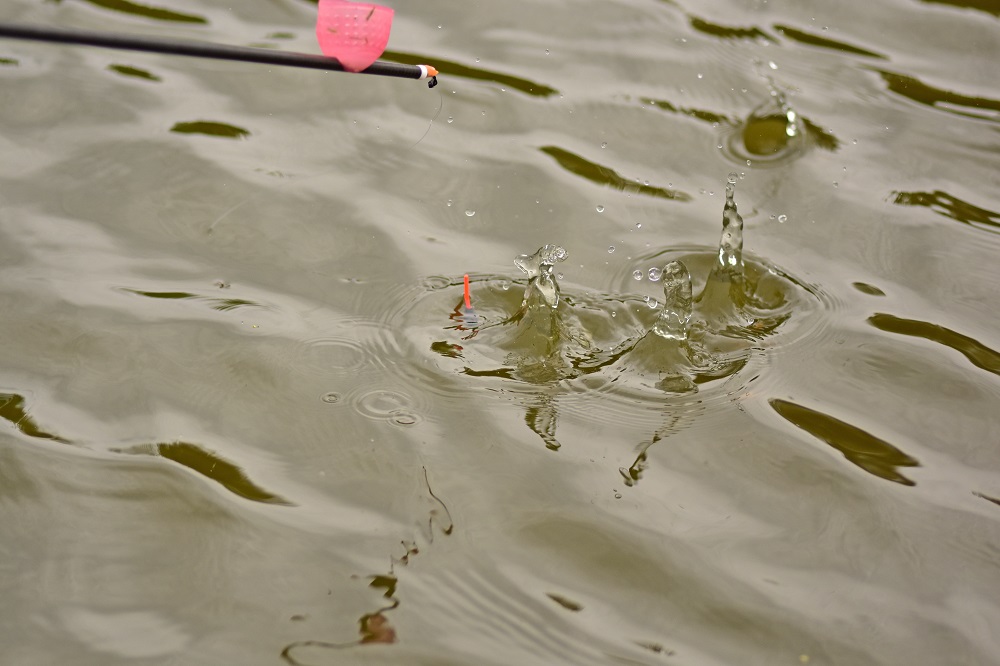 Accurate baiting is essential. Tap around six or seven pellets from a height to make a noise and attract the fish

Laying the rig up a shelf like this I like to tap the pellets in a few inches down the shelf of the spot I plumbed up. This means fish coming up the shelf from the deeper water find the feed pellets first with the hook pellet above them, meaning less chance of a foul hooker. I like to drop the pellets in from a height because carp are fully cottoned on to the noise of pellets entering the water.
On the day I also experimented with a catapult, flicking in just three pellets at a time to try and attract a few fish in. This seemed to provoke a few liners and didn’t feel right with feed spread too far, so I binned it and just focused on tapping in around seven pellets and waiting for the bite, which seemed to sort the peg out. It was by no means solid, especially with the wind hacking down the other end, but the peg was perfect for the kind of fishing I wanted to demonstrate. By being patient, when a fish came in up the long edge I could catch it. 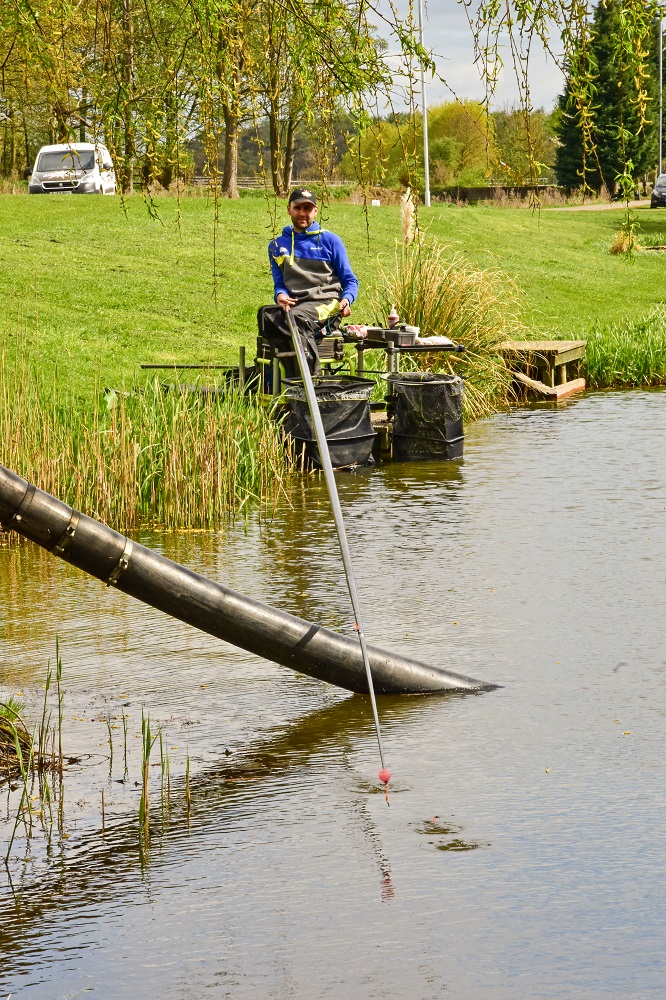 There are two main types of coarse pellets. First, what I’d term as the traditional type which is darker and breaks down fairly quickly in water, the Dynamite Low Oil Carp Pellet. And second the much more modern pellet which is a toffee colour and is a lot denser, sinking quickly and taking a long time to break down, the Swim Stim Original Carp Pellet.
I use both these pellets where I have the choice, although many fisheries such as Hayfield have their own compulsory feed pellets, which are perfectly good too. I prefer to feed the Swim Stim type pellets as these are heavy and stay in place on the bottom, rather than getting wafted around a lot. On the hook however, I choose the faster breakdown, more traditional Carp Pellet, because I think fish prefer to eat these. 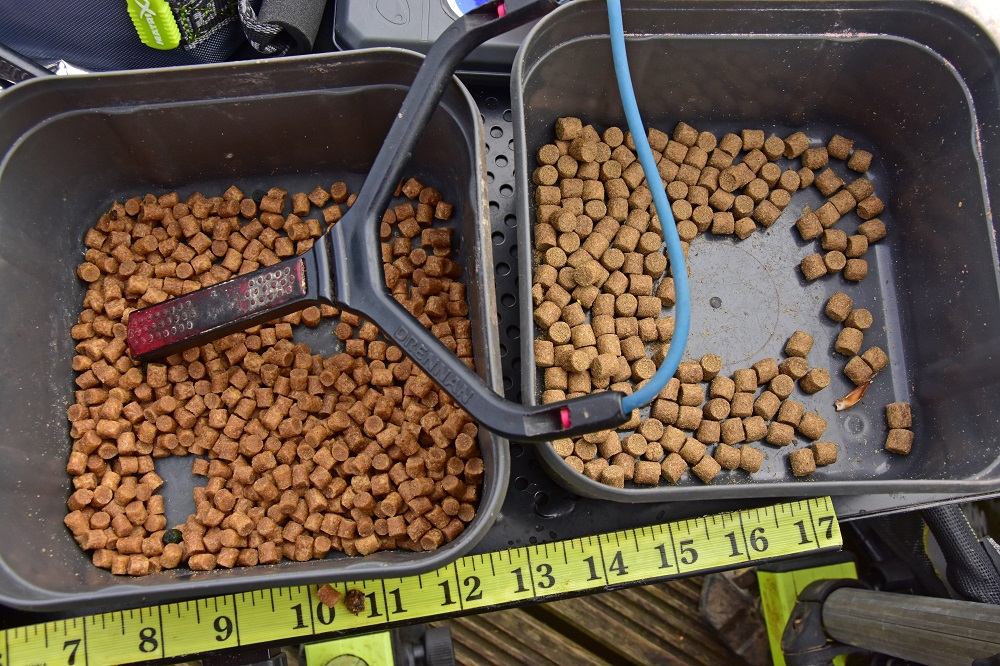 You must be careful with some fishery own pellets as they float, so always throw a few in the edge to check before you start. If this is the case then I’ll add some Dynamite Complex-T liquid to the pellets, or I’ll also do this if I think I need an edge, for example if it’s a heavily-pressurised venue, which sees a lot of the same fishery pellets fed. Complex-T was a massive hit in the big carp world last year, it’s red in colour and has a unique marmite-type smell and a few of the Dynamite coarse team have been using it to great effect. For some reason it seems to select the proper carp in a peg. If I was fishing for F1’s with hard pellets I’d use the much sweeter SwimStim F1 liquid Pellet Soak. 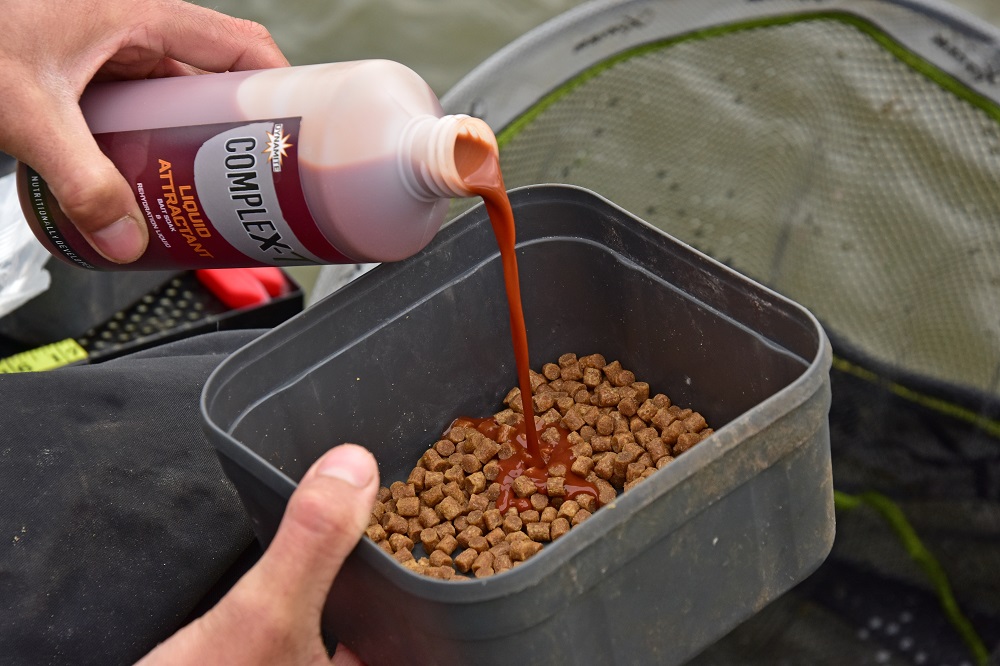 The best float for this game is a thick bristled one which is fished dotted down. I’ll use at least a 2mm hollow tip and in shallow water like this then a Malman Roob or an RW Carp Dink is my choice. Fish can suck in and spit out a pellet very quickly so its important to see that as soon as possible. However, you don’t want to be striking at every brush of a fish on the line, which can happen with a thinner bristle. Also, a dotted down float is much more stable one than one with a full bristle showing!
Both these float patterns have slim bodies and wire stems, which is fine for shallow water. On the long pole in open water however, I prefer something identical but with a rugby ball body, which just sits better in any skim.
My hooks are size 16 or 18 Matrix Carp Baggers. I find the size 18 most effective with 6mm pellets because a smaller hook is much less conspicuous when the whole of it is exposed. I stepped up to the size 16 today however, because of the presence of a few snags in the corner such as a pump in the water. It gave me a bit of extra security when putting pressure on and it also suited the 8mm hookbait I ended up catching on. 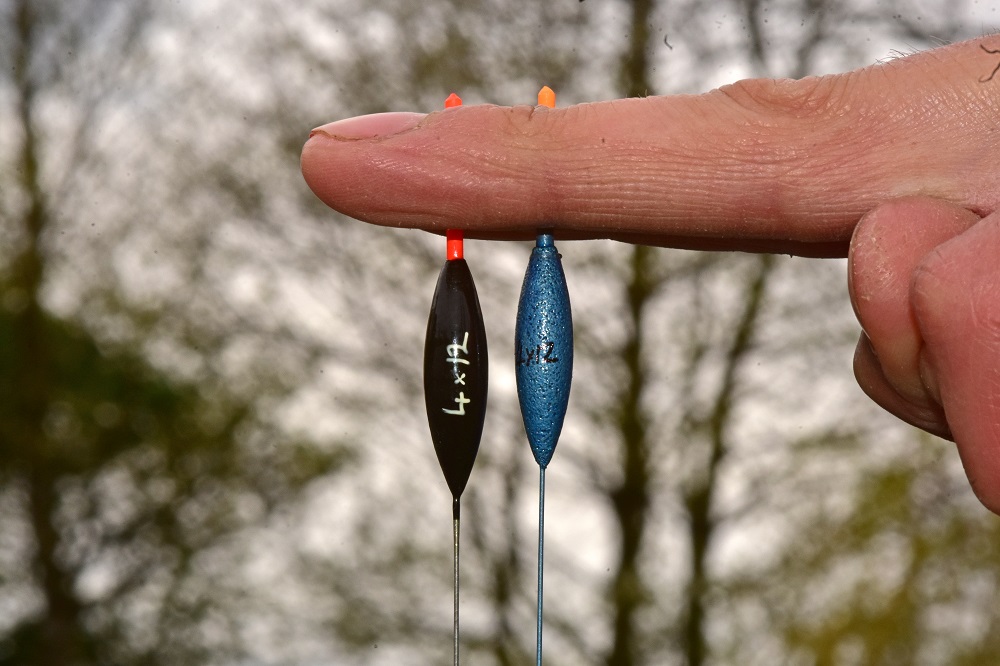 Finally, a word on shotting. There’s really no need to use anything other than a slightly strung bulk in water of five-feet deep or less, the deeper it is then the more strung that bulk should be. I use a six-inch hooklength of 0.16mm or 0.18mm Matrix Power Micron, with the first shot a few inches above this. I don’t like to have shot near the hook when fishing in this way, not only so the pellet can waft down naturally but also to reduce the chance of feeding fish hitting the shot and causing liners.
With F1s its different as you need a shorter four-inch hooklength and a shot right on top of it or you won’t see all your bites!
This may all sound a little complicated at first, but it’s really not and if you employ the tips and tricks I’ve spoken about in your angling, your pellet fishing will improve ten-fold. I guarantee it! 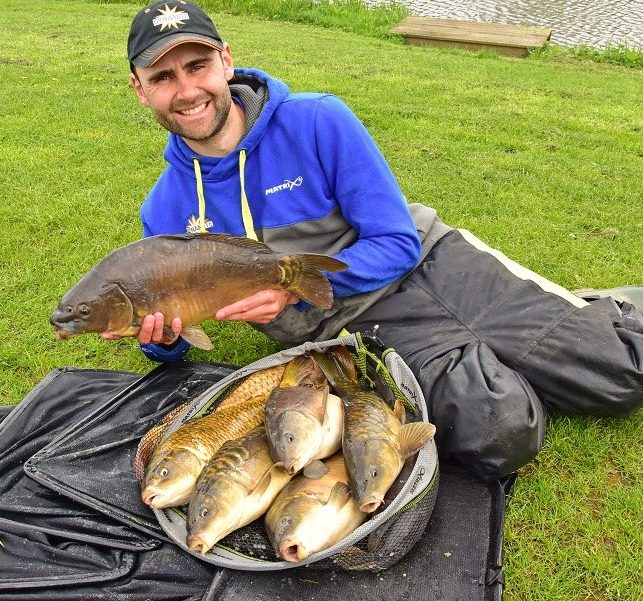 **VIDEO** Fishing shallow on the pole with Ben Fisk

*VIDEO* How to prepare expander pellets