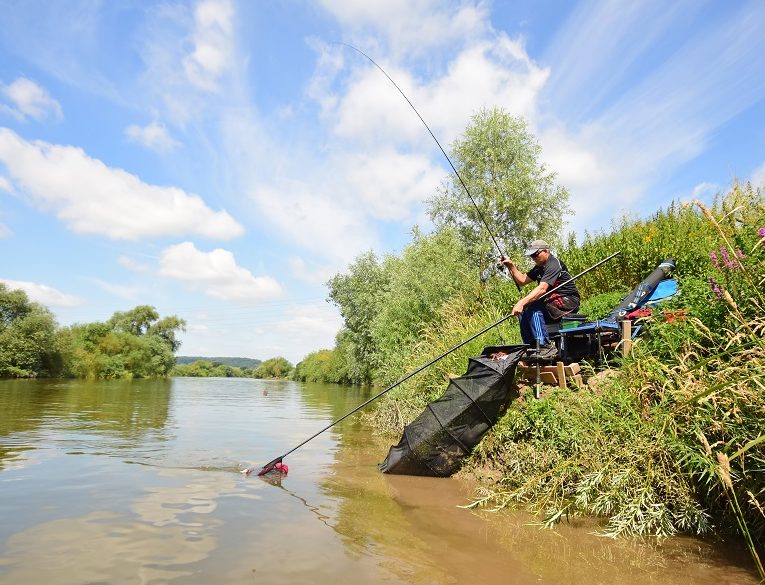 „I’ve always been a local boy, so when it came to fishing I cut my teeth fishing on the tidal Severn,“ Ian said. „Rivers have always been my first love and the Severn in particular. It is one of those rivers that you can fish however you want, depending upon your main discipline and what you’re looking to catch. The river is stuffed full of silverfish, big bream, huge predators and 100’s of carp. It is a match anglers‘ and specimen-hunters‘ dream venue.“ 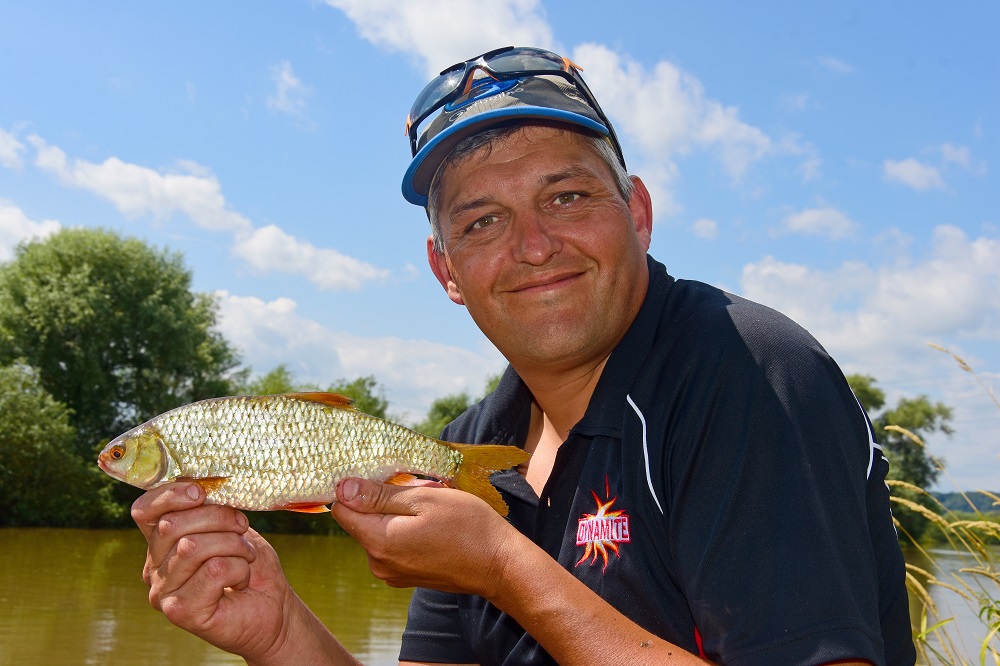 Ian spent the day fishing on the Bankside Tackle-controlled stretch on the Severn, just upstream of the Red Lion pub on Wainlode Lane, Gloucester. This length is renowned for its big bream shoals, head of monster predators – the current British record zander having been caught a few miles upstream – and large carp. Although the Severn has always been known as a barbel river, here on the tidal, there are fewer barbel, but those that are here are usually, in Ian’s words ‚Barney Rubbles‘ (doubles in layman’s terms).
The 41-year-old match ace reckons that along this area there is more chance of catching a carp than a barbel.

„There are 100’s of them along here and for river carp, they are relatively easy to catch too,“ Ian said.
For the more match-oriented angler, the bream shoals have to be seen to be believed. The generally average 5lb to 7lb, with bags close to 100lb being quite common. Although, bream being bream, you need to track down the shoals to get a big weight, but once found, it is as easy as shelling peas as long as you keep the bait going in!

„It is an environment that is changing by the hour,“ Ian explained. „You visit one of the many gravel pits around here and the depth remains the same week in week out, a river that is affected by the tides offers the angler a much larger challenge. It is a place that is constantly evolving and so as an angler you have to embrace this fact, adjusting your approach over the course of the session.“

And, being tidal, you need to be mindful of this fact. There is no need to fear it, but these can be dangerous places if not treated with respect. „When I’m working in the shop, a lot of anglers comment how high off the water the swims have been cut,“ Ian continued. „The reason for this is that that as the tide floods and ebbs, the river’s level rises and falls and here on the Severn, this can happen very quickly. Take today’s session for example. As it was a big tide (9.8m), the river’s come up around four-feet in just under two-hours before it leveled out and started to recede. Most anglers can’t get their heads around this. The fact that within the space of an hour the flow can go from a jogging-paced speed, flowing left to right, to the same speed right to left is difficult to come to terms with, but that’s tidal rivers for you!“ When the river is really flooding (tide coming in), Ian quite often stops fishing for a while as quite often there is so much detritus being carried in the flow, it is too difficult to fish correctly. But, once the river has leveled out, he will start fishing again. 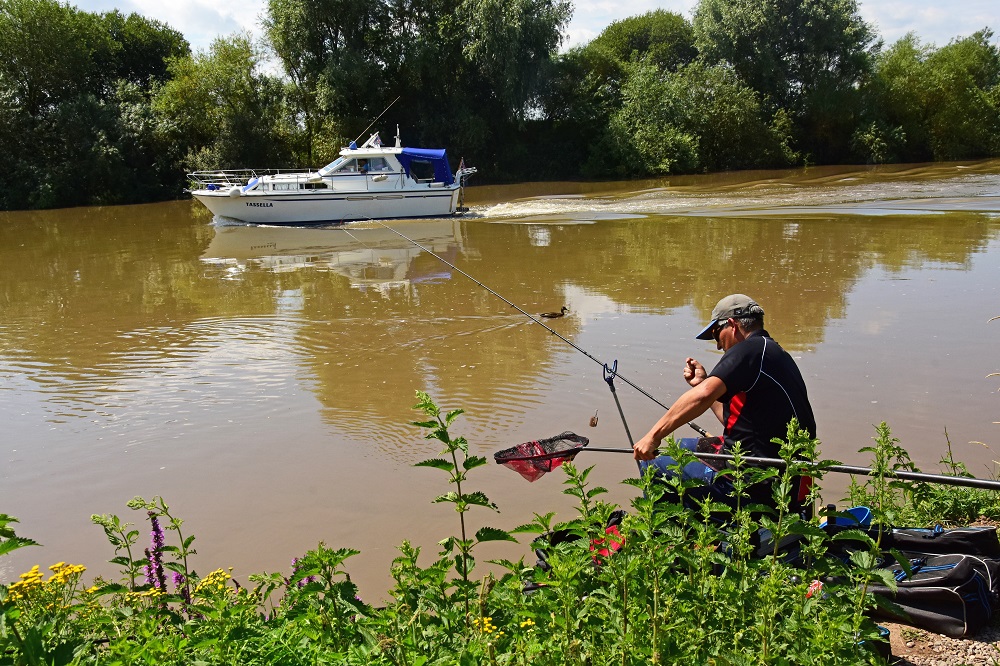 Although the river looks daunting, there is no need to use special stepped up rods. Ian tends to use his typical commercial feeder gear. A one-ounce tip, combined with a 6lb mainline, 0.14mm hooklink and a size 14 hook were as complicated as things got. The only difference was he attached a 25-foot shock leader of 8lb mono, both to take the sting out of the cast and to cope with the extra detritus carried by the river. „The hooklink is a two-and-a-half-foot length of 0.14mm (5lb 2oz) to a size 14 Gamma Power hook with double maggot as the hookbait and I’ve had a bite a chuck,“ Ian explained. „The fish are so unused to seeing anglers, I could have used a size 10 if I’d wanted to! But, you go a few miles upstream to say Evesham and you’d be waiting all month for a bite.“ Regards the all-important feeder, again the myth that you need to cast something with a church roof attached to the base is total nonsense. For most of the day, Ian used a 44g open-ended feeder, as the flow picked up, he swapped over to a 60g version, while at the top of the tide, when the river stood still, he dropped down to a 20g. „There is this crazy perceived idea that you need to use five to eight-ounce feeders on these places,“ Ian continued. „Yes, if you are fishing mid-river for carp of barbel, you’d probably need a five-ounce flat lead, but why make things difficult for yourself? If the river is flowing hard, just fish closer in.“ 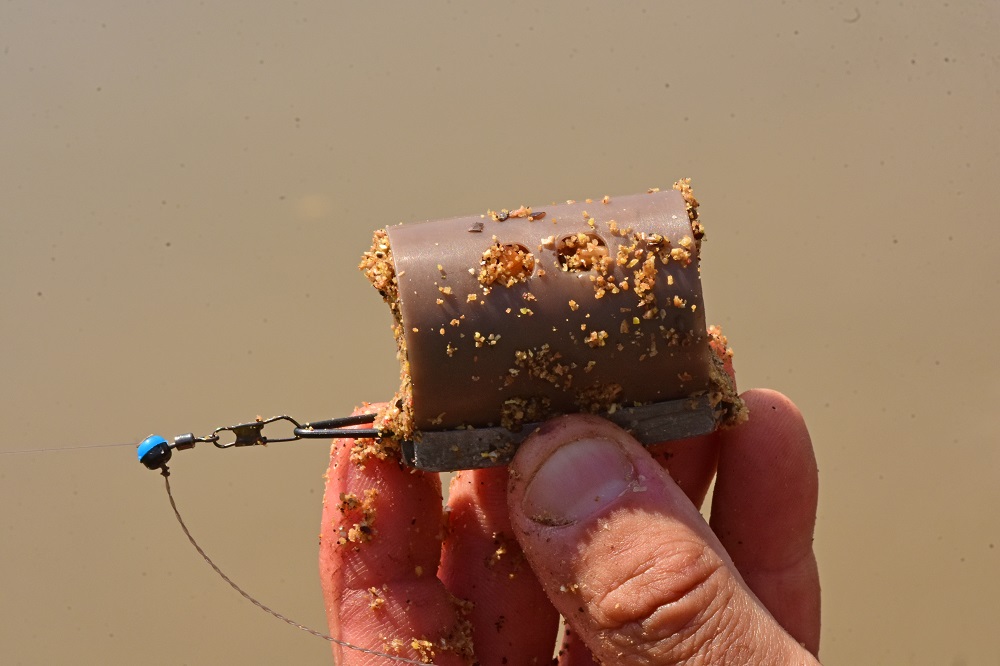 Targeting the river’s silverfish, Ian’s main loosefeed was groundbait. This comprised of a mixture of Silver X Skimmer Mix, Feeder and Bream Original. These were combined in equal parts. Of course, you could fish only one but Ian prefers this combination because he feels that addition of the Bream gives the Skimmer Mix more ‚body‘ and ‚depth‘. The Feeder is added due to it high levels of crushed hemp. 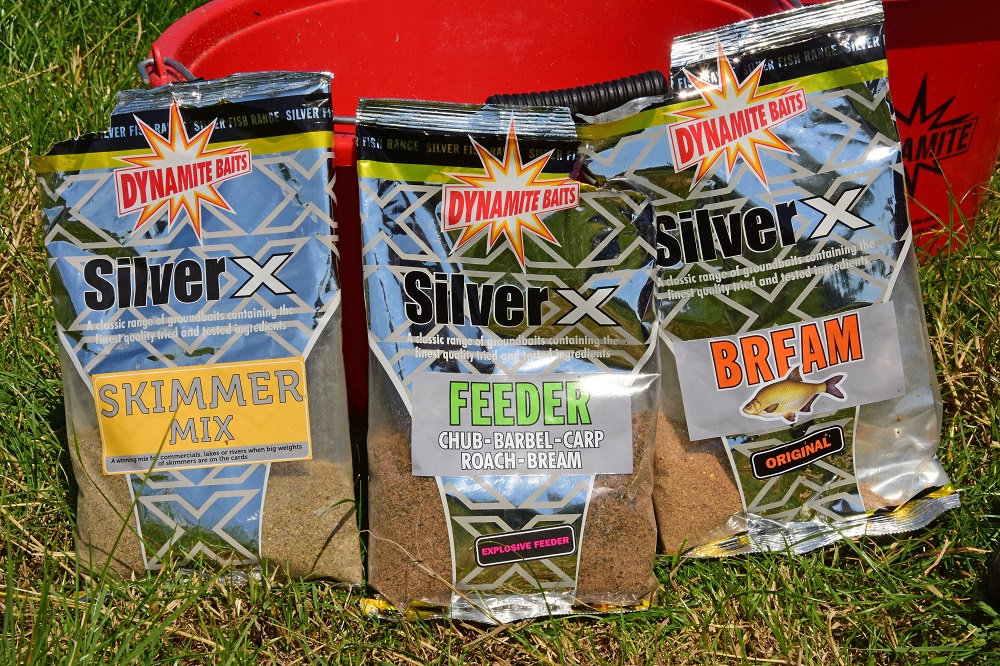 „If you were to target just the bream, if they are not in your swim you risk a dry net, but by adding the Feeder groundbait, it opens up the mix to all the silverfish and the odd specimen too. I just find this combination works very well on the tidal.“ As well as the ground-bait, Ian will sandwich loose-feed every cast. This again will depend upon what he is mostly catching.

After this it is then a case of fishing traditionally. At the start, he feeds six feeders full, before attaching his hook-link and fishing normally. For the first hour, he will look to cast every 90-seconds to get a good bed of feed down, then after this he’ll look to get into a rhythm, dictated by the number of bites. „If you start getting bites after four minutes, don’t leave the cast for more than five minutes,“ Ian explained. „Let the fish dictate to you how to feed on the day – if you let it, the river will tell you all it secrets.“ 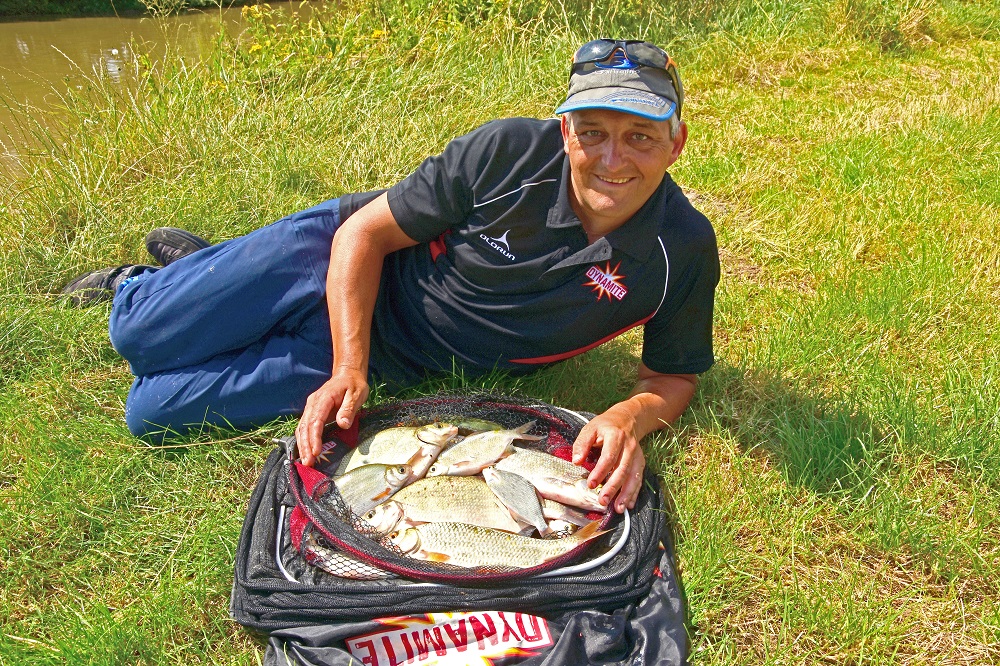