In this high-pressured modern world, many of us are not always in the privileged position of being able to ’session fish‘ every time we visit the bank.

Having a young family and a full-time job, generally I’m lucky to get 12-hours fishing a week, so when I do get chance to ‚wet a line’, I look to adopt an approach that will help me maximise bites.

To illustrate this, I fished the day on the Middle Pool, at the prolific Baden Hall fishery. The Middle Pool is a classic ‚runs water‘ and even though there are a few lumps in its depths, it’s more about getting your string pulled. They might not all be big, but they all count!

Today’s location turned out to be relatively straightforward. With a cold easterly wind hammering down the lake, I spotted a far bank area, close to the middle of the lake, which was sheltered and calm. Keeping my eyes peeled for a couple of minutes, a double-figure carp soon broke the surface. The way I see it is even though only one has ’shown‘, you can pretty much guarantee there will be a few others with it. This is often when a lot of day-ticket anglers ‚blow‘ their chances, by going in too Gung-ho.

For short, quick-hit fishing, I’m looking to prime a slightly larger area than I would if I were fishing a longer (24-48 hour) session. Rather than piling in 5kg of boilies right from the off, I prefer to adopt more of a match anglers‘ approach – feeding little and often. My initial feed will be around 60 to 70, CompleX-T 10mm boilies and White Chocolate & Coconut Cream, roughly mixed 50:50.

I also find that feeding smaller baits, over an area the size of two large groundsheets allows me to sneak the loose-feed in without the fish spooking. Plus, having a spread of loose-feed forces the carp to move from bait to bait. By having to pick up individual items, they’re more likely to ’slip up‘ and take my hookbait without realising. 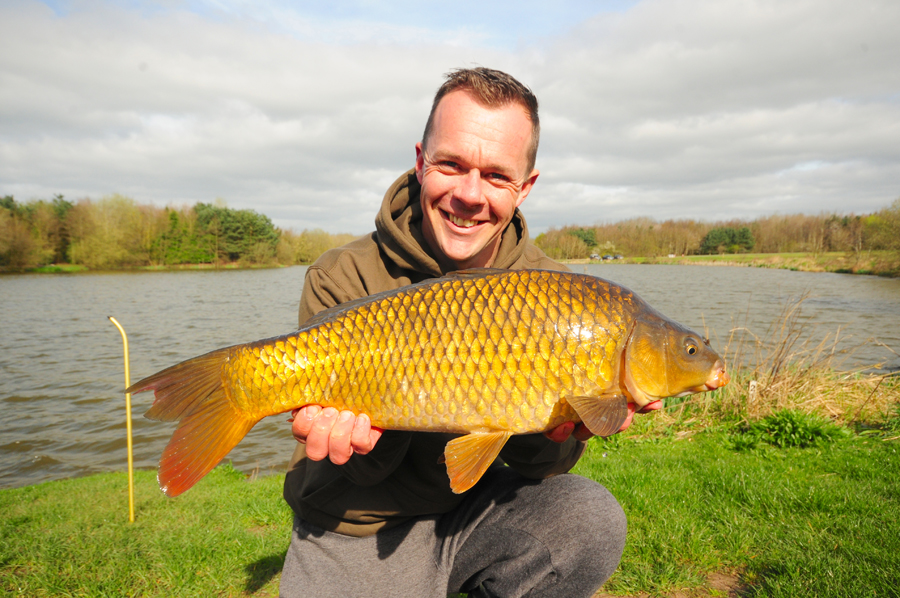 This is again where the ‚match angler mentality‘ comes into play. It is extremely rare that the first bait they pick up will be the hookbait, so you have to assume quite a few baits will have already been eaten. So, as soon as the fish is landed, it is time to top-up.

Throwing out a further 60 mixed baits, again covering an area the size of two large groundsheets, 10-minutes later the right-hand rod was away, and another ’scrappy‘ little common graced my landing net.