Targeting river carp is the last true undertaking an angler can make, if they want to catch a ’never before‘ caught fish. Dynamite Baits‘ Adam Sharpe explains how to do it successfully..

„Targeting fish on a river like the Trent – 185 miles, source to sea, making it the UK’s third longest river – you really feel like you have earned every single bite and run.“ said Adam. „It is an almost certainty that this will be the fish’s first time on the bank too.“ As well as their incredible power, particularly when you put the flow of the Trent behind them, the other thing Adam loves is that there isn’t a single carp in the Trent with an angler-given name, like Mary, Mary’s mate, Lumpy or Trouser Press! „It’s the ‚under the radar‘ element that really gets me though,“ Adam continued.
„One really knows what is in the Trent or any other river for that fact. When you get a run, it could be a barbel, bream, a double or a personal best. The biggest I’ve ever heard of was a 46lb’er. My current PB is 28lb 8oz, but, you never know, that next run could beat it hands down. „Yes indeed, you could say that river carping really captures the true essence of angling.

The first stage of locating them doesn’t start at the tackle shop, but an outdoor clothing company to get yourself a sturdy pair of walking boots: „The one thing river carp have little or no regard for is angler’s welfare,“ Adam explained. „If you want to be in with a chance of catching one, you have to find them first. And that means – literally – putting in the hard yards.“
In the early days, Adam used to walk miles and miles, looking for likely-looking areas and/or signs of fish. The areas he is looking for is anywhere along the river’s course where natural food will gather. Places where the flow – whether in flood or not – will push anything carried in the river’s shoulders. „I want to find a big slack with deep water,“ he continued. „It needs to be between eight and 14-feet deep ideally. The reason being that the wed growth is usually not too bad in these places. Being deeper, they also tend to be silty, which again is home to ’naturals‘.“ Other places that he will try are very rocky, snaggy swims – boulder strewn rather than simply rocky. Large boulders and rocky bottoms house large beds of snails and other naturals, which the carp will come to feed on.The other two classic areas are around bridges. Although you will have to spend a couple of nights targeting both side of the bridge, to find out which side the carp prefer to feed on and weed beds. „You have to remember that these are not stillwater fish,“ Adam explained. „So, they are not used to seeing and going down on anglers‘ baits as they have never seen them before.“

Even though you think you might have found an area or three that are worthy of a cast, successful river carping is more than simply heaving in a load of pre-bait over the next two weeks, hoping for the best. Adam’s next job is to get a visual to conform there are fish in the area.“River carp are very fussy about where they will eat,“ Adam said. „Lots of novices to river carping think it is now just a case of pre-baiting and you’re ‚golden‘. You can try to create a new feed spot, but it will take weeks and weeks before you convince them it is a natural food source. They will swim past a 10kg bed of boilies, if it is not one of their ’normal‘ larders.“ For Adam, rivers are motorways, so it is up to you to find the service stations. One you locate an area, you need to see fish crashing. At this point, Adam will do a 48-hour session, using solid PVA bags, which he will re-cast around the swim every two or three hours until he starts to get fish or line bites. ‚Liners‘ mean they are in the area. Now is the time to either ’stick‘ or catapult some Dynamite Baits‘ The Source boilies around the area where you got some action., with a single Source boilie on the hook. „You don’t need loads of baits either. Around 50 is more than enough,“ Adam continued. „But, if you feel there is more than one carp in the area or you see bream or barbel, you might want to up this a little.“

Regards baits, pellets and sweetcorn are a big no, no. It will only equal bream soup! It is always best to stick to using boilies. Adam’s first choice is The Source in 15mm and 18mm although he will loosefeed 10mm baits too at times if the fish are being finicky. Frenzied hemp and tiger nuts are also a river carp angler’s best friend as again they are relatively bream proof. These two he will loosefeed using a spod, if fishing beyond catapult range rot build up a small bed of feed. „On the hook, I am a big fan of Dynamite Baits‘ Cork Ball Food Bait Wafters,“ he said.
„River carp like a bait that moves slightly as all their natural food tends to move so it looks a bit more acceptable to them. „When fishing tiger nuts, Adam likes to hair-rig two nuts with a piece of cork between, again so they are neutrally buoyant.

Being wild creatures there is no need to mess around. To match his 3.5lb test curve rods, he adds 20lb mainline. Something that will put up with the various snags and detritus on the bed of the Trent. From here though, things take a bit of a turn. Rather than the expected out and out brutish end tackle you’d expect, Adam’s is rather subtle. The leads he uses are two-ounce. The reason being that they make less commotion when they land, so you don’t risk spooking the shoal. „I set it up Slammer/Bolt Rig-style,“ he explained. „I have the flat pear lead free running to a rubber float stop, four-inches up the mainline. This gives them enough rope to hang themselves but not too much so they can eject the rig either. „The hooklink depends upon what he is fishing over. On a rocky bottom, it will be a 20lb coated braid, a soft neutrally-buoyant braid over silt and a soft sinking braid over gravel to a size 6 or 8 hook.

To prevent tangles on the cast, he uses a PVA bag on all his rigs. Although, he ties them very differently to the ’norm‘. „I use PVA mesh, placing the whole rig – lead and all – in the PVA,“ he said. „I have found that solid bags can drift off the spot, even in the slacks, whereas the mesh bags sink exactly where you cast them. I also double-skin my bags so they get to the bottom in the deep water. „Adam fills his PVA bags with around 20 10mm free offerings and a couple of hookbait-sized boilies to give them a ‚taster‘. Other tricks he tries is to mould paste around the hookbait, before dipping it in The Source groundbait to coat the paste. This puts a powerful flavour trail into the river, so the fish can lock onto the scent. The paste also takes a while to break down so you have a much longer acting hookbait, one that stands out well over the rest of the loosefeed. 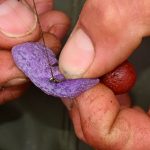 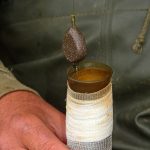 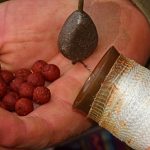 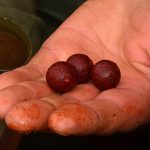 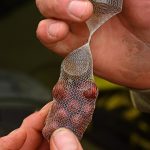 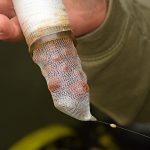 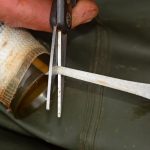 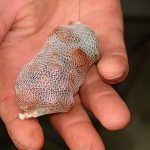 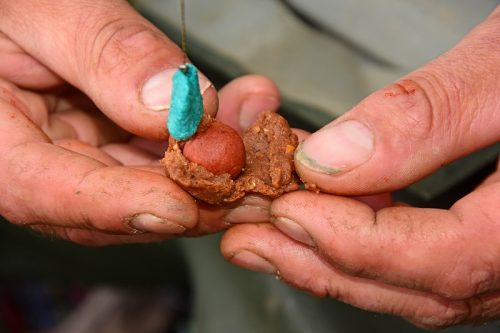 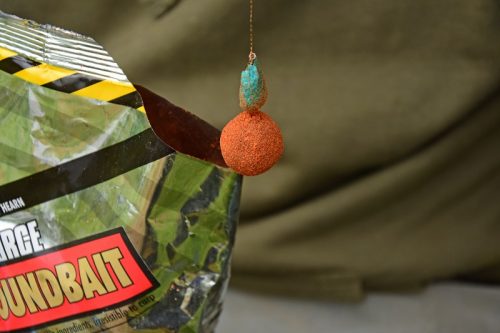 When fishing a session, he then likes to re-cast every three hours or so just to freshen his spots and put fresh hookbaits out so he always ensures he has maximum attraction levels drifting through the water. Although the only fish Adam had during the few hours that I spent with him were bream, the three he had banked during the previous night, as well as ‚the monster‘ he unfortunately lost it still proved that if you are willing to go that extra mile and find your quarry, river carping is a productive if not more so than stillwater carp fishing. Get the basics right and Adam reckons you can enjoy some massive hits, 10 or more fish in a single night. Plus, it is so much more rewarding landing a fish that has never been caught in its life, let alone half-a-dozen times that year at least, like their lake-bound cousins. To achieve anything rewarding there must be some difficulty in achieving it.