Yateley regular, Dave Williams try’s his hand on one of the toughest carp fishing waters in the UK but doesn’t take long to get a result… 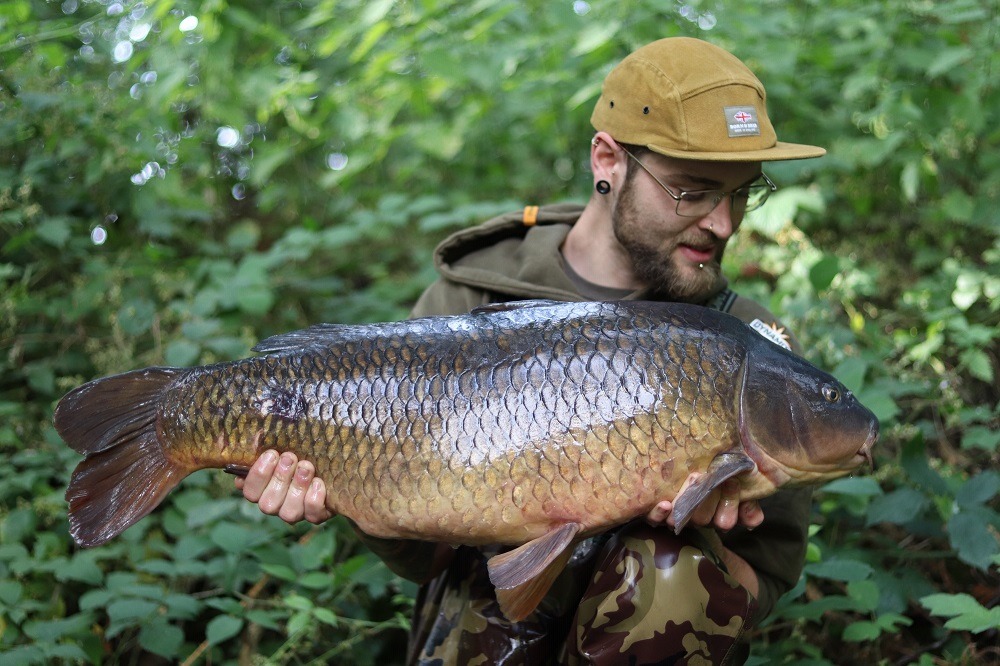 I decided to start fishing another water on my ticket at the start of July. Mostly because I was so tired of how busy Yateley’s Match Lake was and this other lake was much much quieter. This is mostly because it’s regarded as one of the trickiest waters in the country to fish.

The fish however were of a different class and I simply couldn’t wait to get fishing for them. I did a few recce trips around the lake and found some likely looking areas in the margins as well as seeing a few of the big fish in these areas.

I started trickling 18 and 20mm CompleX-T on these spots when I walked the lake to get the fish used to finding them where they’re comfortable feeding. My first trip arrived and I opted to fish near the end of an island. I could see some large grass carp in the area and was told that the carp are very often not far away from the grassies. I blanked for that first 48 hours despite my best efforts to get a bite, but realistically I didn’t expect one that soon.

I found another nice little spot in front of a swim that didn’t look like it got fished much and gave it a good helping of complex t, hemp and tigers in preparation for my return the following week. I did one night on that spot the following week before being woken up at first light by a brace of small tench, one on each rod.

I decided to leave the rods out and do a few laps of the lake too see if I could find some fish to go at. I managed to see most of the lakes stock between two sets of snags, with the biggest common and mirror in the lake sat under the same willow. That made my mind up where I was going to fish for the final night and I set about preparing with short rigs baited with 20mm CompleX-T fished up the margins and under the snags. Unfortunately nothing happened that night and I again left the lake empty handed, minus the tench.

A take at last…

The next week when I returned I fished the other set of snags I’d seen fish in the week before. One rod waded under the bough of a willow in the water and the other flicked up to a deep sandy area off the shelf  just past the end of the snags. I baited both rods with 20mm CompleX-T and put a good 2 or 3kg of freebies over each rod.

The following morning at first light I had a screaming take that nearly took the rod from the rests. It was a very powerful fish and it took me a while to get it from under the snags. I eventually did and the fish turned and started charging off into open water and I unfortunately got cut off by something just after. Slightly burnt but not deterred I put the rod back out and spent the rest of the trip desperately trying to cool off and then watching the outrageous lighting storm that was happening.

I returned the following week having baited the spots when I left the week before and got the rigs out in the same spots using the same tactics, hoping lighting would strike twice and I get another shot at one of these tricky old carp. The first night passed uneventfully for me but I got a call from my friend Tom who was fishing just down the bank from me saying he’d got a decent fish.

I went round to do some pics and help with weighing and it turned out to be the biggest fish in the lake! I sat around in my swim that day after redoing my rods and the weather was spot on. At some point during the early hours that morning I had a steady take on the rod out in open water and I lifted the rod into something that felt quite heavy.

Not wanting to get ahead of myself I had been repeatedly telling myself it was a grass carp. It went in the net after an eventful fight under the rod tip and as I shined my torch on it I realised it was a dirty great common, ideal! I popped it in the sling for an hour until my mate could get down and do pics and made myself a coffee before sorting the rod out.

The common went 33lb and looked absolutely immense. Dark back, gold flanks and peachy vein covered scales along its belly. I was speechless whilst doing photos of it and was on cloud 9! 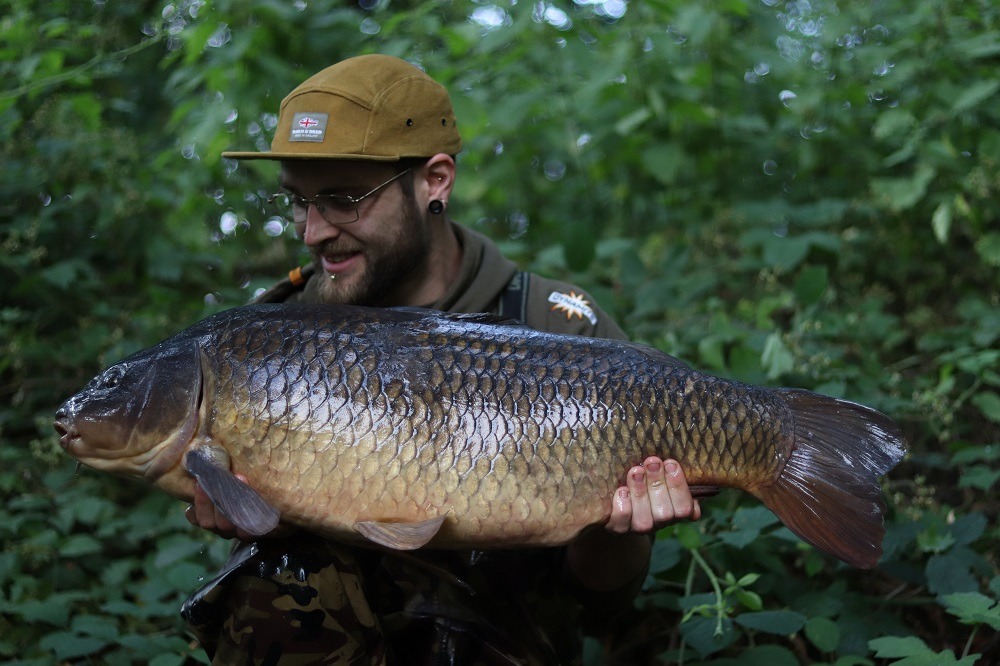 About 10 o’clock that morning just after Ryan had left I received another take, this time on the margin rod. I lifted into it and the unmissable yellow flanks of the golden ghostie writhed out from under the tree. It went in the net easily really with no real fight at all. I called my mate Sam to come down and help me out and we weighed her in at a heavily spawned out 32lb 10oz. Such a bizarre looking fish, but very old and wary nonetheless! Sam got some mega shots and I couldn’t believe my luck to have bagged a brace of these tricky old carp after only eight nights. I gave the spots another helping of complex t before I left, desperate to get back down the following week… 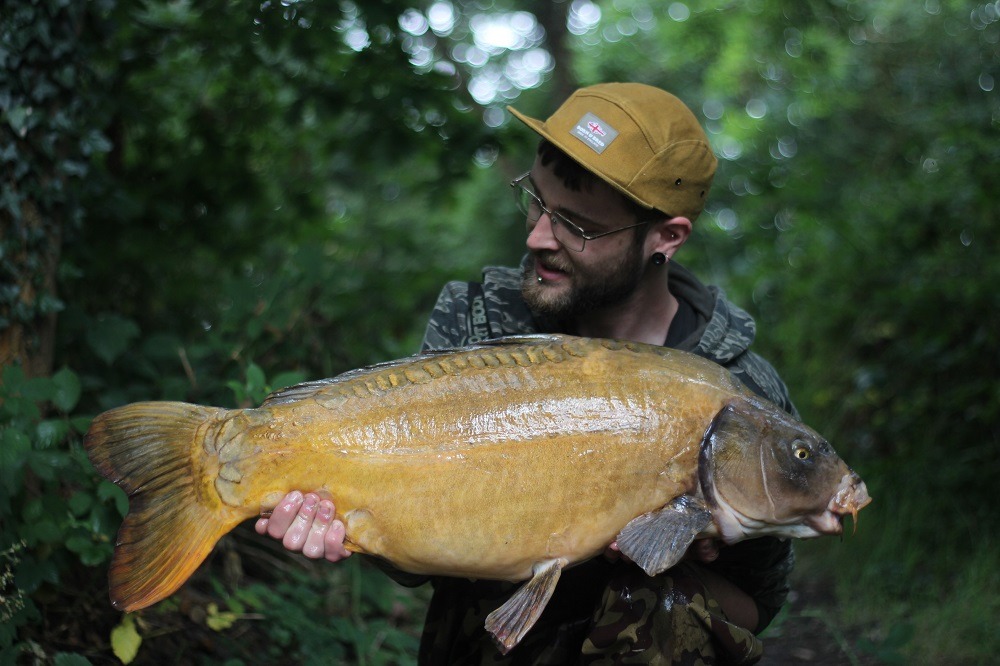 A unusual but much welcomed ghostie