Jake Lund reckons surface fishing for carp is the most fun you can have with your clothes still on! He’s how he does things… 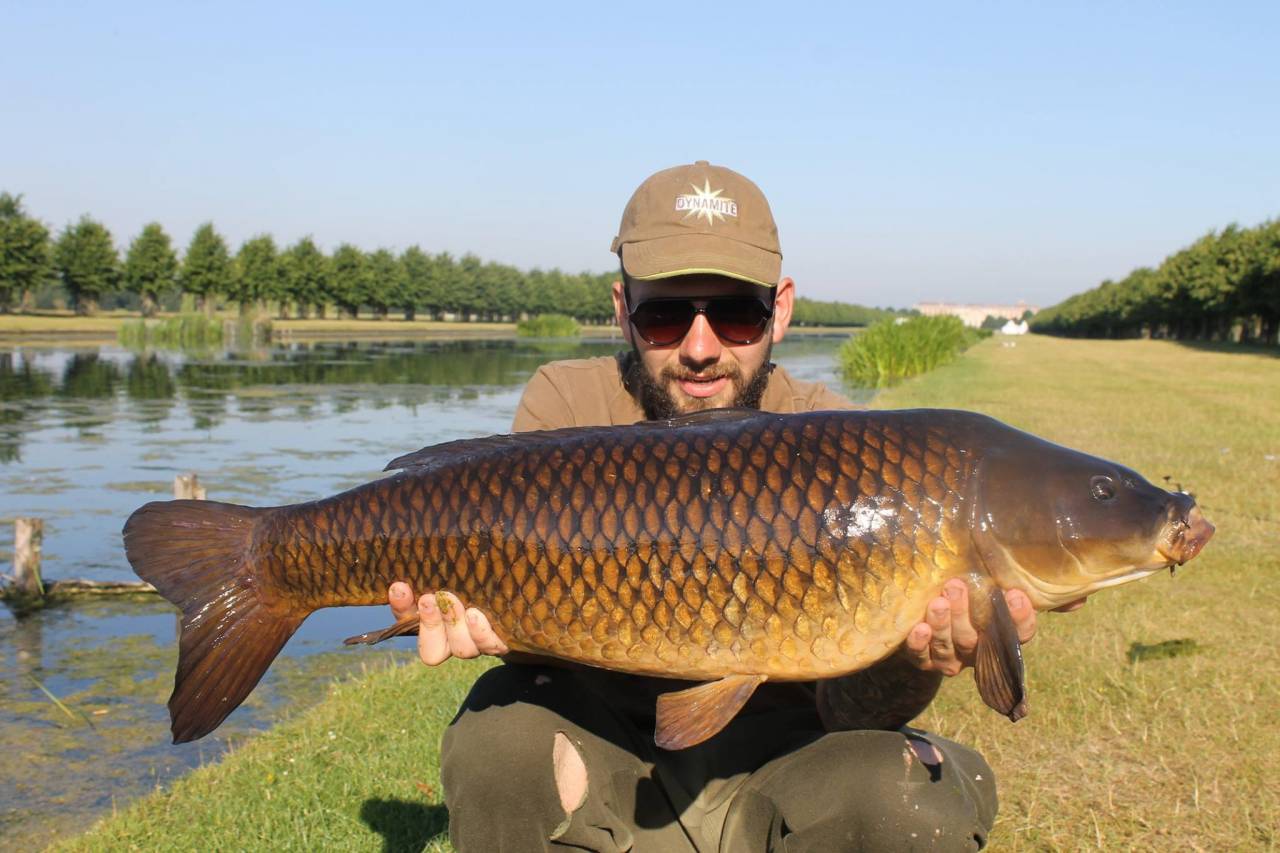 There are few better sights than watching a carp’s lips envelop your Big Fish Floating Durable Hooker or trimmed-down pop-up. The scenario of witnessing the swim develop over a period of time as more and more fish start to feed, compete and eventually ‘Pac Man’ on the top is a massive buzz.

It’s not all about necessarily targeting big fish – although, the lake’s ‘lumps’ are just as prone to snaffle down a hookbait off the top as the smaller ones are. I know this first hand, as my current surface-caught personal best carp stands at 40lb! And this is why surface fishing is my favourite way to carp fish.

Up close and personal..

For me, surface fishing is exciting as well as being up close and personal. Plus, you’re always moving swims, working for bites, going to the fish, making this happen and being opportunistic. Plus, as you’re usually using lighter gear, the fish is much more amplified.

During the summer months, when the fish want to be in the upper layers, there is little or no sense fishing three rods on the bottom if you can see a load of carp cruising. There is no way you are going to get any action until the night, when the sun goes in and the carp naturally drop back down in the water. This is particularly pertinent if the lake you’re fishing on is over eight or nine feet deep.

The first rule of ‘surface club’

In a word – mobility.

If the lake is large and barren, with little or no marginal features, then I tend to go towards fishing with controller floats, Spombing out my Big Fish Floating Feed Pellet loosefeed at range.

If the lake is more like the club lake with lots or overhanging trees and other marginal flora, I am more likely to freeline in and around the snags and overhangs.
With this type of water, I walk a circuit, feeding likely-looking spots with a handful or two of the Floating Pellets. Then, on the second walk round you will nearly always find at least one carp that is ‘up for it’.

Like I said, I will only freeline in these areas as a controller float is just asking to get snagged up in my opinion. It makes it so much easier to fish I think. Plus, there isn’t a big controller float splashing in at close quarters, which can very easily spook the fish. A freelined offering is just like another freebie dropping in. 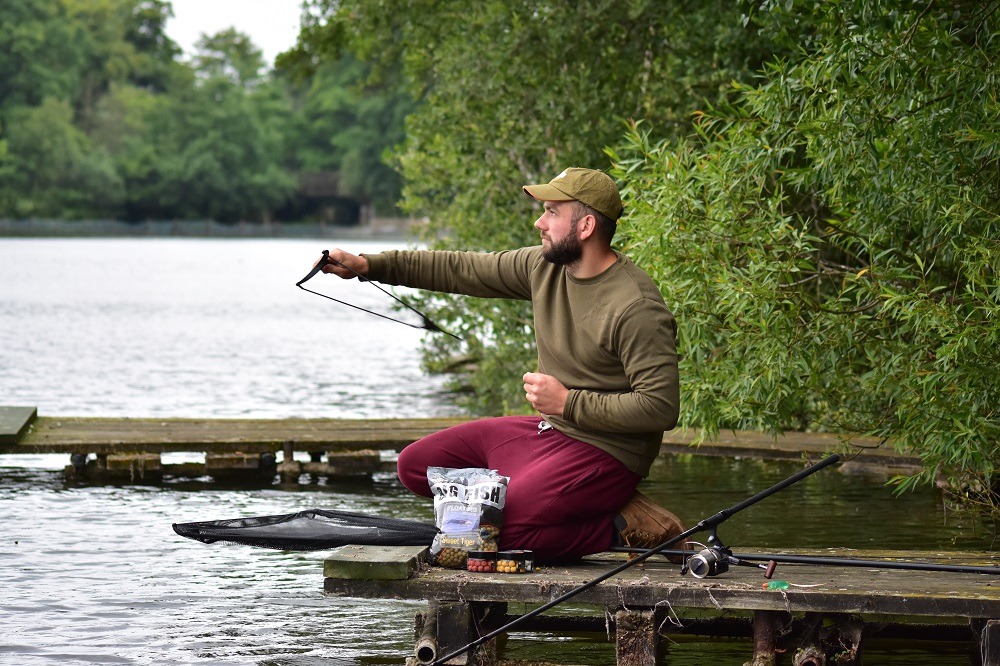 On larger featureless lakes, i like to loosefeed at range and fish controllers

Getting the set-up right

Rod choice I go for a 12-foot Carp Spirit X1 2.75lb. These are quite soft and progressive, so are ideal for floater fishing as well as fishing conventionally on the deck of course.

I prefer a softer rod as I’m looking to use lighter lines – 10lb – so the softer rod gives you more cushion during the fight. It also makes casting the light hookbait a little easier too. 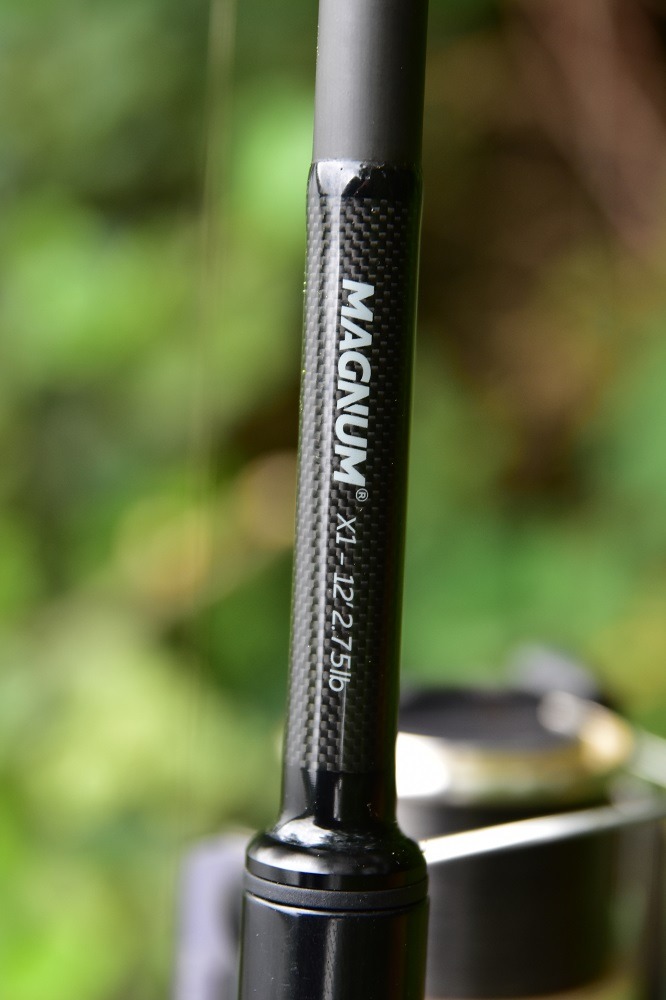 Just like a pole angler, you need your set-up to be well balanced so you don’t break the line or get hook pulls. The hooklink is the same as the mainline. A four-foot length of 10lb mono. I like to use Sufix Duraflex, as it floats quite well.
I go for a four-foot hooklink as it is long enough to get away from the controller – when I’m using one and it also allows me to keep a straight line to the hook, so the strike is much better. Having a hooklink six-foot or more usually sees the hooklink curling on the top in the drift so you have too much line to pick up on the strike which generally leads to missed fish.

For my hook, I like to use a size 6 Wide Gape. This allows me to side hook a Durable Hooker better but it also sees the hookbait sitting lower in the water. This is an advantage as it makes the offering look like it has taken on more water, so it has been in the water longer and so is safer to eat.

Regards controller floats, like I said, I try to avoid them if possible, but when I do use them I tend to use the ones that sit vertically in the water column rather than those that sit on the surface.

I find they are less prone to drift and present a little better. 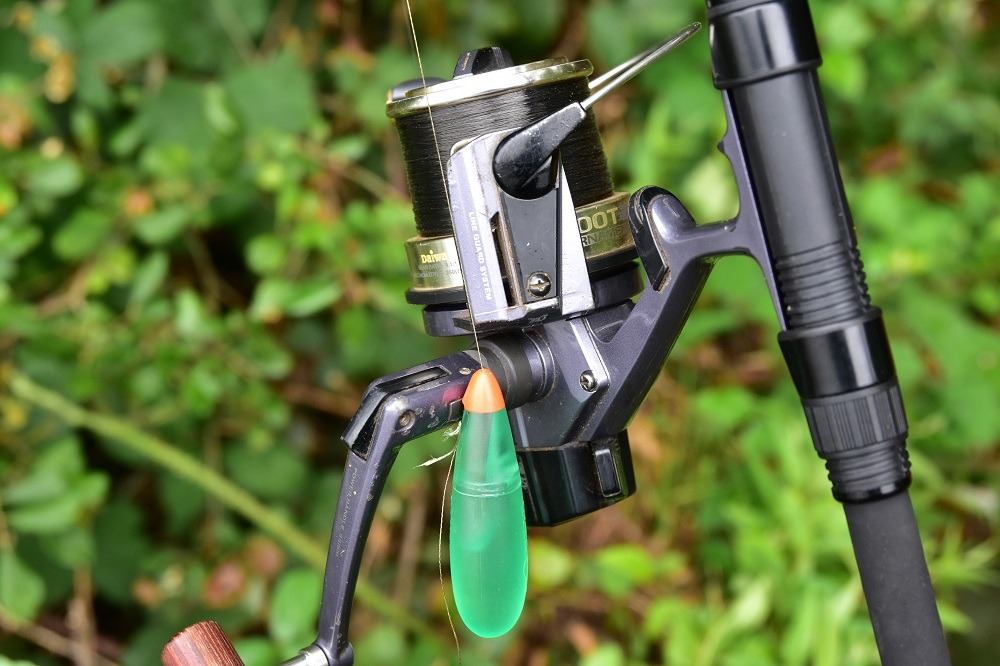 I like to use vertical controller floats to combat the drift

There is only one choice of loosefeed for me and that is Dynamite Baits’ new Big Fish Floating Feed Pellets, straight out of the bag. They float like corks, are naturally oily and perfect for getting the fish ‘going’ on top. They are also available in three colours and flavours – Fishmeal, Krill and Sweet Tiger.

When it comes to using them, I like to mix and match although using just the one flavour/colour can be just as goo d too.

You can also use expander pellets, but I like to keep all my loosefeed fairly large – 11mm. If you feed smaller items, I find that the fish can become pre-occupied on these smaller food items and so ignore the hookbait. 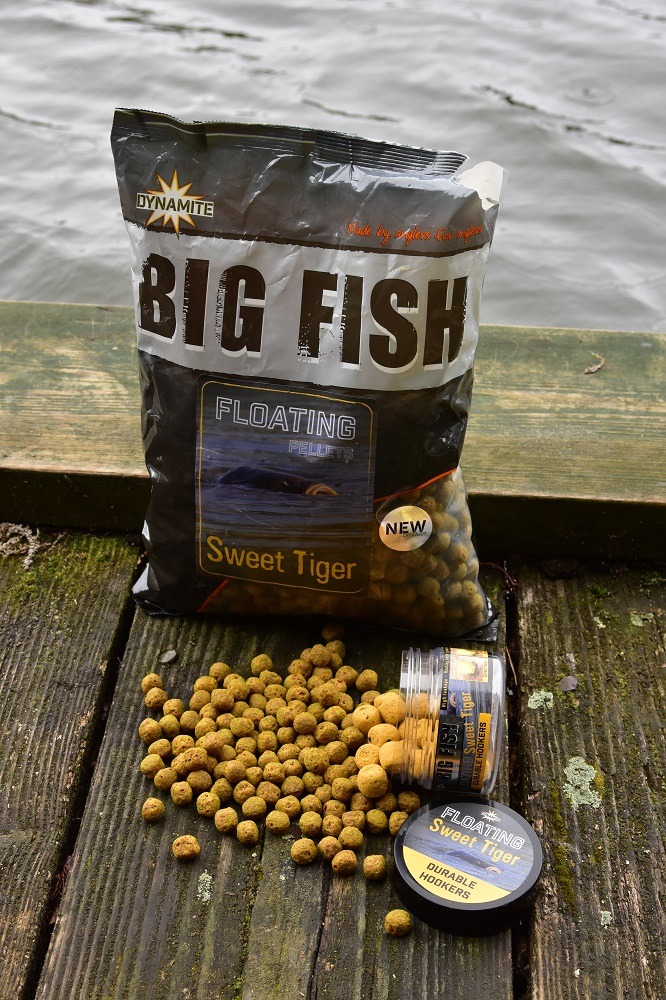 For loosefeed Jake likes to use large floating pellets

Although pop-ups, expander pellets and cork balls all work when surface fishing, Dynamite’s new your Big Fish Floating Durable Hookers are bespoke surface hookbaits and again come in three variants – White Fishmeal, Yellow Sweet Tiger and Red Krill.
I tend to use the white ones at range as they are easier to see, but when fishing close in or free lining, I tend to use either the Sweet Tiger or Krill as I think they are subtler. 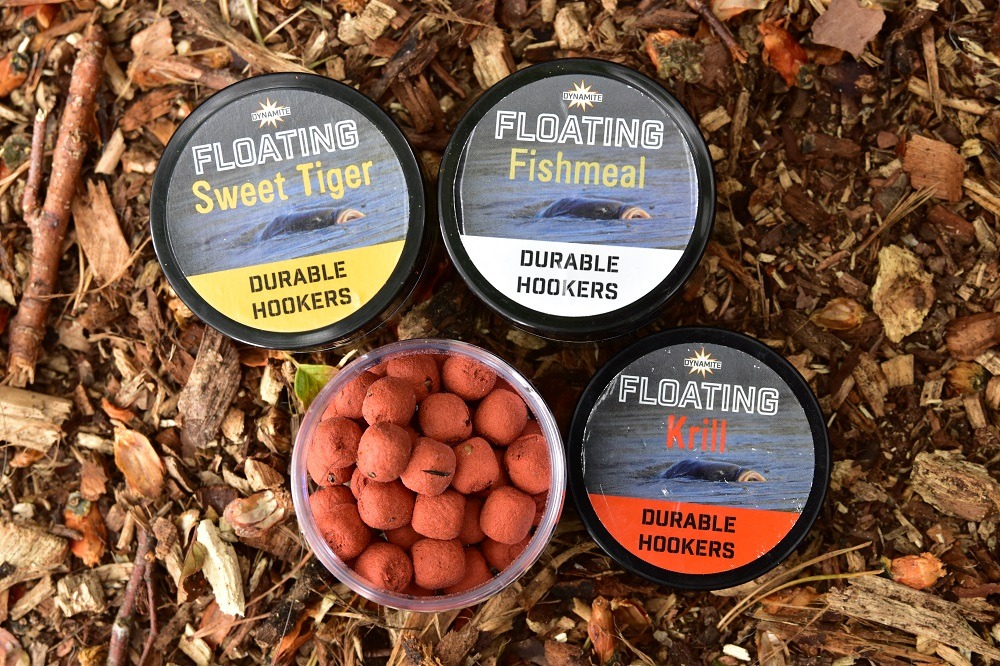 When freeling close in I often use a double floating hookbait

When I’m freelining, I will hook either one or two depending upon the range I’m looking to cast. If the fish are being cagey, I will also use just a single on the hook, the same as when I’m using a controller too. 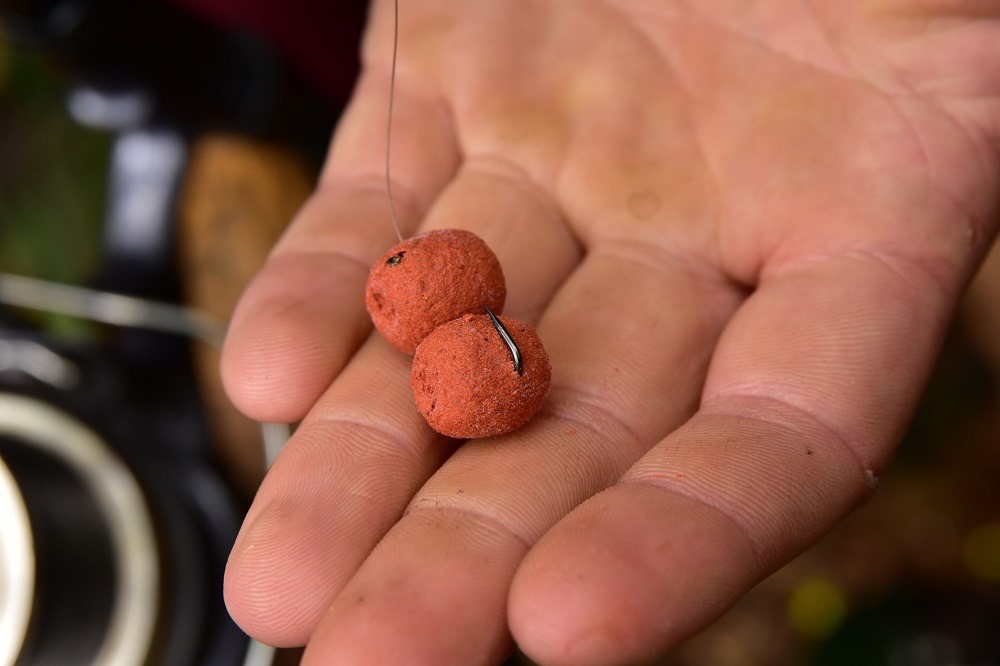 Getting them on top…

When surface fishing, it pays to fish one swim at a time, rather than trying to keep two or more going as you’ll end up spreading the fish. The next job is to get the carp feeding confidently before you try catching them.

To kick things off, I usually catapult two or three pouches of Floating Pellets into the swim before letting the carp start to take them. 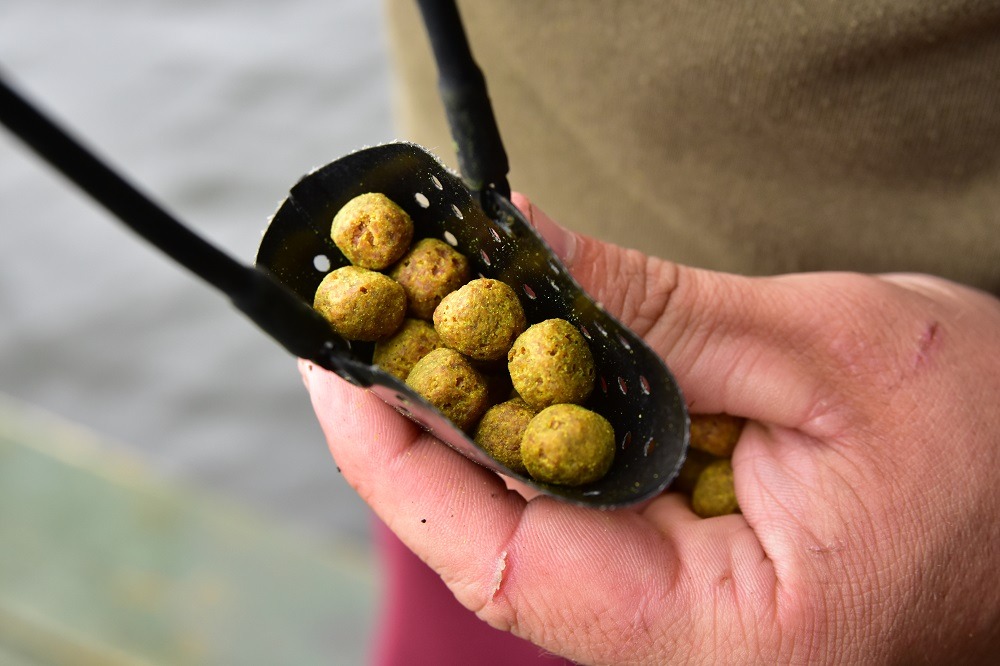 If there is only one taking, don’t cast. You need to get to a point where at least two or more are taking, this means they are starting to compete and so will be easier to fool. You will know when it is time to have a go for them.

At this point, I will overcast the feed area, before slowly drawing the rig back towards them, until the hookbait is in the centre of the loosefeed.

You now need to keep your eyes peeled on the hookbait, but also the mainline too. You want to try and keep as straight a line to the controller as possible, not letting too much of a bow form – hence the reason I like to use shorter hooklinks than most.

If too much of a bow forms, as well as making the hookbait move unnaturally, if you do get a take, when you strike you end up picking up the excess line rather than striking cleanly into your quarry.

When to strike is where the art of floater fishing comes into its own.

It is only a skill that you can master by doing. You need to learn from your mistakes, even though you are missing bites – which you will – you need to keep trying until it becomes almost second nature. If you watch a really good surface angler, it is almost poetry to watch!

That said, even though the sun hasn’t been exactly ‘cracking the flags’, I’ve still managed to put a couple of double-figure carp on the mat.

And although I was never going to threaten my current PB, it was still a very enjoyable way to catch.

Certainly, more interesting than sitting behind a motionless buzzer set-up all day, that’s for sure…