Ross joined team mate Richie Leat and the pair bagged several big carp to over 60lb from a fishery in the Marne Valley. Here he tells his story… 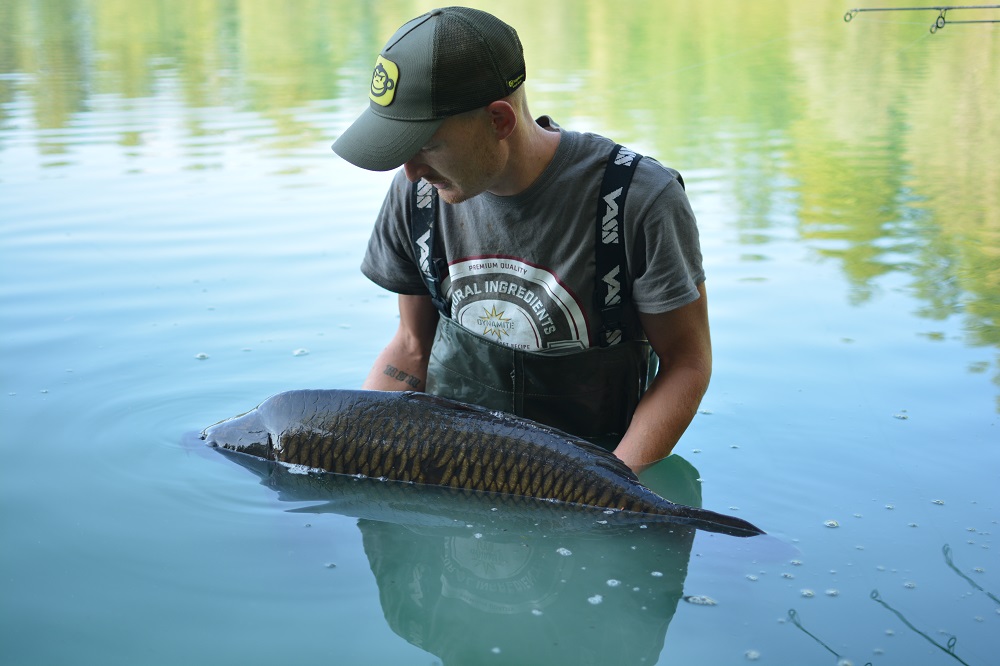 The first weekend of August marks an annual France trip to the north of the Champagne region, this year being our second trip to Marne Valley Lakes.  Needless to say after last years results we were all excited to see if we could even scratch the surface of what was but no one was prepared for what was to come.

I spent the Friday mixing bait and making sure there was plenty to last the week as last year I ran out by Wednesday and resorted to Intermarche’s finest tins of chickpeas, sweetcorn and lentils to bulk out the particle mixes purchased from owner Chris.

With what I thought was a ridiculous amount of bait to see me through it was time to head under the ocean and meet the rest of the group on the other side. Luckily for us and unfortunate for others only four of us (plus 11 year old Tate) could make it this year meaning we had 12 acres to share between 12 rods.

The lake is virtually square with the exception of a point, I love a point and although there was fish in the area I felt that more were present at the other side of the lake in a corner swim that had a nice open water gravel hump near the edge of a huge 18 foot hole.

It was 36 degrees at the time and staying that way until Thursday when it dropped to 24 over night so I knew the gravel humps across the lake would be the obvious features for the week. The peg also had the only real snaggy spot on the lake which also had numerous gravel ledges nearby before dropping into the 18ft hole. 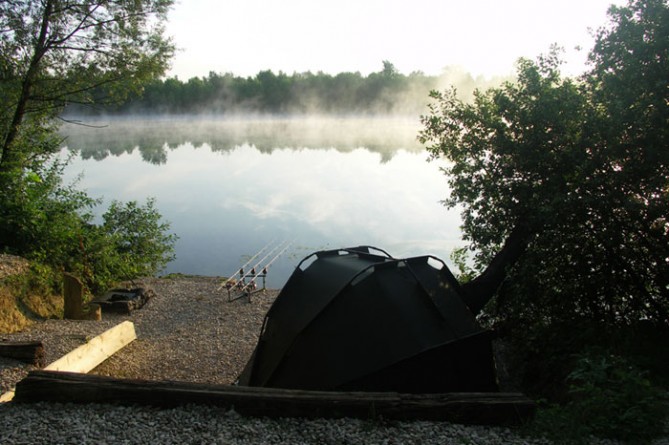 I came out first in the draw so no time was wasted clipping up the rods and getting some bait out, being already familiar with the swim as I previously fished the peg next door everything was sorted relatively quickly.  I decided not to position the rods right away and let the fish have a free feeding period whilst I recharged after the travel with a coffee with good friend Richie Leat.

The point is a good area to see the whole lake so it was easy to keep an eye on the spots at the same time, we both watched on as the open water spot didn’t stop slicking from the initial bait drop and it wasn’t long before bubbles started appearing followed by continues shows.

An hour went by and off I went. All three rods went out first chuck and confidence was high it just felt like everything had fallen together and this year was going to be that year we all dream of, catching plenty of fish with the hopeful biggun thrown into the mix.

First fish of the trip..

Before I knew it the day dreaming was over and the left hand rod was away. A double corked out Frenzied Tiger Nut tipped a piece of plastic corn balancing over a Ridgemonkey size 4 Rm-Tec Curved Shank Hook and 15lb Rm-Tec Flourocarbon Hooklink had produced my first bite.

A lengthy steady battle later, the net slid under a pristine, lovely dark 38lb+ common. What a way to start, all the lads came over for the pictures all sharing the moment with that look of excitement and anticipation, it was 2pm on the first day a couple were still setting up camp and feature finding and the first fish had been out already. 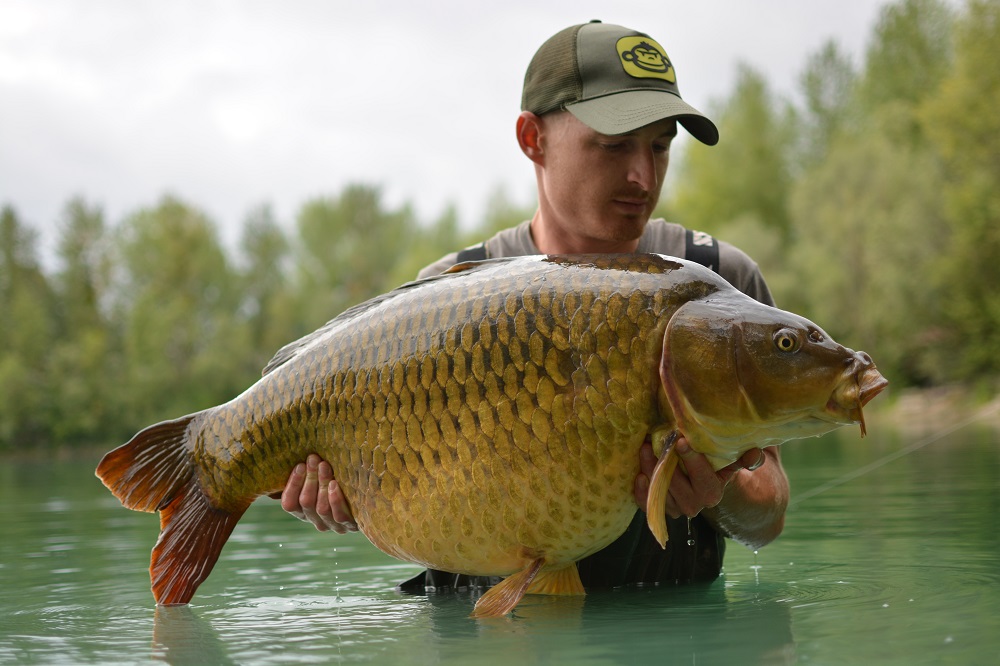 Ross got straight into the action on Marne

The rod went back out and no sooner than the lead hitting the deck I was flat rodded following by the line pinging out the clip, the fastest bite I had ever witnessed let alone had myself.  Unfortunately shortly into battle the hook pulled.

Although a fish was lost it didn’t bother me that much I had all week to make up for it and before I knew it the snag rod was away. It had dropped back straight off the marginal ledge and into the depths of the huge hole.

My luck had ended..

While on the journey over to Marne I spent a lot of time talking about one particular fish I had taken a photo of the year before. A mid 50 that is like a heavily plated linear, it has a few scales above the linear line on its right shoulder that are really obvious. I felt the weight of the fish in battle and all I could think of is what if this one was it!

It took an eternity to gain line just slowly plodding staying deep, the water level was a little lower than usual due to the hot summer we all enjoyed this year so I had to take to my waders to get the edge of the deep hole which my side of it was only roughly 3-3.5ft at its deepest.

I stood at the edge like a nervous wreck steadily bringing my prize closer to the surface, as it head and shouldered a rod length or so in front of me it flashed those few distinctive scales at me before almost winking flipping over and pinging the hook out. I couldn’t believe it my wish for the trip was right in front of me on the first afternoon and it got away.

A few choice words were let out turning back with my tail between my legs, moments away from what could have been.  I think the day ended with 7 bites, two being grass carp and the other two being a couple more 30lbers to cheer me up a little.

The next few days…

Much was the same for the next few days except for the lost fish thankfully and a few 20’s thrown into the mix.

I had a plan all week to move to the opposite corner of the lake for the last couple nights. No one was fishing in that quarter of the lake and all week fish just had to turn up there and I fancied viewing the lake from a different angle for the remainder of the trip with the hopeful bigger carp.

I made the move at 7am on the Thursday morning in the pouring rain after losing a fish from the snags. I was out in the boat during a lightning storm, probably wasn’t the greatest idea going out there whilst everyone laid asleep but I just couldn’t leave it out there and wait for the storm to pass.

When I arrived at the other end there was already fizzing apparent at short range scattered around in a few directions on top of small gravel humps people must have baited the week previously.  The spots were smaller than the one at the other end and had a bit of a mucky covering on them. With this in mind I opted to change the rig approach to a single corked out Frenzied Tiger Nut tipped with plastic corn popped up slightly on a german rig tied with a size 4 Rm-Tec Beaked Point Hook and 20lb Rm-Tec soft coated braid.

The bait approach remained the same, a bait per bite approach with one heavy offering per day of a variation of Dynamite Frenzied Particle Range, Monster Tiger Nut Boilies and some nuts all juiced up with Evolution Oils and Monster Tiger Nut Liquid Attractant.

A couple of hours into the move and a rod was away, I hadnt seen any fish showing close to my spots but it was clear the odd fish were milling around. A short battle later and the biggest of the trip for me slipped up, A 45lb perfect condition dark mirror not many scales just a few near its tail and each side of the dorsal fin. 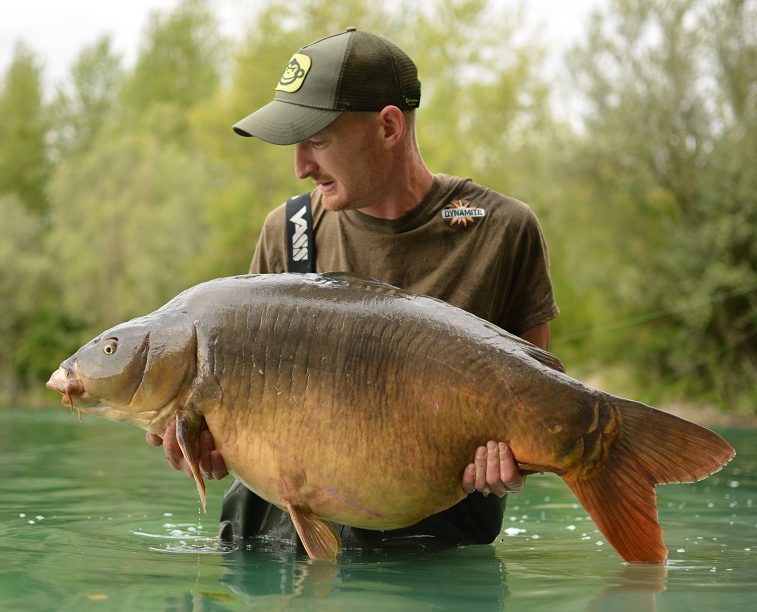 This pristine, dark mirror fell to a single corked out Frenzied Tiger Nut

Finally I was among the forties after appearing to be on carp pest control while a couple of the others had 50lb+ fish and even a 60. My luck continued after this one as I landed nine carp in the last couple of days including a few more 40’s  bringing my total to 44 bites throughout the week.  By far this is my best trip overseas or even ever in truth, 44 bites in a week had never happened to me before and although my only clear chance at a 50+ was lost at the beginning of the trip I couldn’t of been happier with my result. 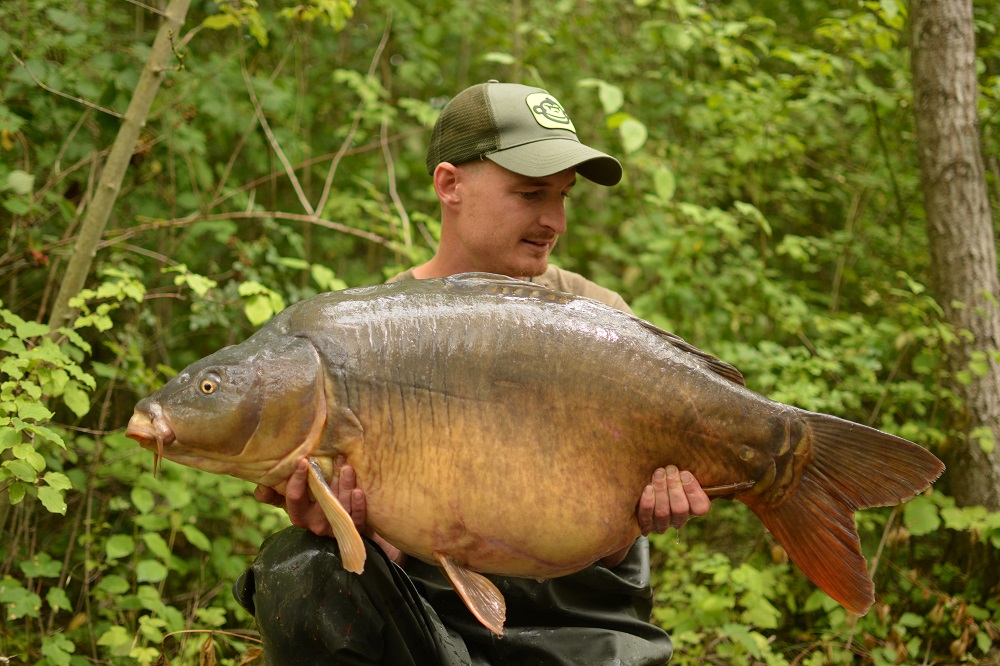 Another mint fish from a successful French trip