In this three part series, carp angler Adam Whittington reflects on his time fishing the famous Wasing Estate. In his opening instalment, Adam reveals how a stream, a few foam nuggets and thinking outside the box helped him to a big hit of fish. Here’s how he got on…

DWARVES, VIKINGS AND A GIANT

When Andy Mackie asked me to put an article together for Dynamite, my answer was both quick and emphatic; no way, too busy, like to keep my head down, struggle not to offend anyone and then he offered me a tin of tiger nuts – free as the air and unopened. If he’s prepared to bring out the big guns then I’m in.

Around 2010 I became a bit disillusioned with modern carping – it comes to us all at some point but, thankfully it’s not for ever. However, a man needs to fish, to avoid genital shrinkage and depression, so I spent a couple of fascinating seasons focussed on specimen angling.

Everyone should chase three-pound perch at some point. They are truly massive, achievable and proper characters. When not eating my livebaits they are probably starting pub fights or wolf whistling Rudd.

My brief carping interlude ended abruptly when, a mere seven years after putting my name on the list, I got an email offering me a place on the Wasing syndicate. Now this was a game changer and I felt that welcome spike of excitement knowing a new chapter had started.

Roll forward to the start of the season and I’m unlocking the gates for the first time. Half a mile of torturing my old Mondeo on the track later and I was parked up looking at an achingly beautiful carp water.

For those who don’t know, Cranwells Lake at Wasing is twenty-three acres of shallow, immensely fertile water with a couple of islands. I was going to say ”if Carlsberg did carp lakes..” before remembering it tastes like goat urine. Let’s go with “if Kronenbourg did carp lakes….”. You get the picture. The lake was beautifully laid out with only a dozen or so swims, and the anglers were a brilliant mix of welcoming, eccentric or pissed. 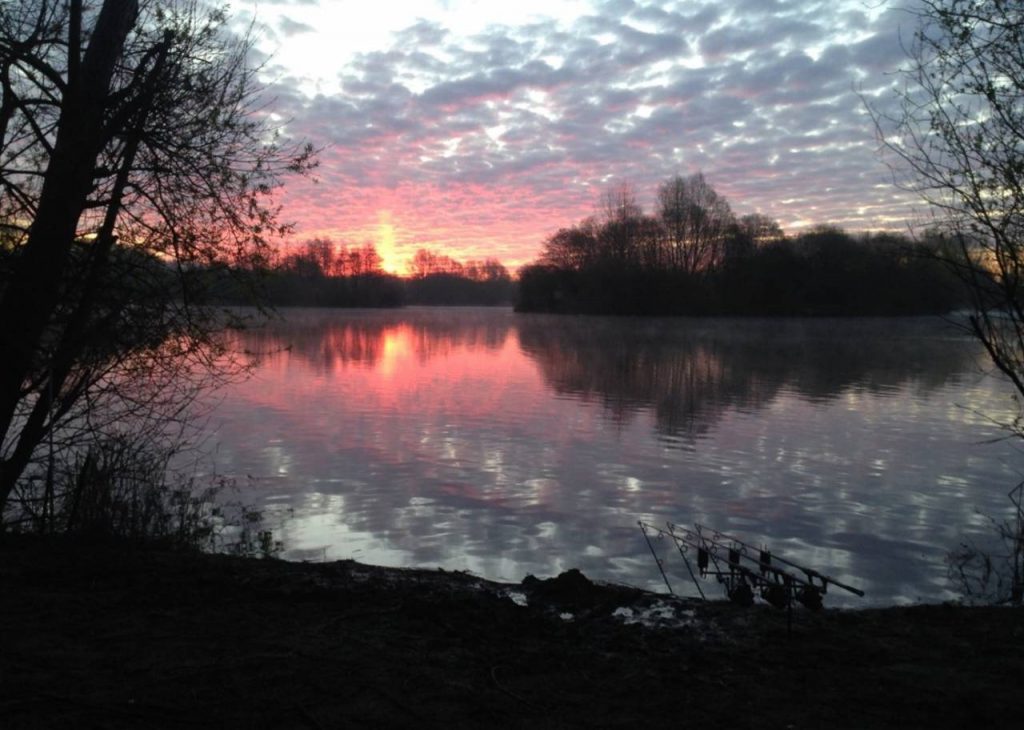 If Carlsberg did carp lakes…

There’s got to be something very special about any lake that can grow a true English carp bigger than any caught before or since. When I joined, the Parrot was nudging sixty pounds and was the prize above all else, though a couple of the A team were very close to fifty and there was a very healthy head of dark, scaly fish as back up.

As a welcome, the first swim I set up in gifted me a pair of Hobbies chasing dragonflies just yards away. I was blown away at the sight, not realising just how common it was in the warmer months. After successfully breeding the following year there were a family of seven Hobbies working the lake each day. I soon went from slack jawed amazement at seeing my first Wasing Hobby to barely a glance and finally shooting them with laser pens…I am, of course joking – I always missed.

I fish a couple of nights, every other week and those first few sessions were brilliant, if not overly productive in the summer heat. I had rediscovered my love of carping with a vengeance, soaking it all in for those first few nights with just an upper double to start the ball rolling.

It has long been a bait boat dominated water and it is easy to see why. Many of the fish were concentrated in areas more than a hundred yards from the bank, generally in clear areas amongst weed, small channels or very shallow areas of less than three feet deep.

To bang a lead out into such shallow water would render feeling for a drop almost impossible and the casts it would take to finally be happy with a bait would frequently see the fish drifting off to quieter pastures.

I have nothing against bait boats, using them a lot at Cutt Mill in the late nineties – to see a good bait boat angler at work is an impressive and overlooked skill in itself. Like any form of angling, if it can be done, it can be done better and there were some fine anglers at Wasing.

I frequently saw boats used in conjunction with a throwing stick, boats dropping single baits and a level of stealth that impressed. Softly opening hoppers had been modified and boats were often drifted silently onto the spots when wind allowed.

At the time I didn’t own a boat, but was kindly lent one by a good friend. It was neither fancy, nor stealthy – possibly the only steam powered boat on the lake, but it did the job. It did lack the all important echo sounder though and I would laboriously tow a marker float out towards the horizon often to have it drop neatly into solid weed. And repeat…

My moral code is simple when it comes to gadgets – if I didn’t have it, it was cheating and once I have one then it’s to hell with the haters, they’re just jealous!

I learnt a little more each session and, as I became increasingly tuned in to the lake my results became more consistent. The fish themselves were astonishing and full of character. One near thirty in particular blew me away during that first season, as it was a big plated, fully scaled fish on one side, yet a zip linear on the other -a truly bonkers animal! 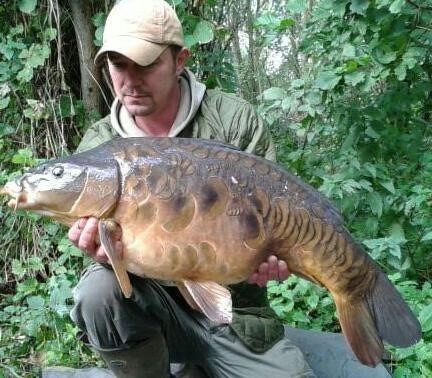 A proper looker this one!

In late March, a week long deluge saw the River Kennet burst its banks and the already perilous track became a tall order even for 4×4’s.

I had three days off work and a car full of tackle so wasn’t taking no for an answer. At one point on the journey, my engine screamed as the front of the Mondeo lost traction as it floated in the deepest section, but it kept going.

The garage later described the water damage as permanent! Importantly though, I was in, had the lake to myself and the forecast promised drier days ahead. I walked the banks, as always, to look for clues and witnessed some incredible carp behaviour.

A section of the Kennet was rushing over the track and into the shallow margins of the lake, leaving a huge brown trail through the normally clear shallows. Two carp had fought their way upstream, like migrating salmon and were thrashing about in ankle deep water where cars would normally drive. I watched them for a while as they dropped back downstream into their rightful home and noticed more shapes, hanging just off the strongest flow. I clearly needed to get baits as near to the influx of water as possible, where carp seemed to jostle for position in the current. 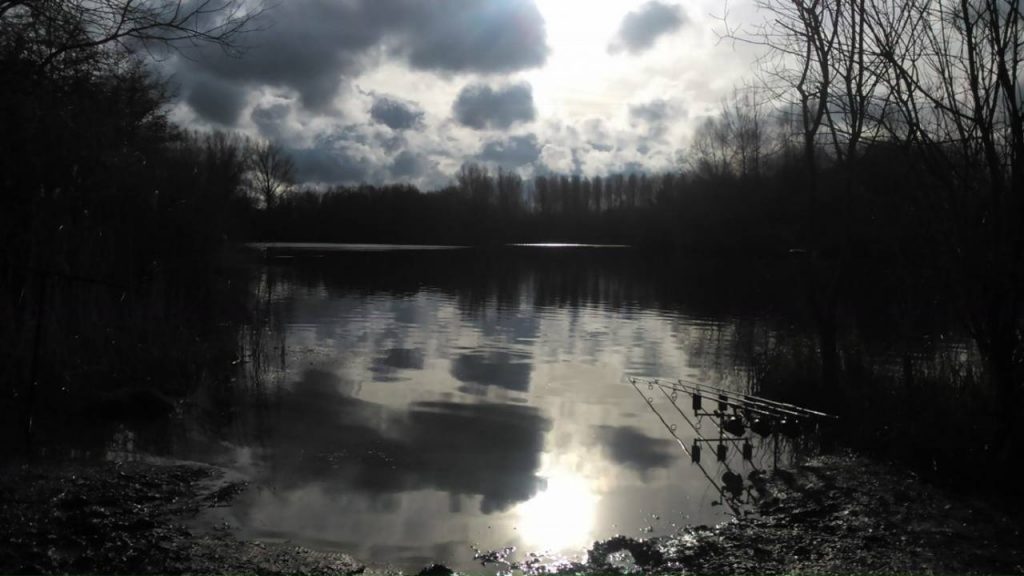 The forecast promised drier days ahead…

I found a muddy, but functional swim where I could wade baits into the zone. The fish seemed far less spooky than usual, clearly spurred on by the newly coloured water and intoxicating flow.

Six fish followed during the next day or so before bites seemed to slow and I went for another wander.

Away to my far right was a huge area of woodland, out of bounds to anglers. About 150 yards into the woods, where I may have inadvertently wandered, there was another powerful stream that flowed in from the overflowing Kennet. This was an even more significant amount of water and I felt sure there would also be fish nearby.

By now, the whole lake had coloured considerably, so I didn’t see any definite carp but it looked and felt right. When I got back to the swim and looked to where I thought the stream came in I realised I had no clue where it was.

From back in the swim, all I saw was a uniform line of trees at range and even binoculars couldn’t pick up the subtle ripples of the flowing stream. A plan was needed. I prepared a baited rig and had the bait boat ready to go before heading back into the woods with a pocket full of multi-coloured foam nuggets.

Like a flotilla of tiny Viking ships, I tossed the nuggets into the stream some 30 yards away from the lake, deep in the woods. Then I ran back to the swim as fast as chest waders and boggy ground would let me. After a few sweaty seconds the flotilla emerged – miles away from where I initially perceived it to be – and drifted out into the lake. Target located, the boat was sent out to the new flow and bites came quickly. Ten fish graced my net over those three soggy early Spring days and the knackered car and wader-induced fungal infection had all been worth it! 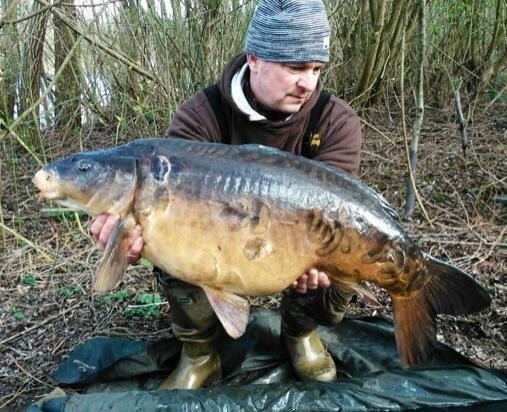 The Viking technique culminated in the capture of this fine mid 30 mirror.

In the next chapter, some of the A team make an appearance, there may well be lager and a Welshman commits murder…