“Me and my mate Mario arrived at our friends house in Echourgnac (Dordogne Region) on Monday evening after a gruelling 11 hours drive to Murphy’s Lake in France. It had been raining hard for some time so we decided to just  pre-bait some spots and stay overnight at our friends Pete and Shell for dinner and to chill-out after the long journey. “For pre-baiting we fed a mix of Frenzied Particles, Maize and chopped Tigernuts with a few 15 mm Monster Tiger Nut boilies.”

“We woke up about 8 o’clock the next morning and after a nice cup of coffee and fresh croissants we headed off to the lake. “The sun came out and the weather forecast for the next few days looked nice. We set everything up quickly and our rods went straight out that afternoon. “The water temperature was around 8 degrees which was not the best, but conditions were set to improve for the next few days with sunshine and temperatures of 20+ predicted!”

“Our friends Pete and Shell did a great barbeque for us that evening as they always do and we enjoyed catching up on everything. “Just as darkness began to creep in my right hand rod signalled a couple of single bleeps. “It felt like a bream but instead a nice small common broke the surface in the beam of my head torch. “Yessss, my first carp of 2017! “We were happy, the fish seem to be feeding!”

“After a nice photo we released this small but very welcome common back into the lake, everything was perfect. “Our friends left late that evening and soon after we were in our bivvies.”

“At about 3 o’clock in the morning my middle rod produced a nice run before the fish was snagged. “I went straight out in the boat and as soon I was over the fish he was free. “After a short fight I had a nice mirror in my landing net. Mario was also awake now and helped me to get the fish into the retainer sling. “At 33lb it was a very pleasing start!” 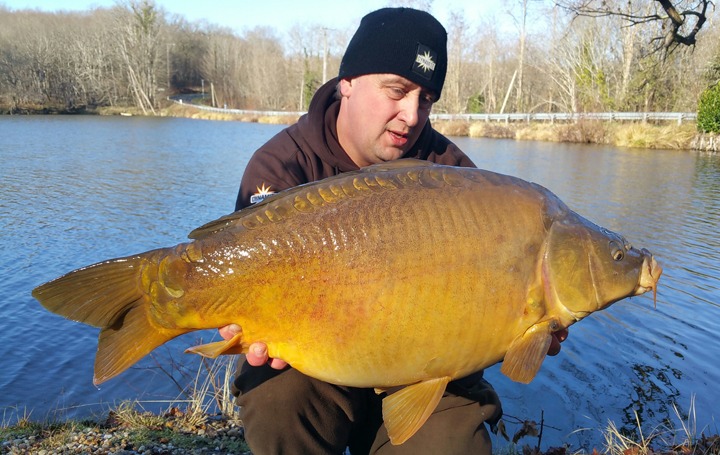 “Nothing else happened until the next afternoon when at about 2 pm my left hand rod on the other side of the lake produced an nice run. “The fish didn’t put up much resistance and was soon in my landing net, a nice 29lb common. “I was more than happy…awesome!”

“A warm and sunny day ended and before darkness arrived all rods were on their spots again. “The next morning arrived but with no action and we decided to leave our rods and not change anything until the next day. “Nothing happened that day and night, no action at all after 36 hours.”

“A screaming run on my right rod woke me up at around 4 am on Thursday morning and before long I had another small common in my net. “It seemed that the morning hours were the most effective.”

“At about 7 am I had another take on my middle rod. “The fish took line and fought very well, taking me nearly 10 minutes to get him into my net. “It was another nice mirror with big scales and 40lb+ too! “It was still a little dark so we decided to sack the fish. “After a couple cups of coffee my next rod screamed off, it was crazy…after 36 hours of nothing I had my third take that morning! “This time a nice looking long mirror of 47lb 5oz. Yessss…bingo…I’d said to Pete I just wanted to have one fish over 20kg+ and it had happened!”

“Nothing happened during the rest of that day or on the last Friday night but I did manage a nice looking mirror of 40lb on the last morning.”

“We left the lake about midday and I felt more than happy with the nice results I’d had. “I must also say thanks to Mario for a his great company and also to Pete and Shell for another great time at Murphy’s Lake”