This month Ian recollects a tough session in the heat at Old Mill Lakes before getting a result on his return to Wraysbury..

At the end of last months diary I mentioned that myself and a few friends were heading of to Lincolnshire for a 3 x day trip to Old Mill Lakes . On arrival we were greeted and shown the large dip tank to soak all carp care kit in.

This was left soaking whilst we had a walk around the lake. There were five of us on this trip and swims were soon sorted with myself at the very far end of the lake. Now the rules were a bit in my opinion old fashioned but rules are rules and if we were found to be breaking them we were told in no uncertain terms that we would be asked to leave.

Now I’m pretty sure my employers at Dynamite/Carpspirit would not be impressed if that happened so I started three very frustrating days fishing. The temperature was in the mid 30’s and for best part of the day the fish would be in the upper layers and yes of course Zigs were banned. But try we did.

I had taken with me five kilo of my absolute favourite Monster Tiger Nut boilies from the freezer range, yep you guessed it shelf lifes are banned. I had also wanted to take some worm and caster buy yet again they were banned as were maggots. Boilies were definitely our only option.

So we all got sorted and as the temperature dropped that first evening I managed a nice mirror from the middle of the lake were I saw it poke its head out.  The night was absolutely melting hot and had I fully zipped up my Eversest bivvy I would have woken up resembling a leper.

Although we were having a laugh, the days past slowly in the immense heat. I never received any more action but the lads all had one or two with Darren taking the prize with a stonking 32lb mirror which incidentally was a new PB for him. 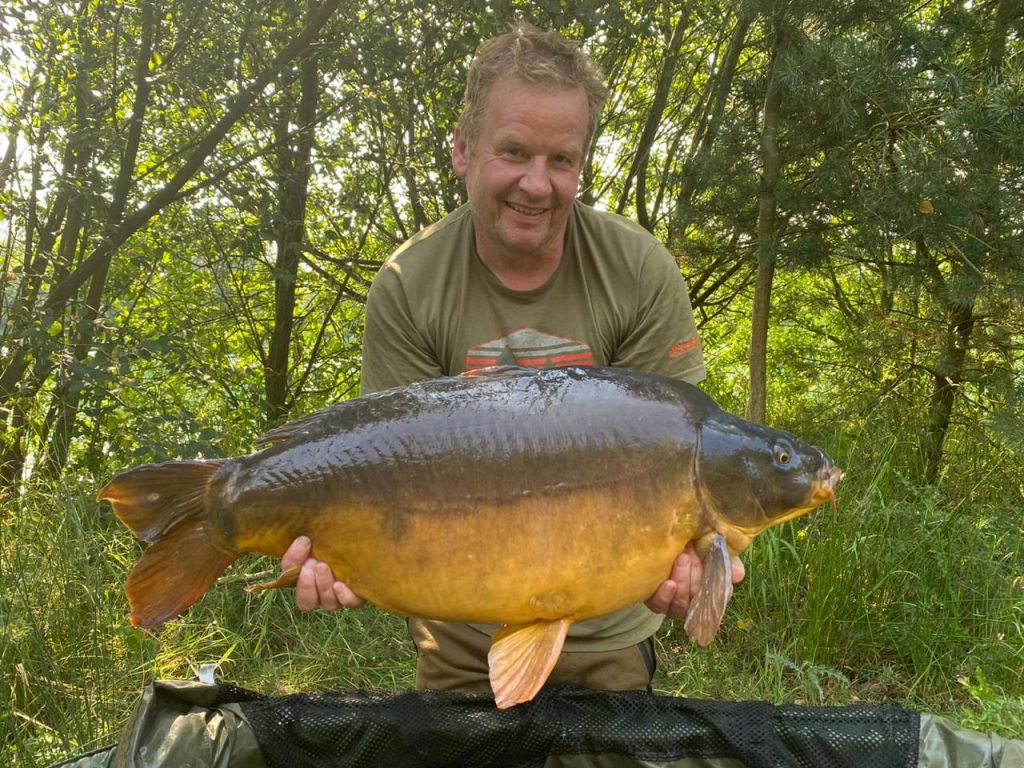 Darren and his new PB of 32lb from Old Mill Lakes

Tony took a PB common of 26lbs as well. Meanwhile John and his son William had four between them and eventually the trip ended and I was whizzing home again. I,m sure that’s the furthest north I have ever fished. 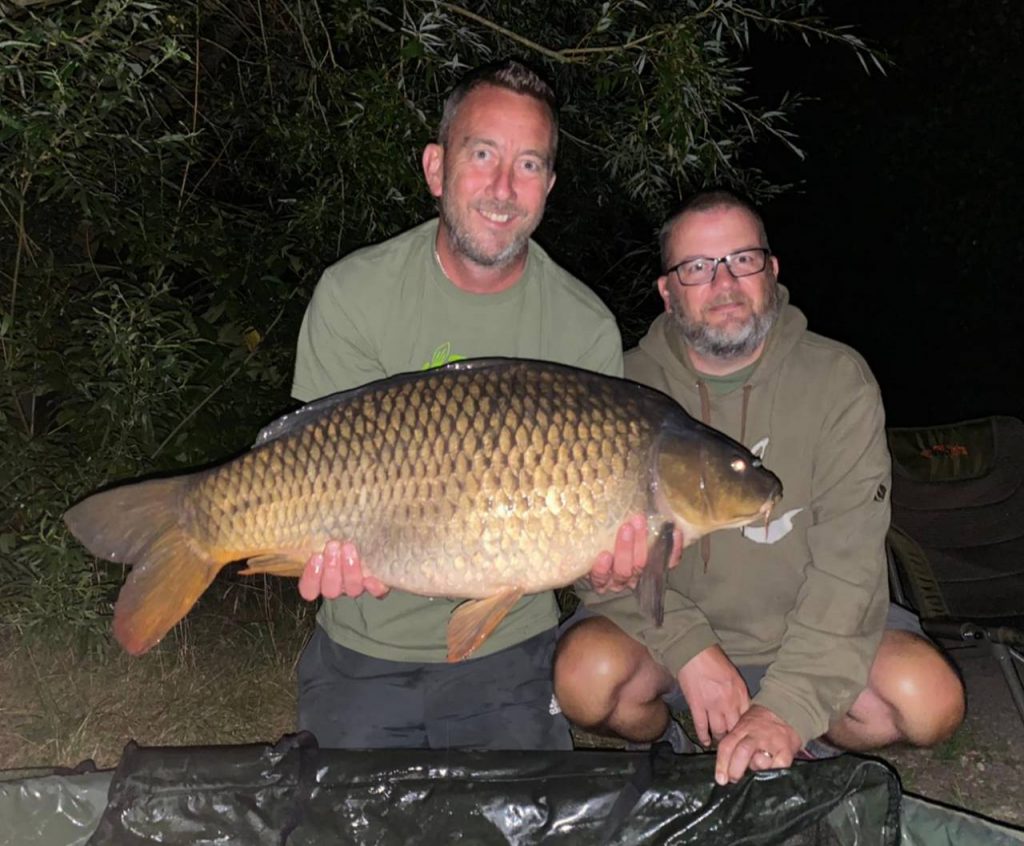 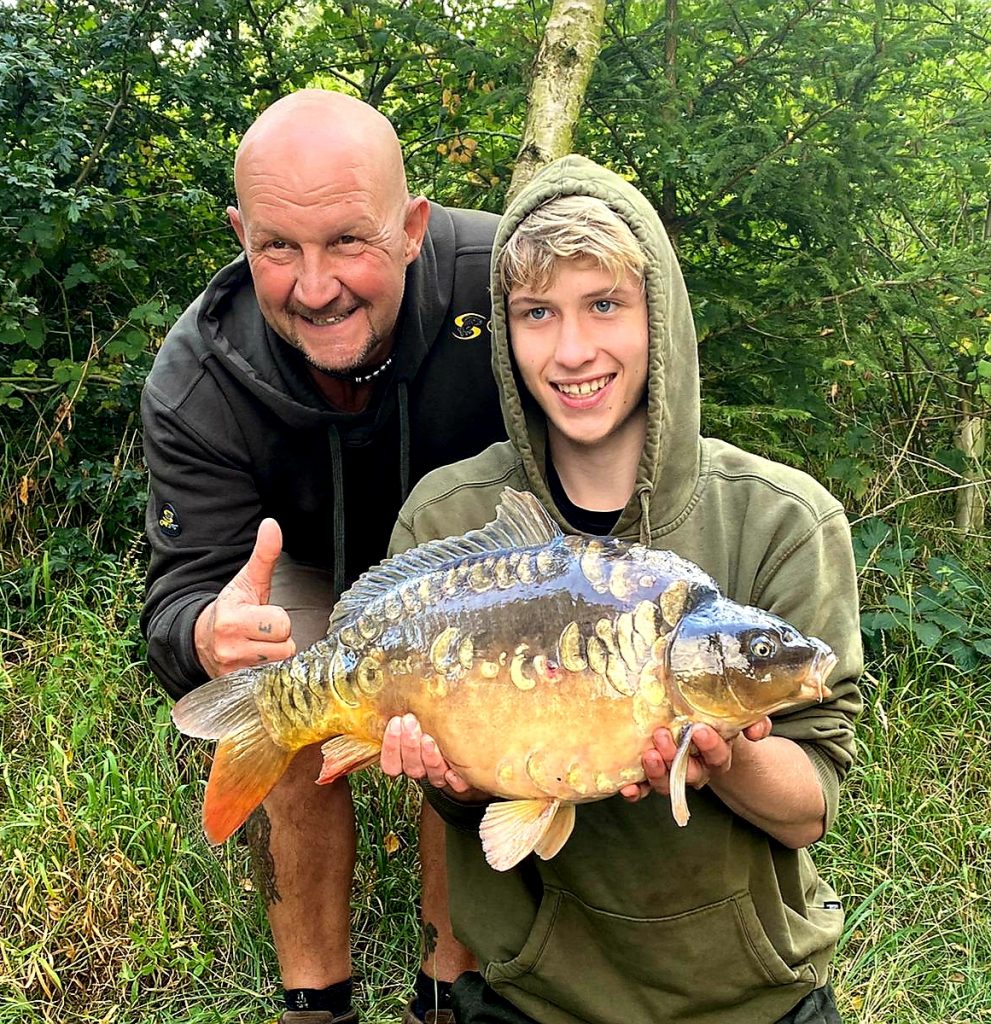 Young William and me at Old Mill

The next week I received a call from fellow Dynamite user and good friend Mike Franklin who was having a brilliant time on RK leisures Island Lake and he had just caught a 49lb mirror known ironically as Mikes Pet. Massive well done mate and keep putting that Monster Tiger nut bait in. 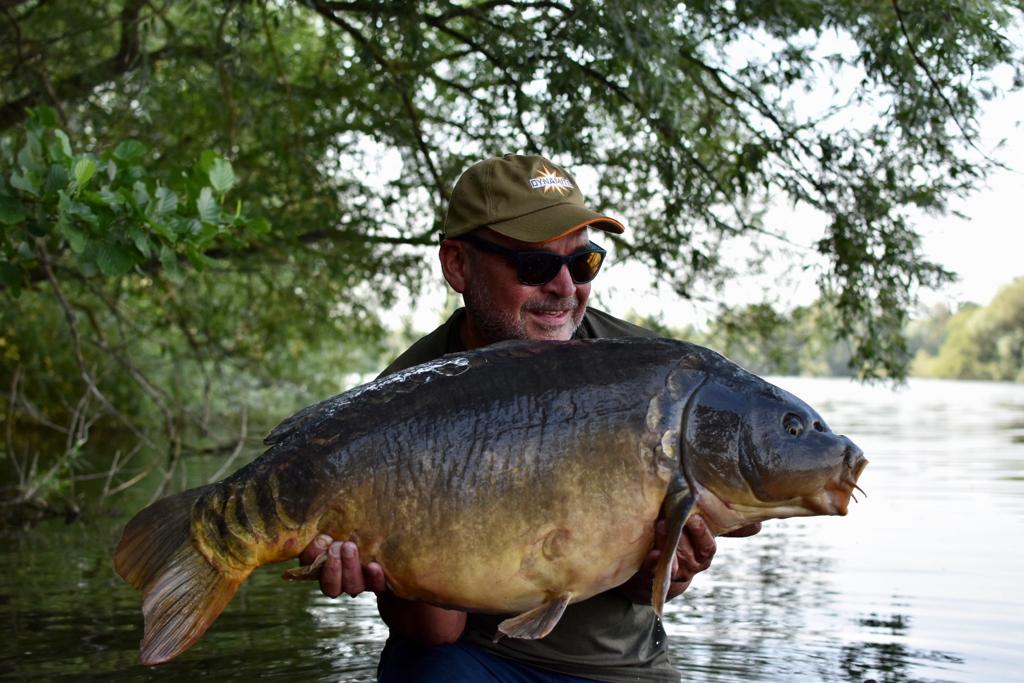 My next trip was back on RK’s W1 North Lake. I was really struggling to stay in tune with the lake as I had so much work on but kept nicking the odd overnighter when I could. Arriving early I had 24hrs ahead of me but on my first lap of the lake was greeted with all the very popular and consistent swims yet again being taken!

It does amaze me just how some lads manage to spend so much time on the lake and not at work. Anyway I needed a swim and Jason’s at least put me within a couple of hundred yards of some shows. The swim had a couple of islands either side of it at the 100 yard mark so these marked two spots. I baited these with just a couple of Spombs  of 12mm Monster Tiger Nut Shelf life boilies and a tin of Dynamite Sweetcorn. 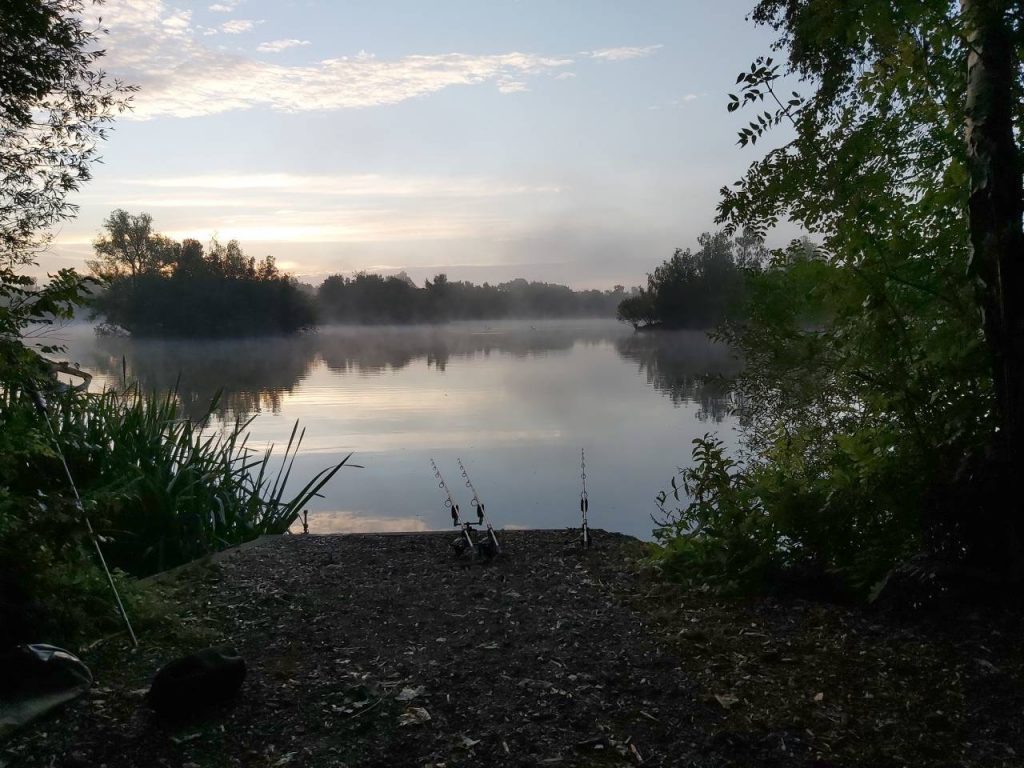 Over these were Size 6 Medium Curve Carp Spirit Razor point hooks on Ronnies with Pink Hit n Run 12 mm pop ups. The third rod was put down the left margin with the same over it. A few showed but still about 50 yards past the islands. The night was soon upon me and at first light one of the island rods pulled up tight. I was up and on it but pretty soon all went solid. This is where trust in your tackle comes into play. 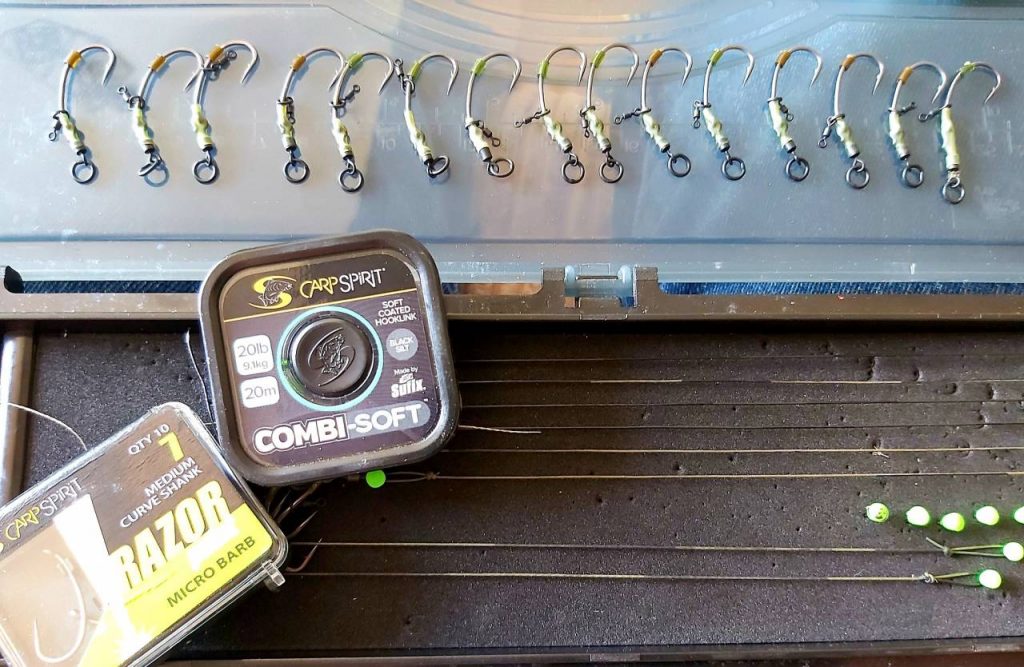 My Ronnie ready for action..

I have used the Carpspirit Magnum X5 3.5 tc Rods and 19lb Velocity line for a year now so had total faith in it.  Steady pressure brought a carp along with a massive amount of weed to the bank ever so slowly. 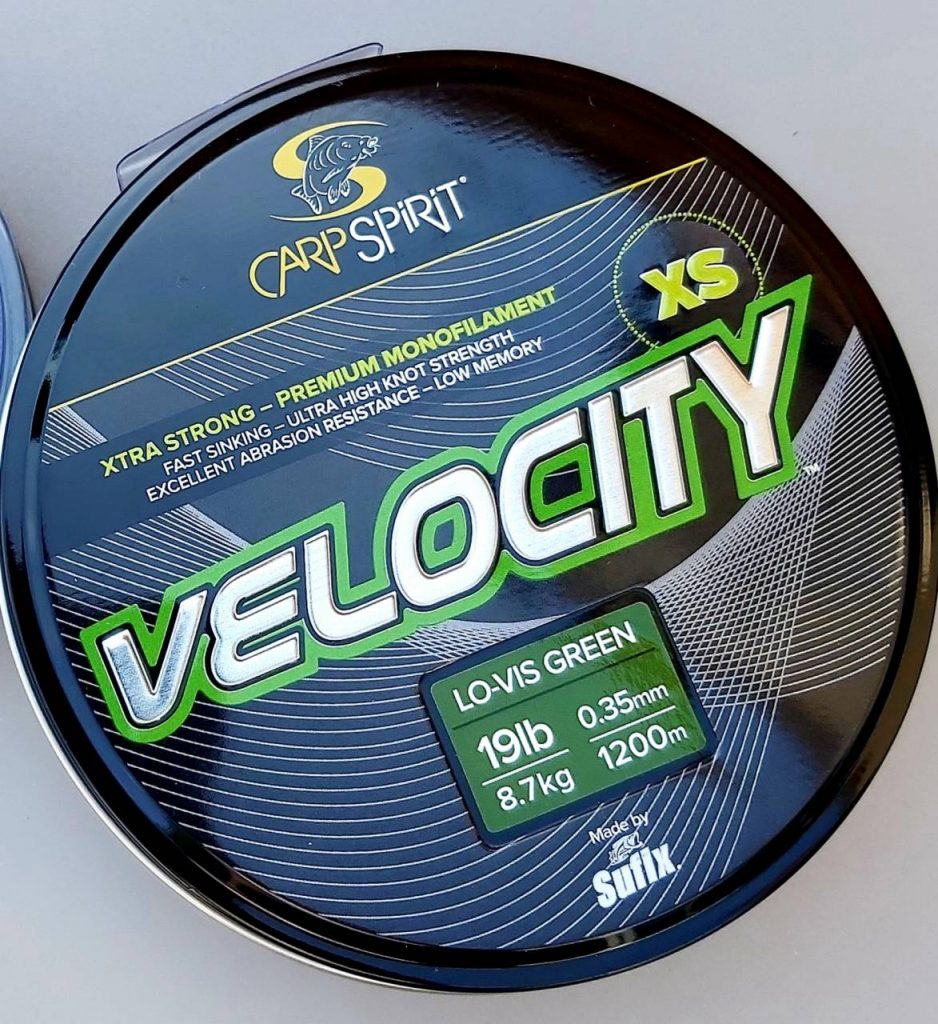 Another member helped net this mass and we scrambled to see a carp which at first looked a big twenty, but on the scales she made 31lb 8oz and was almost a linear. Chuffed was an understatement and my bruvva Matty clicked away a few pics for me. 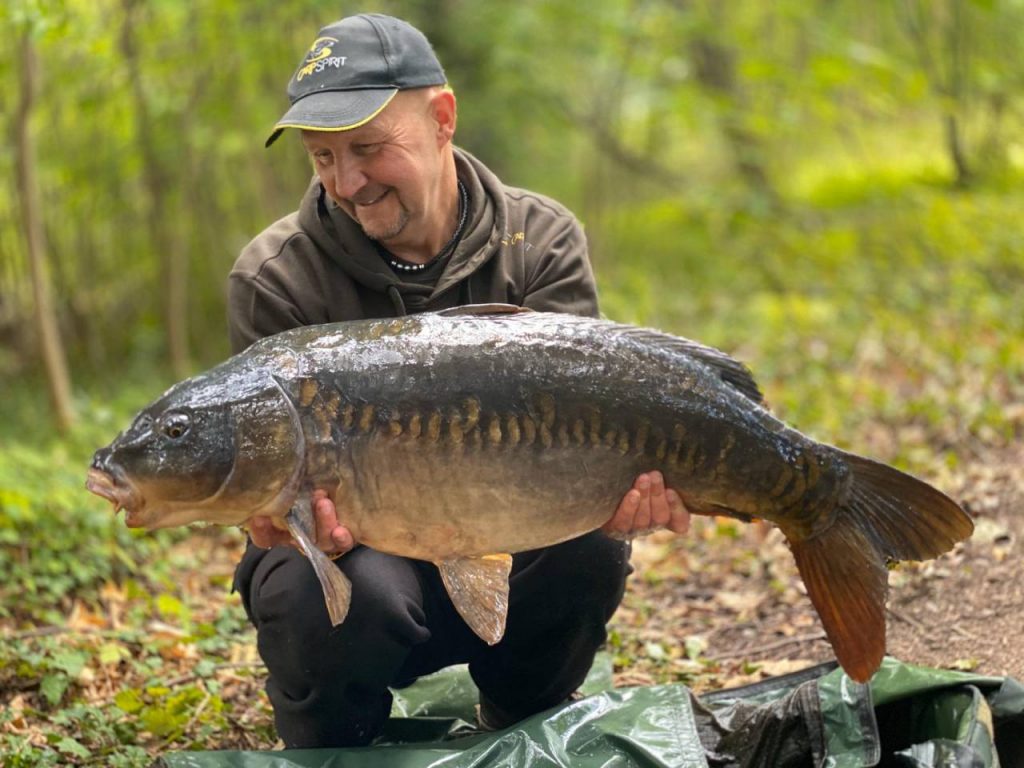 My 31.8 mirror from North Lake

I sat around most of the day as Joe Morgan came over to do some filming with me for his new YouTube channel and when he left the lovely Simon Pitt of the Korda Pod cast turned up for a type of interview / information gather of my life in preparation for my forth coming Pod Cast. Soon enough it was time to wrap it up and slip off home. See told you it was all work!

Till next month tight lines folks..