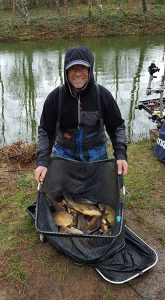 Good results
throughout the week

Competing against a field of 159 other top flight anglers, Nick’s combined total of 388lb 5oz put him 67lb ahead of second place rival, Sam Edmonds.

Although he recorded a couple of section wins and a lake win, he still needed a strong final day to ensure victory. « I started on bomb and bread, but only managed seven carp in the first three hours, » Nick reported.

« Cupping Green Swim Stim and Marine Halibut groundbait into the margins with an 8mm cube of meat fished over the top allowed me to transform the match as I landed over 120lb of ‘lumps’ in the last 90-minutes! « This gave me the strong finish I so desperately needed and I was able to claim victory. »

With 159 anglers competing for a podium place in this popular 5 day festival, a good result throughout the week was a must to stand a chance of winning…

Day 1
Peg 47 on Treewaters was Nicks home for the day and with the island just beyond the pole range limit combined with a difficult wind, Nick opted to fish the bomb and 8/10mm meat tight against the island. Catching steadily throughout the match, Nick managed to place 95lb on the scales for a lake win and a great start to the festival.

Day 2
Python lake, peg 35 was Nicks venture on day 2 and with this peg holding a great margin Nick opted to fish down the edge for the whole match. Kinder cupping Dynamite XL Sweetcorn combined with 6mm meat, he caught small F1’s and tench throughout the match and placed 25lb on the scales for another section win.

Day 3
Nick drew peg 46 on Bolingey lake and opted to fish 6mm meat on the short and long pole on the deck to catch a steady run of carp throughout the match to win his section with 75lb.

Day 4
Pollawyn lake peg 27 was a great draw for Nick as this is a noted area of the lake. Nick decided to fish Bomb and punched bread at the start where he managed to catch 2 carp early, then swapping to feeding 6mm meat shallow on the short pole, he managed a steady run of skimmer bream and the occasional carp. At the whistle Nick managed to place 91lb 2oz on the scales to claim second in the section, narrowly missing out on another section win by a mere 4oz!!! 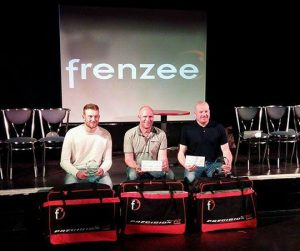 Day 5
With one day remaining Nick needed to draw a strong peg in order to stand a good chance of winning the festival, as a big weight was needed for him to overtake the front runners. Luckily he pulled out peg 14 on Twin Oaks lake which gave him a really good chance. The first few hours were really tough with Nick only managing 7 carp on the bomb and bread, but then he finally had the arrival of a shoal with some huge carp down the margin.

Feeding Dynamite Swim Stim Betaine Green / Marine Halibut groundbait mixed equally and using 8mm meat on the hook, Nick managed to bank over 120 lb of carp in the final hour, which boosted his final weight to 191lb. This was enough to win the lake and the festival’s top weight of the week, but more importantly it helped Nick overtake the front runners and claim the Individual Title of  White Acres Frenzee Champion 2017.