The Commercial National is the biggest team commercial fishery match of the year and one that I always look forward to as the buzz from the lads and around the fishery is always fantastic! 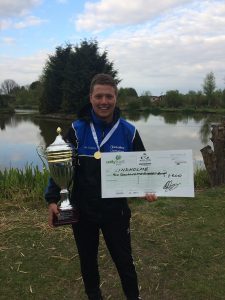 Alex with the trophy

Anyways on to the day and captain Ben Fisk was sent to draw. We’ve had a nice set of pegs but a couple of iffy ones thrown in as well. I’ve been handed peg 40 Willows on the point. I’ve fished a really simple match with hard pellets long short and down the edge. I had chopped some worms in case and mixed these with a bit of Swim Stim Amino Black to help bind the mix so it’d carry the bait to the bottom but I never felt the need to try it. Although I wasn’t bagging I’d caught steadily and managed a 4th in section. So good team points! Potentially I could of been 2nd as I only needed another kilo for this… but that’s the way it goes in this game.

Back for the results and it began to filter through the team had done well with several lads winning sections and the rest placing in the top half! It was a nervous wait for the results but it was announced we’d won it! It’s always fantastic to win but to win with a set of lads I fish with every week and to beat the likes of Barnsley and Dorking was fantastic!

So the task for next year is to try hang on to the trophy as I’m sure the Barnsley boys will be trying  their best to get it back!