As Andy explained “I’d been handed peg 6 on Lou’s which is a lake I’ve never fished before but speaking to a few people I’ve been told it was a right flier!” 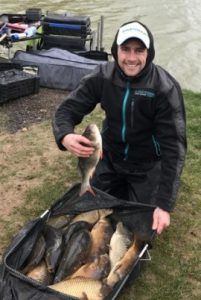 “I’d started my match on bomb and pellet casting tight to a reed bed on the far bank and after ten minutes I’d had 4 carp! “ I caught in good spells on this for two and half hours, catching 3 or 4 really quickly and then waiting fifteen to twenty minutes without a bite. “This started to slow so I went on my 14.5m pole line where I’d been feeding 6mm Dynamite XL hard Carp Pellets with a hair rigged 6mm banded pellet and caught on this line until the end. I ended up with 56 carp to 8lb for 87kg 200g (191lb) to win the match.”

“A brilliant days fishing in such wild conditions and to top it off my team Drennan Barnsley Blacks won on the day, an awesome result for lads who have all put a lot of time and effort into practicing for the event”

Chris reported “It started slowly for me, I started on the bomb and it was very windy from left to right. “I was the last to catch with some anglers already landing 3-4 carp each. “I only had my first after forty five minutes and then had 5 quite quickly after. “There was a lull mid match so I switched to a small pellet feeder with Micro pellets and 6mm banded pellet and caught 7 more. I ended the match with 19 carp to 13lb, 3 barbel and an F1 to finish with 65kgs 550grams.