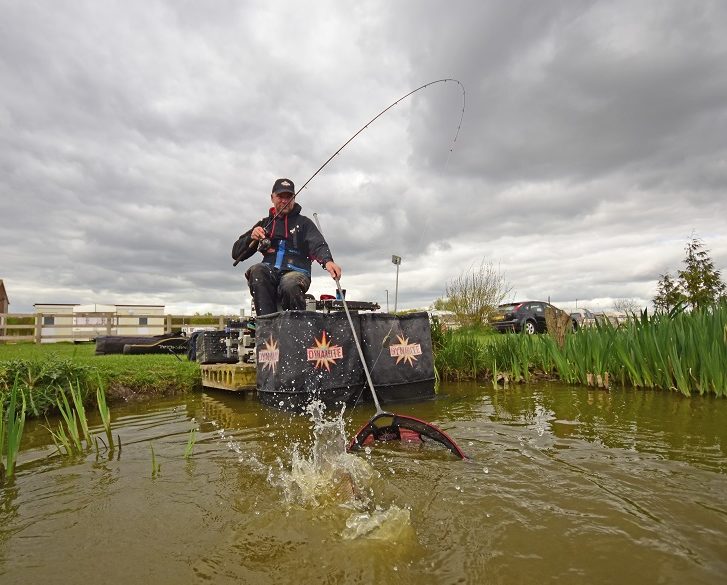 All anglers at some point have used the Method. And, as a tactic, it’s devastating fish-catching capabilities are well-documented. It has even been adopted by the specimen world in recent years. But, even though you can buy bespoke Method mixes and purpose-made loading moulds, match-angling legend Nick Speed reckons most anglers are still getting the basics wrong.

„As a full-time angler and coach, I see people making inherent mistakes, every time,“ Nick said. „Getting the basics right isn’t difficult, but it will make such a massive difference to your catch rate.“ To find out more about these common mistakes, Dynamite Baits‘ Media and Marketing Assistant, Mark Parker, joined the 46-year-old Sheffield-based rod on the banks of Lindholme Lakes‚ Bonsai Lake where he ran us through how to ‚master the Method’…

Before you even cast, you need to address your set-up. For Nick, this starts with the rod. „You ideally need a feeder rod with a soft action as this will help cushion the fight of the fish,“ he explained. As you’re looking to make well in excess of 200 casts in the day, a robust, durable mainline is also a must. Around 0.22mm (6lb to 8lb) is perfect. The next thing in the chain is the Method feeder. Faced with a cast of only around 20 yards to the margins of an island, it came as quite a surprise to learn that Nick uses a small, but heavy 30g feeder. 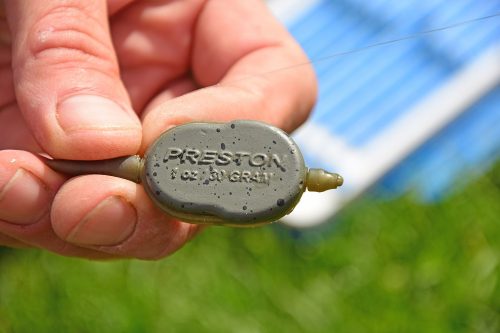 „The reason I use a small feeder is that just like the pole, I am looking to adopt a little and often feeding approach,“ he told me. „Anglers think to catch a lot of fish requires the use of a big feeder. Actually, it is better to use a smaller feeder and cast regularly.“ This way there is less loosefeed to possibly pre-occupy the fish, plus, by casting with more regularity Nick reckons you actively encourage more fish into your feed area, which leads to more and quicker bites. „Regards the heavy weight, for such a short cast, the motive behind this is threefold,“ Nick explained. „The first is that of contours. I’m casting to the slope of an island, so I want a heavier feeder to grip to the sides of the slope. If the feeder moves, you are essentially fishing with a single hookbait. „Secondly, a heavy feeder casts better and finally, in line with fishery rules, I’m fishing the feeder free running. So, the extra weight helps massively with the bolt effect. „Many anglers think that it is the tension on the quiver tip that sets the hook, but it is the combination of a short hooklink and the heavy feeder that pulls the hook home.“ Regards feeder weight, Nick thinks nothing of going up to 45g if there is a strong side wind, which sounds ludicrous over a 20-yard cast. „Only if the silt were very soft would I use a 15g or 20g feeder, so it lies on top of the silt,“ he added.

The final part of Nick’s set-up is the hooklink and hook. Again, in line with many fishery rules, he uses a four-inch hooklink of 0.14mm (4lb) to 0.16mm (5lb), but, if allowed, in the summer he will go even shorter, so the bolt effect is magnified. The hook is a size 16 for fishing a banded 6mm Robin Red pellet or an 18 for a single dead maggot hookbait „When fish feed on the Method, they are not after the hookbait necessarily, they simply come into contact with it as they look to slurp up the feeder’s payload,“ the Dynamite Baits‘ backed matchman continued. „This means they are sucking the bait in from a distance, so you need to use a light but strong hook, so the hookbait flies up into their mouth at the same time.“ 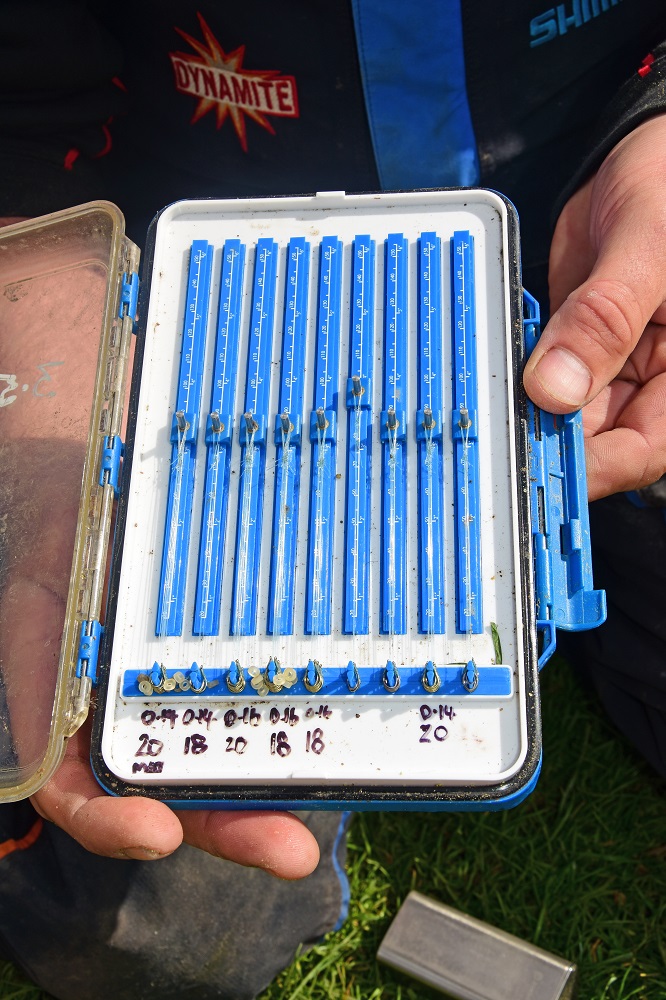 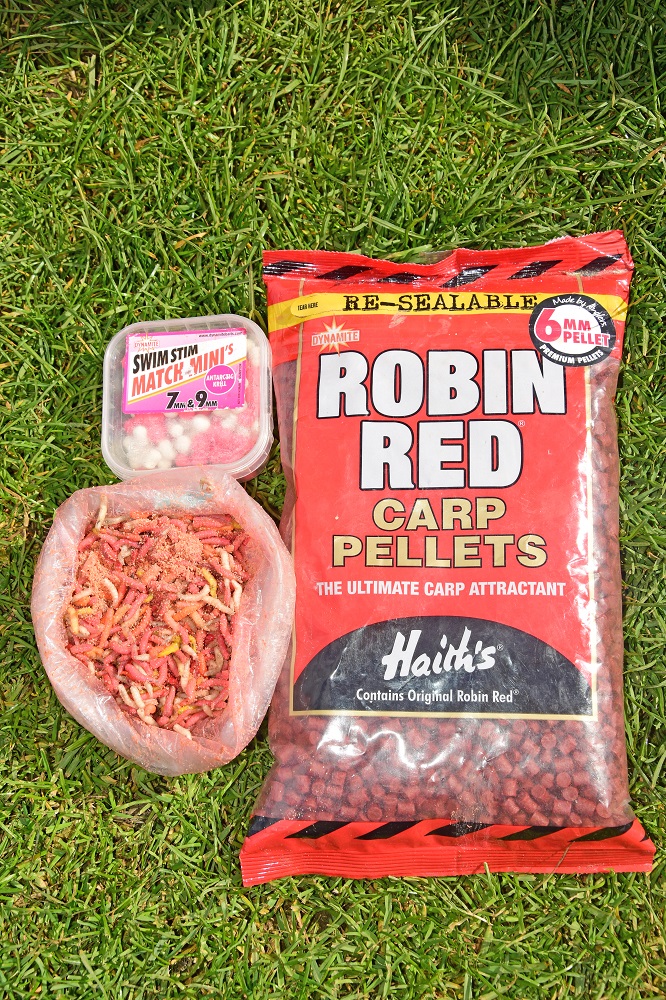 Nick’s choices of hookbaits for the Method

Another important factor that many anglers get wrong is the mixing of their groundbait. Usually they get the consistency wrong, complaining that it tends to stick in the mould, not binding correctly to the feeder’s frame. „This is usually because they have mixed it too wet,“ Nick said. „I have a way of mixing my Method groundbait, which makes it fool-proof.“

To mix Nick’s loosefeed, he starts by emptying a pint of Green SwimStim and a pint of Marine Halibut Pellet groundbait into a bucket, before a handful of fishery micro pellets are added. 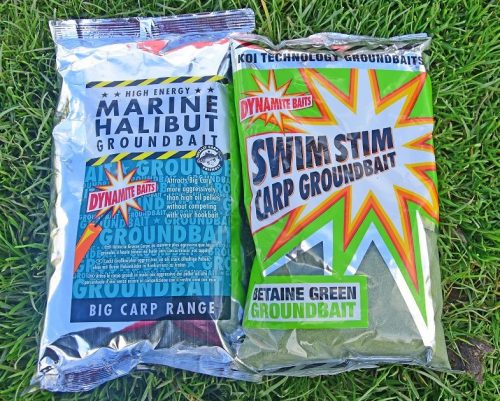 Using a 200ml pole cup, he adds two full cups of lake water (400ml in total) before giving the concoction a good mix. A lid is then placed on the top to avoid the groundbait drying out too quickly. It’s then left to sit for a few minutes to fully soak. „I will also use an atomiser with a little liquid flavour added to fine tune it as it dries out slightly over the session,“ he continued.

The reason Nick uses the two groundbaits is that the Halibut adds weight to the mix and prevents it breaking down too quickly in the water, while the Green SwimStim is added to colour the finished product, so it more closely matches the tone of the lake water.

How to create Nick’s Mix 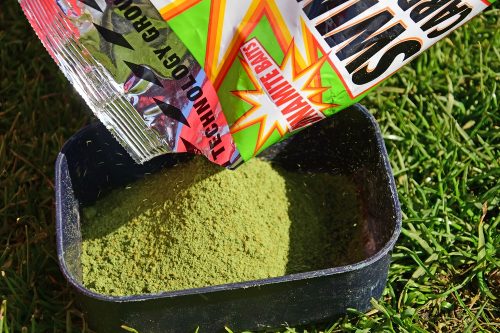 Step 2: Pour the dry groundbait into a large bucket and mix them 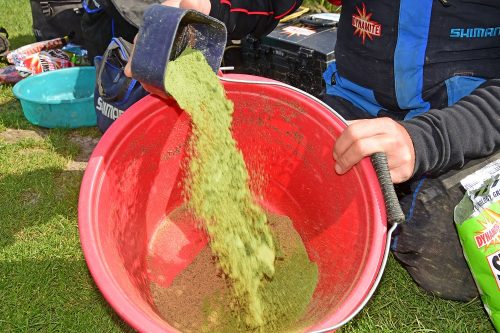 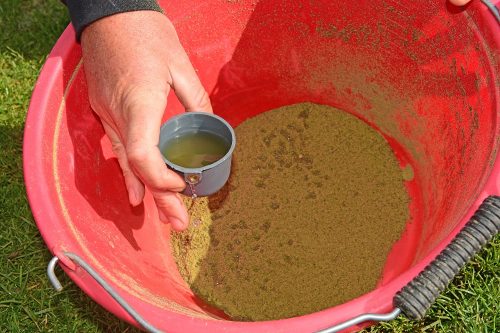 Step 4: Mix thoroughly until a nice consistency is achieved and then push through a riddle to remove any lumps 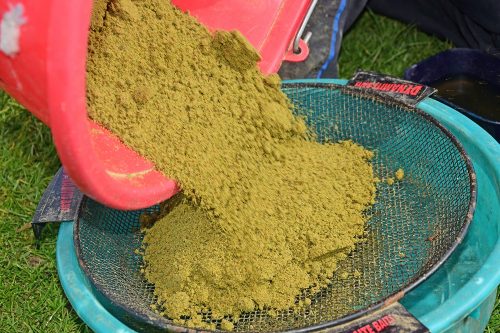 Step 5: The finished groundbait should have a very fine pouring texture 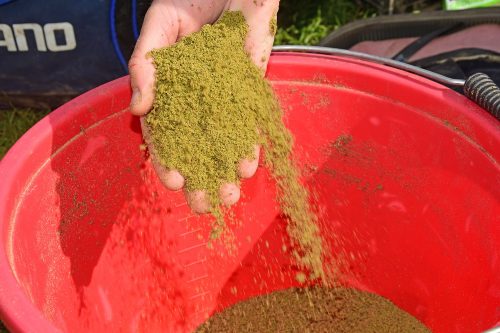 Step 6: Remove what you need for a session and place in a spare tub, covering the rest of the groundbait in the bucket to stop it drying out 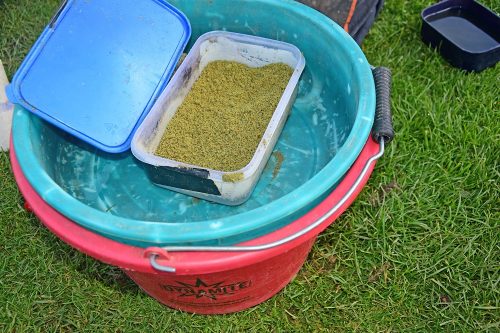 Step 7: Add a handful of micro pellets to the finished groundbait 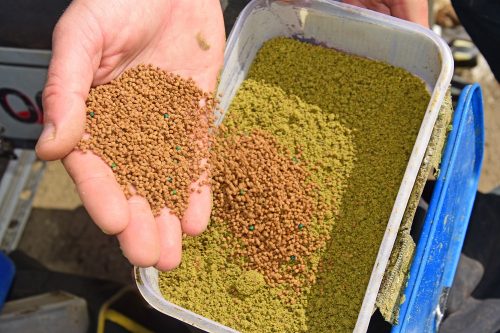 Step 8: Use an atomiser with some water and liquid flavouring to keep your mix dampish throughout the day 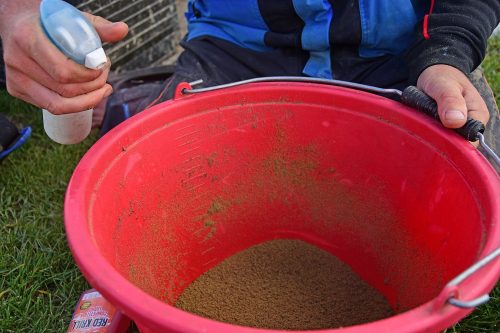 For Nick, this is possibly the most important part of successful Method feeder fishing. The feeder needs to be correctly loaded so that the hookbait sits central on the feeder when the payload starts to breakdown on the lake bed. „I start by putting a little groundbait in the base of the mould, followed by the hookbait, which I place in the centre,“ Nick told me. „The mould is then filled to the top, before the feeder is pushed firmly down to pack it. „If it is loaded correctly, you shouldn’t see the hookbait, but within seconds of the feeder being on the lake bed, it should be revealed ensuring it’s one of the first large particles the fish encounter. „Don’t put the hookbait in last or even worse, leave it hanging out of the ball of loosefeed altogether, which I see a lot. All that happens here is the groundbait breaks down and draws the fish, but the hookbait is four-inches away. The result is line bites but no fish. Very frustrating.“

The final part of Nick’s Method masterclass was how to fish it correctly. Within the first 30-minutes to an hour, Nick reckons you should be casting every two-minutes to quickly build the swim.

Even if you’ve had no bites, keep going, the fish will come! Casting close to the margins of the island opposite, Nick always feathers the cast, just prior to the feeder hitting the water. This ensures that the feeder’s lead side hits the surface first, protecting the payload. „You’ll also notice that I don’t tighten up to the feeder, but that I fish a slightly slack line,“ Nick explained. „This is because the fish will knock and attack the feeder once it is in the water. By having no tension on the mainline, there is less likelihood of the feeder being moved when this happens „The only indication I get at the rod tip, is when a fish has taken the hookbait and is bolting out of the swim. „Although these few tips are only relatively small change in the scheme of things, by mastering them it will make an enormous difference to the results you get from your Method feeder fishing.“Believe me!“ 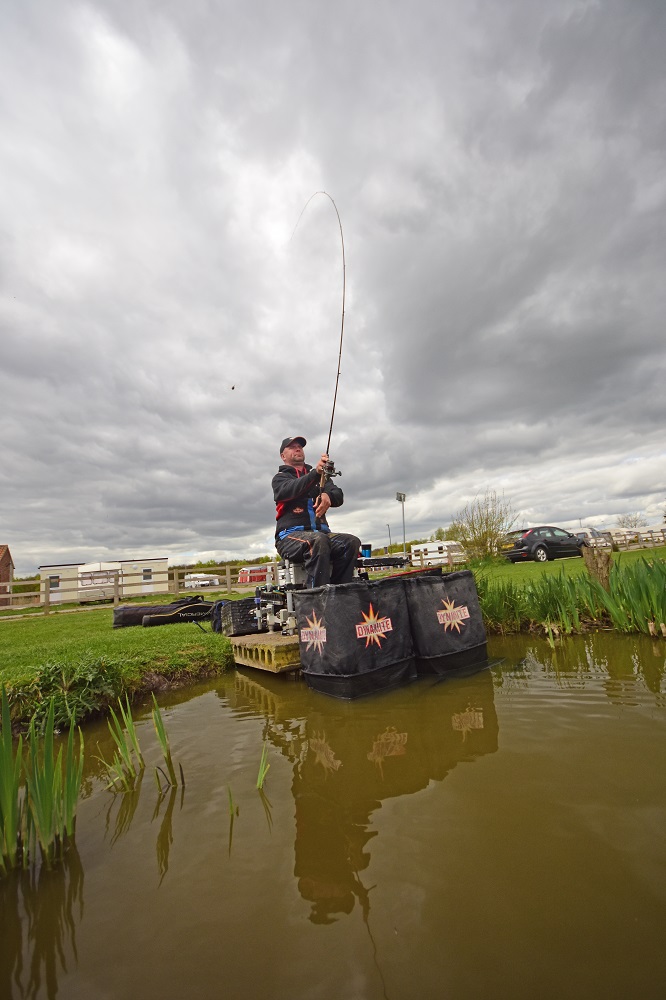 How often should you recast the Method? Nick does it every 2 minutes in the first hour.. 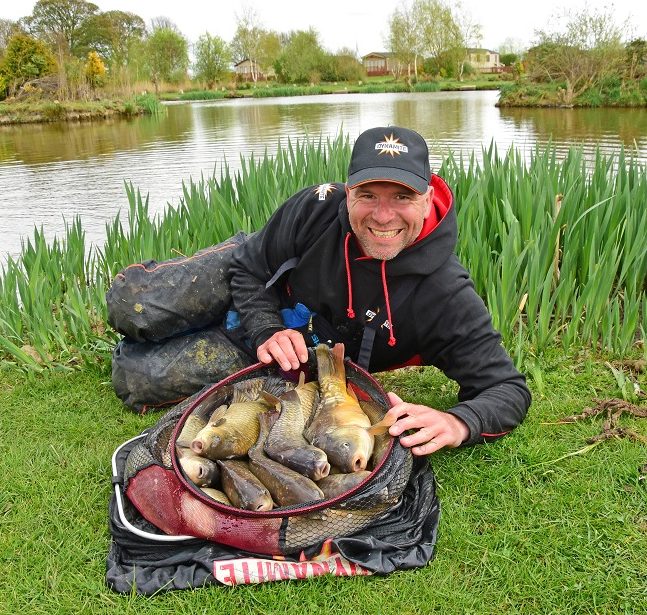 Get the Method right and it can be devastating on all venues..