Specimen match carp fishing is a wonderful if slightly weird world! It’s an incongruous mix of highly competitive spirit and respect from all those participating.

The mockery and ‚micky-taking‘ flows as freely as the beer and the hog roast served up to all the competitors on the Thursday night, during the pre-match social. A true testament to ‚carp anglers in arms‘ it seems. It’s a time to meet many new friends and rib old ones about their intended tactics and how, ‘you‘ are going to beat them into submission with the bait you’ve brought and the tactics you’ll be employing over the weekend!

If you have never competed in a carp match before and you have a competitive streak perhaps it is something you should think seriously about.

„I love this time of the competition,“ Dynamite-backed angler, Matt Eden said.

„You get to see lads that you don’t often see, as you’re on different waters/syndicates or just from different parts of the UK.”

„It’s a time to wind people up and get the banter going. Even though it’s obviously a serious event, having a laugh and a joke is all part of the fun and enjoyment.”

„Plus, who wouldn’t want to spend a few days fishing at a place like this?“ 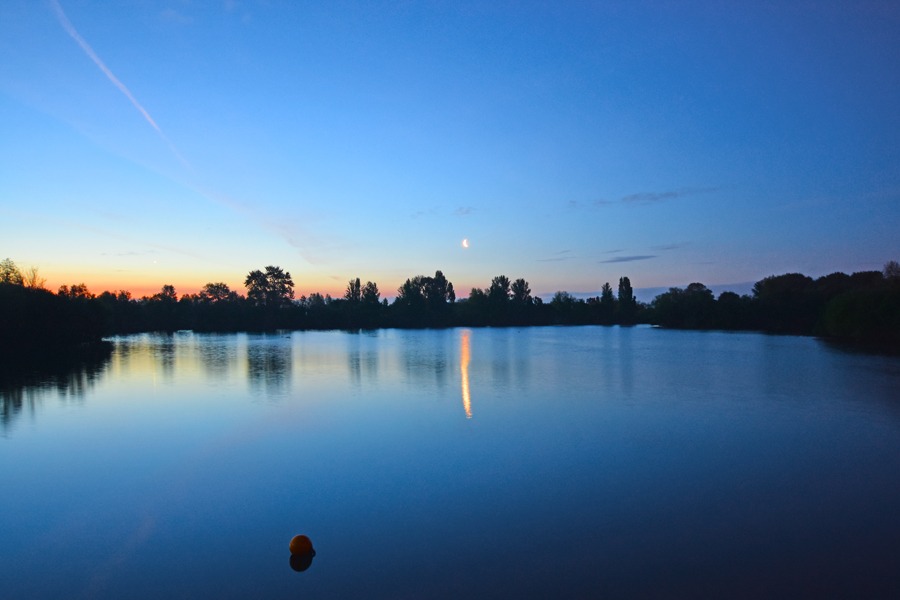 With the World Carp Classic UK Qualifier being held this year on the legendary Wraysbury South Lake, Matt’s comments seemed to speak for all. In carp-fishing terms, Wraysbury needs no introduction. Home to ex-British carp record, Mary, it is a venue that is beyond iconic. It’s hallowed banks having been trod by some of the greatest names in the sport – Terry Hearn and (Sir) Pete Springate to name but two.  But, since the take-over by RK Leisure, it has stepped into another league completely. Split into two lakes – North and South – the jewel in Wraysbury’s crown is undoubtedly its palatial fishing lodge, somewhere akin to a five-star resort. 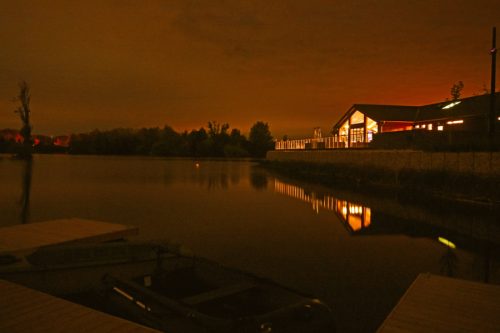 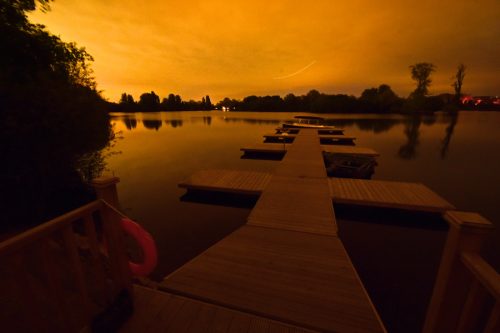 „If you never fish anywhere again in your life, you have to fish at Wraysbury just once!“ Matt continued. A sentiment felt by all during the Thursday night social.

By Friday morning though, the banter had turned to steely-eyed determination as the lads drew swims. Some would be happy, some not so. But, would those initial feelings manifest themselves come Sunday morning, when the ‚all out‘ horn would blow and the victors were named?

At 2pm, Tournament Founder, Ross Honey and Dynamite Bait’s Head of Marketing, Daryl Hodges sounded the start horn and for the next few minutes it was all hands-on-deck. Every angler on the complex was either marker floating, spoding, catapulting or baiting up boilies with a throwing stick. When it comes to this type of event, any seasoned competition angler will tell you that there is no time to waste. Time is a thief and before you know it, the two-days that only moments ago seemed to stretch endlessly in front of you are gone in the blink of an eye.

For the victors, the prize would be something twice as sweet as sugar and ten-times sweeter than cash. A coveted place for two in the WCC final on Lac de Madine, France. Held from 8th to the 16th September, as well as a rake of top prizes kindly donated by the various sponsors – Dynamite, Carp Spirit and Lowrance to name a few.

With quite a few fish coming out in the first few hours, it was the lads on peg 18 – Chris Wilds and Tom Ison – who enjoyed a dream start – having six-runs but only landing two. 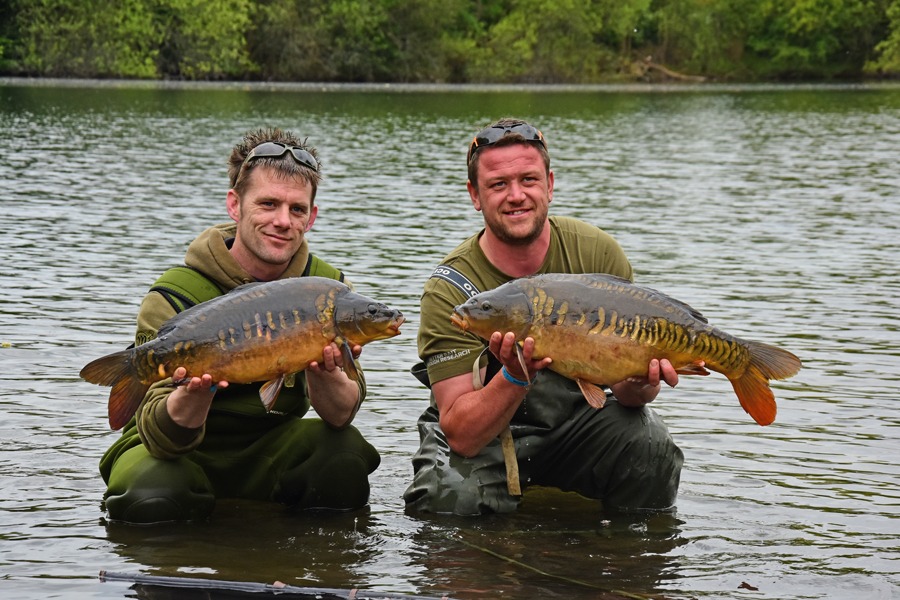 Tom and Chris with a brace

Rather than the traditional total weight rule as per the last few years of WCC finals the WCC qualifier results work by totalling the three biggest fish, regardless of the number caught throughout the weekend.

„It was an idea I had around four-years ago,“ Ross explained. „I was never wholly happy with the total weight rule, as even on the larger venues there were always a few hot swims, whilst others were not so good.“ I found that those anglers who had a poor first 24 to 30 hours were thinking of packing up early as they realised they had no chance of catching up the competition leaders. So, to create a much more ‚level playing field‘, I started the three biggest fish rule and the anglers seemed to like it. „It immediately changed everything. The competition remained exciting and tense right up to the end horn sounding. „Even those struggling initially knew that a late flurry of fish would put them right back in contention, if not the new leaders! „Having trialled the rule on the 2014 UK event, I rolled it out across the rest of the qualifiers as well as the final. The really brilliant thing was the complete acceptance and embracing by all the competitors – seasoned and inexperienced alike. What it means is, anyone who fancies giving the event a go, effectively has as much chance as someone who’s fished them for years.“

By 10am on the Sunday, what was predicted to be a ‚highly successful‘ event, hadn’t failed to disappoint. A total of 232 carp had been caught, including a stunning mirror, just over the magical 30lb mark, caught by Tom Ison. A fish that was one of the three that allowed the Lincolnshire-based anglers to take the victory. In fact, the lads on peg 18 had enjoyed – or should that be endured, an incredible 51 runs with 42 fish landed over the 42-hour match! Not surprising, both looked as exhausted as they did elated with their win! 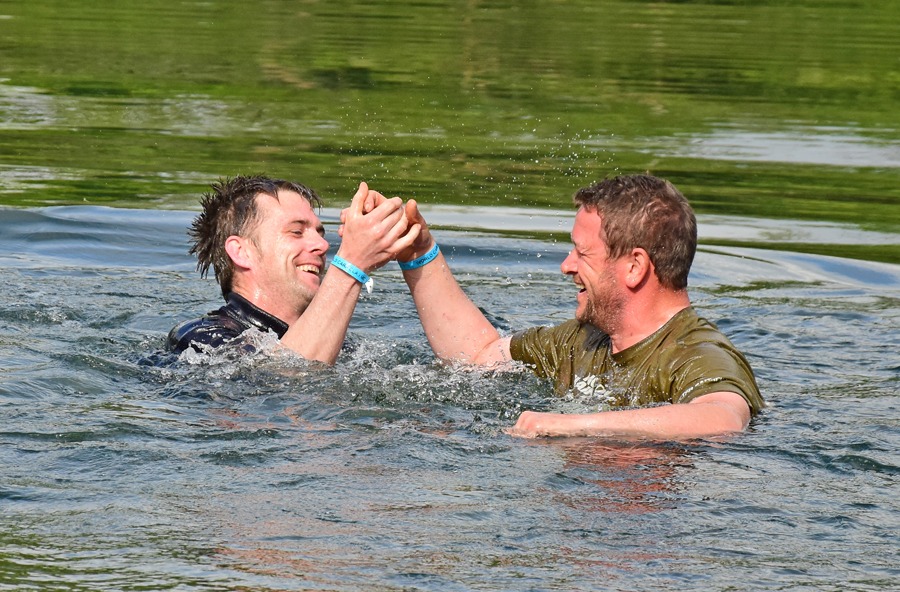 „It has been a great privilege to be allowed to be the first ever organiser to run an event on the famous South Lake,“ Ross concluded.

„But, even though I am the Event Founder, without the enthusiasm and willingness of the marshals, the venue and the various sponsors, like Dynamite, Carp Spirit and Lowrance, to name a few, the competition would be a shadow of what it has been and has become.”

„For anyone that hasn’t fished or witnessed a WCC, it is something I would tell them to really consider – the pageantry, banter, great fishing and the sublime venue and surroundings are something money can’t normally buy.”

Well done to Tom and Chris and a big thanks to all involved – here’s looking forward to a great and exciting final in Madine!

The WCC in numbers

232 – the total number of carp caught

16 – the average size of the carp caught, in pounds

50 – the number of competitors

14 – the number of pegs who caught at least one carp

19 – the number of years the WCC has been running 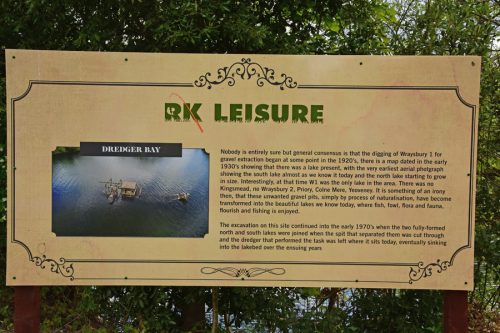 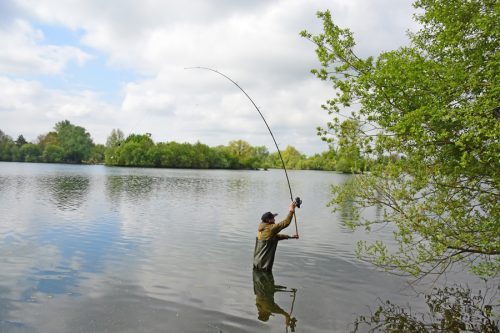 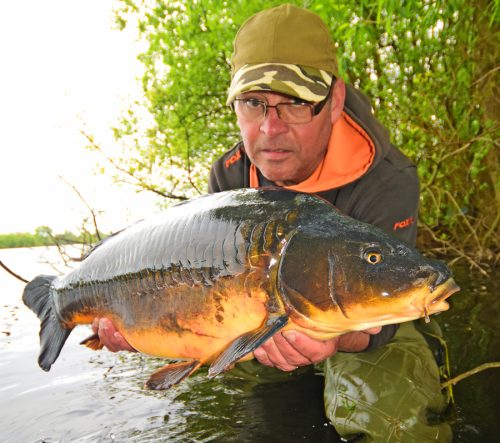 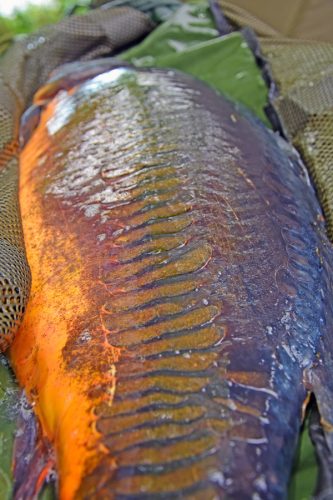 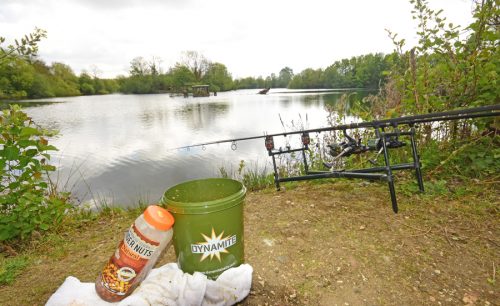 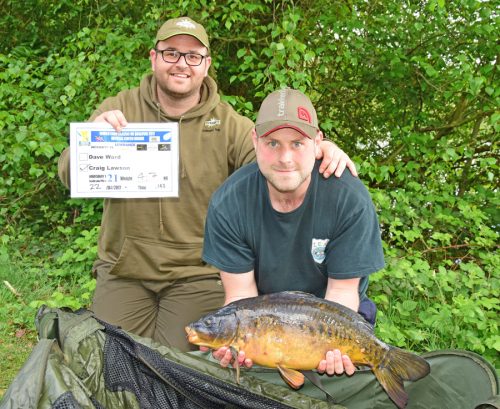 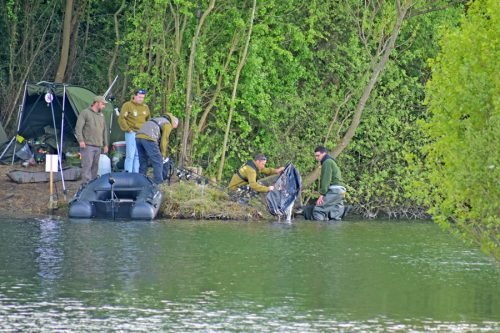 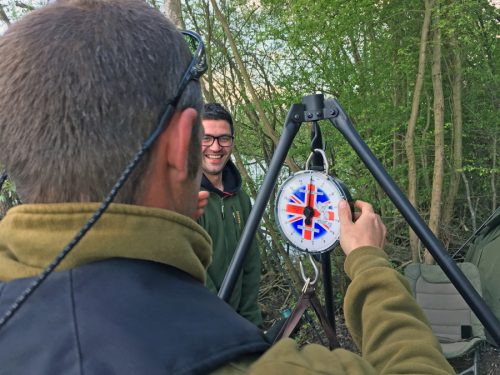 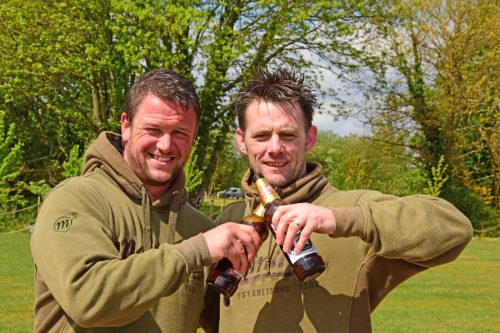 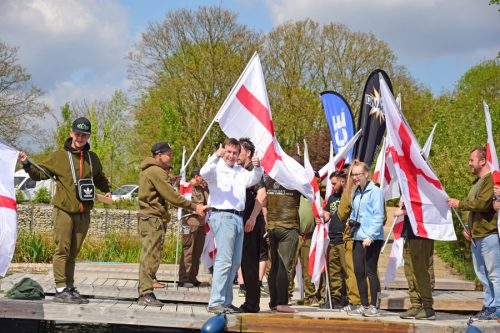